Caribbean Poems on the Underground

In June and July 2018 Poems on the Underground is a celebration of Caribbean poetry. 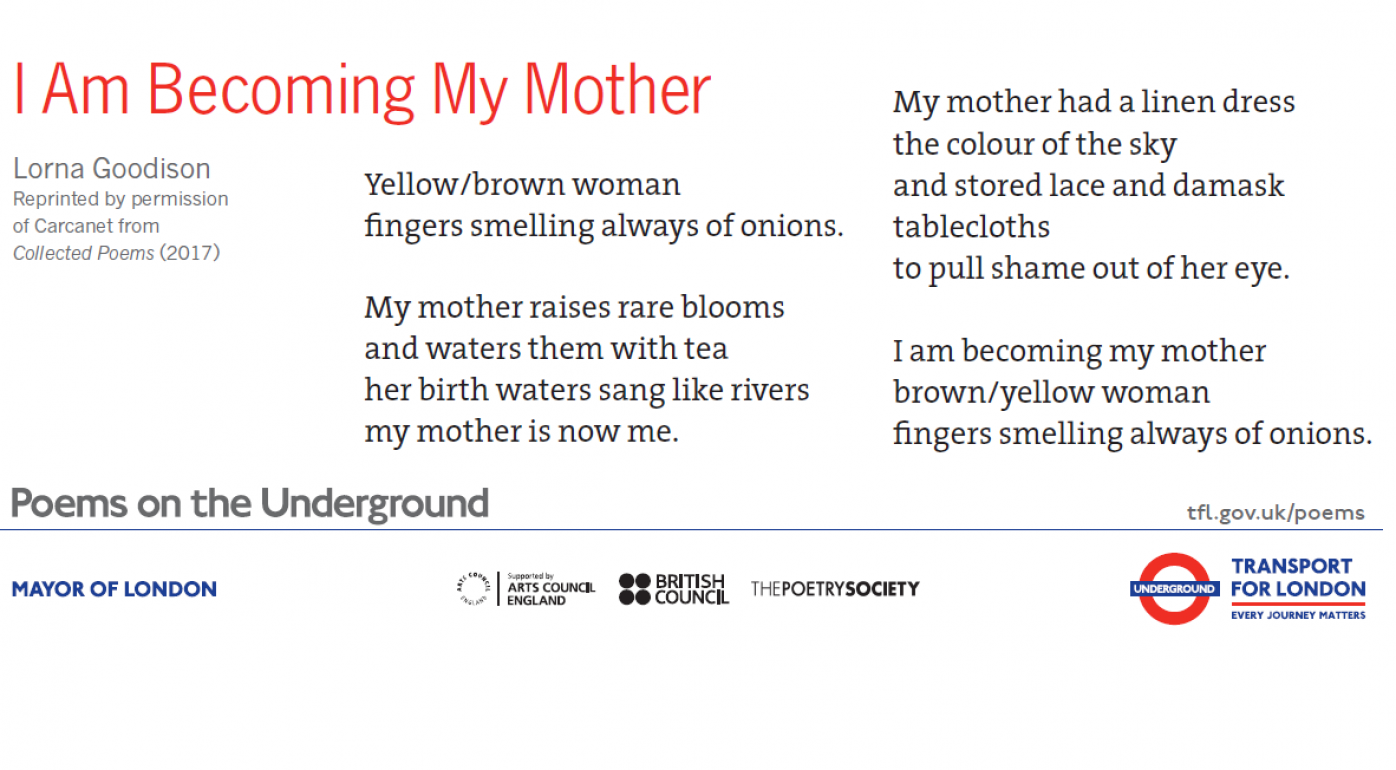 Lorna Goodison, Reprinted by permission of Carcanet from Collected Poems (2017)

Poems by six Caribbean poets will appear in London tube carriages this summer as part of a special new set of Poems on the Underground.

On the occasion of Windrush 70, poems by James Berry, Andrew Salkey, Jean Binta Breeze, Lorna Goodison, Kwame Dawes and Grace Nichols will be displayed on London Underground trains for four weeks in June and July. The poems featured in the series are:

James Berry spent his childhood in a village in Jamaica, and came to Britain in 1948, working as a telephonist and publishing several volumes of poetry for adults and children. He edited the first collections of poems by British/West Indian poets, and was a much-loved figure as poet and reader.

Andrew Salkey, raised in Jamaica, later attended the University of London and became part of the London community of emerging West Indian writers as author, anthologist and editor. He contributed to the BBC as an interviewer, critic, and author of many radio plays and features.

Brought up by her grandparents in rural Jamaica, Jean Binta Breeze studied at the Jamaican School of Drama and is a popular poet and performer both in Jamaica and England, where she has lived since the 1970s. Her most recent collection is The Verandah Poems.

Recognised as one of the Caribbean’s leading writers, Kwame Dawes has written over thirty books. His collection Wheels includes a series of poems paying homage to the people of Haiti after the earthquake of 2010.

I Am Becoming my Mother by Lorna Goodison

Born in Kingston in 1947, Lorna Goodison is a much-published poet, short story writer, and artist. She taught at the University of Michigan, and now divides her time between Canada and Jamaica, where she has recently been appointed Poet Laureate.

Born in Guyana in 1950, Grace Nichols has lived in Britain since 1977. A prize-winning poet, children’s author and novelist, she is widely recognised for her inspiring readings and the range and charm of her writings.

Poems on the Underground is supported by Transport for London, the British Council and Arts Council England. Originally launched in 1986. its aim is to bring poetry to a wider audience. It has recently become a National Portfolio Organisation. Poems are selected by the writer Judith Chernaik and poets Imtiaz Dharker and George Szirtes.

Posters, designed by Tom Davidson, are available from the Poetry Society, London Transport Museum, the Poetry Library at Royal Festival Hall and The British Library, in connection with their Windrush exhibition, open free to the public through September.

@SundayA_London Next Sunday, we welcome #poemsontheunderground co-founder Judith Chernaik to tell us why poetry is worth sharing -… https://t.co/aL7FFao8qi
(1 days ago)