What We Are Reading: An Empathy Day Special

In the lead up to Empathy Day on 12 June, members of the British Council Literature team talk about books that helped them see the world through other people's eyes. 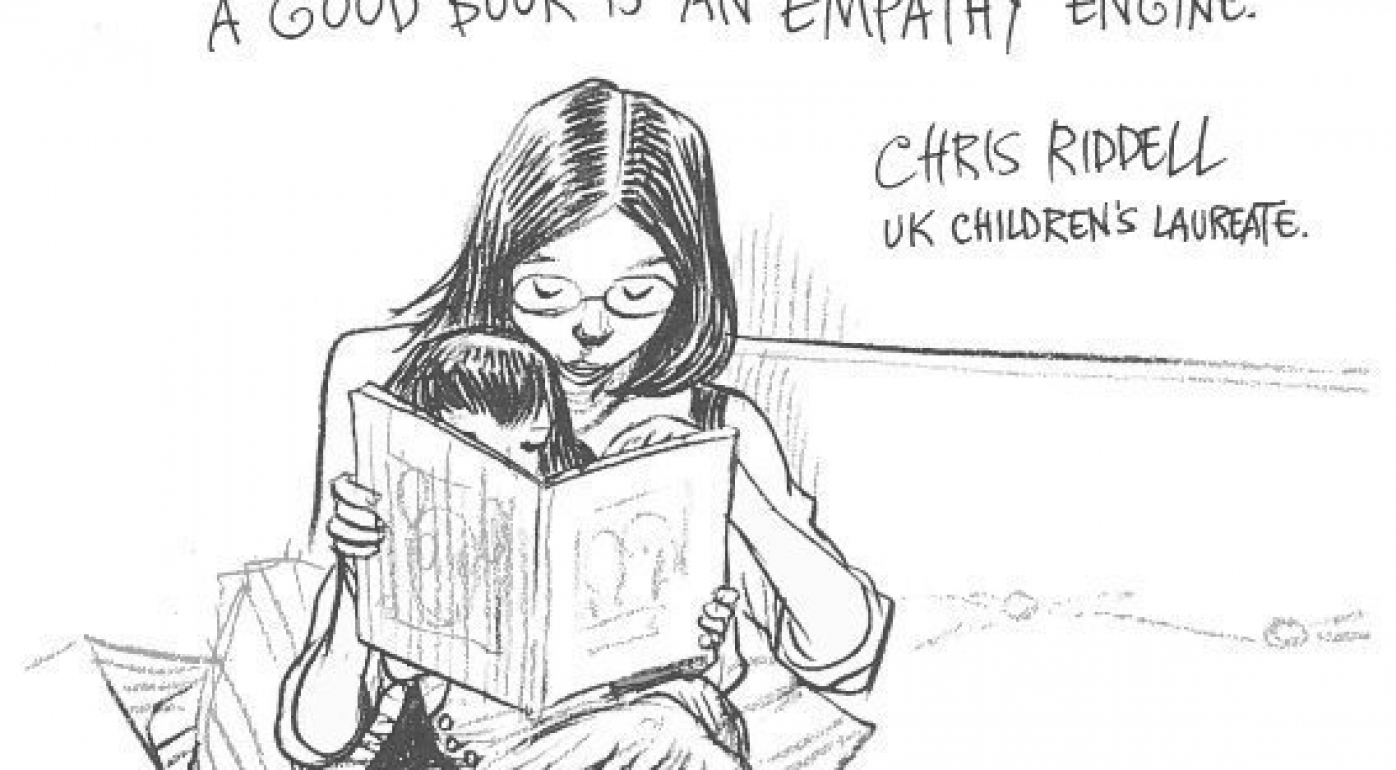 What We Are Reading: An Empathy Day Special

Celebrated on 12 June, Empathy Day was founded in 2017 by EmpathyLab. It harnesses the power of stories to help us understand each other better, and highlights empathy’s power and importance in our divided world. The British Council Literature team are doing our part in the lead up to Empathy Day, by talking about books that have helped us exercise our empathy muscles.*

*These are located in the heart.

Little Women by Louisa May Alcott

I identified so hard with the March family from Little Women that as a tiny patriot at age 7 I was surprised and confused to find that the book was set in America. I couldn’t believe that any story worth reading could have been written by someone who wasn’t British. Perhaps that was my first lesson that people around the world and throughout history have the same concerns – something that is the foundation of my career and life. How to grow up, how to be kind to people even if you don’t like them, how to see past the exteriors of people and see how their suffering has made them defensive or sad or conceited or lost, these are lessons that will never age.

Where others see a grumpy old man (Mr. Lawrence) and a sick boy (Laurie), Marmee and the little women see loneliness and grief and do their best to assuage it. The story of the Hummels, the German refugee family that comes to the Marches for help, and they respond by donating their own Christmas dinner, is another lesson. The girls feel uncomfortable at the Hummels’ house, embarrassed by their poverty, but still they go and offer what they can. Their embarrassment is testament to the quality of Louisa May Alcott’s writing – they are real people trying to do good and finding it difficult, rather than perfect moral avatars.

The four girls themselves are very different, but are valued for these differences; the things they are good at but also their flaws, and it’s understood that each girl is essential to the family dynamic. The novel reminds us that there should be room for all kinds of different types of people in the world, and so I hope that the book will remain a classic for many years to come.

From the list of books suggested for the Empathy Lab project, I read Tender Earth by Sita Brahmachari. It follows Laila, an eleven-year-old girl dealing – at first – with her older siblings leaving home and her best friend becoming distant from her. The novel’s real story, however, begins when Laila comes into possession of a scrapbook once kept by her grandmother, Nana Josie, which documents the social justice causes Josie was part of in her youth. Meanwhile, Laila makes friends at school with Pari, whose life as a refugee is slowly revealed throughout the novel, and who leads Laila to a new understanding of the links between the political past and the news stories and personal experiences of the present.

The portrait of Pari is remarkable in its skilfulness. Brahmachari holds back almost all details of the character’s life away from school until the novel’s final quarter, allowing Laila and the reader to see her as an individual without context or prejudice, rather than to immediately frame her as a refugee. Her moments of anger, sensitivity, and perfectionism make her an identifiable person long before they are revealed as products of the displacement and prejudice she has faced. Brahmachari also subtly brings other voices into the novel: text messages, letters and a note taped to a tree appear on the page as Laila reads them; this becomes a patchwork of blog posts, graffiti, newspaper articles and hand-painted banners, giving Laila and the reader different perspectives and allowing us to imagine ourselves within them.

The novel also makes strong use of Laila’s shortcomings: in one chapter, she watches her cousin shake hands with a homeless man, and though she wants to be more open she finds herself afraid to do so. I found this moment especially poignant – the novel seems to be letting its readers know that it is alright for us to acknowledge our flaws, and to want to improve on them.

Willy and the Cloud by Anthony Browne

This is another beautifully illustrated book by Anthony Browne, featuring his now very familiar character of Willy the Chimp as he tries to escape from a dark cloud that follows him wherever he goes. This cloud stops him having fun in the park - where everyone else is having a fabulous time - and causes him to close the curtains and stay at home. Willy desperately calls the police to help him with this cloud, and it is a very emotional moment in the story when they laugh at him despite his evident distress – an excellent starting point for a discussion about empathy. It works as a straightforward picture book, which appeals to young children (road-tested on my three year old who chose it three nights in a row and was fascinated by Willy’s angry face as he glared at the cloud) or as a tool for exploring anxiety and depression with older children.

My Name is Not Refugee by Kate Milner

Through another lens, My Name is Not Refugee is less of a story about the refugee crisis than it is about the relationship between a boy and his mother and the journey they take together. From being forced to leave their home to the daunting experience of setting up a new life in a strange place, this touching book shows readers that children forced to flee from their homes are not just refugees, but children just like them.

Kate Milner delicately conveys a wealth of information through beautiful illustrations that outweigh the need for a heavy amount of text. Demolished houses, camps, wire fences and crowds are intertwined with images of a curious and sanguine little boy trying to understand the world around him. Each step of the boy’s journey features a practical question posed to the reader – What would you take with you? How far could you walk? Can you speak more than one language? All questions which ask the reader to reflect on their own experiences, concentrating on the details of everyday life rather than the politics surrounding this current crisis.

Milner’s book addresses the complexities of the refugee crisis in a sensitive and accessible way encouraging the question: what would you do if this happened to you?

Overheard in a Tower Block by Joseph Coelho

'Our city children are its eyes and ears, its tongue and nostrils, closer to the ground, breathing the city, playing on the front line.'

This collection of poetry by Joseph Coelho shows us perspective on city life we may not be familiar with. We are introduced to the main character during the early school years dealing with bullies and classroom conflict and then follow them through adolescence, first kisses and exam results to adulthood. Common life experiences are punctuated by adult arguments 'a saga of a kingdom, of a king who had to leave'. Emotions run high within the 'electri-city', where life is complex and immediate. The good and the bad intermingle continually as we move quickly between episodes - the sadness of the mother, the ‘mermaid queen’ and the exhilaration of friendship in ‘The Cross Country School Run’ are just two examples of this jarring. There is constant noise in the tower block where the drama is set; fast cars with music jamming, plates smashing, fights breaking out and seagulls calling, but these are interspersed with welcome moments of calm, where our main character is able to find respite outside, in Richmond Park, on the beach or in a book 'where birdsong replaced shouts, where marshes replaced monsters'. Space to breathe and to think is important.

One of the most powerful elements of this poetry collection to me was the adult voice at the end. ‘I am the Father’, is the voice of the absent father. In this poem we now see a new awareness of the main character whose understanding of those around him has changed from the first poem in the collection ‘A Story of Fear’. He can now empathise with the fighting adults he grew up with. While there are certainly some very sad moments in this collection of poetry, what I loved was the hopefulness within it. In the beginning of the collection the poems describe a lack of control, and things happening to the main character such as being bullied, not knowing where the father is, or what mood the mother will be in after school. ‘The Wind’ changes things 'it sucks my clothes against my skin and blows away my past'. After this, towards the end of the book and into adulthood, the central character gains control and understands they can now shape the future themselves.

Most but not all of the books discussed are included in EmpathyLab's helpful list of thirty children's books, chosen by an expert panel for their empathy-inducing capabilities. You can see the full list of books here.

@EmpathyLabUK The magic connection shared when we #readforempathy is wonderfully captured here by @fionalumbers in her Empathy Il… https://t.co/nCGjZ5Ny6g
(1 days ago)

@EmpathyLabUK Honing our listening skills is a vital part of building empathy, and the Listening Switch Power Bank helped lots of… https://t.co/L4w4Xy5aiD
(1 days ago)

@EmpathyLabUK Teachers! 🚨 Interested in educating for empathy? We’re forming a new cohort of Affiliate Schools to partner with o… https://t.co/cslyuIs6jl
(2 days ago)