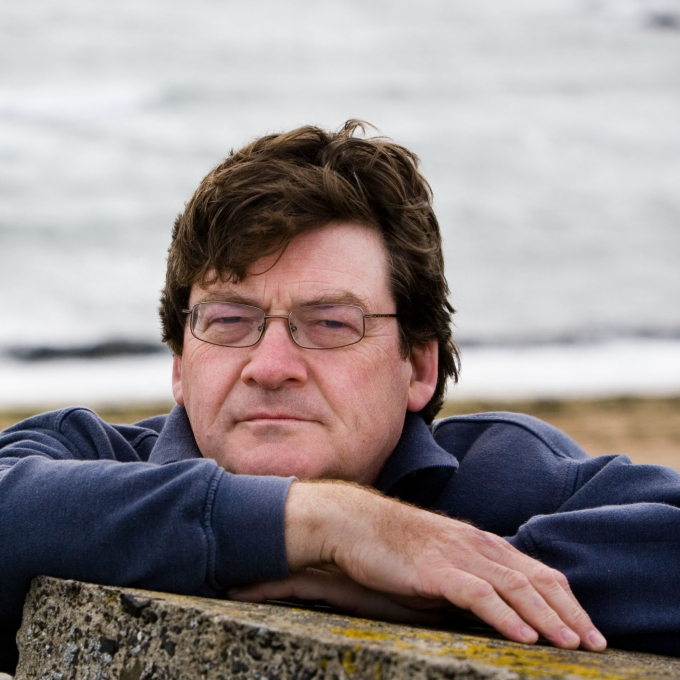 Poet and novelist John Burnside was born on 19 March 1955 in Dunfermline, Scotland, and now lives in Fife.

He studied English and European Languages at Cambridge College of Arts and Technology. A former computer software engineer, he has been a freelance writer since 1996. He is a former Writer in Residence at Dundee University and now teaches at the University of St Andrews.

His first collection of poetry, The Hoop, was published in 1988 and won a Scottish Arts Council Book Award. Other poetry collections include Common Knowledge (1991), Feast Days (1992), winner of the Geoffrey Faber Memorial Prize, and The Asylum Dance (2000), winner of the Whitbread Poetry Award and shortlisted for both the Forward Poetry Prize (Best Poetry Collection of the Year) and the T. S. Eliot Prize. The Light Trap (2001) was also shortlisted for the T. S. Eliot Prize. His poetry collection, The Good Neighbour (2005), was shortlisted for the 2005 Forward Poetry Prize (Best Collection). In 2008, he received a Cholmondeley Award.

He is also the author of a collection of short stories, Burning Elvis (2000), and several novels, including The Dumb House (1997), The Mercy Boys (1999) and The Locust Room (2001), which is set in Cambridge in 1975, and explores the consequences of a series of violent rapes. His novel, Living Nowhere (2003), is a powerful and violent story of friendship and loss. Recent novels are The Devil's Footprints (2007), shortlisted for the 2008 James Tait Black Memorial Prize (for fiction), and Glister (2008).

In 2011, his poetry collection, Black Cat Bone, won both the Forward Poetry Prize (Best Poetry Collection of the Year) and and the T. S. Eliot Prize; while his 2014 collection All One Breath was shortlisted for both these prizes. His latest collection of poetry is Still Life with Feeding Snake (2017) and his latest novel is Ashland and Vine (2017).

The opening lines of the title poem of John Burnside’s collection, The Hunt in the Forest (2009), evoke essential themes of his: ‘How children think of death is how the shadows / gather between the trees: a hiding place / for everything the grown-ups cannot name’.

Dark shadows, childhood traumas, the close presences of the dead, and above all the omnipresence of death throughout life; all these elements recur throughout his poetry, fiction and memoirs. The volume characteristically includes personal losses (‘In Memoriam’, ‘The Art of Dying’), finding the corpse of a run-over badger (‘Uley Blue’), as well as the memory of his own near drowning: ‘what I remember best is the water’s answer, / the shadow it left in my blood when it let me go / and the tug in my bones that remained, like a scar, or an echo, / concealing the death I had lost’ (‘Learning to Swim’).

Burnside is a Scottish writer with philosophical, religious and ecological concerns. He is conscious, as he remarked when introducing The Light Trap (2001), of ‘mostly working outside the British mainstream’ and feeling ‘privileged by this’ (Poetry Book Society Bulletin, Summer 2002). As a nature poet, he is very much of the present day, as when encountering the natural world from behind the wheel of a car. As with the badger, these animals are sometimes observed dead. A bird’s feathers are ‘perfect as bronze’ and ‘haunted by the aftertaste of life’ (‘Kestrel’). He is also a poet of visionary states, drug-induced perceptions, dreams and psychological disturbances; yet these are contained and transmuted into hauntingly memorable scenes. The title poem of his Whitbread Prize-winning collection The Asylum Dance (2000), for instance, in which the narrator and his mother are shown dancing with the patients at a mental hospital. They are ‘subtle as ghosts, yet real, with the vague / good-humour of the lost’. It goes on to draw us into its scenario of lost love and other-worldliness, with the peculiar urgency of a dream.

The ‘singular music’ of his poetry comes out of typically sinuous lines, varying greatly in length and arrangement on the page. He tends to avoid regular forms in favour of finding more organic, free-flowing shapes. Music is both a subject and a model for certain poems, as in Gift Songs (2007) with its responses to string quartets by Bartok and Benjamin Britten as well as to T.S. Eliot’s ‘Four Quartets’. This collection is perhaps his most difficult and overtly religious work, making metaphorical gestures between God and faith, the human and the natural world. Indeed, for Burnside, nature provides the varieties of religious experience with an essential context, while stating that ‘No one invents the quiet that runs in the grass, / the summer wind, the sky, the meadowlark’. Its most engaging sequence of ‘5 Animals’ successively describes an arctic fox, rock pipits, ‘Eider House’, a collie and coyotes.Burnside never loses sight of the fact that mankind is also an animal, well capable of savage violence and prone to the dangerous impulses of sexual desire. His poem ‘Animals’ refers to the self as ‘that mess of memory and fear / that wants, remembers, understands, denies’, a phrase whose significance can be seen throughout his novels. These are not for the squeamish. His first, The Dumb House (1997), has a psychopath as its narrator for a dark tale of his experiment to find ‘the locus of the soul’. He seduces the mother of a dumb child, then fathers twins by a vagrant women. Obsessed by the notion that ‘to know the soul, I would have to know language’, he forces matters to a gory surgical conclusion. In some ways, The Locust Room (2001) is even more disturbing, being set in the mid-1970s at a time when the so-called ‘Cambridge Rapist’ preyed upon female students. Preyed is the apt word, for at one point we are given his viewpoint, which is that of a predator who ‘should have been an animal – a polecat or a wolverine’.

His succeeding novels have been more about redemption. In The Devil’s Footprints (2007), a murder committed while being bullied as a child comes back to a middle-aged man discontented with his life and failed marriage. After being obsessed and then rejected by a teenage girl, he sets out on an epic walk back to his home village – an endurance test during which he becomes more reconciled with God, nature and his own humanity. Glister (2008) is in the fantasy horror genre, with a twisted combination of psychological mystery story, gothic and eco-thriller. It is set in the decaying post-industrial landscape of Innertown, where a series of disappearances of adolescent boys are being covered up by the authorities. Its teenage narrator is a disturbed adolescent, involved in episodes of sex and violence with his gang. He encounters the mysterious Moth-Man, an ambiguous father figure who, perhaps, is something far more sinister.

Father figures recur throughout Burnside’s writing, and their sources can arguably be traced to his own father, as depicted in the highly acclaimed memoir A Lie About My Father (2006). Indeed, for Burnside, fatherhood itself is a ‘narrative’, talking about fathers and sons and ‘examining the way men are made’. His own father is described as a violent and sometimes abusive alcoholic, who told lies all his life, but also as ‘a lost child that no-one had ever wanted’. The book opens with a meditation on the lifelong importance of Hallowe'en – a subject that appears in several poems – as a time when the natural and the supernatural come together, with ‘the possibility that the dead come back’. His father comes back, all too vividly; painful family incidents are described taking place. But there is also the realization that ‘our lives – my father’s, mine – were running on near-parallel lines’, with drink and drugs coming to take over his growing-up. Yet, by the end of this ultimately compassionate book, Burnside is able to be reconciled with his father’s memory, adding that ‘I’ve missed him all my life’.

Waking Up in Toytown (2010) is a sequel memoir, focusing on Burnside’s subsequent life as well as the consequences of his addictions – not only to mind-altering drugs but also difficult personal relationships and psychotic episodes. The latter resulted in treatment within mental hospitals for schizophrenia, which is where the narrative begins, with him ‘talking to the dead’. The book’s dream-like handling of memories and complex mental states is remarkable, as are the ways in which Burnside connects these up to intimations of the afterlife, which is ‘like the road in the dream I’ve had ever since I was a child’. It involves a high-earning career in computers being sacrificed to his developing impulse to write, and, after many an alcoholic lapse, goes into ‘the whole apophenic kitbag: noises, visions and, as the dawn breaks, those terrifying transformations in the body’. This account of a harrowing journey through life thus far is essential to understanding one of Scotland’s finest writers. 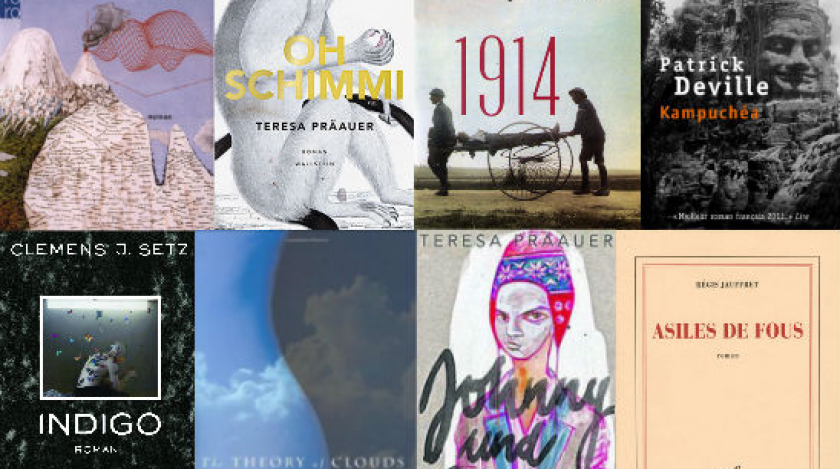 Poet and writer John Burnside makes the case for literature in translation and recommends contemporary literature in French and German that UK publishers have, so far, neglected.