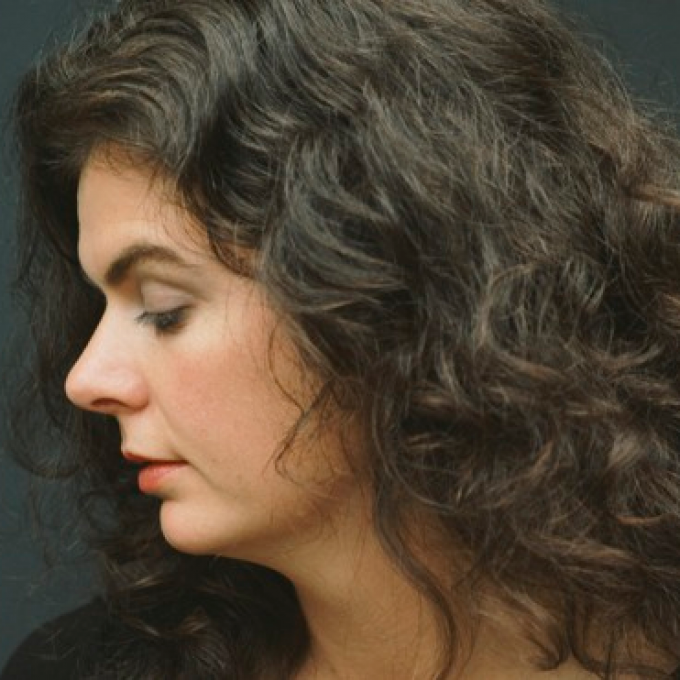 Tara Bergin was born and grew up in Dublin, and moved to England in 2002.

In 2012 she completed her PhD at Newcastle University on Ted Hughes’s translations of János Pilinszky. Her academic work includes talks given in Russia, Hungary and Poland.

Her poems have appeared in Poetry Review, Poetry London, PN Review, Best British Poetry 2012 and Modern Poetry in Translation. A selection of her work also appears in the Carcanet anthology New Poetries V.

Her debut collection, This is Yarrow (2013), is published by Carcanet Press, who also publish her second, The Tragic Death of Eleanor Marx (2017). This second collection was shortlisted for the TS Eliot Prize and the Forward Prize for Best Collection in 2017.

With the publication of her 2013 debut collection This is Yarrow, Tara Bergin has emerged as one of the most promising poets on the British scene.

Irish-born and based in England since 2002, pursuing academic research, she has become a fixture of poetry festivals throughout the UK with work that is at once unsettlingly offbeat and forensically attentive.

Critics have been particularly struck with her surprising twists on lyric forms. Sean O’Brien in the Guardian considered This is Yarrow to be “one of the most interesting first collections I have come across for some time”. To Sara Keating in the Irish Times, the “intimate domesticity” of Bergin’s work was effortlessly combined with  “a richness of beauty and experiment that speaks well of the state of contemporary Irish poetry.”

“Like most poets,” Bergin noted for the 2013 Read Regional festival, “I read a lot, but I am equally stimulated by other art forms, both ‘serious’ and ‘popular’.” She explains that the poems contained in her debut collection often grew from reflections on visual sources:

"Many of the poems in This is Yarrow were written over a period of time, during which I would attempt to match certain ideas or experiences to a particular form, or tone, or set of images. See for example ‘Sonnets for Tracey’, which though freely conceived, had as their starting point a postcard showing Tracey Emin’s Hate and Power can be a Terrible Thing (2004), a textile-based work with misspelt words." (Read Regional)

In addition to these influences, Bergin lists a fertile mixture of sources both high and low, off and on the page. There are Americana touchstones such as Raymond Carver, Johnny Cash, Elizabeth Bishop, Ezra Pound, Man Ray and Philip Roth. But she reserves a particular affection for the Russian tradition, suggesting Fyodor Dostoevsky, Marina Tsvetaeva, Anton Chekhov and the architectural wonders of St Petersburg as particular inspirations.  Her fascination with Ted Hughes is not just a property of her academic work but runs through the sides of her poetry that fixate on an often bittersweet natural world. Within the Irish lineage, she consciously draws upon Patrick Kavanagh and Medbh McGuckian, and sits alongside other promising Irish rising poets such as Conor O’Callaghan.

The themes in This is Yarrow are characteristically dark, but treated with a cynically raised eyebrow. Stag parties, job interviews and the indulgences of contemporary painting: all dissolve into ungraspably rich moments under her withering gaze. The theme of Catholicism is present, woven into the rituals of Irish education, most memorably in ‘The Queen of the Rodeo’ which splices the spectacle of country shows with the text of the Act of Contrition, with the script-driven prayers jarring against a baying, expectant mob.Most powerful of all, though, is a wonder at the natural world, an attitude that dominates the collection’s title poem – a model of attentiveness that spells out the resonant symbols contained within flora and fauna: “this is yarrow, this is elder, this is the collared dove”. In keeping with her appreciation for Hughes, however, this world is as much nightmarish as magical for those who live within it: “I am unwell, little crow, / I am unwell and far from home / where longing lives in my house".

A key term for understanding Bergin’s work might be ‘secrecy’. The word is there at the heart of the piece ‘Looking at Lucy’s Painting …’ used in a wry, almost satirical way to describe the supposedly ineffable nature of water:

"and artists will insist on painting water, despite its obvious difficulty
and, above all, its secrecy"

The word also seems to describe the condition to which her poetry aspires. As she explains, her own academic training has helped her appreciate these hidden qualities to history and to events: "As a literature PhD student who was also a poet,” she told The Poetry School, “I was constantly seeing the creative possibilities in things like archives – something which often distracted me from the task at hand.” Her peoms are a series of riffs on these secrets and possibilities. As the collection’s layers of irony and juxtaposition accumulate, the jealously guarded, undisclosed explanations at the heart of events and images seem ever further from our grasp.

The debut was particularly well received by critics. John North in the Manchester Review remarked that “one would not think Tara Bergin’s This is Yarrow a debut.” To Tess Somerwell in Tower Poetry, though, “we may not understand all these poems… most reward us at least with flashes of recognition. Bergin’s perceptions are sharp, her senses of history, community, and relationships deep and acute, and her technical control over language and form is assured and graceful. This is Yarrow may deliberately leave us wanting, but it leaves us wanting more, which can be no bad thing for a first collection.”

Reviewing the collection in the Guardian in 2014, Sean O’Brien was particularly impressed. “It takes a certain decidedness,” he noted, “to set aside the furnishings of realism and its overweening stylisation of everyday life in order to hold out for something else. In her debut, This Is Yarrow, the Irish poet Tara Bergin does not so much steer away from the familiar as seem not to have encountered it except as a rumour… the good poems are numerous and original.”

In her poem ‘Acting School’, Bergin remarks that “exiting well is an art / it will prove no less vital to your life as an artist.” As the reception to her debut collection suggests, Bergin has captured the opposite truth, making an enviably smooth entrance into the ranks of the British poetry scene.