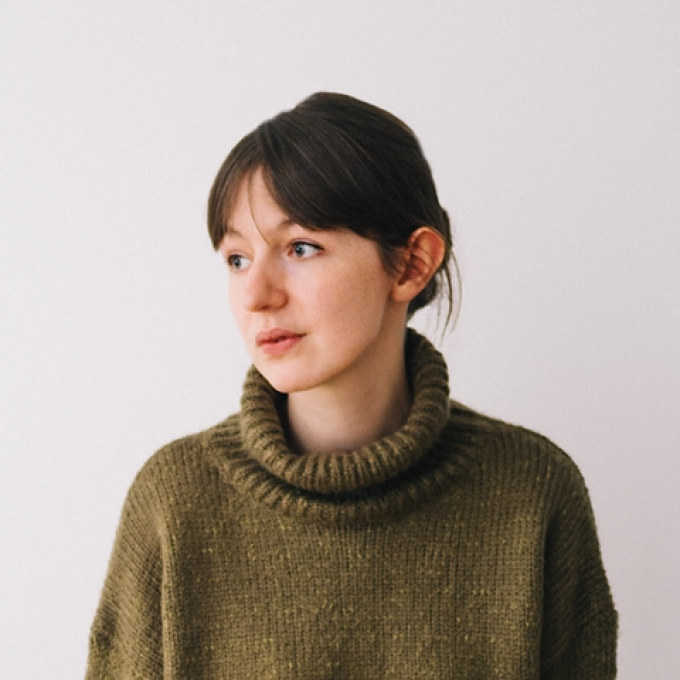 Sally Rooney was born in 1991 in Castlebar, County Mayo. She holds degrees in English and American Literature from Trinity College, Dublin, the city where she now lives. She won the 2017 Sunday Times/Peters Fraser + Dunlop Young Writer of the Year Award.

Sally Rooney’s work has appeared in The Dublin Review, The Stinging Fly and Granta. Rooney's debut novel, Conversations with Friends, was published in 2017. Her second novel, Normal People (2018), was a bestseller, and won several major awards, including the prize for Best Novel at the Costa Book Awards, and was named the Waterstones Book of the Year.

Sally Rooney is not, as she observed in an interview with the Belfast-based magazine The Tangerine, a writer of ‘autofiction’. However the similarities between Rooney’s own life and that of Frances, the heroine of her debut novel Conversations with Friends, are impossible to miss.

Frances, Conversations’ twenty-one-year-old fledgling-author narrator, ‘moves in all the same social circles’ as Rooney, is studying for the same degree that Rooney pursued at Trinity College, Dublin, and ‘has some of the same cultural position [sic]’ (The Tangerine). But Conversations is a novel nonetheless, and novels, as Rooney goes on to point out, depart from life not least in having plots.

The plot of Conversations is essentially a rather more crowded version of the classic “girl meets boy, girl loses boy, girl finds boy” story (Claire Lowdon, Sunday Times). Frances, whose best friend Bobbi is also her former girlfriend, falls for Nick, an older, married actor. Nick’s wife, the writer and photographer Melissa, becomes friendly with Bobbi, but Nick’s affair with Frances is exposed when the four holiday together in France. In the second half of the novel, Frances and Nick’s on-off relationship continues, while Frances also undergoes tests for distressing physical symptoms.

For Lowdon, Conversations is a novel haunted by the ghosts of F. Scott Fitzgerald’s 1934 novel Tender is the Night. Rooney’s epigraph, borrowed from the poet Frank O’Hara, also suggests her central concern is with timeless themes: ‘In times of crisis, we must all decide again and again whom we love’. Yet since her emergence Rooney has consistently been hailed as a thrillingly contemporary voice – ‘Salinger for the Snapchat generation’, in her editor’s words.

Certainly, modern methods of communication loom large in Conversations – emails and text messages are its narrative motors. But it is perhaps a more conservative novel than one might expect from the buzz that has surrounded it. As Paula Cocozza pointed out in her Guardian profile of Rooney, no one in Conversations actually uses Snapchat, and although Frances characterises her relationship with Nick as ‘a Word document which we were writing and editing together’, it is debatable whether this is incontrovertible proof of ‘the extent to which the younger generation have subsumed technology into everyday life and thought’ (Jonathan McAloon, Financial Times). After all, when Frances wishes for physical proof of her affair with Nick, she is expressing a longing with which romantic heroines down the ages would identify. Moreover, the evidence she longs for isn’t available precisely because the couple’s affair has been ‘conducted in real life and not online’.

Yet this is unmistakably a novel of the 2010s – Frances researches Nick’s screen roles on YouTube and, after their break-up, downloads a dating app. We learn too that Frances used internet message boards as a teenager, becoming friends with an older man. The friendship ended when the ‘friend’ in question sent Frances an unsolicited picture of his genitals, but the emotion that Frances recalls is not anger but guilt: ‘I felt like I had committed a sick internet crime’. It is an experience and response that too many women will relate to, but one that has rarely been reflected in print. (That the year of Conversations’ publication was also the year of #MeToo seems particularly relevant here.)

The specific anxieties of, and pressures experienced by, young millennial women are central to Conversations. Claire Kilroy noted in the Guardian that whereas previously the church and state have been the ‘apparatus’ of female repression in Irish fiction, now ‘the women have repressed themselves: they are too guarded to articulate their vulnerabilities. Frances is crippled by the pressure to perpetually “act unfazed”, to “affect an ironic tone”’.

Emotional detachment is a recurrent theme in Rooney’s work. The narrator of “Mr Salary” is aware that she uses her formidable intellect as a defense and prides herself on her coolness: ‘Emotionally, I saw myself as a smooth, hard little ball’; ‘I was a cold customer’. But as Rooney reflects in ‘Even if you beat me’, an essay detailing her own career as a one-time champion student debater, women pay a penalty if they appear to lack warmth. ‘Where aloofness in men is seen as mysterious, in women it’s seen as cold. If you’re a girl, judges don’t just want to know you’re smart; they want to know you care.’

And Conversations suggests that there might be other costs. As Kilroy notes, Frances ‘repeatedly declares herself to be emotionally cold’, but her attempts to repress or deny her feelings have left her estranged from her physical self, unaware even when she is crying. Only the regulated pain of self-harm seems able to overcome the psyche/soma disconnect: ‘I wanted to hurt myself again, in order to feel returned to my physical body’ Frances confesses at one point. And it is this that makes her physical suffering in the second half of the book so powerfully affecting: to be diagnosed with endometriosis would be devastating enough, but for Frances it means finally accepting not just the fact of her own body, but the limits of her intellect – no matter how clever she is, there are some things that are beyond her control.

For Rooney herself, however, it is her characters’ economic circumstances that says most about the way her generation lives now.  ‘The essential definitional fact about millennials,’ she told The Tangerine, ‘is that they are in an economically precarious position that older generations have forcibly placed them into…. I don’t really give a shit about whether people take selfies or not. That’s a non-essential characteristic… the essential characteristic is the economic one.’ Thus in Conversations, ‘part of what Frances fetishizes so much in [Nick and Melissa’s] existence is that they’re not condemned to the life that has been handed down to her. They… actually own a house after they got married, which used to be normal’.

Conversations was widely praised on its publication in 2017, not least for the sharpness of its characters’ ironic, quick-fire exchanges. ‘Rooney’s book glitters with talk’, enthused Alexandra Schwartz in The New Yorker, and the novel’s ‘brilliant, funny and startling dialogue’ was also emphasized by Paula Cocozza. Criticisms were few: Claire Kilroy regretted that none of France’s writing ever makes it to the page, while Claire Lowdon suggested that ‘not every metaphor lands’. Yet here it is perhaps necessary to distinguish between the book’s narrator and its author – one would not necessarily expect Frances to be as sure-footed in her coinages as Rooney. Moreover Frances’s use of figurative language provides us with plenty of clues as to her poetry – one thinks for instance of the description of her mother’s hand, a ‘big warm plane… like something that could have grown from the earth’. (Hands, it is interesting to note, are a recurring motif, emphasizing the book’s concern with connection and failures thereof.)

Rooney’s is without doubt a distinctive new voice, one that she suggested in an interview for the British Council has been formed as much by American TV and British pop music as by the greats of Irish literature. That it will inspire and influence a new generation of writers in Ireland and beyond seems equally certain.