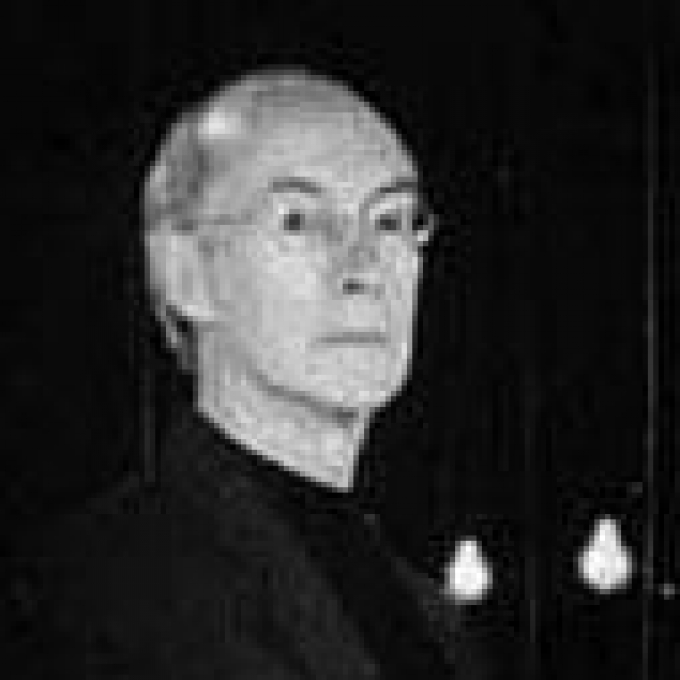 He was educated at St Mary's College, Crosby, Liverpool, and at Hull University. He taught at St Kevin's Comprehensive School, Kirby, and lectured at Mabel Fletcher College in Liverpool and at the Liverpool College of Art.

He was a member of the pop music/poetry group 'The Scaffold' between 1963 and 1973. He made his name as one of the 'Liverpool Poets' with Adrian Henri and Brian Patten, included in The Mersey Sound: Penguin Modern Poets 10 (1967).

A Fellow of John Moores University in Liverpool, he won a Cholmondeley Award in 1999 and was awarded an honorary MA from Nene College of Further Education. He was Fellow of Poetry at the University of Loughborough (1973-5), Honorary Professor at Thames Valley University (1993) and is a member of the Executive Council of the Poetry Society. He was awarded an OBE in 1997.

He has twice won the Signal Poetry Award: first in 1984 with Sky in the Pie, then again in 1999 for Bad, Bad Cats. He is also the author of a number of plays, including All the Trimmings, first performed at the Lyric Theatre, Hammersmith, in 1980, and The Mouthtrap, which he wrote with Brian Patten, produced at the Edinburgh Festival in 1982. He wrote the lyrics for an adaptation of The Wind in the Willows first staged in Washington, DC, in 1984, transferring to Broadway in 1995. He has written for and presented programmes on BBC Radio including 'Poetry Please' and 'Home Truths'. His film work includes Kurt, Mungo, BP and Me (1984), for which he won a BAFTA award, and he won the Royal Television Society Award for his science programme The Elements (1993).

His Collected Poems, bringing together over forty years of McGough's poetry, was published in 2003, and his live poetry album, Lively, is now out on CD.

Roger McGough's autobiography, Said and Done, was published in 2005. His latest adult poetry collection is As Far As I Know (2012).

Roger McGough has been one of Britain’s most well-loved poets since his work was included in the Penguin anthology, The Mersey Sound: Penguin Modern Poets 10, in 1967, along with the other ‘Liverpool Poets’, Adrian Henri and Brian Patten. The Mersey Sound has since sold over one million copies. Of the three Liverpool Poets who came to prominence at that time, all strongly influenced by Beat poetry, McGough has had by far the most steady and continuous success, quickly becoming a household name throughout Britain. He is also prolific - he has published over 50 books of poetry for adults and children, along with numerous plays - and he has always been a very active performance poet as well as a writer.

McGough is known for his accessibility - his poetry reaches a wide audience and he has always been keen to stay out of the ivory tower of academia and ‘high brow’ poetry that is inaccessible to the general reader. However, as an accessible and extremely popular poet, he has always struggled with the attitude that assumes that his work is not worthy of serious literary attention. He was disappointed not to be awarded the prestigious role of Poet Laureate after the death of Ted Hughes in 1998 (it went to Andrew Motion):

'One of the problems is it does tend to be a certain kind of poet […] Male, for a start. Middle class. All those things. Whereas it might be interesting to have a black poet or a lady poet […] or why not a children’s poet?'

McGough’s trademark is his humour, particularly his sharp comic timing. In his early works, he emphasised humour particularly strongly, for fear of being thought pretentious:

'If I’d written a serious poem I’d always end up making it funny, to prove to this imagined reader or listener, which would have been a fellow Liverpudlian, that I’m not better than you. It took a while to have the confidence to be serious.'

McGough’s voice has always epitomised the working-class Liverpool of his childhood: down-to-earth, unpretentious, dry, witty, ironic and sceptical. He engages in mischievous word-play, particularly that of inventing his own words or word combinations, and he mocks and subverts clichés and other overly-familiar expressions. In ‘First Day at School’, he uses this approach to convey the child’s overwhelmed and confused state of mind. The speaker is ‘A millionbillionwillion miles from home / Waiting for the bell to go (To go where?)’, while ‘glassrooms’ are ‘Whole rooms made out of glass’ and the ‘Tea-cher’ is the ‘one who makes the tea’. ‘Unlucky for Some’ is typical of McGough’s tendency to see the multiple layers and ambiguities of words, expressions and concepts, in a manner which is simultaneously humorous and insightful:

'What do I do for a living? Survive.

McGough thus exposes the shifting and subjective nature of ‘reality’, emphasising that there are no fixed truths or meanings, but only perceptions and interpretations. He also uses this approach in his poetry for children, particularly in ‘On and on ….’ which occurs repeatedly throughout Lucky (1993): ‘Is a bad speller / one / who casts a wicked spell? / Is a shop-lifter / a giant / who goes around lifting shops? […]’ This is not merely for entertainment value - McGough encourages children to question the world around them and not take things at face value, in the same way that he himself questions and subverts society, reality and life itself.

For McGough, therefore, poetry is a form of subversion, and this can be serious or humorous, or both simultaneously. In his poetry for adults, his use of humour has evolved throughout his career, and his deceptively simple, quirky and witty style incorporates all manner of serious issues and perceptive insights.

Even some of the earlier works, such as Summer With Monika (1967; revised 1978) and Holiday on Death Row (1979), are acutely satirical. Geoff Sadler comments on McGough’s particular brand of satire:

'His writing tends more to amusement than to bitter anger, and polemics from him are few and far between, usually made from a humanitarian rather than a political standpoint.'

McGough may avoid anger and bitterness, but he does nonetheless take a sceptical approach to life, using dry humour as a way of coping with life’s inevitable disappointments. Perhaps the most apt example of this is the title of his 1999 collection, The Way Things Are. The title poem articulates the voice of a well-meaning father, pouring ‘cold water’ over his child’s imaginative questions:

'No, the candle is not crying, it cannot feel pain.

Even telescopes, like the rest of us, grow bored.
Bubblegum will not make the hair soft and shiny.
The duller the imagination, the faster the car.
I am your father and this is the way things are […]'

However, though the poem may be read as cynical, the child’s magical and subversive approach to life continues, constantly challenging the father’s limited perspective.

Here and there McGough addresses tragedy in his poems. One example is ‘What Happened to Dorothy’ (also from The Way Things Are), in which the careful and deliberate phrasing of the title subverts the familiar rhetorical question of ‘Whatever happened to …?’ by offering an answer, and a tragic one at that. The speaker reminisces over an old photo of himself as a page-boy at a wedding, accompanied by seven-year-old bridesmaid Dorothy. In works such as this, McGough’s deceptively light touch, dry understatement and lack of detailed elaboration give the poems acute poignancy and depth of feeling by jolting the reader:

'That’s Dorothy, Maid-of-Honour.
Though only three years older,
in her long white dress,
veil and floral tiara
she could be a teenager.
She never would be, though.'

The Way Things Are is one of various later works in which McGough displays a deeper compassion, with more of the humanitarian impulse which has always been present. This is not to imply that his use of sardonic humour is any less in evidence, but McGough has gradually become more confident about addressing serious issues, as he comments himself:

'If I do a poetry reading I want people to walk out and say they feel better for having been there - not because you’ve done a comedy performance but because you’re talking about your father dying or having young children, things that touch your soul. I hope people will feel better for it.' (The Guardian, 14 November, 2005)

In 2002, McGough published Everyday Eclipses, which combines poems about his own childhood, his experiences of parenthood, nostalgia for the past and musings on death. In 1999, he had been commissioned to write a poem about the total eclipse of the sun. The result was ‘Everyday Eclipses’, which became the title of his 2002 collection. In this poem, McGough chose to examine a myriad of everyday experiences rather than the total eclipse itself - in other words, he celebrates the world of ordinary life, its trivialities and its profundity: ‘The hamburger flipped across the face of the bun / The frisbee winning the race against its own shadow.’ Ultimately, however, ‘Everyday eclipses another day’, ‘One death eclipses another death’ and ‘One birth eclipses another birth’. McGough adopts a similar focus on ordinary life in ‘Reasons for Winning’, the poem he wrote for the 2006 World Cup, in which he rouses the team to ‘Win it for the late train and the overcrowded bus / Win it for granny who can’t understand the fuss […] Win it for the ordinary man in the street […]’ Although McGough’s style has matured and developed over the years, he remains true to his roots as an accessible, down-to-earth poet who is not only in touch with the world of the commonplace and the ordinary person, but celebrates it with an unsentimental warmth and affection.

McGough’s Collected Poems was published in 2003, followed by his autobiography, Said and Done in 2005. He also presents Poetry Please for BBC Radio 4.

@McgoughRoger Thank you so much Pie. You have made my day/month/year. https://t.co/cYp4YzKuqU
(5 days ago)

@McgoughRoger World Premiere of my new musical opens tomorrow (I don’t get to write that very often.) ‘Money-go-Round’ here at th… https://t.co/PqlpU3czgK
(1 months ago)

@McgoughRoger On receiving an award a person might say they feel 'humbled.' On receiving the Sue Gray report did the PM mean to s… https://t.co/JLGrD1KSOM
(1 months ago)

@McgoughRoger RT @clpe1: Lovely to see that CLPE patron @McgoughRoger's Wind in the Willows inspired fable, Money-Go-Round, has been adapted for the stag…
(1 months ago)