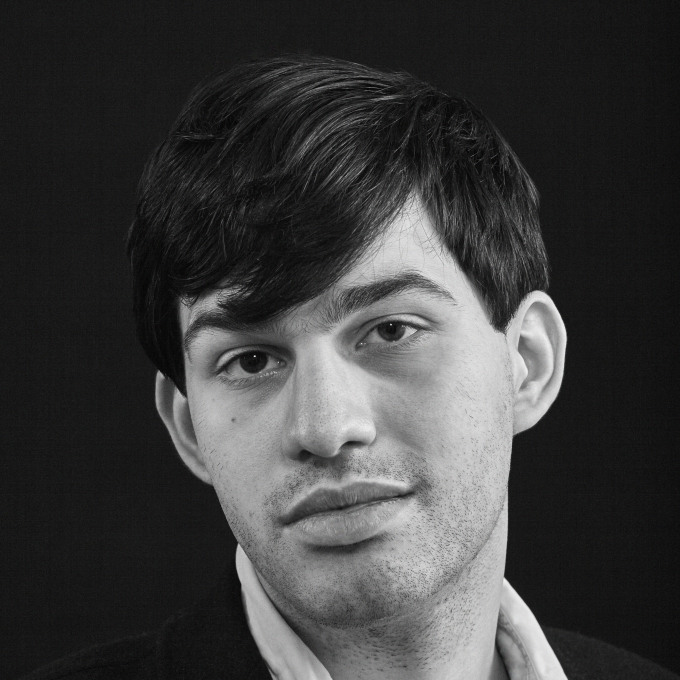 Minoo Dinshaw is a writer living in London. He is the son of award-winning author Candia McWilliam and Oxford academic Fram Dinshaw.

Outlandish Knight: The Byzantine Life of Steven Runciman (Allen Lane, 2016) is his first book. He was shortlisted for the Sunday Times/Peters Fraser + Dunlop Young Writer of the Year Award (2017).

Minoo Dinshaw seemed to emerge full-formed as one of the most promising biographers of his generation with his 2016 debut Outlandish Knight.

It explored the life of Steven Runciman, famed British historian of the Crusades and eccentric high society enigma. Through this somewhat unlikely figure, Dinshaw managed to offer a vivid portrait of mid-Twentieth Century society, in a book hailed by the Spectator as 'monumentally impressive: scholarly, witty and gorgeously written'.

Dinshaw had taken as his subject one of the most prominent historians of the last century. But in a long, energetic and serpentine life, Runciman had also been much more than that. Son of a grand Scottish borders political family, he was blessed with the kind of indulgently whimsical and cameo-filled life that independent wealth and endless family connections make possible. He was friends with George Orwell at Eton, a college contemporary of the Cambridge Spies, on good terms with the Bloomsbury group, and went on to become an omnipresent Establishment zelig of mid-century English and European high society, mingling with Turkish statesman Ataturk, the Queen Mother, Hollywood celebrities, and claiming to have known every Twentieth Century Prime Minister until Blair. His life as a roving independent scholar also saw him become Grand Orator of the Greek Orthodox Church, an honorary Whirling Dervish, Greek Astronomer Royal and later on Laird of the Scottish Isle of Eigg.

This is the kind of life that seems to cry out for biographical treatment. And by the time he died in 2000 at the age of 97, Runciman knew that he was a 'relic of a past age … embodiment of a… nearly mythical era.' Yet as Dinshaw’s book makes clear, Runciman hoped that he wouldn’t find his Boswell. 'I pray I shall not find a biographer' he said, fearing that any future writer would be 'insensitive to the atmosphere of the past and unaware of that transient element, its humour.'

Runciman was certainly a strange subject for Dinshaw to choose. The task of bringing the this strangely private, often unpleasant, irascible and outrageously snobbish figure alive to a modern audience - to whom he was largely forgotten - presented a real challenge. Undeterred, Dinshaw saw what he calls 'glamour' in the Runciman story, and sought to get to the bottom of his enigma and mystique. Thus began a Herculean trawl through private correspondence, interviews, unpublished memoirs, and obvious printed sources, that resulted in a monolithic 640-page work.

Dinshaw clearly identifies with the more enduring intellectual values of his subject, not least his intelligence and curiosity. The title 'Outlandish Knight' comes from an old Scottish ballad, and, the author claims, it captures Runciman’s contradictions and enthusiasms with remarkable felicity:

'his uneasily sceptical attraction to chivalric romances; his preference for the exotic over the parochial; for the multivalent over the monolithic; for the poetic truth over the literal fact, and the organic tradition over the codified doctrine. It is a phrase as hauntingly peculiar as the man who had come to preoccupy me'.

The biographer also clearly values other aspects of Runciman’s vision of the world, celebrating how sympathetic treatment of the role of Byzantium in his books on the Crusades stood as a corrective to the hitherto dominant Western views. As Dinshaw puts it, Runciman’s work contained an implicit political charge: 'an opportunity to depict a fading civilization under threat from totalitarian civilization… a sermon against iron curtains, and an introduction to a more interlocked way of reading the world.' Duly, Outlandish Knight ends by expressing relief that Runciman escaped the predicament of 'hearing his work, especially his volumes on the Crusades, being misquoted and manipulated by those with small understanding or real interest in his views, and even less in the reality and validity of the past itself'.

As with all the best biographies, Outlandish Knight doubled up as a portrait of an age. As many readers have said, the remarkable cast of dons, spies, majors and queens often reads like fiction, and Dinshaw handles his cast of characters with a novelist’s ease, sketching upper class life with remarkable clarity and insight. Writing recently about such creative reconstructions of the past, Dinshaw has said that:

'The most important weapon of the historical novel is its power to reveal the interior lives of its characters, where existing evidence can only hint at interest, motive or principle. The novelist can also spin out the tantalising threads of incongruity that poke out of history: the Duchess barters; the werewolf sings; the arms dealer is an affectionate family man.'

Using some of the same 'narrative thrusts' and 'fictional motivations' that he praised in Runciman’s work, Outlandish Knight also allows the meaning of events to linger through copious and sustained evocation and an eye for the telling detail.

This gift for evocative panorama was a quality much admired by reviewers. 'What keeps the reader’s interest on every page' reflected the New Statesman, 'is, precisely, this biographer’s sensitivity to atmosphere and his humorous awareness… the strengths predominate – near-omniscient thoroughness, gentle humour, psychological precision.' The Economist thought he provided 'a vivid picture of many aspects of Twentieth Century Europe that now seem almost as remote as the crusades and religious schisms [Runciman] described in his books.' The Guardian thought it 'an evocative and richly detailed portrait of an extraordinary mind and a golden age of scholarship.'

Inevitably, with such an idiosyncratic subject, others were more perplexed. Rosemary Hill in the London Review of Books admired the book but raised eyebrows at the ultimate tone, arguing that so much of the unappealing about Runciman is laid bare that time and 'again the reader wonders what Dinshaw imagines he is doing by making his subject appear unpleasant in so many and various ways.' The Financial Times saw the biography’s indulgences in the same terms as those 'Waugh levelled at Brideshead Revisited after the war: that it is infused with ‘a kind of gluttony’ for the splendours of the recent past, a nostalgia rooted, ultimately, in its own time.'

All agreed, however, that this was a strikingly assured debut. As his reflections on the role of the historian and biographer suggest, this success is based on a clear-eyed vision of what the best history writing can do:

'Taking account of the period’s complexity, true historians provide a service to a hungry public when they defend diversity and attack homogeneity with reference not to the society of the present, but to the evidence of the past. They are not ethical guides, nor are they likely to be effective should they claim such a role. The historian’s task is to convey the past’s landscape, portrait, idiom and temperament without reference to a modern standard. This requires care and compassion for a context that, though past, need not ever be altogether lost.' (History Today, 2017)

His ability to live up to these values and methods has meant that Dinshaw has a ready audience for his next project. As John Julius Norwich wrote in the Sunday Telegraph, the knack for spotting an unlikely biographical subject meant that this 'dazzling young writer' is destined for further distinguished things: 'Watch Minoo Dinshaw. He will go far.'