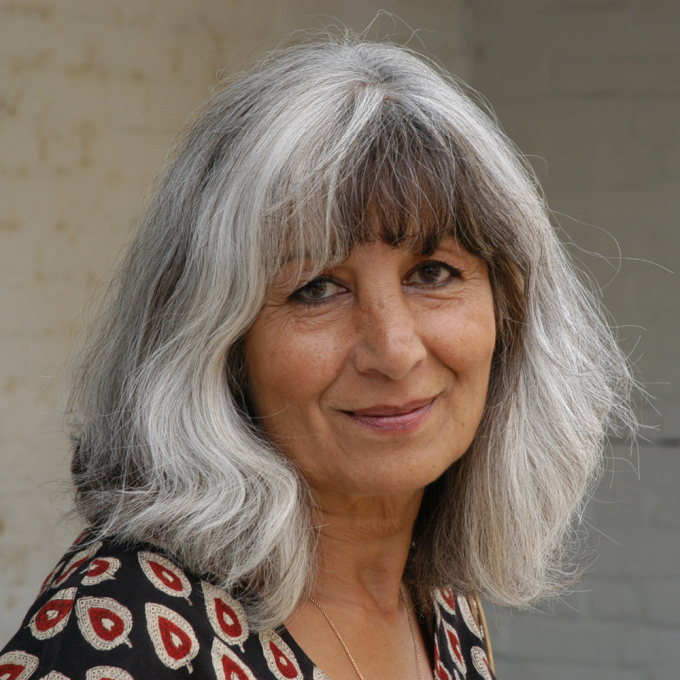 She grew up on the Isle of Wight and was educated in Switzerland at the University of Neuchâtel, and in London at the Drama Centre and the School of African and Oriental Studies. She has worked as an actor and director in both the UK and Iran, founding Matrix, a women's experimental theatre group, and co-founding Theatre in Exile.

She is a tutor at the Arvon Foundation, and has taught Creative Writing at universities and colleges in the US and England. She was Poet in Residence at the Royal Mail as part of the Poetry Society's Poetry Places scheme and has given readings of her work at the Voice Box at the South Bank Centre in London, the Poetry Society and at festivals in Britain and mainland Europe.

Her poetry collections include In White Ink (1991), Mirrorwork (1995), for which she was awarded an Arts Council Writers' Award, Entries on Light, and The Chine (2002). A Selected Poems was published in 2000 and the Poetry Book Society Recommended The Meanest Flower, in 2007, shortlisted for the 2007 T. S. Eliot Prize and named as a Financial Times Book of the Year. She is also the author of a children's book, I Know a Place, published in 1985. In 2011 her collection Child: New and Selected Poems 1991-2011 was published.

In 2008 she translated the Poems of Kajal Ahmad with Choman Hardi.

A former actress, Mimi Khalvati has played an integral role in the poetic life of the UK since 1990.

A respected poet and poetry translator, she is furthermore the mentor and guide for dozens of emerging poets through her work as co-ordinator (and often course tutor) at The Poetry School. Her place on the shortlist for the esteemed T.S. Eliot Prize for The Meanest Flower (2007) provides irrefutable evidence of the high regard in which her work is held by her contemporaries and readers.

Her heritage is drawn from Iran, where she was born, and England, where she grew up. Christina Patterson summates that ‘Khalvati owes as much to the Isle of Wight as Iran’ (The Independent, 17 August 2007). This East/West duality places her in balance between two cultures so often in conflict in the modern world. Her poetry is largely accessible, yet it still hints at the exoticism of the Farsi tongue that can’t quite be denied even if ‘I have fled on mules, the star of Turkey in my sky’ (‘Rice’, In White Ink, 1991).

Khalvati’s relationship with traditions, whether they are British or Persian, is exemplified through her use of verse forms. Like the best of our poets, Khalvati is a great formalist because of her innovative use of historical precedents and recognition that form is an ostensible part of subject matter. She continually returns to the ghazal, a 10th century Persian form with a ‘radif’ or refrain. Not only does the ghazal reinforce her cultural inheritance, but the word itself also means ‘talking to women’ and infers her thematic concerns. ‘Ghazal: It’s Heartache’ from The Meanest Flower demonstrates the timeless recognition of love-lost, ‘When you wake to jitters everyday, it’s heartache. / Ignore it, explore it, either way it’s heartache’. Sonnets in their multi-forms, whether standing alone or as part of longer sequences, are also familiar Khalvati territory. This archetypal English form is used in ‘In Lieu of a Postcard’ (In White Ink) to tease out questions of loneliness and distance as the speaker wonders ‘What is it that your absences have nursed / in me? What ‘quiet groove’? What ‘dreamy view? / No odyssey perfects those scenes of you / I ramble in, rehearsed and re-rehearsed.’ In form, whether sestina, sonnet, ghazal or haiku, Khalvati writes with dexterity, producing illusionary elasticity from often stiff parameters.

Throughout, Khalvati draws our attention away from the poetics and into the real poetry of her work. Her observations focus on the intricacies of places and the experiences therein. ‘The Mediterranean of the Mind’ (The Meanest Flower), in memory of the late Michael Donaghy, uses the ‘prickly and sour’ literal landscape in tandem with imagination and to emphasize loss, lack and remembrance by ‘weaving through nouns’. ‘The Chine’, the title poem of her 2002 collection recalls the landscape of youth on the Isle of Wight, and the role of memory in later life ‘Shanklin Chine is closed for winter … / … But the mind is not.’ While in childhood ‘Time itself seems vertical’ (‘The Chine’) by ‘Middle Age’ former world views are challenged by cynicism, ‘What did we vow we’d be in middle age? - / Young of course. Immortal’.

Her work is notable for its dissimilarity to other prominent poets writing today; there is none of the ‘streetwise lingo’ Ben Wilkinson finds in Simon Armitage’s work (Critical Perspective, Contemporary Writers, 2008). Indeed, to find a fitting literary classification for Khalvati, one must turn to the Romantic poets of the later 18th century. The title of her Poetry Book Society recommended collection, The Meanest Flower, is drawn directly from William Wordsworth’s ‘Ode: Intimations on Immortality from Recollections of Early Childhood’. The Romantic tradition provides a space where mysticism meets sensibility, for example in the title poem, a sonnet sequence which addresses the dual Wordsworthian concerns of ‘timeless’ nature and the ‘safety… [and] happiness’ of childhood in supremely elegant fashion.

The title of In White Ink comes from The Laugh of the Medusa (1975) by French feminist Hélène Cixous, the exponent of écriture féminine. Khalvati recognises in this collection (and others) the importance of her female lineage as daughter, woman and mother. Her voice never ‘stops resonating’ (The Laugh of the Medusa) with questions women must continue to address, ‘I ask myself, I ask you, is this it?’ (‘A “Post-Feminist” Dawn’). Social value is also questioned in ‘Motherhood’ (The Meanest Flower), a sestina pointing out that ‘motherhood / shall be blessed but not mothers’.

Aesthetically there is a tangible connection with the visual arts in her work. 'Interiors' from Mirrorwork (1995), subtitled ‘After Edward Vuillard’, concentrates on the moment of ‘reassertion of a room’, the layering of interiors with meaning. Entries on Light (1997) demonstrates her intense impressionism, dealing in great depth with the effects of light on being. Yet this meditation is more than just visual as it addresses the tactility of human experience that ‘the eye can never see / but the sense can comprehend’.

Poetry to Calm Your Soul (2005), which she edited, can be seen as a treatise on Khalvati's beliefs about poetry’s purpose in contemporary life, and her inheritance of the complex range of traditions therein; the anthology spans hundreds of years and includes S.T. Coleridge, Basho and Wang Wei. There is an undeniable and wistful calmness pervading her own work which proves her own statement that poems ‘are dreaming spaces’ (Interview, Jean Sprackland, Autumn 2001, http://www.poetryclass.net/inter3.htm). Her poetry has a meditative quality, it has ‘nothing of the grandeur / or the violence of crowds’ but a more elegant ‘lifting, a soft and drifting / spiral’ (‘Prayer’, Mirrorwork) and is all the more powerful for it. Her work can be said to achieve ‘The Middle Tone’ (The Meanest Flower), an equilibrium between high aesthetics and human expressions of life, between cultural inheritances and personal experience, achieving balance of form, power and lyrical delicacy. Khalvati is a poet that achieves ‘My middle tone of dung and nectar, / flower and carrion, is a star / that fell, dust I too once kissed,’ with each poem taking a place in a constellation of stellar work grounded in the self.