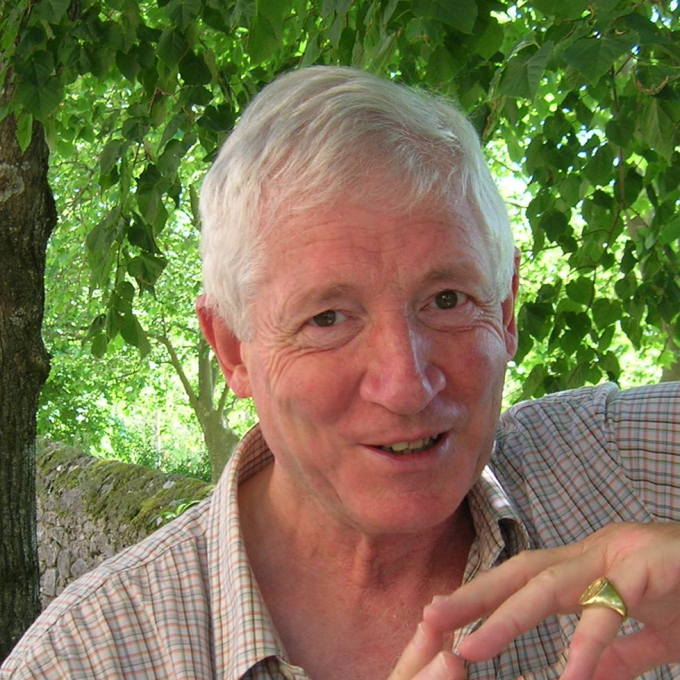 Kevin Crossley-Holland was born in 1941 in North Buckinghamshire and grew up in the Chilterns.

He worked as a poetry, fiction and children’s book editor for Macmillan at the beginning of his writing career, later becoming editorial director at Victor Gollancz, and is well-known for his poetry, novels, story collections, translations such as Beowulf (1982) and reinterpretations of medieval legends. He has also written and presented many radio programmes.

His work includes collaborations with composers Sir Arthur Bliss and William Mathias; and the libretti for two operas by Nicola LeFanu, The Green Children (1966) and The Wildman (1976), as well as a chamber opera about Nelson, Haydn and Emma Hamilton; and a stage play – The Wuffings (1999).

In addition to collections in which he retells traditional stories,  such as The Norse Myths (1980) and British Folk Tales (1987), he is the author of Storm (1985), winner of a Carnegie Medal, and shortlisted in 2007 for the Carnegie of Carnegies. He is also well-known for the Arthurian trilogy set in the Welsh Marches in the Middle Ages and comprising: The Seeing Stone (2000); At the Crossing-Places (2001) and King of the Middle March (2003). The Seeing Stone won several prizes, including the 2001 Guardian Children’s Fiction Prize, and was shortlisted for the Whitbread Children's Book Award, and the trilogy has been published in 23 languages.

He is the author of several volumes of poetry, and his Selected Poems was published in 2001.

Kevin Crossley-Holland is a Fellow of the Royal Society of Literature and an Honorary Fellow of St. Edmund Hall, Oxford. He lives in Norfolk.

A quick look through the above list of Kevin Crossley-Holland’s publications should be enough to indicate to the uninitiated that he is a creative writer in a fairly broad sense.

His achievements include winning the Guardian Children’s Fiction Prize for an Arthurian romance, The Seeing Stone (2000), writing operas in collaboration with composers such as Nicola LeFanu, and translating Old Norse and Old English texts, including the fascinating Exeter Riddle Book (1978) and Beowulf (1982), in a reader-friendly prose style suitable for children.

However, he is probably best known as a poet. After working for many years as an academic in London, Bavaria and Minnesota, Crossley-Holland moved in the 1990s to North Norfolk, but his fascination with medieval and Anglo-Saxon literature and history continues to inform his work – both in terms of subject matter and technique. He has recently stated: ‘It's years now since I translated from Anglo-Saxon. But when I write, it is always at my back and in my ear: an oral tradition; good, strong, quick, keen, earthed words; stress patterning as opposed to metric rhythm; alliteration and other music; the highly-wrought’. His best poetry is subtle, meditative, atmospheric and often spiritual, and has a quiet beauty all its own – much like the modest East Anglian landscape in which Crossley-Holland has now spent so much of his life. This is poetry that can usually be understood with the ear, and which benefits from reading out loud, like its Anglo-Saxon precedents. As well as the beautifully simple images in this excerpt from ‘An Approach to the Marsh’ (Time’s Oriel, 1983), note the long, mournful vowels, and the fleeting moments of assonance, sibilance and alliteration, as well as the enjambments that roll all together softly so that form echoes sense:

'This is no man’s land
that never belongs to earth or sea entirely:
now the flowing barley hemmed by screaming poppies,
a gull perched on a salt-rusted ploughshare
and a gull, a litter of blood-tarred feathers,
festering. A veil of butterflies, opalescent,
dips and quivers and rises, and I come to where
there is no going beyond.'

East Anglia has a rich medieval heritage, and Crossley-Holland’s work often amplifies the echoes of the region’s past. In the 1990s he co-wrote, with Ivan Cutting, The Wuffings (1999), a play about the early history of the Kingdom of the East Angles. Around the same time he published Poems from East Anglia (1997), which includes the poem ‘To the Edge’:

'To the scatter of a hamlet where nothing happens,
slowly. Sixty generations banked in the mud of
dogged minds.'

There is something very romantic about this, of course. But the depth of history can be expressed particularly effectively if one also emphasises a modern reality, dropping an anchor in the here and now, and this is also a landscape of ‘leaching chemicals / and uprooted hedges’.

North Norfolk is one of Britain’s many geographical outposts, albeit hardly the wildest of them, and this poet has an obvious affection for geographical extremities. It is as though a close proximity to the sea, and the edges of the land, can prompt a sense of spiritual oneness between disparate elements; and this is a source both of consolation and, in the purest sense, wonder. In ‘Dusk, Burnham-Overy-Staithe’ (The Rain-Giver, 1972), he remarks with awe:

'I only guess where marsh
finishes and sky begins,
each grows out of the other.'

And in ‘Swarm and Honeycomb’ (Selected Poems, 2001) the speaker contemplates universal spiritual questions, albeit in a less than typical manner, and finds a sort of stoic’s consolation in staring out to sea:

'Celtic mothers and Saxon fathers: their piety
most enviable because uncomplicated,
though hard-won. But who said anything
should be easy? Not the crusted stanchions
on the foreshore, nailing together earth, sea, sky.'

Other remoter geographical extremities are also evoked in his poetry, and there is usually a strong sense of history in these poems too. In ‘Orkney Girls’ (Waterslain: and other poems, 1986), the speaker finds himself at the Neolithic site of Skara Brae:

'In this sunken room
amongst dresser, hearth and cot,
shafted by sunlight, repossessed
after five thousand winters […].'

This poem provides a good example of how Crossley-Holland’s poetry often manages to be deeply personal and simultaneously present an aspect of a cultural history. It is often both readily accessible and illusory enough so that a careful reader will find himself scanning through reference sources now and again – often learning more about his own heritage in the process. The aforementioned ‘Swarm and Honeycomb’ begins with a section called ‘Mediterranean saints’, in which Crossley-Holland notes that ‘England’s a-buzz with saints!’: ‘how few / we know, and how little we care for them’. But these men and women can nonetheless be compared to the poet and his reader:

'Xystus the pope with a sword in his gut,
Yves the attorney and the housemaid Zita …
A flying alphabet! Hermit and cenobite,
anchoress and tertiary, but also the almost
unsuspecting – as if you, or I, were obliged
by circumstance to speak out and die.'

Spiritual dimensions are important to Crossley-Holland’s work, particularly in his more recent poetry. I have pointed out how his poetry about Norfolk and other geographical extremities can prompt meditations on the oneness of disparate elements, and this is true also of his poetry about God. In ‘And God said’ (Selected Poems, 2001), Crossley-Holland emphasises the centrality of God in all things:

'What opposes grace? Disgrace.
And brutality? Tenderness.
How can hate mother love?
What is the distance from no to yes?
They live in the interstices.
I live in all their choices.'

But his meditations are not infrequently underscored by a palpable sense of joy in simply being, and in spiritual connection. His poetry is full of yearning, hope, discovery:

'I still want.
Let me make and remake the word
which reveals itself,
unexpected, always various,
and be so curious
(affirmation’s mainspring)
I sing the language of yes.'