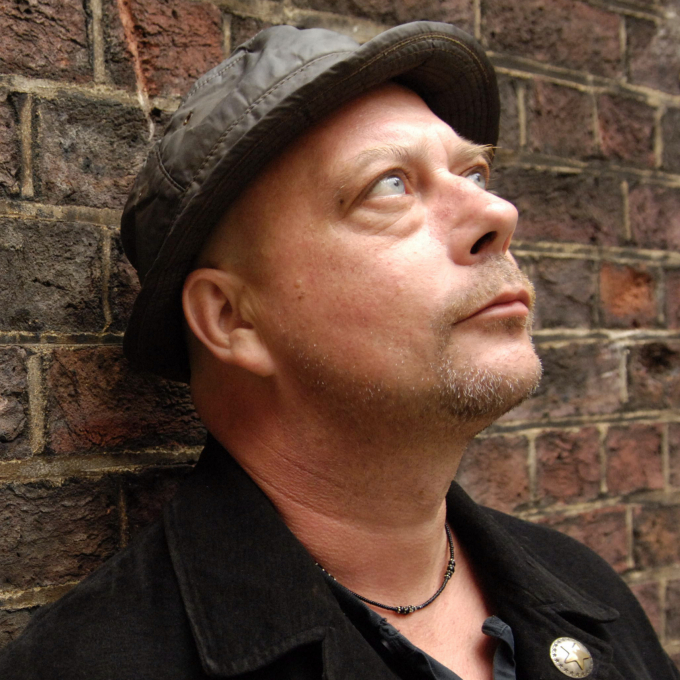 Kevin Brooks was born in 1959, grew up in Devon and now lives in North Yorkshire.

He studied psychology and philosophy at Birmingham Aston University, and Cultural Studies in London, and had a variety of jobs before becoming a full time writer.

He writes books for young adults, many of which have crime and thriller elements. Two of his books form the 'Johnny Delgado' series: Like Father, Like Son (2006) and Private Detective (2006).

His first novel, Martyn Pig (2002), a black comedy about a 15-year-old who decides not to tell the authorities when his alcoholic father dies accidentally, was shortlisted for a 2002 Carnegie Medal and won the 2003 Branford Boase Award. His second novel, Lucas, which tells the story of Caitlin, who falls in love with a mysterious boy with tragic consequences, was published in 2003, and won the 2004 North East Book Award .

Subsequent novels include Candy (2005), its eponymous heroine being a drug addict and prostitute, her tale told through the eyes of Joe, who falls in love with her; The Road of the Dead (2006), a tale of murder and revenge;  Black Rabbit Summer (2008), shortlisted for the 2009 Carnegie Medal, and Killing God (2009).

In 2014 his novel The Bunker Diary, about a group of children held hostage by an unseen torturer, was awarded the CILIP Carnegie Medal; he has since published books including The Devil's Angel (2014), Dumb Chocolate Eyes (2015), and Born Scared (2016).

On the contrary, they are usually dark, intense and powerful stories, influenced by Brooks’ own reading of thrillers and crime fiction. These genres have influenced his style as well as his subject matter - his novels are tightly plotted, gripping page-turners, which build up tension with skilful sophistication. Most of the novels are narrated in the first person by teenage characters who are, for the most part, multi-faceted, sympathetic and skilfully drawn, though they are often in dark and traumatic situations. Each of the novels is very different in its storyline, but there is a running theme of isolation, as characters often find that they are in some way an outsider, different from the norm. Although Brooks tackles difficult and sometimes controversial issues (child abuse, teenage prostitution, drug addiction, murder), his tone is never preachy or moralistic. He does not offer clear-cut answers, but rather explores and questions, encouraging readers to do the same. The author displays an acute sensitivity to the emotions and experiences of adolescence, and encourages empathy with his characters rather than judgement.

Martyn Pig (2002) enters very difficult territory for a Young Adult novel, but pulls it off superbly, creating a darkly comic novel. The protagonist of the title, bullied at school because of his unfortunate name, and abused at home by his alcoholic, violent father, reaches boiling-point when he finds himself once again on the receiving end of his father’s fists. Martyn’s attempt to defend himself triggers a terrible accident: ‘All I did was push away. I barely touched him. He must have been off balance, I suppose […] I can still hear the sound of it now. That sickening crack of bone on stone. I knew he was dead. Instantly. I knew.’ This is a gruesome storyline as Martyn and his friend Alex find themselves involved in all sorts of absurd situations in their attempt to conceal the body. Yet Brookes combines the serious matters of abuse and bullying with a sympathetic and likeable protagonist and a skilful use of black humour which lightens the subject matter without being flippant.

Lucas (2003) has a very different setting, but is equally gripping and dramatic. There is isolation in both setting and circumstance - the location is Hale Island, separate from the mainland, while Lucas, a rather mystical character, is the outsider, treated with suspicion by the locals. While Caitlin, the narrator, falls in love with Lucas, others in the community wrongly accuse him of a sexual assault, and the novel thus explores the workings of group mentality, particularly the fear of ‘otherness’ which can lead to terrible persecution. As always, Brookes maximises the potential of first-person narration so that the story does not simply offer a limited view. Caitlin is a perceptive and intelligent teenager who has already made a decision not to ‘follow the pack’, even before Lucas’ arrival. Her narrative therefore offers acute insights into not just her own character but that of the people and society around her.

The protagonist of Kissing the Rain (2004) is another outsider. 15-year-old Moo Nelson (a male character) is seriously overweight and severely bullied because of it. The ‘rain’ of the title is Moo’s term for the daily onslaught of abuse that is hurled at him - he copes (or tries to) by ‘umbrellarising’ it. For Moo, like Martyn Pig, it is not just other children who make his life a misery - when he witnesses (or partially witnesses) a road-rage murder, he is bullied and blackmailed by the police who want him to lie in court, and simultaneously let down by inadequate parents who are unable to offer support as he struggles with the burden of the terrible decision he has to make. Thus, Brookes is not afraid to explore the dark side of life - not just overt horrors such as murder and corruption, but the terrifying reality faced by some children and teenagers of being surrounded by adults who are abusive or dishonest or simply too weak to offer emotional support. Moo’s narration is sometimes confused and disorientated - in contrast to that of Caitlin in Lucas - but this is extremely effective in reflecting his state of mind. Brooks does not opt for neat happy endings either - Caitlin in Lucas experiences heartbreak, though her relationship with her father has improved, while Moo’s future looks bleak.

Brooks has a remarkable ability to probe similar themes through distinctly different settings, storylines and characters. Candy (2005) explores fear and darkness through the depiction of the ‘underworld’ of teenage prostitution and drug addiction. Candy is from a ‘respectable’ family, and thus her descent into a nightmarish existence, controlled by her pimp, raises questions about the nature of ‘respectability’ as well as the more obviously dark nature of the underworld she now inhabits. Candy also explores addiction in its many forms. Although Candy’s addiction to drugs shows her loss of control, there are many other forms of addiction - most notably, Joe, the narrator of the story, is deeply in love with Candy and this is an equally powerful addiction which can also lead to loss of control. Brooks, therefore, skilfully weaves many different strands into his stories, often suggesting how easily any of us can become vulnerable to dark forces, and thus shifting the reader out of the comfortable view that the world of fear and darkness is ‘over there’.

The Road of the Dead (2006) features another sinister underworld, as the title implies. The novel shows the influence of the Western genre, though it has an English setting, Dartmoor, which is evoked as a bleak and harrowing place. Two brothers, Ruben and Cole, seek justice for their sister Rachel who has been raped and murdered. Although the brothers and their grief are depicted sympathetically, they are not without vice and this is quite a disturbing novel, pervaded by violence and sinister goings-on. In this and various novels, Brooks has a tendency to veer into the supernatural, though this is usually interwoven very carefully without detracting from the realism of the story. Lucas (discussed above) hints at mystical, otherworldly qualities in the title character, while Ruben, the narrator of The Road of the Dead, possesses some clairvoyance and supernatural powers, which works on two levels: it gives the novel an eerie tone which increases tension, while also expanding the limitations of Ruben’s first-person narrative - he can, for example, perceive others’ thoughts.

In Black Rabbit Summer (2008), Brooks once again creates a new setting in which to place a story of fear and suspense, and this one is particularly chilling. It centres on a group of teenage friends who meet one summer’s night ‘for old times’ sake’ - but spiked drinks lead to a night of terror which leaves two people missing. It is a crime story and a psychological thriller: Brooks’ depiction of the psychological dynamics amongst the group of friends is acutely perceptive, and the emergence of tensions and old rivalries between them builds up the suspense, layer by layer, with chilling sophistication.

Killing God (2009) has some similarities with Candy - the storyline is very different, but both these novels explore the many diverse ways that addiction can manifest. Dawn is 15, and her father is a former criminal and drug addict. He then turns to religion and becomes a born-again Christian, but this too becomes a new form of addiction which takes him away from his family, leaving Dawn with intense anger towards the God who, in her view, has deprived her of someone she loves. Like Martyn Pig, this is a black comedy with a likeable and perceptive protagonist who is struggling with inadequate parents who have failed her. Dawn determines to read up about God and Christianity in order to understand her ‘enemy’ and thus ‘kill’ God (that is, disprove God’s existence). Yet though the novel debates and questions the existence of God, its poignancy is that this is really Dawn’s way of coping with the pain of her father’s disappearance, and she is perceptive enough to understand this:

'It doesn’t mean anything, OK? Killing God - it doesn’t mean anything. It’s just a thing, that’s all. Just an idea, something to do, something to keep me occupied. (And no, it’s not a New Year’s resolution either.) I just like doing things that keep my mind off the things I don’t want to think about (or, to be more specific, the thing I don’t want to think about).'