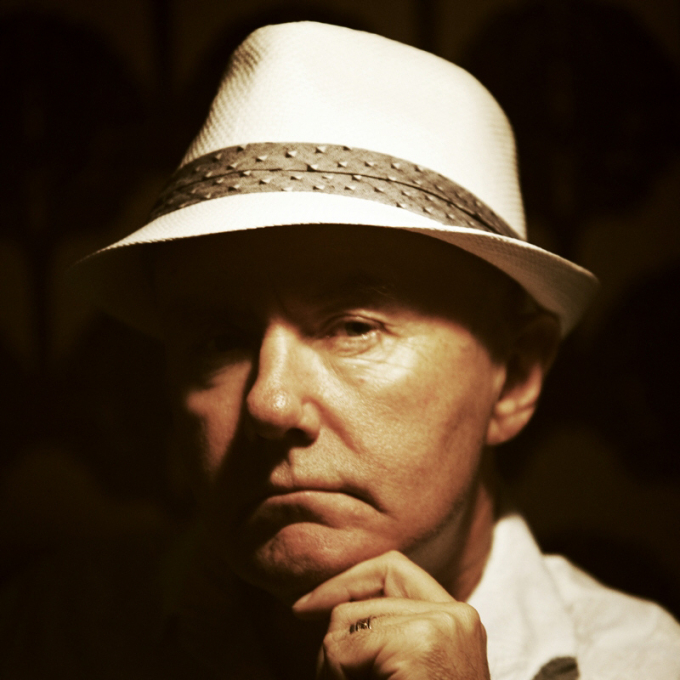 Irvine Welsh was born in Edinburgh in 1958.

He lived in London after leaving school, but returned to his native city where he worked in the Council's housing department. He gained a degree in computer science and studied for an MBA at Heriot Watt University. His first novel, Trainspotting (1993), a blackly comic portrait of a group of young heroin users living in Edinburgh in the 1980s, was adapted as a film directed by Danny Boyle, starring Ewan McGregor and Robert Carlyle, in 1996. The Acid House, a collection of short stories, was published in 1994 and was followed by Welsh's second novel, Marabou Stork Nightmares (1995), a harrowing stream-of-consciousness narrated by football hooligan Roy Strang. Ecstasy: Three Tales of Chemical Romance, a collection of three novellas, was published in 1996, and a third novel, Filth, a vivid account of the violent adventures of a bigoted, racist and corrupt Scottish policeman, was published in 1998. Glue (2001), is the story of four boys growing up in an Edinburgh housing estate. Porno, a sequel to Trainspotting, was published in 2002.Welsh is also the author of the plays, Headstate (1994) ; You'll Have Had Your Hole (1998); and Babylon Heights (2006), written with Dean Cavanagh. He has also written the screenplays for three original films and four short films. The books Ecstasy, Glue, Filth, Trainspotting and Marabou Stork Nights, have all been adapted for the stage and The Acid House and Ecstasy have been made into films.His journalism includes a column for Loaded magazine and occasional articles for The Guardian. He is also a DJ and has recorded a single with rock group Primal Scream. In February 2003 he began writing a Monday column for the Daily Telegraph.Later books include The Bedroom Secrets of the Master Chefs (2006);  and If You Liked School You'll Love Work (2007). His novel, Crime, was published in 2008 and his latest collection of stories is Reheated Cabbage (2009). He has recently branched into film, and is a partner in two film production companies.

The Sex Lives of Siamese Twins (2014) is described by the Independent as ‘[eviscerating] Western society’s great…obsessions with food, health, sex and emotional perfection’. Set in Miami, it examines the effects of fame on a woman lauded as a ‘hero’ after her role in disarming a gunman.

He lives in Chicago.

A Decent Ride appeared in 2015 and was followed by The Blade Artist (2016). In late 2015, Welsh went with the British Council to FIL, Guadalajara International Book Fair, Mexico, and also to Peru.

Two common complaints of literary reviewers when considering the work of Welsh are that his books are read by people who don’t normally read and that their author has a negative view of literature (he prefers the title ‘cultural activist’ to ‘writer’).

If either of these claims is true, then they perhaps deserve more credit than lofty condemnation. If Welsh really is managing to engage a culturally illiterate audience that has traditionally remained beyond the influence of the bourgeois novel then this is a form of ‘cultural activism’ most other ‘writers’ of his generation seem to have turned their backs on.Although Trainspotting (1993) was longlisted for the Booker prize, Welsh’s writing belongs more accurately to the realm of the ‘popular’. By ‘popular’ I am not necessarily thinking of sales figures, but of the grotesque, carnivalesque imagery for which his work has become notorious. The emphasis of his novels, short stories and screenplays is on what Carl Ewart, a character in Glue (2001) describes as 'tales of excreta and ejecta – shite, pish and puke'. It is no surprise that some of the central images of the film adaptation of Trainspotting involve unforgettably graphic acts of bodily expulsion, from the soiled sheets of Spud, to Renton’s unfortunate expulsion of his own drugs down a filthy pub toilet.Welsh’s books are equally well-known for their gatherings of junkies and drug dealers, prostitutes and pimps, psychos and scam artists, a cast made famous within his best selling debut novel, Trainspotting. The book is set in Edinburgh - not the tourist Edinburgh of Princes Street and the Royal Mile (what Welsh refers to derisively as 'shortbread disneyland') - but the geographical and metaphorical outskirts of the capital: the deprived and depressed underside of Leith. So why ‘trainspotting’? Near the end of the text, Begbie and Renton take a ‘pish’ in Leith’s defunct Central Station. It is one of the rare, oblique references to ‘trainspotting’ in a novel whose title is said to revolve around the joke (Welsh likes his ‘in’ jokes) that Leith has not had a rail link for decades.If ‘trainspotting’ on one level appears to be an allusion to the social division between Leith and commercial Edinburgh (Welsh is a regular critic of the Edinburgh Festival on these grounds), then his novels are free from a nostalgic or sentimental vision of working-class Scotland. His is a post-Thatcher landscape in which traditional community relations have broken down. There is a lack of male solidarity – key to earlier post-war working-class fiction - to be found in Welsh’s writing. Begbie is as big a danger to his ‘pals’ as he is to the Edinburgh toffs he stumbles into in the city bars.In 1994, Welsh's short story collection, The Acid House, was published. The language of these tales, written in an unrelenting and aggressively masculine Scots dialect, has since become a trademark of Welsh’s fiction. Considered by some as the main strength of his prose (Welsh, some claim, has an ‘ear’ for the urban underclass of Leith), by others as strained and inauthentic, what is clear is that the repetition and excess associated with its ‘bad language’ serves more than a ‘realistic’ purpose. It is through the inarticulate outbursts of his characters that their powerlessness is most eloquently and symbolically expressed. More recent short story collections include If You Liked School, You'll Love Work (2007) and Reheated Cabbage (2009). The former is an eclectic collection, stitched together by lurid sex acts, the latter, a recollection of (mostly) older stories and formerly pulished pieces, including, for diehard Trainspotting fans, a festive encounter with Begbie.

Marabou Stork Nightmares (1995), Welsh’s second novel, followed quickly (some say too quickly) on the heels of the first. A rambling narrative (but then these are nightmares), it is structured around the memories of a football hooligan who is unconscious in hospital. Marabou was followed soon after by Ecstasy (1996), a collection of three novellas and critically the least successful of his books. Welsh had to wait until 1998 and the publication of Filth (1998) before receiving warmer reviews. The filth of Filth refers principally to Detective Sergeant Bruce Robertson. However, the title is not just a nod to the content of the book but to its form, its textuality. Filth is both the subject of the book and a reference to the book itself. The title demands we read it literally. If filth is a metaphorical reference to the police (Bruce Robertson works for Lothian and Borders force), then Robertson is ‘filth’ in a more literal sense: a serial rapist, thief, and drug abuser. If trains are pretty much absent from Trainspotting then glue is about the only substance not taken by the characters of Glue (2001), one of Welsh’s most adventurous novels to date. Like Marabou Stork Nightmares, Glue centres on the lives of a group of Edinburgh ‘schemies’ and charts the coming of age of four young men over four decades and over 400 pages.Porno (2002) is a return to the fictional world of Trainspotting that made him famous a decade earlier, and has been hailed by many critics as a return to form. The novel progresses plausibly from where Trainspotting left off. Renton is now living in Amsterdam. Begbie is in jail. Sick Boy works in a strip joint. Meanwhile Spud, in the most unlikely career move of all has decided to write a book. When the group come back together, it is not long before another money making scam begins to emerge. The title provides you with all the clues you need.

Welsh’s mid-decade work was dominated by a couple of collaborative efforts including Babylon Heights (with Dean Cavanagh, 2006), and One City (with Ian Rankin and Alexander McCall Smith, 2006). Babylon Heights is a bizarre but extremely funny play. Spinning off from The Wizard of Oz, it imagines four munchkins in a Californian Hotel room getting high on drugs and alcohol. One City is a collection of three stories, one of them by Welsh, written for the One City charity, which seeks to combat social exclusion in the city.

The Bedroom Secrets of the Master Chefs (2006) unfolds during the US elections of 2004, and in tandem with the unfolding of Edinburgh-based Health Officer, Danny Skinner’s unhealthy obsession with tv programme ‘The Secrets of Masterchef’. It is an obsession that takes Danny to America in a narrative exploring the conjunctions between food, pornography and celebrity. Described in the Financial Times as ‘Welsh at his best’, The Bedroom Secrets of the Master Chefs was hailed by various critics as a return to form.

In his tenth and most recent novel, Crime (2008), Welsh opts for one of his trademark titles: a single word, a blunt literalism. However, beneath the in your face cover is a surprisingly restrained handling of a risqué (even for Welsh) subject: paedophile rings. Ray Lennox, formerly of Filth, is a policeman who ends up in America on the trail of a serial child abuser. It is a book that is currently dividing the critics, as The New York Times summarised: ‘Crime is an ambitious, compassionate and serious book; many of Welsh’s fans, however, will miss the trash talk, the perverse comedy and, yes, even the spastics.’

@IrvineWelsh @markydownie122 Fuck off Mark I love you bro.
(9 hours ago)

@IrvineWelsh Let’s face facts. It’s all about @HibernianFC @WestHam @bfcdublin and @AFCAjax Nothing else matters.
(9 hours ago)