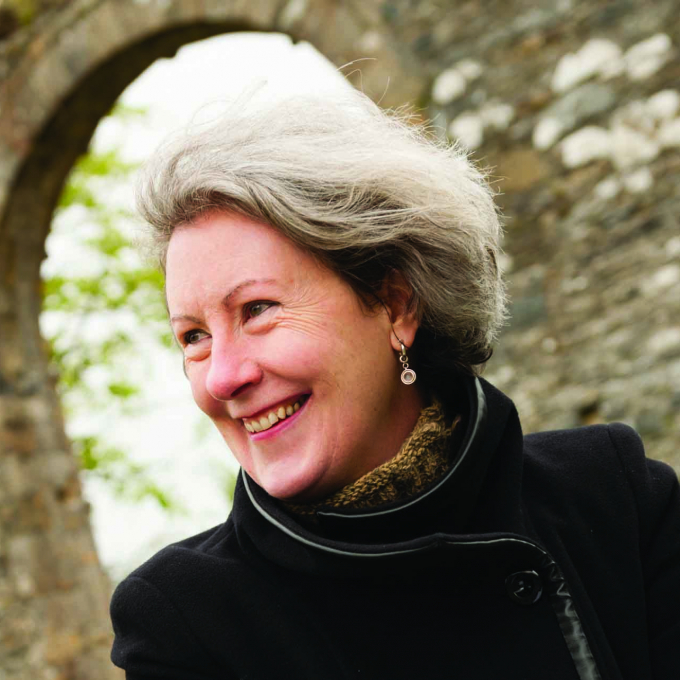 Poet Gwyneth Lewis was born in 1959 in Cardiff, Wales.

She attended a bilingual school in Pontypridd and studied English at Cambridge University. She studied at Harvard and Columbia, was a Harkness Fellow and worked as a freelance journalist in New York. She returned to Britain and worked in television. In 2001 she was awarded a £75,000 grant by the National Endowment for Science, Technology and the Arts (NESTA) to carry out research and to sail to ports that are linked historically with the inhabitants of her native city, Cardiff. Gwyneth Lewis writes both in Welsh, her first language, and in English.

Her first collection written in English, Parables & Faxes (1995), was shortlisted for the Forward Prize (Best First Collection) and won the Aldeburgh Poetry Festival Prize. She won an Eric Gregory Award in 1988. Zero Gravity (1998) was shortlisted for the Forward Poetry Prize (Best Poetry Collection of the Year) and was a Poetry Book Society Recommendation. The poems in the collection were inspired by the work of her cousin, Joe Tanner, an astronaut, who worked on the Hubble telescope in 1997. Y Llofrudd Iaith (2000) won the Arts Council of Wales Book of the Year Award.

Her first non-fiction prose book, Sunbathing in the Rain: A Cheerful Book on Depression, the author's account of beating her depression, was published in 2002. She also wrote about her personal battles in er poetry collection Keeping Mum (2003) subtitled 'Voices from Therapy'. These were followed by Two in a Boat: A Marital Voyage (2005), a sailing memoir.

In 2004, Gwyneth Lewis was named as one of the Poetry Book Society's 'Next Generation' poets. She wrote the inscription above the Wales Millennium Centre, and has recently written an oratorio, The Most Beautiful Man from the Sea, with music by Richard Chew and Orlando Gough. She is a fellow of the Royal Society of Literature, a member of the Welsh Academi and a NESTA Fellow. Recent books are: A Hospital Odyssey (2010), which takes the form of an epic poem about a journey through illness; The Meat Tree (2010), a book in the 'Tales of the Mabinogion' series; Sparrow Tree (2011), which was shortlisted for the 2012 Wales Book of the Year Award; and Y Storm (2012) Lewis's translation of Shakespeare's The Tempest.

Gwyneth Lewis' mark on the landscape of Welsh poetry since the publication of her first collection written in Cymraeg in 1977 is best evidenced on the impressive frontage of the Wales Millennium Centre.

Six foot letters form verse in Welsh and English (what she calls her 'mother' and 'step-mother' tongues respectively) and indicate the stature she occupies in the poetry communities of those languages, and beyond. Robert Minhinnick, a poet of high standing in his own right, introduces his translations of Lewis' poems in The Adulterer's Tongue: An Anthology of Welsh Poetry in Translation (2003) by stating that 'no other poet in the UK works to such a high level in two languages'.Her factual non-fiction, Sunbathing in the Rain: A Cheerful Book About Depression (2002) and Two in a Boat: A Marital Rite of Passage (2005), is based on experiences in her life, and contains poetic touches of literary skill.

Unsurprisingly for a bilingual poet, her work demonstrates that poetry is an art form concerned with language, specifically language's tense relationship to the self and its environment. In 'Tongue Fetishist' (Keeping Mum, 2003) the speaker indicates an unhealthy predilection for 'the flesh for talking', coaxing the addressee to 'Come closer. Say Aah ...'. The erotic charge of communication is compellingly displayed elsewhere, for example in 'Mother Tongue' (Keeping Mum) where the speaker lustily declares 'Umlauts make me sweat, / so I need a multilingual man'. This desire for linguistic potency is shared by other contemporary women poets, for example Carol Ann Duffy in Rapture (2005).

The potentially subversive nature of the Welsh language is a recurring theme. In 'The Language Murderer' (Keeping Mum), a sequence in English based on an earlier Welsh, Y Llofrudd Iaith (2000), borrows a melodramatic murder mystery plot, conveying effectively a political message. The victim is the Welsh language personified as an elderly lady. The murder of English's feminized 'other' is violently depicted; 'The end was dreadful. Inside a dam burst / and blood was everywhere' ('Her End', Keeping Mum). Formally, Lewis' sounds often echo the consonantal alliteration of Welsh poetry, and in one instance in 'Consultant' she uses the Welsh half rhyme, the proest (where the consonants stay the same and the vowel sound changes), by ending a couplet with 'translate' and 'tolerate'. In 'Welsh Espionage' (Parables & Faxes, 1995) the speaker relates a dream when 'they took me in for questioning'. Given the plot of 'The Language Murderer' it seems fair to suggest that the addressee of 'Welsh Espionage' is the Welsh language, making 'the treason of telling' a risk. Language is ultimately betrayed by those who choose not to speak it, who crave 'the bite of another language's smoke' ('Mother Tongue', Keeping Mum).

Lewis' originality is evidenced in her ability to sustain themes in longer poems or sequences of poems. Such exploration of themes through connected poems can be seen in Zero Gravity (1998) which explores modernity through poems ostensibly 'to commemorate the voyage of my cousin Joe Tanner and the crew of Space Shuttle STS-82'. Immediately from the 'Prologue' section, we find that this is also a pioneering and philosophical piece when the speaker states:

'My theme is change.[…]
See how speed
transforms us? Didn't you know
that time's a fiction?'

'Chaotic Angels' (Keeping Mum) is a sequence commissioned by the City of London Festival in 2002 as a response to the Angel Series of concerts. The twelve poems address a variety of Lewis' concerns; ranging from depression, 'I'm broken but my limp / is the best part of me' ('Angel of Depression'), through the sustaining power of music, 'Melody, for once, has overcome fire' ('Fire Angel') to the promise of faith, 'Not to mind hurting because you see / Christ bringing cool dock leaves of mercy' ('Christ as Angel of the Will of God'). This sequence is perhaps the most overtly religious of Lewis' work, but from 'Herod's Palace', we see that theology has been a concern for many years, 'mercy's a mystery, and takes time to see' (Parables & Faxes).

Lewis is also a talented essayist, particularly when addressing poetics as in 'Whose Coat is that Jacket? Whose Hat is that Cap?' where she notes that 'poetry isn't about being poetical, it's about telling things as they are'. This direct and artful style is compellingly sustained in her non-fiction works Sunbathing in the Rain and Two in a Boat. Both these texts borrow the emotional frankness of her poetry – what she describes as 'depressive realism' in Sunbathing in the Rain - to tell about her personal experiences of debilitating depression and marital strain.

Sunbathing in the Rain is a text as much about self-knowledge as the experience of depression; it relies heavily on biographical experiences in Wales, England and New York. The text is unconventional, weaving amidst biography thoughts on faith, poetry and language, and quoting extensively from medical texts, theologians and poets like Blake and Rilke. Even more unorthodox is the message of the text: 'Please don't let all that suffering go to waste […] People who ignore depression are the ones who go mad, not those who go through it and treat it with the respect it deserves'. This is a message we come to see has been hard won.

Two in a Boat charts simultaneous voyages; Lewis and her husband learn to sail and set off on a seafaring adventure. Yet, aside from the tidal surges and fearful encounters with rocks, ships and dodgey engine repair men, it is the relationship between Lewis, the 'useless' Skipper, and her husband, 'Captain Bastard', that is central. It isn't that meeting sailing celebrity Ellen MacArthur, day trips ashore and the practicalities of splicing are dull, they are very well drawn, but even those who can't tell the difference between tying a clove hitch and a shoe lace can connect with the human aspect of this book. Lewis notes that 'By undertaking this voyage […] we had placed ourselves in busy psychological shipping lanes. We were going to need new methods of navigation, alternative ways of seeing our way, if we were to get into port safely'. Two in Boat is a book with lots of weather, waves, vomit and engine trouble – but ultimately, lots of love. Lewis is a writer with a sense of adventure; all of her work probes the contemporary self with unflinching honesty, and she is a writer readers should allow to accompany them on their own voyages.

'I started writing poetry when I was seven years old. It had rained a good deal during a school holiday, preventing us from playing outside, so I decided to write a long poem about the rain instead. Many of my happiest moments since have been spent in the same way - sitting at a table, chewing the top of a pen, trying to let words take me where they want to.

I think of writing as being a third eye which helps me to make sense of my life. Without it, and the routes it offers me into my subconscious, I seem to live less richly and certainly less wisely. Poetry requires an act of deep listening - to yourself, your body, to words and, even, to the silence which surrounds them. I don't know what I'd do without it.'

@Lewispoet Am very grateful to accept the honour of an MBE for services to literature, who would have thought? Diolch am anr… https://t.co/grQrfkeCUo
(1 months ago)

@Lewispoet RT @MigraineTrust: We want to raise greater awareness of the huge impact #migraine can have throughout a woman's life, from decisions aroun…
(3 months ago)

@Lewispoet RT @dedalusdenaries: ‘This book is thrilling: it leaves the reader scrambling for ground: Is every possible interpretation or nuance about…
(5 months ago)

@Lewispoet @RC_EnwauLleoedd So glad you're doing this, thanks for letting me know.
(5 months ago)