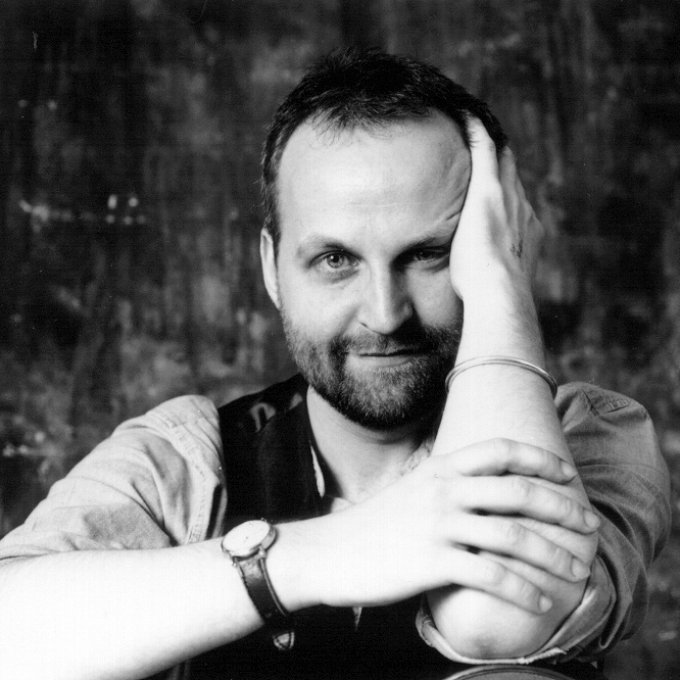 Poet, writer and musician Don Paterson was born in Dundee, Scotland, in 1963.

He won an Eric Gregory Award in 1990 and his poem 'A Private Bottling' won the Arvon Foundation International Poetry Competition in 1993. He was included on the list of 20 poets chosen for the Poetry Society's 'New Generation Poets' promotion in 1994. In 2002 he was awarded a Scottish Arts Council Creative Scotland Award. His first collection of poetry, Nil Nil (1993), won the Forward Poetry Prize for Best First Collection. God's Gift to Women (1997) won the T. S. Eliot Prize and the Geoffrey Faber Memorial Prize, and The Eyes, adaptations of the work of Spanish poet Antonio Machado (1875-1939), was published in 1999. He is also editor of 101 Sonnets: From Shakespeare to Heaney (1999) and of Last Words: New Poetry for the New Century (1999) with Jo Shapcott. His plays include The Land of Cakes and A'body's Aberdee, both performed by Dundee Repertory Theatre. His collection of poems, Landing Light (2003), won both the 2003 T. S. Eliot Prize and the 2003 Whitbread Poetry Award. In 2008, he won the Forward Poetry Prize (Best Single Poem) and was awarded an OBE.

Sonnets to Orpheus, his version of Rilke's Die Sonette an Orpheus, was published in 2006. Recent books are Best Thoughts, Worst Thoughts: On Art, Sex, Work and Death (2008); and the poetry collection, Rain (2009), winner of the 2009 Forward Poetry Prize (Best Poetry Collection of the Year). He was awarded the Queen's Gold Medal for Poetry in 2010.

Don Paterson teaches at the University of St Andrews, and is poetry editor for the London publishers, Picador. An accomplished jazz guitarist, he works solo and with the jazz-folk ensemble, Lammas. He lives in Dundee, Scotland.

Don Paterson's Selected Poems was published in 2012, followed by his most recent collection, 40 Sonnets, in 2015. 40 Sonnets was shortlisted for the T.S. Eliot Prize and the Griffin Poetry Prize, and won the Costa Prize for Poetry.

As Catherine Lockerbie has noted of Don Paterson, he is one of the most talented British poets of his 1960s-born generation: a decade long writing career that has thus far attracted a dedicated readership and a veritable cornucopia of awards and prizes.

His fierce ambition is undeniable: aside a sharp, witty and distinctive poetic voice, Paterson’s formal dexterity and dedication to poetic tradition are combined with contemporary postmodernist elements, producing poems of cutting-edge relevance, but also of intense, MacNeiceian lyrical beauty. His first collection, Nil Nil (1993), spans a dream-like, though nonetheless caustically real world of love, booze, sex and muted violence, whilst introducing the doppelganger trope that has remained a constant fascination and source of inspiration within his work. This is most evident in ‘The Ferryman’s Arms’, a narrative of precise and vivid description that sees the poet taking himself on at a game of snooker, only to emerge as both victor and loser, or more subtly in the sinister ‘Bedfellows’, where the insomniac narrator ruminates on the bed’s ‘last incumbent’: ‘his greasy head’ and ‘suffocated voice resum[ing] / its dreary innuendo: / there are other ways to leave the room / than the door and the window’.

Such veiled intellectual and philosophical concerns are trademarks in Paterson’s work. But Nil Nil also showcases a highly attuned inventiveness in its diversity: blunt, confrontational poems about background and upbringing (no doubt influenced by the poetry of Tony Harrison) placed alongside playful postmodern epics such as ‘The Alexandrian Library’ and the collection’s title poem. Unsurprisingly, this has prompted many critics to make comparisons with the long poems of Paul Muldoon, but as Patrick Crotty has pointed out, Paterson’s preference for the psychological and metaphysical over the social and satirical makes Derek Mahon a more convincing Irish influence. The latter poems also introduce readers to Paterson’s most persistent alter-ego, Francois Aussemain, a fabricated continental literary theorist and Borges-esque figure whose half-profound, half-ridiculous philosophising makes for several portentous epigraphs that span across Paterson’s work.

In his second collection, God’s Gift to Women (1997), such literary cheek and sassiness saw no stopping. ‘On Going to Meet a Zen Master in the Kyushu Mountains and Not Finding Him’ is a poem in title alone, giving way to a blank page that seems to offer a flippant if ambiguously spiritual commentary on Derridean deconstructions of presence and absence. But while comedy, fanciful turns and wilful aggrandizement may seem to dominate – in the how-serious-should-you-take-me tone of ‘from 1001 Nights: The Early Years’, or the lad accidentally filming himself masturbating while bootlegging a porno in ‘Postmodern’ – the collection also harbours an inherent directness and purposefulness (‘A poem is a little church, remember, / you, its congregation, I, its cantor’), not to mention a recurrent obssession with religious and existential concerns. In ‘Addenda’, this manifests itself as emotional restraint and a deft lyrical economy in affecting imaginings of the lost life of the poet’s brother, while the Arvon prize-winning poem ‘A Private Bottling’, perhaps the strongest of the collection, questions life, love and God in the sampling of ‘extinct malts’ and whiskies, where ‘each square glass / [marks] the tincture of a failed geography’. But while God’s Gift may end with the last in a muddled sequence of poems that take their titles from the defunct Dundee-Newtyle railway line, not even this poem’s mid-parentheses, mid-sentence, ostentatious ending can disguise its revelatory weight and significance: the white page of its printing likened to snow, which in turn becomes a deity’s ‘shredded evidence’, falling from the skies.

Previous conflicts between Paterson’s lyrical addressing of the ‘big’ philosophical questions and the demands of the postmodern zeitgeist are neatly sidestepped in a third collection, The Eyes (1999), a volume that comprises of loose versions of Antonio Machado’s poems. For a poet who is known for his scepticism of poetry in translation, their emotional candour and concentrated beauty is impressive: ‘Let that pure source / that pours its empty heart out to us pour / through my heart too; and let the turbid river / of every heartless faith dry up for ever’ (‘Profession of Faith’). But with Landing Light (2003), Paterson’s fourth collection and winner of both the Whitbread and T.S. Eliot Prize,  the poet’s own voice fully succeeds in reconciling contemporary subject matters with its traditional lyrical tendencies. In many cases, this appears in balancing acts between past and present, or of seemingly incompatible topics: ‘Letter to the Twins’, for example, is an erotic poem addressed to Romulus and Remus as well as to the poet’s own two sons, and details with grace, care and subtlety ‘the honouring of [one’s] lover’ in bold yet strangely beautiful descriptions of the clitoris, cunnilingus and penetrative sex. Two sonnets, ‘Waking with Russell’ and ‘The Thread’, further extend this paternal theme (as well as the illuminated runway of a plane coming into land, the collection’s title is notably suggestive of the light left on for sleeping children at night). The former, in its ‘waking amongst men’, delights in the morning smile of the narrator’s four-day-old son, while the latter explores the fragilities of that which families hold dearest (‘Now the thread / is holding all of us: look at our tiny house, / son, the white dot of your mother waving’).

Aside discovering a more emotional timbre and lyrical tenderness in his poetic voice, however, Paterson’s trademark wit and inventiveness continue to flourish in Landing Light. In ‘The Reading’, for example, a humorous mock fable with an ambiguous classical setting, an underpaid poet is spared the near-biblical fate of his listeners (namely ‘a great thunderbolt [bringing the banquet hall] down on the lot of them’), while the long conversational poem ‘A Talking Book’ sees a sharp and mischievous imperative voice poke fun at writers, editors and academics, before pulling apart the reader’s worldly philosophical concepts (‘There is no wall. Pick up your bed. Walk through it. / Last chance, friend. So do it or don’t do it.’) One of the more understated successes of the collection, ‘The Rat’, also demonstrates Paterson’s ability to write honestly and resourcefully about the mysterious process of writing itself, in which a young writer who is ‘not much good’ produces ‘the best poem ever written’: something that becomes the source of much dissatisfaction on the part of his indignant literary superiors.

Generally speaking, Paterson’s strong ear for rhythm and understanding of the ‘sense in sound’ (the subject of his recent and controversial essay in Poetry Review) are partly attributable to his background in music: as a professional musician he has toured with the jazz-folk ensemble Lammas for many years, a line-up that once included the late American poet Michael Donaghy. But besides music and his own poetry, Paterson is also a prolific editor: most notably, his 101 Sonnets: From Shakespeare to Heaney (1999) makes for an illuminating discussion and varied selection from the form’s rich history, and he continues to edit the poetry list for Picador. He has also published two books of aphorism, The Book of Shadows (2004) and The Blind Eye: A Book of Late Advice (2007), both of which reveal a gift for writing lightly on weighty issues, producing work that the popular philosopher Alain de Botton has described as ‘supremely wise and moving’. Paterson’s latest collection of poems, translated versions of Rilke’s Sonnets to Orpheus (2006), has also been widely admired and critically well-received, restoring to Rilke’s masterwork what Mark Doty calls ‘an unsettling, destabilising force’. Where Paterson’s poetry will take him – and for that matter the reader – next is anyone’s guess, then, but his ample abilities and often startling ingenuity promise to make the journey an inspired and exciting one.