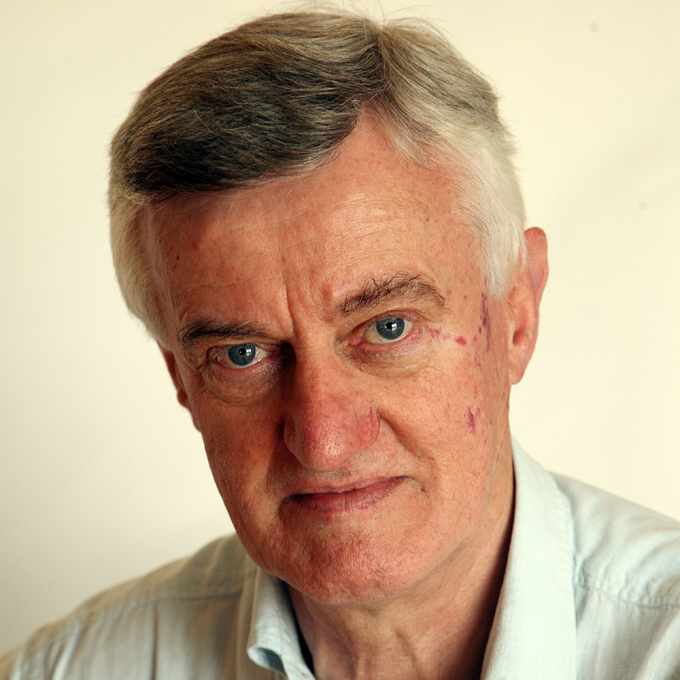 Bernard O'Donoghue was born in Cullen, County Cork, in 1945, later moving to Manchester.

He studied Medieval English at Oxford University, where he is a teacher and Fellow in English at Wadham College.

Bernard O'Donoghue received a Cholmondeley Award in 2009. His most recent poetry collections are Farmers Cross (2011) and The Seasons of Cullen Church (2016), both of which were shortlisted for the T. S. Eliot Prize.

‘The Owls at Willie Mac’s’, from the collection Here Nor There (1999) is emblematic of the persistently elegiac strain in Bernard O’Donoghue’s poetry.

On a late summer night, its speaker hears owls calling across the fields and becomes aware of another person, pushing a bicycle, beside him: ‘I could smell the warmth / And kind breath of Nugget Plug [tobacco] and Guinness’. This presence, who may be a ghost or a memory, is referred to only as a ‘dark-dressed, nearly extinct escaper / From the nineteen-fifties Saturday night’. Their exchange about the owls is made poignant by a conclusion in which the presence is revealed ‘as he would be three months ahead, / Stretched in the road like the thirsty bittern / By a car that could hardly be expected / To pick him out against a wintering sky’. The rural Irish setting, homely details recalled from the past, and above all the low-key acceptance of mortality: all these are typical features of O’Donoghue’s quietly moving poems.

Bernard O’Donoghue is a leading Irish poet, critic, and anthologist, whose literary and academic career has been conducted in Oxford since the mid-1960s. His ‘day job’ teaching Mediaeval Literature has resulted in a number of scholarly works, notably his anthology The Courtly Love Tradition (1982), a selection of European love poetry mostly of the 12th to 13th centuries from Latin, Provencal and Italian sources including the troubadours, Cavalcanti and Dante. More recently he has produced a translation of Sir Gawain and the Green Knight (2006), praised by Seamus Heaney in the Irish Times as the work of ‘a scholar and a gentleman’. O’Donoghue’s scholarship has influenced his own poetry; he once remarked that ‘The Anglo-Saxon elegies are my model for the perfectly formed lyric poem’. A number of his collections contain versions of passages from Dante and Piers Plowman; or have covers taken from Mediaeval art.

His friend, fellow Irish poet and Oxford academic Tom Paulin has perceptively identified O’Donoghue’s ability to displace ‘our more predictable reactions to things so that we glimpse their underlying tragedy’. The cultural traditions, history and countryside of his native North Cork certainly inform his work, though in a 2006 interview O’Donoghue remarked that he was ‘rather against confessional poetry’. He did, however, admit that ‘I think I do thrive on displacement’ (that is, from Ireland to England). He modestly described his poems as ‘mostly small-scale moral stories’, remarking that they are often ‘working against a short story as a form more natural to them’. By his own account, he began writing poetry in 1979, after the death of his mother, and the birth of his first child, in that year. Such human occasions, the centrality of love and its necessary opposite, death, have remained consistent themes. O”Donoghue summarized an early collection, The Weakness (1991), as being about the ‘fragility’ of life. He added that his sensibility was ‘a bit melancholy’.

Gunpowder (1995) won that year’s Whitbread Poetry Award, and O’Donoghue was praised in the Times Literary Supplement as ‘a poet who has reinvented himself as a wise celebrant of uncertainty’. This is variously true of poems such as ‘Coronach’, when a man is found dead under a bridge, and ‘Ceo Draiochta’ in which a farm worker is stoic after losing a leg in a harvesting machine. O’Donoghue’s rural childhood in North Cork provides many of the settings. There are glimpses of farm labourers at work, driving the cow or ‘Killing the Pig’: ‘He drank his tea and took the time to blow up / The bladder into a light, ludicrous football’. The title poem is an elegy for his father, who is summoned back through personal items like a jacket: ‘The sleeves smelt of gunpowder, evoking… / Celebration- excitement – things like that’. In a nice conflation of the instruments of shooting and writing, his used gun cartridges are seen as ‘Upright on their graven golden ends, / Supporting his fountain pen’. Another significant title, ‘The Great Famine’, turns out to be an oblique comment on the nation through its tale of a farmer in Skibbereen telling tourists stories about the great tragedy, concluding that ‘he hungers most for the seasoning / That salts with glamour the old taste of failure’. Characteristically, as in ‘Metamorphosis’, nature persists amid human mortality and in ‘Grief Suspended’, grief ‘hang[s] in our air / Like worms of setting toffee’.

Here nor There again summons up some of the personal backgrounds of his youth, but suggests that Ireland itself is a more equivocal place. The speaker of the opening poem ‘Nechtan’ says he is ‘homesick for Ireland’ yet unable to land there, ‘fated / To sail for ever in the middle seas, outcast / Alike from the one shore and the other’. And in ‘Westering Home’, during a drive through Wales ‘Things start to feel like Ireland’, yet become less and less clear. The narrator can identify ‘the old thin ache you though that you’d forgotten’ but finds ‘Less tears than rain. And the whole business / Neither here nor there, and therefore home’. The elegiac mode becomes dominant, mourning specific friends as well as a young priest in West Cork (‘The Definition of Love’), a milkman (‘Pied Piper’) and a local gravedigger in ‘Hermes’. ‘Ter Conatus’, which concludes the book, is a wonderfully unsentimental piece about the passing away of rural lives and places, in its story about an elderly brother and sister: ‘nearly sixty years / They’d farmed together, never touching once’.

Reviewing Outliving (2003) in the Times Literary Supplement, Sean O’Brien admired ‘the tact’ that O’Donoghue exercises, his poetry being ‘so full of death and elegy’ yet also ‘humility’ in the face of the facts of human decay and loss, ‘as well as of a complete rural world’. In ‘Kerry v. Cavan 1955’, a childhood sporting memory is counter-pointed by the present, in which a favourite Uncle appears lost to Alzheimer’s. Similarly, in ‘Goalkeepers’, a seemingly anecdotal aside  about ‘Cork’s goalie’ turns elegiac as it remembers the brother (‘I got to know / in Oxford a generation later’) who committed suicide. Yet O’Donoghue is also celebratory of nature, his poems abounding in consolatory observations of landscapes and birds. ‘No More Bother to Him’, another elegy, sees the red kites ‘caught by the spring sun as they swing high / Over Nuneham Courtenay’ [near Oxford]. O’Donoghue’s growing stature as a poet is recognized by his Selected Poems (2008) having just been published by Faber and Faber. The emotional honesty of his work, its wry observances and heartfelt elegizing of people and places, make it a source of bittersweet pleasures. Rooted in his Irishness, O’Donoghue offers a truly humane vision of lives and memories, which uneasily crosses national boundaries.

I grew up in rural North Cork, in a place famous for traditional music and for poetry in Irish from the seventeenth and eighteenth centuries. These things led to deep-rooted interests in linguistic things, and especially literature, both written and oral. I went to school in Manchester (my mother's place of origin) when I was 16, and my obsessions from then on were Latin, English literature and music (including classical music at the Halle). I have lived in Oxford since 1965, and my main inspirations have been medieval literature: Chaucer and Dante and above all, the shorter poems in Old and Middle English. The Anglo-Saxon elegies are my model for the perfectly formed lyric poem.