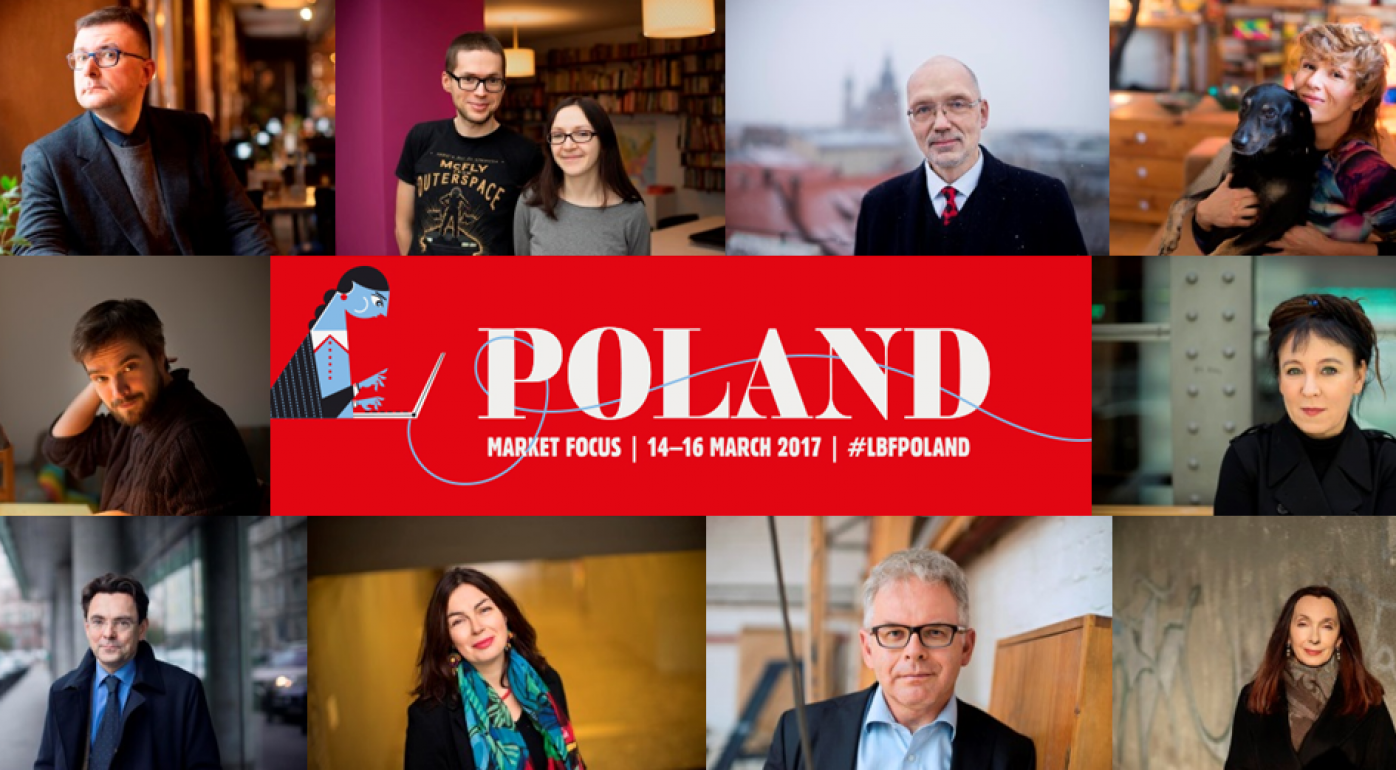 The British Council, in partnership with The Polish Book Institute, is delighted to announce the Poland Market Focus Cultural Programme for The London Book Fair 2017 taking place on 14-16 March. This year’s Cultural Programme involves twelve of Poland’s most prominent and exciting writers who represent the very best of Polish contemporary literature. The London Book Fair Cultural Programme will provide a valuable opportunity for UK audiences and publishers to meet and interact with Polish writers, who will in turn be able to engage with their UK counterparts in front of an international literary audience.

The participating writers represent the diversity of contemporary Polish writing across a range of genres and formats and will explore themes including ‘imagining the future’, ‘reportage: a Polish specialism’ Polish crime fiction and poetry in translation. The delegation includes:

• Olga Tokarczuk: one of the most critically acclaimed and commercially successful Polish writers of her generation. She is a writer of fiction and essayist on Jung.

• Crime writer and novelist Zygmunt Miłoszewski, who also writes fantasy for young readers. He was previously a journalist and editor for the Polish edition of Newsweek, and his books have been translated into a number of languages, including English, French and German.

• Internationally recognised graphic artists and authors Aleksandra Mizielińska and Daniel Mizieliński. They are the authors of Maps, published by Big Picture Press in the UK.

The Cultural Programme includes a range of talks, seminars and discussions which will take place during the Book Fair at London Olympia, as well as public events in London and around the UK during the week of London Book Fair (14-16 March 2017). The public will be able to meet Polish writers and listen to discussions at venues including the British Library, the Southbank Centre’s Poetry Library and Waterstone’s Gower Street.

The British Council is also delighted to be supporting the Polish government’s 2017 Joseph Conrad year. In 2017, Joseph Conrad Korzeniowski returns in grand style. The most British of Polish writers and the most Polish of British writers will be appearing in the media, exhibition halls, on stage, and in the public space in the coming months across Europe. The Polish Parliament has declared 2017 a Conrad Year, a way of commemorating the 160th anniversary of the birth of the writer of such novels and novellas as Heart of Darkness, Lord Jim, The Shadow Line and The Secret Agent. The anniversary of the author’s birth falls on 3 December.

The British Council, now in its tenth year as strategic partner of The London Book Fair, has worked in wide consultation with its official partners, industry professionals, and experts in the field to curate and develop a cultural programme which demonstrates the excellence, depth and breadth of the contemporary Polish literary scene.

Cortina Butler, Director Literature, British Council said: “The UK and Poland have close historic ties and there is a large and vibrant Polish community in the UK. We anticipate that the Polish Market Focus Cultural Programme will do much to strengthen these relationships - as well as having a lasting impact on appreciation in this country of the strength and depth of contemporary Polish literature. We are delighted to be working with The London Book Fair and the Polish Book Institute on this programme and believe that it creates a unique opportunity for the writing, publishing and reading communities in the UK and Poland to build understanding and make connections and for the people of the UK to find out more about the literary heritage of our Polish neighbours.”

Jacks Thomas, Director of The London Book Fair said: “In the U.K., Polish is the most widely spoken language second only to English. Our countries share a unique bond and an interwoven history, yet despite this, our collective knowledge and understanding of Poland, not to mention its culture, literary scene, and writers, remains surprisingly limited. Through this 11th LBF Market Focus programme, we aim to build long-lasting and meaningful relationships and introduce a variety of audiences to a broad cross section of Polish literature. We look forward to working closely with our partners at the British Council and the Polish Book Institute, to showcase this Cultural Programme both to the London Book Fair's participants from around the globe, as well as the audiences closer to home in the U.K.”

Dariusz Jaworski, Director of the Polish Book Institute said: “The list of authors who will be representing our country during the London Book Fair has been established taking into consideration potential interest of the British public in the author’s oeuvre, that is existing or in upcoming translations. Our main goal is to show the diversity of trends and the dynamic of the literary life in Poland. We are presenting philosophical and historic essays, crime fiction, novels, poetry, reportage and literature for children. We offer to the British what we value the most.”