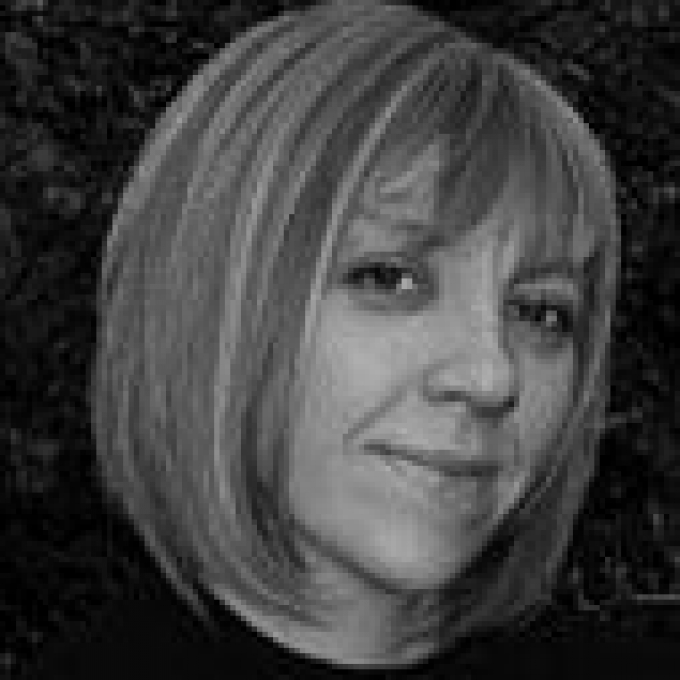 Zoë Skoulding was born in 1967 and has lived in north Wales since 1991, having previously grown up mainly in Suffolk, worked in Belgium, read English at Exeter University and taught in India.

She has taught literature and writing for several years, initially in secondary schools and more recently at Bangor University in the School of Lifelong Learning, where she co-ordinates part-time undergraduate and postgraduate courses. Having completed her Ph.D. in Creative and Critical Writing in 2005, she was awarded an Academi (Arts Council of Wales) bursary. She currently holds an Arts and Humanities Research Council Fellowship (2007-2012) in Bangor's School of English, where she is researching poetry, gender and city space.

As well as writing three collections of poetry, she has been involved in several projects combining performed poetry or lyrics with music, soundscape and film. Parking Non-Stop has been the most extended of these collaborations. As well as the more musical aspects represented on the 2008 album Species Corridor (Klangbad), it has included performances of poetry in translation juxtaposed with field recordings as a means of exploring both acoustic and linguistic relationships between places. Her poetry has been translated into Bosnian, Bulgarian,

She is a regular contributor to literary journals and in 1994 launched the poetry magazine and pamphlet series, Skald, of which she remains a co-editor. She became editor of the international quarterly Poetry Wales in 2008.

‘There were days when cold / was so intense that words would freeze / in solid particles mid-air’ states the narrator of ‘In Certain Cities’, the opening poem of Zoë Skoulding’s first full collection, The Mirror Trade (2004).

A magic realist narrative that employs provocative imagery in order to communicative subtle socio-political observations (the fraught histories of cities such as Warsaw, Berlin and Moscow linger in the poem’s background), its ‘frozen phrase[s]’ are also a linguistic exploration of language’s – and in particular, poetry’s – potential, as well as an apt enough representation of Skoulding’s poetic style itself: taut, image-rich, often elliptical lines that demand close reading, but are equally inviting in their tone and colloquial diction. In fact, in her combination of formal writing with more open-ended experimental pursuits, Skoulding’s poetry bears comparison to the work of Penelope Shuttle: a multifaceted, shifting style that is nonetheless rooted in the landscape of Skoulding’s adopted North Wales, just as Shuttle’s poetry bears frequent traces of her home county of Cornwall. Where subject matter is concerned, however, the cityscapes, urban dystopias and fascination with place that characterise poems such as ‘Sous les Pavés, La Plage’ and ‘The Bridge: Berlin, 2000’ are closer to Lavinia Greenlaw’s work (particularly her explorative collection, Minsk); Skoulding often pursuing similar lines of enquiry in order to wrestle meaning from the places that shape our lives. In the urban bustle of ‘Taxi Driver, Delhi’, for instance, the cabbie becomes a mixed symbol of reassurance and wavering faith in the contemporary, viewed as a man oddly at peace with the chaos that surrounds him:

laced with diesel, jasmine, sewage, incense;
how, when the owner of a towering four-by-four
shakes his fist and shouts

Perhaps unsurprisingly in such a peripatetic collection, a fascination with absence also pervades The Mirror Trade. This spans from the stuttered mobile phone conversation of ‘Pause’ to the deceptive visuals of ‘Binocular’ (‘space // reeled in and out of focus; sky wobbled / uncertainly, or it might have been water’), finding its highlight in the collection’s title poem: a short, provocative exploration of the Venetian glass-making industry. Set on the island of Murano, where the secrets of Venetian glass were once held, the poem peers into the fragile constructs of personal, communal and geographical identity, the first person plural drawing the reader into the poem’s measured unfolding of events:

'It’s death to leave the island with this knowledge.
As we load mirrors, ships
bleed pictures of more ships
which lap the warehouse steps; we send out
pieces of ourselves which bear no trace of us.'

Skoulding’s second collection, Remains of a Future City, appeared in 2008. Focusing on what the blurb calls ‘a textual city of monuments, castles, bridges and labyrinths’, a fictional metropolis that is simultaneously nowhere and everywhere, the book’s intensely visual poems explore a fractured, unstable world of demolition and development, back alleys and unusual, uncharted districts; from ‘the trees, […] the wooden houses, bricks and broken concrete’ of ‘Building Site’, to the ‘traffic churn / intestinal pressure / and slightly irregular heartbeat / setting off dreams’ in ‘The Sinister Quarter’. Such future ruin – be it that which bears the seeds of disaster or is ruined before its creation, as in the physics-defying ‘split second of balance’ of ‘The Building Constructed from Its Own Fall’ – most obviously recalls Shelley’s famous sonnet ‘Ozymandias’, in turn echoed in the collection’s opening poem, ‘You Will Live in Your Own Cathedral’, where ‘the cathedral of glass is misted over by the scratch of voices wearing it to sand.’ In fact, like ‘Ozymandias’, Remains of a Future City’s central concern lies within the inherently unstable and shifting semantics of language, but also the disturbing fact that the physical world around us – particularly that which we have created – is all too similar; when ‘a wall [becomes] a sentence / crumbling into air’ (‘Underpass’), and ‘the books have melted into one another / and the titles have faded away’ (‘Library’).

The drawback to such a sustained thematic focus, however, is that the poems run the risk of becoming tiresome and repetitive. Fortunately, Skoulding’s stylistic diversity generally serves to counter this: the supple language of her poems owing much to the various work she has done with fellow poets and musicians. This includes the collaborative poems of pamphlet Dark Wires (2007), composed with Ian Davidson, as well as the psychogeographical explorations of performance poetry and found sound collective Parking Non-Stop, which Skoulding utilises to push the linguistic and rhythmic effects of her poems to their fullest potential, as in the eerie and provocative recording of ‘Building Site’ (http://poetryfoundation.org/harriet/building_site-1.mp3). The sequence ‘Columns’ from Remains of a Future City – a sort of companion piece to the poems collected as ‘Through Trees’ in The Mirror Trade – also reveals Skoulding’s interest in poetic graphology and so-called ‘concrete’ poetry: the poems as much literal pillars of narrow, justified text as they are seeming newspaper clippings from an uncertain, nightmarish future; where ‘between two points on the / earth’s surface a meaning / is dislodged’. In fact, the last poem of the collection, ‘Conversation with a Dutch Poem in Berlin’, suggests a possible new direction for Skoulding’s work: responding to the poetry of European poets, or perhaps even translation. Whichever course Skoulding’s poetry takes, though, her work to date undoubtedly reveals the early development of a curious, robust and often demanding poetic sensibility; ‘reach[ing] for that spring’, as Skoulding describes the town of Medzilaborce, Slovakia in ‘Voda’, ‘from which / the muddy floods of song might burst.’