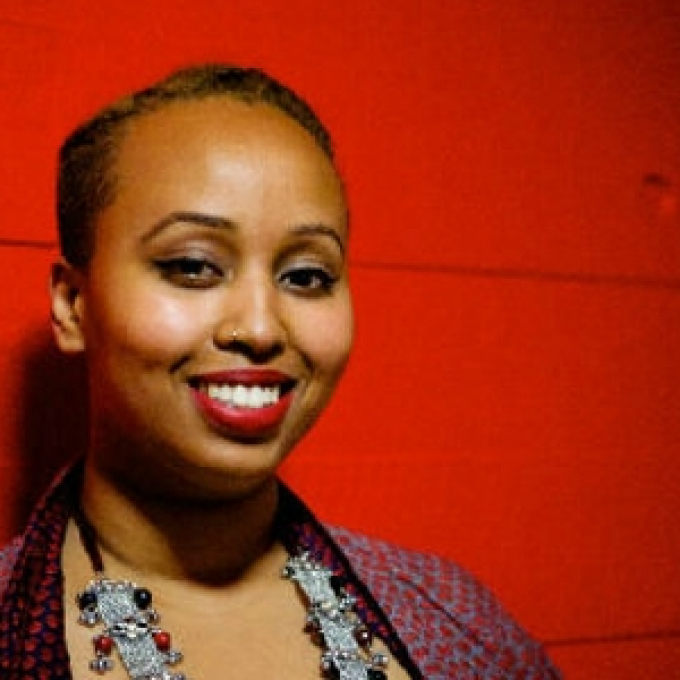 Warsan Shire was born in Kenya in 1988 and is a London-based Somali-British writer. She is the author of the collections Teaching My Mother How to Give Birth (flipped eye, 2011), Her Blue Body (flipped eye, 2015), and Our Men Do Not Belong to Us (Slapering Hol Press and Poetry Foundation, 2015). Her work has appeared in a range of journals and anthologies, including Poetry Review, Wasafiri, Sable LitMag; the Salt Book of Younger Poets (2011), Long Journeys: African Migrants on the Road (2013), and Poems That Make Grown Women Cry (2016). Shire’s poetry was adapted for singer Beyoncé’s album Lemonade in 2016.

Shire is the poetry editor of Spook Magazine and has guest edited Young Sable LitMag. She has performed her work internationally at events in South Africa, Italy, Germany, and the United States. In 2013, she won Brunel University’s first African Poetry Prize. In 2014, she was named the first Young Poet Laureate for London and chosen as poet-in-residence for Queensland, Australia. Fellow poet, Bernardine Evaristo has said of Shire’s poetry that ‘it is entirely her own voice — unflinching and sometimes shocking, yet also exquisitely beautiful, stunningly imaginative, imagistic, memorable — always deeply felt and eminently rereadable. Here is a poet who explores how the victims of civil war can end up as refugees in the sometimes hostile host communities of Europe; people who have lost everything — family, nation, home’.

Warsan Shire translates her surname as ‘to gather in one place’. Ironically, such homely associations of belonging, congregation and refuge are typically strangers within Shire’s poetry, which is more often concerned with unhomely realities. Shire’s protagonists are typically migrants, sex workers and refugees, and her writing turns upon tropes of dislocation, loss and disorientation.

Much of Shire’s poetry to date is written on the body. In Her Blue Body (2015), flesh is associated with forms of literal and figurative death, mutilation, or dismemberment: cancer, cliterodectomy, and lost virginity are among its themes. The collection begins within the womb, as cells divide and reproduce, or are found variously benign and cancerous. The speaker occupies a future space, from which she looks back on the dead and the undying. This work typically progresses through backward and forward movements in time, or circles around origins, navals and moments of inception.

The female body takes on the scale and significance of a landscape in these poems. In ‘Mermaids’, Shire captures the contradictions of female genital mutilation:

'After the procedure, the girl learns

how to walk again, mermaid with new legs,

In ‘First Time’, the poet shifts from surgery to sex and another act of incision that tears innocence in two: ‘you slipped inside/ her like a coin/  broke the pink sugar paper/ like a magician/ sawed her in half’.

In ‘For women who are difficult to love’, a poem famously adapted for Beyonce’s 'Lemonade' album, Shire seems to challenge traditional wisdom which identifies the female body as a site of accommodation: ‘you can’t make homes out of human beings’, she says. In ‘The House’, the body appears as a series of locked rooms refusing entry or waiting to be opened. The body figures as a site of return, self-discovery and alienation. By turns a space of intimacy and a war zone or battleground, the women’s bodies in these poems occupy the border between the personal and political, public and private. ‘The House’ describes how ‘At parties I point to my body and say This is where love comes to die. Welcome, come in,/ make yourself at home. Everyone laughs, they think I’m joking.’

In ‘Home’, Shire captures the subject of her poem as a hole or an opening (a mouth; a barrel) that is overdetermined by associations of violence, rape, fear, entrapment, death:

but home is the mouth of a shark

home is the barrel of the gun'

Finally, in a poetic sequence called ‘Conversations About Home’– which is set, paradoxically, in a deportation centre- Shire begins on a note of visceral expulsion (‘home spat me out’) before closing with the following discomforting image of ingestion: ‘I tore up and ate my own passport in a hotel room. I’m bloated with language I can’t afford to forget’.

‘Backwards’ is a particularly striking piece in this collection. It is a poem on rewind, where age, actions and narration are subject to erasure and rewriting, or grave to cradle movements that clear the space for love. It’s a poem that places special faith in poetry’s capacity to undo or to suture, albeit temporarily, the direct and indirect violence explored elsewhere in Shire’s work: ‘Mum’s body rolls back up the stairs, the bone pops back into place’.

Despite Shire’s insistent concern with themes of unbelonging, gender inequality and migration, she has also stressed that: ‘I don’t want to write victims, or martyrs, or vacuous stereotypes’. The epigraph to her collection Teaching My Mother How to Give Birth (2011) captures a tension between combination and dispersal; an idea of genealogical belonging undercut by memories of loss and departure: ‘I have my mother’s mouth and my father’s eyes; on my face they are still/together.’ Enjambment both separates and connects the last two words of this passage, capturing togetherness, even as it falls apart.

Shire says of Teaching my Mother How to Give Birth: ‘It’s about women, love, loneliness and war, in chronological order. Poems that focus on adolescence and young adult hood, married life, divorce, motherhood, growing old and death.’ At the same time, this pamphlet picks away at the temporal divisions between innocence and experience. A mother’s first kiss is combined with violent images of rape (‘Your Mother’s First Kiss’), while in ‘Things We Had Lost in the Summer’, a 12 year old awaits the onset of puberty, willing the arrival of a sexualised body that is already there:

'I finger the hole in my shorts,

in the car my mother stares at me through the

rear view mirror, the leather sticks to the back of my

thighs. I open my legs like a well-oiled door’

Warsan Shire’s work to date is perhaps shaped most profoundly by growing up in war torn Somalia, a traumatic setting that is both external to, and inside her writing, on her mind and her body. ‘I grew up with a lot of horror in the backdrop– a lot of terrible things that have happened to people who are really close to me, and to my country, and to my parents; so it’s in the home and it’s even in you, it’s on your skin and it’s in your memories and your childhood.’

What makes Shire’s work to date so striking and so unsettling, is its capacity to turn terror into poetry.