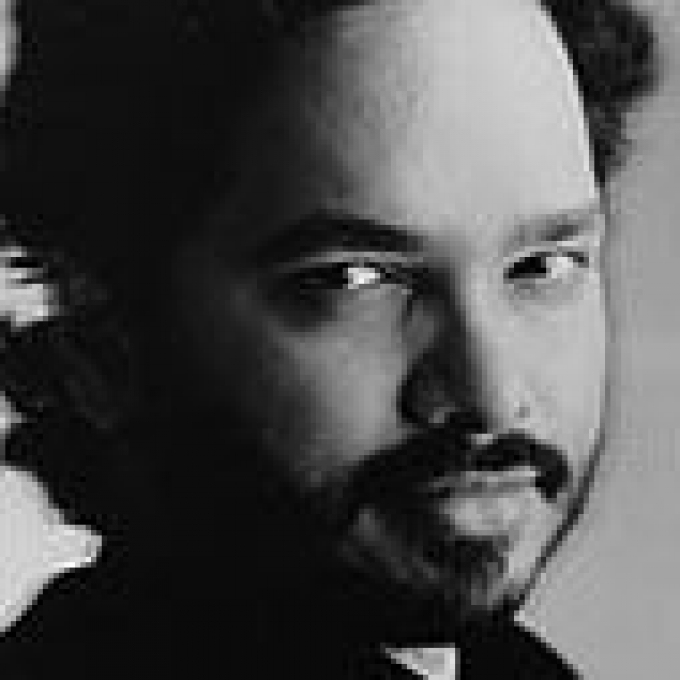 Vikram Chandra was born in 1961 in New Delhi.

He co-wrote an Indian Feature Film, Mission Kashmir, released in 2000, and currently teaches Creative Writing at the University of California. His most recent novel is Sacred Games (2006), set in present day Mumbai.

A non-fiction work about the culture of computer programming and classical Indian aesthetics was published in 2013 by Penguin India as Mirrored Mind: My Life in Letters and Code; and in 2014 by Faber & Faber as Geek Sublime: Writing Fiction, Coding Software.  The book was published in the US as Geek Sublime: The Code of Beauty, the Beauty of Code by Graywolf Press in September 2014. (http://www.vikramchandra.com/biography/)

Vikram Chandra’s fiction constantly calls attention to the power of a multilayered storytelling to give shape to the multiplicity and the variety of the world we live in. These narratives combine timeless topics such as love, death and redemption with a concern for more specific social and political meditations on the crushing power of imperialism, on class and ethnic conflicts and on the illegal dealings of the urban underworld.

To Chandra, there is no such thing as a single story. ‘All stories’, Chandra’s first novel Red Earth and Pouring Rain (1995) reads, ‘have in them the seeds of other stories. Any story, if continued long enough, becomes other stories’. In an interview with Ranjan Ghosh, Chandra, quoting from one of the narrators in Red Earth and Pouring Rain, claims that the writer ceases to be the owner of the story the minute it gets written: ‘In his or her encounter with your story, the reader constructs a new story. Each reader’s narrative is a unique one, related to the one you constructed but not quite the same’. Thus Chandra constantly challenges the notion that there can be authentic ways to represent the cultural, social and historical realities as well as the personal and collective past from which all narratives emerge. This challenge against authenticity has opposed the author to Indian academics such as Meenakshi Mukherjee, who have accused Chandra of treating India and Indianness as commodities to sell his books in the West. Chandra’s cogent rejoinder appears in his essay ‘The Cult of Authenticity’ (2000), where the author claims that some Indian academics prefer to judge books not on their relative merits, ‘but on the perceived Indianness of the author, and, by implication, the degree of their assimilation by the West’.

Both Chandra’s two novels, Red Earth and Pouring Rain and Sacred Games (2006) as well as his collection of short-stories Love and Longing in Bombay (1997) self-reflexively signal the artificiality of the act of storytelling and the complex stratification of their narratives. The texts use frames and inserted narratives that disrupt the linear development of the main narration. The two narrators of the epic Red Earth, a novel that takes the reader across several centuries and continents, are the 19th-century poet and revolutionary Sanjay and the present-day student Abhay who has just returned to India after attending college in the United States. Both of them first conceive their narratives just for a limited family circle which then retells them to a wider audience gathered in the Maidan. In Love and Longing, a collection that includes short-stories belonging to different genres (the ghost story, the thriller, the tale of romantic love) whose conventions they subvert, the storyteller Subramaniam tells his stories to the regulars of the Fishermen’s Rest. They are then transmitted to more people by one of Subramaniam’s listeners, the narrator Ranjit Sharma. Sacred Games, which Chandra has defined as an ‘anti-thriller’, makes frequent use of Inset Chapters. These do not directly involve the two protagonists, the detective Sartaj and the gangster Ganesh Gaitonde, but provide context to their lives and to the events they go through. The author justifies the presence of these insets as setting up ‘a layer of stories that help us understand more about ourselves’ and comparing them to ‘the subterranean notes in a symphony, which you can hear in the background’.

Chandra’s fiction constantly challenges the idea of a unified and rationalist narrative. In Red Earth, inspired by the translated memoirs of Anglo-Indian soldier and British Raj founder James ‘Sikander’ Skinner, a printer gives Sanjay a copy of Aristotle’s Poetics, advising him that the book is the origin of all good literature. The printer points out that the treaty applies scientific principles to art and literature, thus keeping ‘imagination under the natural light of logic’. Red Earth invites the reader to see the same ideology espoused by the printer behind the oppressive political discourses of colonialism and imperialism. Through the figures of Aristotle’s pupil Alexander the Great, whose colonialist policies mirror those later adopted by the British, and Jack the Ripper, whose anatomical dissections reflect the Victorian quest for scientific taxonomies, the novel targets all the philosophical positions that impose homogeneity over diversity. Contrary to this wish that ‘there should be only one idea, one voice, one thing, one, one, one’, at the end of the novel, Abhay compares the story that he is about to tell to a ‘lotus vine that will twist in on itself and expand ceaselessly’ and whose characters include a wide-ranging cast taken from all social walks of life.

This stance against a single and unifying form can also be detected in Chandra’s subversions of his readers’ generic expectations in Love and Longing and in Sacred Games. As the author makes clear in an interview with Kevin Mahoney, Love and Longing plays with the form of the short-story and includes stories belonging to different genres. Chandra hopes that ‘each of the stories works as an affectionate caressing of the contours of the received form’. Yet he equally hopes that ‘none of them offer the expected and comforting solutions that have become the conventions of the respective genres’. The stories systematically defy generic conventions. At the end of ‘Kama’, the thriller which introduces the Sikh detective Sartaj, for example, its protagonist fails to reconstruct a coherent picture from the clues that he has assembled and feels instead the vastness and multiplicity of Bombay: ‘he could feel the size of the city, its millions upon millions, its huge life and all its unsolved dead. . . . Sartaj knew that nothing was finished’. The same frustration of readers’ expectations and generic conventions continues in Sacred Games which features again Sartaj as one of its two protagonists. To Chandra, detective fiction belongs to the age of reason and the final solution of the crime restores the balance that has been upset at the beginning. Yet, in Sacred Games, the author ‘overturn[s] that template’. He traps the characters in so many ‘layers of history and events’ that they eventually have no idea of the larger picture and are ‘caught up in ... a huge web of agendas and politics and ideologies’.

This constant stress on multiplicity and diversity, the use of meta-fictional devices and the rejection of a unified narrative have led critics to read Chandra’s books as postmodern and postcolonial. Not surprisingly Chandra is suspicious of univocal interpretations resting on a unique theoretical frame. He finds that even anti-hegemonic discourses such as postmodernism and postcolonialism tend to become limiting and totalizing. The same features that critics find postmodern, Chandra claims, can also be found in traditional Indian storytelling. Dora Sales Salvador has taken up the author’s suggestion and has provided an interpretation of Red Earth and Pouring Rain in between postmodernism and the poetics of Indian aesthetics. Her thought-provoking reading shows how the novel’s spiralling narrative is linked to ancient traditional Indian literary forms accounting for ‘the flux of the traditional Indian epics, the Mahabharata and the Ramayana’. Embracing a simultaneous wealth of narratives, storytellers and generic conventions, Chandra’s fiction is a powerful illustration of how different cultures are indissolubly bound together in our contemporary world.