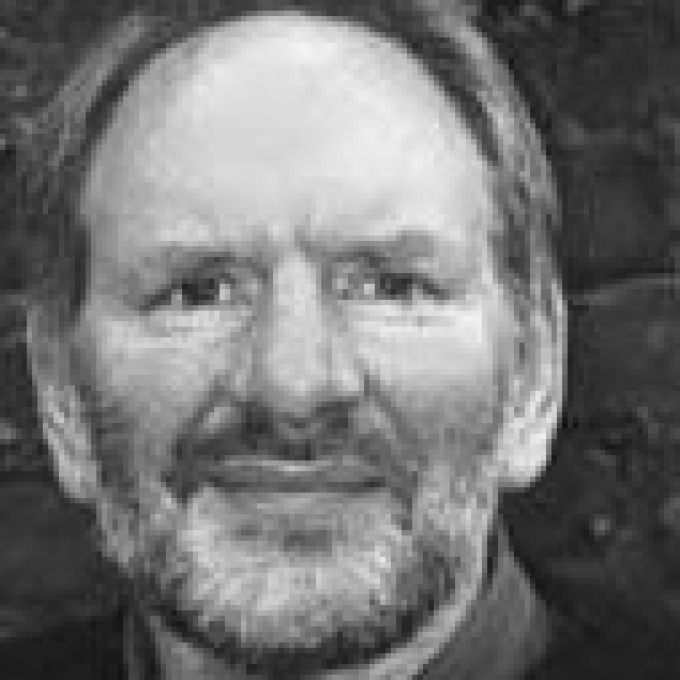 After studies at the University of St Andrews, he taught English in a number of capacities in schools in Edinburgh, London and Madrid, before taking up a post at Dumfries Academy. He has taught Creative Writing and Storytelling for some years and is currently Honorary Senior Research Fellow at Glasgow University at Dumfries, and a lecturer at Lancaster University. With artist Hugh Bryden, he also runs the art book press, Cacafuego Press.

Primarily a poet, he is the author of five ollections of poetry. Landscapes and Legacies, published in 2003, was shortlisted for the Scottish Book of the Year Award. He has also written radio plays, a travel book about Peru, In the Palace of Serpents (1992), and books for children, including Callum's Big Day (2000) and Who is the World For? (2000), illustrated by Robert Ingpen, which won the Scottish Arts Council Children's Book of the Year Award in 2001. Captives (2006) is a book for young adults set on a fictitious Caribbean island.

He has held various writing posts, including that of Scottish/Canadian Writing Fellow, based in the University of Alberta in Edmonton, and Virtual Writer in Residence for the Scottish Library Association's Scottish Writer's Project.  He was the first ever Writer in Residence at the Edinburgh International Book Festival from 2001-2003, and Poet in Residence at StAnza 2005, St. Andrew's Poetry Festival.

His latest book, In The Becoming: New and Selected Poems (2009), is a collection drawn from previous volumes together with recent unpublished poems.

Tom Pow has written radio plays and a travel memoir, and over the past decade he has become a prolific children’s writer, but it is principally for his longer career as a poet that he is recognised.

Much of Pow’s poetry encourages the reader to find pleasure in the commonplace. This has been a prominent feature of his work since ‘Invitation’, from his first collection Rough Seas (1987), a poem also placed at the start of the recent collection In The Becoming: New and Selected Poems (2009):

Here, the poet implores us (the imperatives suggest something slightly firmer than an invitation) to develop for ourselves a way of seeing akin to that of a child as we look at the toddler, and implies that by doing so we might stand to learn something, as adults, about the human condition.

Such urges, and reminders, are something of a leitmotif of Pow’s oeuvre, and reach a challenging apotheosis in the almost-title poem of Pow’s first collection, ‘Rough Seas: Three Postcards’:

‘Once, as children, didn’t we thrill to anything,

racing the gentle tide? Now we only

like the sun to touch us; though rough seas call

us to their edge, drench us with simplicity.’

The use of the collective pronoun here might lead us to conclude that, in spite of all of his pronouncements and posturing (‘I feel more the pull of rough seas’), the fog of maturity has even blinded the poet to the multifarious wonders of the world around him. But the poems tell a different story.

However, despite obvious temptations, there is nothing cutesy or mawkish about Pow’s way of seeing things. The first time I read ‘Love at the (Bronx) Zoo’ (Rough Seas) I happened to be in a vehicle that was crunching through one of the many less than salubrious areas of that New York City borough. Twenty or more years after Pow wrote the poem, it seemed to sum up a foreigner’s experience of the journey with uncanny accuracy:

to reclaim the rim of the highway

a brazier licking the chill

to a stop in front of us. Rusted panels

from corroded fins. We sit tight

into the winter air. We turn to each other …’

A foreigner’s sense of shock and surprise is not always that different from a child’s, after all – but the foreboding in this poem is the result of adult experiences and prejudices. To find this sense of wonder and the unheimlich commingled with such honesty about our human prejudices, fears and needs is rare. We should remember the poem’s title, and note that the speaker is still travelling through what seems a sort of grotesque, human, inverted ‘zoo’ even when he leaves the establishment itself.

It would be wrong to call Pow a poet of childhood, exactly, or a poet of nature, or of Scotland. He is all of these things, but attaching labels would serve to unfairly pigeonhole a versatile and exciting poet. Nonetheless, the wilds of Scotland feature prominently in his work, and it is plain to see where his heart resides. ‘Crabs: Tiree’ (Landscapes and Legacies, 2003) tells the story of a day spent fishing for crabs during a childhood holiday in the Hebrides. The experience is as one might expect until a child from the big city pushes him into the sea, so that he is ‘waist deep in crab- / infested waters’. Nonetheless, one thing he remembers in adulthood (and so must have also noticed as a child) is

it was all around me! The spatter

the cottontail, the buttercup

on the cropped foreshore. The sky

was depthless; all was silence.

And I was there

bearing terror in one hand, guilt

in the other, leaving the briefest wake

to mark my shame.’

This is sumptuous writing, evoking both a Hebridean seascape in high summer and the bewilderment of a child faced with a minor, memorable crisis, with clarity and simplicity. However, the references sound very much like those of an adult, not those of a child: the poem could not exist had the experiences of the child not been remembered acutely and filtered through the mind and pen of an adult. But such poems of Pow’s are to be enjoyed, not worked over, and the best of them have a spellbinding, mesmeric quality that really seems to sum up how things are, or can be, or were.

Philip Larkin regarded childhood as a ‘forgotten boredom’, of course, and was in many ways a very different poet from Tom Pow; but he shared Pow’s interest in the commonplace and appeal to the senses – and to common sense. Pow also shares with Larkin an occasional habit of alluding to other poets' poems in his own, though in such a way that his poems tend to remain readily available (though something may inevitably be lost) to those who fail to spot the allusions. One poem is knowingly titled ‘Prelude’ (Dear Alice: Narratives of Madness, 2008), and another ‘The Card Players’. The latter shares its title with a sonnet from Larkin’s 1974 collection High Windows, ‘celebrating’ the unsavoury behaviour of some card-playing characters in a Flemish screen painting, who variously huddle drunkenly round a lamp with hands of cards, ‘gob at the grate’ and ‘piss’ into the dark as the stars glare through the windows. Pow’s poem commemorates its own card-playing gathering, that of his own family, and he puts himself at the heart of it:

‘After the luxury of advocaat, lapped

from one-shot glasses held like nuggetsin our fists, we cluster round the orange lightof the paraffin lamp as the cards are dealt.

For a few nights after my aunt and unclehave left, we’ll play on: Sweaty Betty mostly.'

Between hands, he slinks off to ‘piss on the grass’, a child in unconscious parody of the famous Larkin poem, catching a glimpse as he returns of ‘the card players past the thin / print curtains’ – an image that will remind him of something else, with all of its comic and awful but also homely connotations, these years later. This poem (not unlike several of the others mentioned here) demonstrates Pow’s proclivity for exploring complex emotional responses with directness and simplicity. This tendency reaches something of a peak in Dear Alice: Narratives of Madness, a collection inspired by Pow’s work as a university lecturer in a building that had formerly been a lunatic asylum in Dumfries, in which ‘Others / recoil, wondering in spite of it all, when / and just where they will ever fit in’ (‘Questions of Judgement’).

Poetry has been, since the age of eighteen, how I explore what it means for me to be alive. It is my way of being in the world. However, if poetry has given me my most intense experience of language, I have also enjoyed the different challenges of a range of other genres - from picture books to art books.

@LitBritish Make sure to listen in on 1 October: https://t.co/FvxuTNUpPS
(2 days ago)

@LitBritish RT @DeanAtta: The National Centre for Writing (@WritersCentre) has produced this excellent list of literature organisations (so many of the…
(3 days ago)

@LitBritish Congratulations to David McKee on the @Booktrust #LifetimeAchievementAward. What's your favourite character of his?… https://t.co/uzMR4K2RmL
(3 days ago)