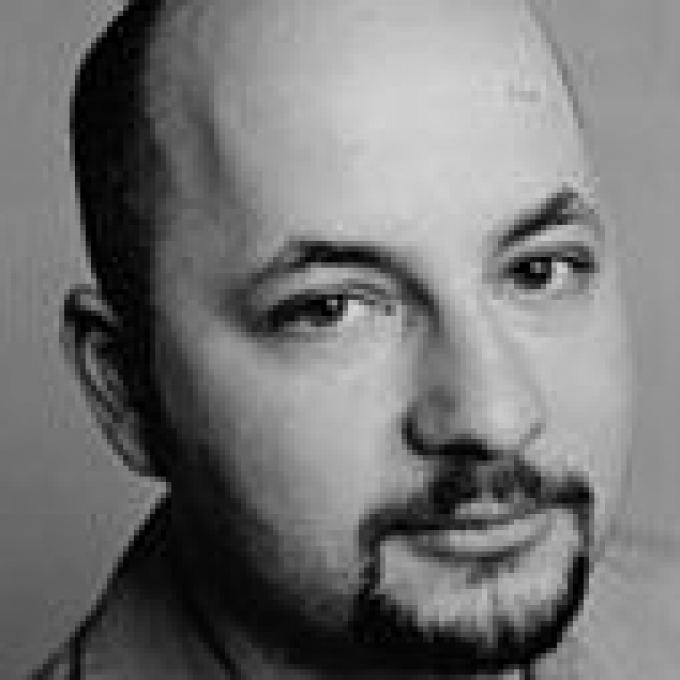 Toby Litt was born in Bedfordshire, England, in 1968.

He read English at Worcester College, Oxford, and studied Creative Writing at the University of East Anglia where he was taught by Malcolm Bradbury, winning the 1995 Curtis Brown Fellowship. He lived in Prague from 1990 to 1993 and published his first book, a collection of short stories entitled Adventures in Capitalism, in 1996.

He is the author of the novels: Beatniks: An English Road Movie (1997), a modern On the Road transposed to middle-England; Corpsing (2000), a thriller set in London's Soho; and Deadkidsongs (2001), a dark tale of childhood. Exhibitionism (2002), is a collection of short stories that explore the boundaries of sex and sexuality. A short story by Toby Litt was included in the anthology All Hail the New Puritans (2000), edited by Matt Thorne and Nicholas Blincoe, and he has edited The Outcry (2001), Henry James's last completed novel, for Penguin in the UK.

Finding Myself (2003) is the story of what happens when budding author Victoria About gathers together ten friends for an all-expenses-paid holiday in Southwold in order to write up the ensuing events.

In 2003 Toby Litt was nominated by Granta magazine as one of 20 'Best of Young British Novelists'.  A new collection of short stories, I Play the Drums in a Band Called Okay, was published in 2008.

Toby Litt's latest novels are Journey into Space (2009), King Death (2010) and Life-Like (2014), which has been shortlisted for the Edge Hill Short Story Prize 2015 and longlisted for the Frank O'Connor International Short Story Award.

He lives in London and is a member of English PEN.

Toby Litt's second novel Corpsing (2000), his most successful to date, is a slick, snappy London thriller, dealing with the surprising consequences of an out-of-the-blue shooting in a trendy London restaurant. From its opening in fashionable Soho it's a very London book, urban and stylish, though Litt is only a Londoner by adoption.

He grew up in Ampthill in Bedfordshire, a town whose name echoes through the settings of his work - it metamorphoses into Amplewick (in the northern county of 'Midfordshire') in Deadkidsongs (2001), and appears as itself (Ampthill, Beds.) in Beatniks (1997); but Corpsing rings with the authenticity of a native Londoner, with the shrewd, urban voice of its snappiest, most metropolitan inhabitants.Conrad, the narrator of Corpsing, doesn't know what has hit him. His (recently) ex-girlfriend, Lily, is the only fatality of the restaurant shooting, and Conrad finds himself having to deal not only with the alarming fallout spiralling from the shooting itself but also with Lily's bereaved parents. The story which unfolds around him is (for him) overwhelming, but for the reader it makes for a narrative which is fast-paced and highly readable. Its pace and texture - in parts a compound of straight narrative exposition with newspaper articles, hospital reports, and so on - grip the reader's attention firmly throughout. This is, it should be said, a very hard book to put down. It is also an extraordinarily visual book, extraordinarily cinematic (if it isn't soon-to-be-a-major-motion-picture then it ought to be). The descriptions of the trajectory - as if in slow motion - of each of the gunman's bullets are particularly vivid and startlingly original.

As a rule Litt doesn't waste words on character development and such frivolities; Corpsing is quite bare but for plot development (hence in part the pace). So even though it has been considered overlong by some, and the ending is perhaps weaker than most of the rest of the book, overall it is, yes, slick and trendy and stylish and dynamic. And most of all of his novels it is funny too - not wild and hilariously funny, but written with real relish and pleasure.

Litt is largely known for this book, but to look around a little there's actually so much more than just this... Take, for example, his most recent novel, Deadkidsongs - from the German Kindertotenlieder - a stranger and more fragmented work. It is the story of Gang, a gang of four boys in the north ('Midfordshire') who spend their days preparing for a war, dreaming of fighting and of being war heroes. In fact they do end up in war of sorts - not the war they had been training for but one against the adult world - parents, teachers, social workers, etc. All adults, that is, except Andrew's dad, the Best Father. He is tough, military, he beats Andrew (and his wife), he applauds the boys' violence as 'courage' - and of course the boys all worship him. He is, to them, the only adult who understands what's really important - honour, strength, victory. The narrative switches between the points of view of the principle characters (though always in the third person), the styles of the different sections sometimes distinctive, sometimes indistinguishable. This causes a certain amount of confusion towards the end, as characters' identities are allowed to flow quite freely one to another, making it all a little baffling; and yet it is surprising how little this matters. Although some price is paid for this narrative disruption, the last chapters are nonetheless the most gripping, the most engaging - so even the most disorientated reader will feel compelled to keep reading regardless.

Deadkidsongs is a very chilling and sometimes shocking book; Litt is not afraid to show the boys' evil, their cruelty, and - worse still - their rationalisation of it. It is this that is most disturbing, the fact that these characters are not motivated by anger or other uncontrollable emotions, but justify their cruelty coolly in terms of ideas of justice and honour (only very rarely is anyone seen to be out-of-control or psychotic). And these are all things they have learnt from adults around them. Deadkidsongs is a bigger experiment, a bigger risk than the slick Corpsing; it might be less successful in many ways, less consistently fluent, but it's also a far bolder gesture.

Litt's first novel, Beatniks, is simpler, a cool, funny story of narrator Mary's attempts to be accepted into a gang of pure 1960s 'hipness'. Jack, Neil and Maggie who make up this gang try to keep things just as they were on July 29th, 1966, at the height of Beat, the year when (in their version of events) Bob Dylan was killed in a motorcycle accident. But it soon becomes clear that none of them is strong enough to maintain absolute purity, and they all have secrets from each other. Even Mary only really wants to join because she's attracted to Jack (who's in a relationship with Maggie; meanwhile Neil is attracted to Mary, who eventually - largely through lack of willpower - agrees to go out with him although she's still really attracted to his friend...). Beatniks is really a small studio piece; it has few active characters (only five who play any significant part in events at all); and it's only really Jack and Neil (and by extension Neil's cat Koko) who are given body and well explored, this thanks to our narrator Mary's attempts to analyse them). Like Deadkidsongs' Gang, it is thematically all about inclusiveness and exclusion; about people wanting to be in, and those who have the power to determine who is and who isn't.In some ways Beatniks has all the hallmarks of a typical first novel; set in the author's own home town, (parents' house, Ampthill, Beds.), with a main protagonist of about the author's age, it is a sort of fantasy escape story - though it is the escape from a particular kind of English lifestyle, and nothing more dramatic or malignant than that. But it is a bolder work than this description might suggest - for one thing the first-person narrator is female, a brave move for a first novel. Admittedly, the book's strength isn't particularly in Mary's voice or character (which are both fine), but in the plotting, the play between the other main characters - that's what makes it gripping read.

Exhibitionism (2002) is a collection of pieces of short fiction, many of which have Sex as a common theme (of which the best is probably the quirky On the etiquette of eye-contact during oral sex). One which doesn't quite fit in is nonetheless among the most original pieces in the collection; The Audioguide (formerly titled The Museum of Inside-Your-Head) purports to be the narrative text of an audio-guide to an empty museum; the guide, in other words, is all the exhibition there is. It's a slightly surreal piece, quite unlike anything else Litt has published, but a perfect balance between an odd humour and a sinister oddness, and the most compelling thing in the book. The rest of the book is patchier - good without being outstanding; it feels like a sort of flexing of Litt's writerly muscles, just for exercise, no more nor less than that. More than half of these pieces had published elsewhere first, so it doesn't quite cohere as a collection, but there are still many moments that are clever or funny or sinister. What distinguishes this from Litt at his best, however, is that here they are rarely all these things at the same time.There is also an earlier collection of short fiction, Adventures in Capitalism (1996).

Early on in Beatniks (1997), Toby Litt’s first novel, the narrator, Mary, tells us why she is drawn to a gang of three in her hometown of Bedford which is intent on adopting the look, mood, style and attitude of the Beat generation:

Something about that whole lifestyle suddenly appealed to me. I felt like being an adolescent again, even if only nostalgically, ironically, temporarily.

There we have Toby Litt’s project: the temporary, ironic and nostalgic adoption of style for the purpose of remaining at a distance from not only the style in question, but also anything which might be seen by others to be a genuine emotion. Litt’s style is not to have a style. Or to have so many styles that no one could ever accuse him of having anything so conservative, traditional or conventional as a style.

Litt’s idea is to write a book for each letter of the alphabet, adopting a new genre each time. The project began with a collection of short stories called Adventures in Capitalism (1996), which combines Douglas Coupland’s anthropological interest in pop culture with the sort of artistic pretension which English literature graduates favour.

At the time of writing, the project has reached King Death (2010), a detective story based on the deliberately ridiculous premise that a disembodied heart will slide slowly enough down a roof for it to be identifiable as a human organ.

@LitBritish #DigiPoems has brought together poets and digital artists from Southern Africa and the UK to create 6 new poetry-fi… https://t.co/EUfCfxjQ2f
(2 days ago)

@LitBritish Kicking off this Thursday, @bbccslfest festival of poetry, live from Coventry and across @bbcarts Tune in online… https://t.co/uluh2aEWGB
(2 days ago)