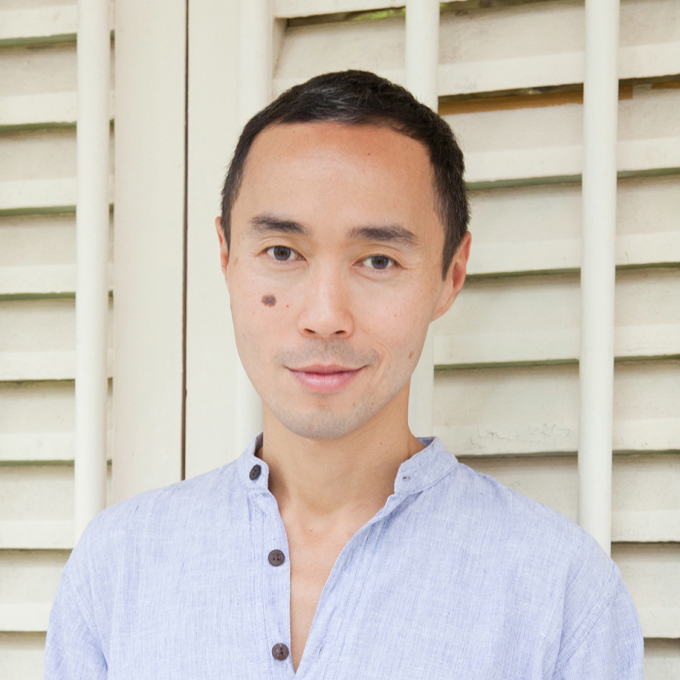 Tash Aw was born in Taiwan to Malaysian parents and grew up in Kuala Lumpar.

He moved to England in his teens, and studied Law at the Universities of Cambridge and Warwick. He moved to London and undertook various jobs, including working as a lawyer for four years. He then studied Creative Writing at the University of East Anglia.

His first novel, The Harmony Silk Factory (2005), won the 2005 Whitbread First Novel Award, and the Commonwealth Writers Prize (South East Asia and South Pacific Region Best First Book). It juxtaposes three accounts of the life of Johnny Lim, a Chinese peasant in rural Malay. His subsequent novels are Map of the Invisible World (2009), set in Indonesia and Malaysia in the mid-1960s, and Five Star Billionaire (2013). In 2019 he published We, the Survivors, with Fourth Estate.

His work of short fiction Sail won the O. Henry Prize in 2013 and he has had pieces published in A Public Space and the landmark Granta 100, amongst others.

The Harmony Silk Factory (2005) made the Man Booker Prize longlist, won a Commonwealth Writers Prize and the Whitbread First Novel Award, making it one of the most garlanded literary debuts since Zadie Smith shook things up with White Teeth (2000).

Its author, Tash Aw, was born in Taiwan and grew up in Kuala Lumpar. In his late teens Aw moved to England to study Law at Cambridge. After a brief career as a lawyer he took the Creative Writing MA at UEA, before publishing a first novel which Doris Lessing described as "unputdownable".

Aw is inspired by heavyweight writers such as Faulker, Nabakov, Conrad and Flaubert, and wears those influences on his sleeve. From Faulkner, he has taken multiple narrators and non-linear narrative; from Nabakov a delight in the possibilities of language; from Conrad an interest in the dark, nightmarish and revelatory aspect of journeys; and from Flaubert a heightened, intense reality generated by deliberate and sensitive use of detail. In essence, The Harmony Silk Factory is a story about the telling of stories, although its post-modern trickery is subtle rather than showy. It is perhaps Aw’s multiplicity of perspectives – by birth, upbringing and education he is able to draw on experience and knowledge of three distinct cultures – that drew him towards the kind of fiction in which a single omniscient viewpoint is eschewed.

Set before, during and after the Japanese invasion of British-administered Malaya in the 1940s, The Harmony Silk Factory is the story of Johnny Lim, poor son of Chinese immigrants, who, we are told, became a legendary textile merchant, smuggler, political activist and murderer in the Kinta Valley. The first part of the novel is narrated by his son Jasper. Keen to understand the truth of a father he calls a "liar, a cheat, a traitor and a skirt-chaser", Jasper has devoted many years of his life to the pursuit of ‘The True Story of the Infamous Chinaman called Johnny’. From early on Jasper reveals himself to be that most familiar of figures: the unreliable narrator. "We all know the retelling of history can never be perfect," he says, "especially when the piecing together of the story has been done by a person with as modest an intellect as myself." However, far from the corrupt, womanising ‘monster’ Jasper would have us see, the Johnny we are shown is quite different. While full of undoubted guile he is a quiet and sensitive man, the victim of bullying British managers in the tin-mine where he works, a diligent worker and an inspired salesman. Johnny’s brilliant gift with machines is resented by his bosses and, after being forced out of the mine through no fault of his own, he ends up with a new career in the Tiger Brand Trading Company, which he is eventually to take over.

The second and third parts of the novel deal with the honeymoon trip to the mysterious Seven Maiden Islands which Johnny takes with his beautiful wife Snow Soong, daughter of the wealthiest man in the valley. Snow and Johnny travel there in the company of three chaperones: Mamoru Kunichika, a sophisticated Japanese professor, repugnant English mine-owner Frederick Honey, and Honey’s compatriot, the effete aesthete Peter Wormwood, who sets himself up as Johnny’s confidante. Snow, an assured and elegant woman, is not in love with Johnny and is suspicious of, although attracted to, the professor. Part two takes the form of her diary and tells of the group’s near disastrous voyage to the island and what takes place upon their arrival. Part three is narrated by the elderly Wormwood who, from the overgrown garden of his old people’s home, looks back upon his flight from England in search of a ‘tropical Arcadia’ in the East. Wormword recalls his meeting with Johnny Lim and the others, and his own version of what happened on the island.

Like Akira Kurosawa’s 1950 film Rashômon, The Harmony Silk Factory deals with the near impossibility of knowing someone, the deception of appearances and the problematic nature of testimony. Jasper wants us to see his father as a man of malice; Snow shows Johnny to be naïve and ineffectual; and Wormwood portrays an enigmatic figure with an enquiring mind distinct from those around him. Their conflicting treatments tell us as much about their own characters and prejudices as they do Johnny Lim. Who are we to trust? Who is telling the truth? Whose version of events should we believe?

The ambition, assurance and confidence of Aw’s debut novel is impressive. From its formal daring – particularly the decision to use multiple narrators – to the broad sweep of its narrative, Aw has seemingly done anything in his power to avoid writing an autobiographical bildungsroman. Most readers will know very little about the history of Malaysia and the fight for control of South East Asia in the middle of the last century. In literature it has received little attention. Most English-speaking readers will know from the work of Anthony Burgess and his trilogy on the end of Empire. And in a sense, Aw’s book fulfils one of Hilary Mantel’s prescriptions for what makes a novel a novel: it brings us news.

The Harmony Silk Factory is far stronger in its truly striking opening section. Jasper Lim is a fine creation, full of false modesty and paper-thin self-deprecation. In the second and third parts, Aw is not quite able to capture the bite, wit and energy of his opening narrator. The Soong and Wormwood voices do not convince in the same way and the reader cannot help but long for the return of Jasper. Nevertheless, the gradual metamorphoses in the novel’s mood and thematic emphasis, from the dash and impudence of Jasper’s mischievous pursuit of truth, to the regret and emotional pain of Peter Wormword’s resigned confessional, is affecting. Aw handles this shift in tone remarkably well. It suggests he has quite a future ahead of him.