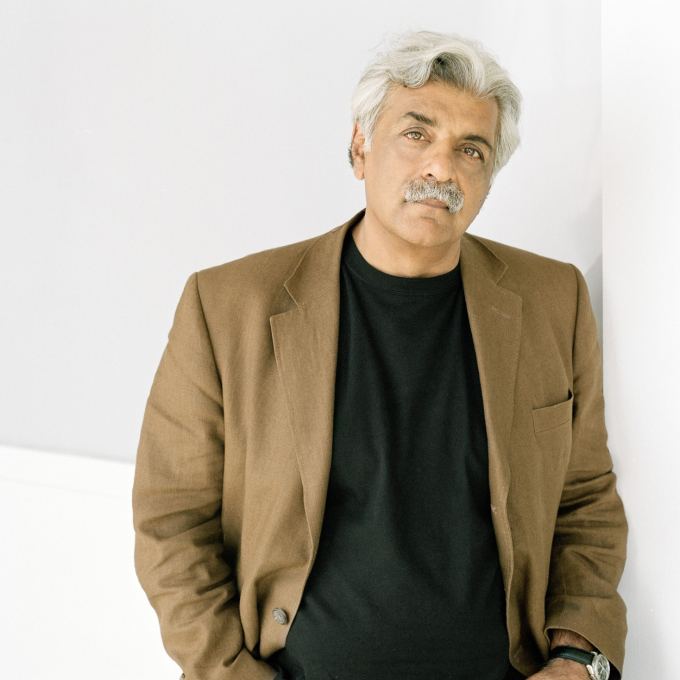 Writer, journalist and film-maker Tariq Ali was born in Lahore in 1943.

He was educated at Oxford University, where he became involved in student politics, in particular with the movement against the war in Vietnam. On graduating he led the Vietnam Solidarity Campaign. He owned his own independent television production company, Bandung, which produced programmes for Channel 4 in the UK during the 1980s. He is a regular broadcaster on BBC Radio and contributes articles and journalism to magazines and newspapers including The Guardian and the London Review of Books. He is editorial director of London publishers Verso and is on the board of the New Left Review, for whom he is also an editor. His fiction includes a series of historical novels about Islam: Shadows of the Pomegranate Tree (1992), The Book of Saladin (1998), The Stone Woman (2000), A Sultan in Palermo (2005), and Night of the Golden Butterfly (2010). These five books are collectively known as 'The Islam Quintet'.

His non-fiction includes 1968: Marching in the Streets (1998), a social history of the 1960s; Conversations with Edward Said (2005); Rough Music: Blair, Bombs, Baghdad, London, Terror (2005); and Speaking of Empire and Resistance (2005), which takes the form of a series of conversations with the author. The Leopard and the Fox (2007) is the script of a three-part TV series commissioned by the BBC and later withdrawn, and includes the background to the story. His books of essays include The Clash of Fundamentalisms (2002), and The Protocols of the Elders of Sodom (2009).

Although he published his first novel, Redemption (a political satire set in contemporary Europe and America) in 1990, and has published three acclaimed works of fiction since, Ali is still perhaps best known for his work with the New Left and his non-fictional works of political biography, autobiography, history and politics. The reader trying to get to grips quickly with the scale and ambition of Ali's voluminous work, as well as his dual interests in literature and politics could do worse than buy a copy of his recent collection, The Protocols of the Elders of Sodom (2009). In 300 or so pages, this book exposes the reader to his public and personal thinking over the past 40 years, including incisive discussions of some of the world's leading contemporary authors, from Joyce, to Roth, Solzhenitsyn and Rushdie.

Ali's political activism is inspired by the revolutionary years of the 1960s and he returns to this decade in several of his volumes. Street Fighting Years: An Autobiography of the Sixties (1987) documents some of the key moments and movements of the decade. The book follows a chronological structure and is at once an autobiographical account of the author's political life and an intimate biography of a crucial period of post-war world history. Street Fighting Years, which develops out of a book Ali published a decade before (1968 and After: Inside the Revolution, 1978), includes passionate accounts of Vietnam, Che Guevara, Paris in 1968 and the Black Power Movement in the United States. In his more recent book, 1968: Marching in the Streets (1998), Ali takes a closer look at that pivotal year of the 1960s. Co-written with his partner, Susan Watkins, and combining incisive commentary with photography, the book offers among other things a stunning, evocative visual narrative of the period. Moving through 1968 month by month, it also offers a meticulous re-vision of a momentous year. What is arguably most significant about Street Fighting Years and 1968: Marching in the streets (1998), though, is their attention to the transnational dimensions of the 1960s. To read Ali's work is to have challenged those easy associations of 1968 with street protests in Paris, Washington or New York. Moving adroitly between Spain, Italy, the Caribbean, India, Pakistan, Mexico, China, Greece, Sweden, the Soviet Union, Germany and Brazil (the list goes on) these books expose the global conditions of 1968 and their ramifications outside the over-developed West. Like Street Fighting Years, which was written 30 years after the events it describes, his latest work, The Idea of Communism (2009) is published to coincide with the twentieth anniversary of the fall of the Berlin Wall. Both books do more than record history; they seek to refresh it, to make it newly relevant: Communism, along with revolutionary politics, is given a new breath of life by Ali. Of course, Ali's explosion of the myth of '1968' (or '1989') as a singularly Western discourse is at least partly informed by his own post-colonial background as a Pakistani migrant living in London. South Asian history and politics are never far from Ali's thoughts, as books like Can Pakistan Survive? (1983) and The Nehrus and the Gandhis: An Indian Dynasty (1985) and The Assassination: Who Killed Indira G? (2008) suggest. Other books, such as Masters of the Universe: NATO's Balkan Crusade (2000) deal with the neo-colonial implications of European and U.S. policy. Most recently, The Clash of Fundamentalisms (2002) provides a provocative, polemic response to the events of September 11th 2001. Ali’s political writing carries a new urgency and relevance following 9/11 as can be evidenced in the searing critiques contained within Bush in Babylon (2003), Rough Music: Blair, Bombs, Baghdad, London, Terror (2005) Speaking of Empire and Resistance (2005) and The Duel: Pakistan on the Flight Path of American Power (2008). The latter is a particularly stimulating account of Pakistan's new intimacy with the US following the collapse of the twin towers, as well as the tensions this intimacy has provoked both within Pakistan country and between nations. Meanwhile, in Pirates of the Caribbean: Axis of Hope (2006), Ali ventures into less documented territory with a meditation on the significance of the revolutionary Venezuelan leader, Hugo Chavez Frias.

Where Ali's political writings centre on the divisions and tensions between East and West, Ali's fiction also explores their crossings, overlaps and mixings. Shadows of the Pomegranate Tree (1992) is the first of Ali's quintet, which also includes The Book of Saladin (1998), The Stone Woman (2000) and A Sultan in Palermo (2005). These award-winning historical novels explore the encounter between the Christian West and the world of Islam. Shadows of the Pomegranate Tree is an enthralling account of Spain (the Iberian Peninsula) and the fall of Muslim Granada to Christendom. Ali manages to bring a warmth and intimacy to his tale by refusing to offer the distanced, panoramic, 'objective' perspective of formal history. Instead fiction is skilfully combined with, and allowed to bleed into, fact. Ali's talent is in evoking the local colour and detail of al-Andalus (Moorish Spain) through the eyes of a single family. The tragic, tenebrous survival of this family following the collapse of their world at the end of the fifteenth century casts a long shadow. The novel is much more than an historical fiction, it is an uncanny parable about the uncertainties facing late twentieth century Europe. As Ali puts it at the end of his prologue, "Over the embers of one tragedy lurks the shadow of another".The Book of Saladin takes us even further back in history to the twelfth century. As with Shadows of the Pomegranate Tree, the second novel has eerie implications for present day society, returning, as it does, to the conflict between Christianity and Islam. Set in Cairo, Damascus and Jerusalem, the book is a fictional memoir of Saladin, the Kurdish liberator of Jerusalem. The narrative is told by Ibn Yakub, Saladin's Jewish scribe, but the resulting tale is ultimately more than that of one man. As it progresses Saladin's narrative is forced to sit alongside those of others (Saladin's favourite wife, Jamila, the beautiful Halima, Amjad the eunuch, even the scribe himself!) in a tale of multiple voices and perspectives. Through these 'minor' voices, Ali allows marginal history to take centre stage. The same is true of Ali's most recent work in the quartet The Stone Woman (2001). A fictional account of the decline of the Ottoman Empire at the close of the nineteenth century, it centres on the aging figure of Iskander Pasha, descendant of the Sultan's favourite courtier and himself now a wealthy man. It is a story of masters and servants beset by the insecurities and neuroses that are symptoms of the fall of Empire. It is a book that demands a re-interrogation of the West itself. It is perhaps unsurprising within this context that Ali was a close friend of the late intellectual, and author of Orientalism (1978), Edward Said (see Ali’s Conversations with Edward Said, 2006).

The topical and polemical qualities that mark all of Ali’s fictional and non-fictional work recently courted censorship when the BBC refused to put into production a three-part script it had commissioned Ali to write. The Leopard and the Fox (2007) concerned the life and death of Zulfikar Ali Bhutto. It will be interesting to see if the BBC revisits this decision following the assassination of Zulfikar’s daughter, Benazir Bhutto, in December 2007.

2017
The Dilemmas of Lenin: Terrorism, War, Empire, Love, Revolution
2016
Permanent Counter Revolution
2015
The Extreme Centre: A Warning
2015
The New Adventures of Don Quixote
2014
The Rivals
2011
Kashmir: The Case for Freedom
2011
The Trials of Spinoza
2011
On History: Tariq Ali and Oliver Stone in Conversation
2010
Fear of Mirrors
2010
The Obama Syndrome
2010
Night of the Golden Butterfly
2009
The Protocols of the Elders of Sodom
2009
The Idea of Communism
2008
The Assassination: Who Killed Indira G?
2008
The Duel: Pakistan on the Flight Path of American Power
2007
A Banker for all Seasons: Crooks and Cheats Inc.
2007
The Leopard and the Fox
2006
Pirates of the Caribbean: Axis of Hope
2006
Conversations with Edward Said
2005
Rough Music: Blair, Bombs, Baghdad, London, Terror
2005
Speaking of Empire and Resistance
2005
A Sultan in Palermo
2003
Bush in Babylon
2002
The Clash of Fundamentalisms
2000
The Stone Woman
2000
Masters of the Universe: NATO's Balkan Crusade
2000
Snogging Ken
1999
Fear of Mirrors
1998
The Book of Saladin
1998
Ugly Rumours
1998
Trotsky for Beginners
1998
Fear of Mirrors
1998
1968: Marching in the Streets
1998
Revolution from Above: Where is the Soviet Union Going?
1992
Necklaces
1992
Shadows of the Pomegranate Tree
1990
Moscow Gold
1990
Redemption
1989
Iranian Nights
1987
Street Fighting Years: An Autobiography of the Sixties
1985
The Nehrus and the Gandhis: An Indian Dynasty
1984
Who's Afraid of Margaret Thatcher?: In Praise of Socialism
1984
The Stalinist Legacy: Its Impact on 20th-Century World Politics
1983
Can Pakistan Survive?: The Death of a State
1978
Chile, Lessons of the Coup: Which Way to Workers' Power?
1978
1968 and After: Inside the Revolution
1970
The Coming British Revolution
1970
Pakistan: Military Rule or People's Power
1969
The New Revolutionaries: A Handbook of the International Radical Left (editor)

@TariqAli_News RT @RMTunion: Second strike day sees huge turnout on pickets across the country: " @grantshapps needs to get in the room or get out of the…
(1 days ago)

@TariqAli_News RT @wikileaks: Mike Pompeo has been summoned by a Spanish court to testify over claims the US plotted to assassinate Julian Assange @Telegr…
(1 days ago)