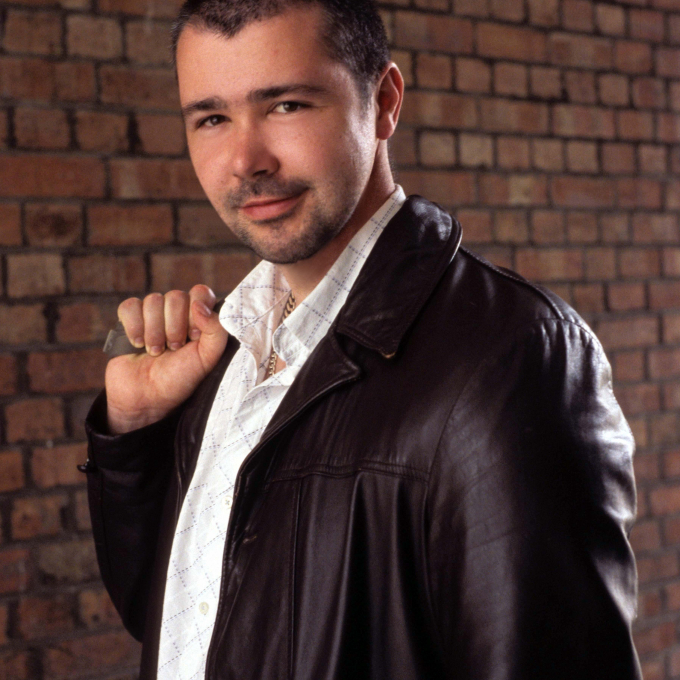 Steven Hall was born in Derbyshire in 1975.

His first novel, The Raw Shark Texts, won the Borders Original Voices Award, the Somerset Maugham Award and was shortlisted for the Arthur C. Clarke Award. The book has been translated into twenty-nine languages and a film adaptation is in development.

Steven has written for Granta Magazine, Lonely Planet and Doctor Who, and contributed to the computer games Crysis 3 and Ryse: Son of Rome.

In 2007 he was listed as one of the Waterstone’s 25 Authors for the Future and in 2010 the Daily Telegraph named him as one of Britain’s best twenty British novelists under forty. In 2013 he was named as one of Granta’s 20 Best Young Novelists.

Steven is currently working on his second novel, an infinite text about the death of print and linear narrative, titled The End of Endings. He is also adapting his short piece ‘Stories for a Phone Book’ into an interactive film/series, and developing a “top secret project for the National Theatre".

Gleefully dancing on the fine line between what critics have called “exuberance” and “whimsy”, Steven Hall’s unpredictable literary imagination is one of the most distinctive in contemporary British writing.

Some are charmed, and others baffled by the intellectual range and the iconoclasm that marks the often visually striking pages of his work. In April 2013 Hall was named as one of the prestigious list of Granta magazine’s 20 Best Young Novelists, confirming that his mixture of technological sublime and formal experimentation will continue to perplex and exhilarate in equal measure.

Hall has proven himself in a range of different forms, including short stories, non-fiction, drama and – not entirely surprisingly - even contributed to computer game design. Across these modes, he has returned to certain key obsessions: stand: the enigma of science and the allure of knowledge, identity and the quest for the self, the contradictions of information revolutions, and the long pre-history of computing. Throughout, Hall filters this through a series of repeated invocations of forebears and kindred spirits such as Herman Melville, Gertrude Stein, W.G. Sebald and Paul Auster, whose ironic, encyclopaedic minds license and catalyse his own literary investigations.

Most immediately striking is Hall’s typographical and visual games, in which he toys with the traditions of the printed page. An early instance was his highly amusing piece ‘Stories for a Phone Book’ (2005), which printed an entire two-page entry for names clustering around the name ‘Storey’, annotating each with commentary that developed into a cultural shadow narrative.

A further example is his story ‘What I Think About When I Think About Robots’ (2010). The tale is really two pieces that run alongside each other. The main text is a deadpan non-linear discussion of the origins of the modern robot in the 1850s, reflecting on the myth and reality of automation technologies. “One of the most strikingly consistent things about robots over their long history” the narrator remarks philosophically, is that they seem to be perpetually ‘tomorrow’s technology’. The robot is always just beyond the curtain, waiting in the wings, always about to arrive and then … not doing so. The robot is the Godot of practical science.” Whilst this discussion continues, striking indent conversation established between the author ‘Steven’ and the robot ‘ALICE’, conducted in boxes to the right and left of each page, which shift from mundane to strangely moving. It is a good example of how Hall’s experiments work. By the close of the story, Hall has justified the excesses of his conceit, establishing a dual narrative that sparks in a compelling and sometimes sinister way.

Compared with such excursions, the opening of his debut novel The Raw Shark Texts might appear straightforward and self-consciously clichéd “I was unconscious, I’d stopped breathing” begins its narrator, “I had no idea who or where I was.” The hero Eric Sanderson wakes after some kind of trauma to discover that he knows nothing of what has happened to him, and finds notes from ‘The First Eric Sanderson’, his own self before the memory loss, telling him of his identity and what he should do next. After being diagnosed with dissocative amnesia by a psychologist, he retreats to his flat to begin the task of reformulating an identity for himself, and to fight off an abstract entity that the novel introduces, ‘Ludovican’, the “thought fish” or shark of the title. It is a remarkable and disorientating journey. In attempting to sum up the miscellania of elements that make up the novel, Tom McCarthy in the London Review of Books counted up some of its elements: “The book has a girlfriend left behind on Naxos; it has a sea-bound vehicle rigged together from bits of technological hardware (its hull and cabin made from fax machines and phone lines, a garden strimmer and a steering-wheel); it has a knowing replay of the final sequences of the film version of Jaws; it even has a shark attack that looks ‘like a slow-motion car crash’” (March 2007).

In purely literary terms, The Raw Shark Texts fascinates most as a series of carefully modulated exercises in pastiche. The opening is rather flatly noirish: “I felt that prickling horror, the one that comes when you realize the extent of something bad – if you’re dangerously lost or you’ve made some terrible mistake – the reality of the situation creeping in through back of your head like a pantomime Dracula”. This engaging but undemanding style gives way to deeper engagement in myth, symbol and literary reference, as it inhabits the voices of various recognizable authorial signatures.  The kinship with Auster emerges through the doppelganger motif and the off-kilter detective framework; in its engagement with inset photographs and wry humour, Hall tries on the mantle of Sebald. Throughout, the proliferating discursive shifts and changes in tone lead us back to the Melville of the Confidence Man and that other baggy work devoted to creatures of the sea, Moby Dick.

Like any self-respecting experimentalist, Hall’s novel has enjoyed a divided critical response. Patrick Ness in the Guardian admitted that it was “a novel only a certain type of undergraduate could love, and the list of ultra-cool pastiches is extensive: The Matrix … Mark Z Danielewski's House of Leaves, Chuck Palahniuk, and especially Haruki Murakami's Hard-Boiled Wonderland and the End of the World.” (March 2007). Others bridled at the formal elements, such as the “typographic tricksiness and rather stale pseudo-avant-garde ideas about texts and communication” which echo “the self-conscious conceptual cul-de-sac that was concrete poetry … pages and pages of the book are festooned with gobbets of text made up to look like sharks.” (nth position, 2008). To Tom McCarthy, however, “What saves this book, and in fact makes it really quite good, is the most conventional thing in it: a love story. Interspersed among the dramatisations of what are, ultimately, commonplace theories about virtuality and the emergence of artificial life are scenes that, without the slightest hint of sci-fi, depict a real life – that of Eric’s girlfriend, Clio – lost.” (LRB, March 2007). As in his stories, it was ultimately when Hall managed to marry his experimental verve to humanistic detail that readers are likely to be most satisfied.

The energy and sheer inventiveness that was on display in the Raw Shark Texts made Hall a logical and necessary inclusion on the Granta Best Young Novelists roster. No matter how trying some find his style and approach, there is, as Patrick Ness concedes, “an exuberance here that keeps the self-conscious cult aspects from getting irritating. (Guardian, March 2007)

Hall acknowledges his influences directly and with enthusiasm, and his whimsy with typeface and page layout is usually to a purpose.”Hall is currently working on a second novel, The End of Endings, adapting the early story ‘Stories for a Phone Book’ into an interactive film series, and developing what his publicity terms.” (www.rawsharktexts.com)

@stevenha11 RT @Foyles: Go down the rabbit hole with #MaxwellsDemon - the twisty new novel from @stevenha11 - or just stay safe on the outside and look…
(11 days ago)

@stevenha11 RT @canongatebooks: Maxwell's Demon follows writer Thomas Quinn as he is pulled into a labyrinth, exploring the true nature of language, th…
(1 months ago)