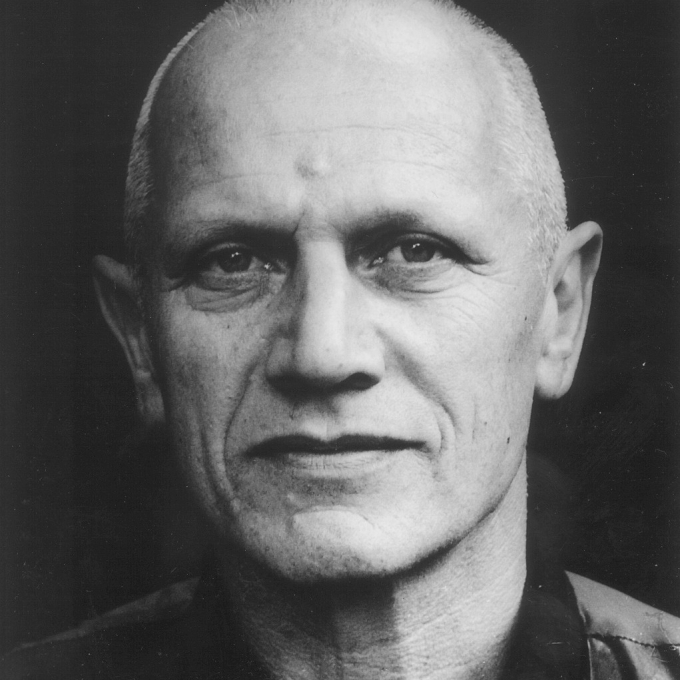 Writer, theatre director and actor Steven Berkoff was born in 1937, in Stepney, East London. Educated at the Raines Foundation Grammar School, he trained to be an actor at the Webber Douglas Academy in London, and later in Paris.

In 1968, after working in repertory theatre, he founded the London Theatre Group, working with a group of actors to perform an adaptation of Franz Kafka's story In The Penal Colony. Berkoff has adapted a number of other classic works for the stage, including Kafka's Metamorphosis and The Trial, Poe's The Fall of the House of Usher and Strindberg's Miss Julie. He is also the author of many original plays, including East, first performed at the Edinburgh Festival in 1975 (revived at the Vaudeville Theatre, London, in 1999), Decadence (1982), Greek (1982) and West (1985).

He is the author of several works of non-fiction, including a volume of autobiography, Free Association (1996), a book of stories, Graft: Tales of an Actor (1998), and My Life in Food (2007), a memoir written in essay form, focusing on meals and eating, and Richard II in New York (2008), which gives an insight into his directing of Shakespeare in the US. He also wrote the text for a book of photographs, The Theatre of Steven Berkoff (1992). He has worked extensively as an actor and director. His film appearances include A Clockwork Orange, McVicar, Beverley Hills Cop, Octopussy, The Krays and Rancid Aluminium. His play The Secret Love Life of Ophelia had its UK premiere at the Edinburgh Festival in August 2001. Since then he has written Requiem for Ground Zero (2002), a tribute in verse, and Tough Acts (2003), reflections on people he has worked with on stage and in film. His latest plays include Religion and Anarchy, which premièred in London in 2013, and Harvey (2018).

Recent books include You Remind Me of Marilyn Monroe (2009), a collection of poetry; and the memoirs, Diary of a Juvenile Delinquent (2010) and Tales from an Actor's Life (2011). He has recently published his first novel Sod The Bitches (2015).

In Diary of a Juvenile Delinquent (2010), Steven Berkoff’s latest volume of memoirs, he reveals the family tensions behind his early life and troubled adolescence in London’s Jewish East End during the post-war years. Nevertheless, these insecurities, in particular the relationship with his largely absentee father ("a strange beast"), have proved to be rich sources of energy and inspiration for his prolific writings in several genres – in the cockney rhyming slang and streetwise exchanges of his early plays East (1977), West (1985) and Decadence (1982) for instance. The memoir also recapitulates the closeness to his mother, often centring upon lovingly prepared meals, which no doubt inspired his own lifelong interest and the anecdotes about worldwide cuisine within My Life in Food (2007). And the book significantly concludes with his first day as a drama student in 1958, when he finally realised: "This is what I should be. An actor. The door closed and the lesson began."

Indeed, "this craft [which] would sustain me through thick and even thin for the rest of my life", is what Berkoff is best known for: his acting on stage and film screen, alongside a parallel career as a director. The theatre-going public knows him as a dynamic stage presence. He has often featured in his own adaptations, famously, during the 1970s, of Kafka’s The Trial and Metamorphosis (1981), Poe’s The Fall of the House of Usher (1977), and more recently the tour-de-force one-man show Shakespeare’s Villains. Film fans will recognise him from his numerous supporting and cameo appearances in Hollywood movies – almost invariably typecast as a sadistic bad guy. The film version of his 1982 stage play Decadence, released in 1991 and starring Joan Collins, allows us to appreciate the sheer pent-up fury of Berkoff as an actor, released through the jaunty rhyming couplets of Berkoff the writer. Its outrageously funny and rudely satirical sketches of greed and maliciousness (mostly about class, sex and food) are encapsulated by two socially-contrasting couples - played by the same actors.

Berkoff’s writing began within the experimental London Theatre Group he founded in the late 1960s. As he has not immodestly observed, "like Shakespeare, I did it to fuel my company and create my stock". These were initially the Kafka adaptations, accomplished with innovative physical movement and "non-representational images of human behaviour". What he has also called "the living embodiments of my life" certainly appear in East, which was premiered at the 1975 Edinburgh Festival. The ‘East’ referred to is the East End territory of toughs Les and Mike ("we sworn mates were once the deadly poison of each other’s eye"), local vamp Sylv, as well as the hapless Mum and Dad. Violence becomes language, just as the actors become objects – as when Les turns into a motorbike and Mike rides him: "I streak past those ponces and hairdressers in Minis, Sprites, MGs, menswear salesmen… or ancient Cadillacs driven by aging movie stars cruising for rough trade". The play is "a veritable tour of our golden city" but this era and working class machismo is already vanishing: "Where’s hard Arthur? Where’s all the hard men?"

In Coriolanus in Deutschland (1992) and Meditations on Metamorphosis (1995), Berkoff reflects upon his experiences during these theatrical productions, the creative problems of acting and directing that they’ve raised. I am Hamlet (1989) is more of a close-reading study of the play, albeit an idiosyncratic psychological one: "when you play Hamlet he becomes you… you feel like a prize fighter in a fairground, taking on all comers. Each scene is a new opponent." His writing is pungently anecdotal, the articles and notes sometimes written during location shoots for films, and are collected in Overview (1994) and Shopping in the Santa Monica Mall (2000). They’re well worth reading, particularly his sardonic accounts of ‘Going to the Movies in Hollywood’ or ‘gourmet’ dining during a supersonic flight on Concorde.

His insights on acting can also be glimpsed in his fiction, notably Graft: Tales of an Actor (1998), but the more considered memoir Tough Acts (2003) suits him best of all. The latter is an entertaining series of essays on some of the famous actors and directors he has worked with over the years. They include sharp observations of the restlessly perfectionist Stanley Kubrick and Roman Polanski, the mercurial Leonard Rossiter, Al Pacino, Christopher Plummer, and Eddie Murphy, coming from contrasting British and American approaches. Berkoff’s own professional relationships with them, at times almost personal though usually warily distant, are fascinating. Perhaps most affectionate are his portraits of women: the acting coach Stella Adler, and especially Joan Collins. The latter’s conduct during the filming of Decadence – willing to be stretched in her acting range though insisting upon frequent make-up re-touching and flattering lighting – is "audacious and demanding, yet still with a thin shell of vulnerability".

Much less conspicuously, Berkoff has written a good many poems as well, most recently collected in You Remind Me of Marilyn Monroe (2009). His poetry has generally altered from the satirical rhyming couplets of the early plays to expressively emotional free verse. An example of the latter is ‘The Kiss’, in lines about waking in the night and embracing "my mate": "I turned to face / her suddenly, and in that one desperate second of/  loneliness I turn to hold her fast but firm in my arms as if a / thousand years away and in that one desperate / second I rushed to seize her as if I had returned / home from a desperate voyage". Unpublished poems on his website [stevenberkoff.com] memorialise various victims. Most significantly – he has re-emphasized his Jewish cultural inheritance in recent years – he pays tribute to "the Heroes of the Warsaw Ghetto Uprising", but also a student knifed on a train, and, more quixotically, a baboon (who "even looks like my Uncle Sam") shot dead by a television critic.

With Diary of a Juvenile Delinquent he returns to re-examine his much younger self, not always appreciatively. It includes certain details that many another distinguished actor might have left for posthumous biographical revelation. One can deduce that Berkoff’s inherently physical approach to drama probably originated in his youthful passion for dance halls "Jiving became my life and of course it was your ticket to the female sex". Such encounters with women are rhapsodically described, as are the dangers of young male life in North London during the 1950s. But this is Steven Berkoff’s way: self-revelation, almost confrontation, of fears and uncomfortable truths about human nature and sexuality. The memoir shows how he has drawn upon all this for his great acting career, and throughout his continuously interesting writings.