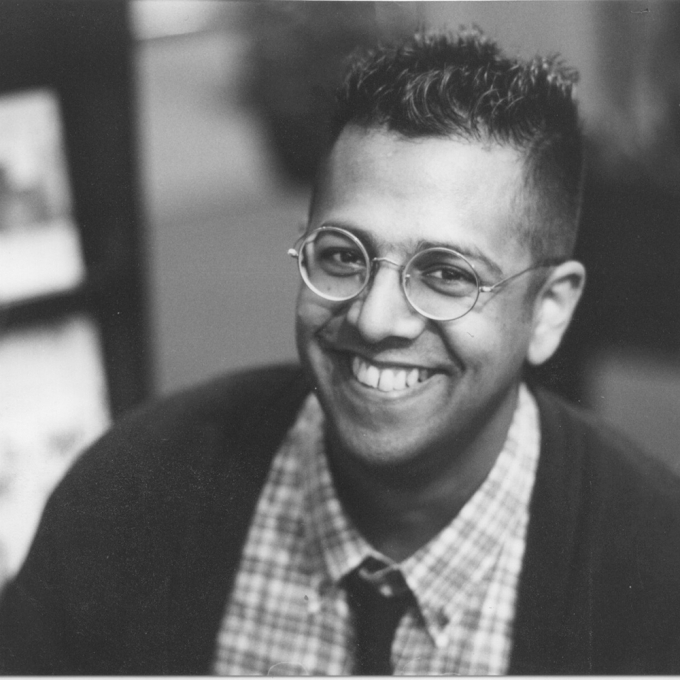 Simon Singh is an author, journalist and television producer, specialising in science and mathematics.

He grew up in Somerset and studied physics at Imperial College, London, studying as a postgraduate at Cambridge University and at CERN in Geneva. He joined the BBC's Science Department in 1990, working as a producer and director. He directed the BAFTA award-winning documentary 'Fermat's Last Theorem' in 1996, exploring one of the most challenging problems in mathematics. His own book, also called Fermat's Last Theorem, was published in 1997.

His second book, The Code Book (1999), explores the history of codes, codebreaking and cryptography. He presented 'The Science of Secrecy', a five-part series for Channel 4 television in 2001, and published a book of the same name (an adaptation of The Code Book), to accompany the series. He also presented theatrical science lectures in London and Edinburgh as part of 'Theatre of Science' with Richard Wiseman.Simon Singh's latest book, written with Edzard Ernst, is Trick or Treatment?: Aternative Medicine on Trial (2008).

Simon Singh is one of a new generation of popular science writers and the first to have a best-selling book with mathematics as its subject.

Fermat's Last Theorem (1997) is a book that, on paper, might never have succeeded with a general audience. The proof of the theorem cannot be demonstrated in a general book, only the twists and turns of events as Andrew Wiles first demonstrated his proof of the theorem at a 1993 Cambridge seminar, then was forced to spend months revising it because a flaw had been found.

Although the proof itself is beyond paraphrase, the theorem itself and its background in Pythagorean geometry is easy to understand. Singh brilliantly uses this universally understood starting point to tell some of the history of mathematics and its great characters - Newton and Euler as well as Pythagoras, Fermat and Andrew Wiles, and he also flatters the reader by including many hands-on mathematical puzzles which are both intriguing and within the competence of the average crossword-puzzler. The book act as a bracing refresher course whilst keeping the reader's attention with the thrill of the chase and the excitement of high intellectual endeavour.

The world of mathematicians is something of a brotherhood, like the Pythagorean one that began the whole business: mathematicians belong to a community and they play by different rules from most people, including scientists. They don't patent their work and are far more open than scientists. Most of the time, that is. Andrew Wiles worked on the problem alone and in secrecy for ten years.

Pierre de Fermat  (1601-65) was one of the great mathematicians of all time. His most famous theorem involves mathematics' cardinal principle: rigorous proof. Mathematical proof is different from and more rigorous than legal or scientific proof. It is absolute, binding for all time and in all possible cases. Pythagoras's Theorem, as everyone knows, states that in a right-angled triangle the square on the hypotenuses (the long sloping side) is equal to the sum of the squares on the other two sides. It is called a theorem because it can be proved for all possible right-angled triangles.Fermat's Last Theorem (technically not really a theorem because it was never proved until 1993), states that if Pythagoras's theorem is expressed in the form z² = x² + y²; there are no values of x, y, and z that will produce whole number solutions for x, y and z raised to powers above 2 (with power 2, ie Pythagoras's original theorem, there are whole number solutions, eg 5, 12 and 13). Fermat's thereom waited 358 years until Andrew Wiles produced a general proof - a remarkable story, but an abstruse one requiring great skill in the telling.

Simon Singh cut his teeth as scientific populariser with five years on the TV programme Tomorrow's World. The book Fermat's Last Theorem grew out of a Horizon programme he made in 1996 on Andrew Wiles and the discovery.

Singh's second book, The Code Book (1999) is a thematic book rather than a single narrative. It deals with codes and cyphers in history - from Julius Caesar, through the Enigma code of World War II to the almost unbreakable codes used to secure transactions on the internet, and the prospect of quantum cryptography.

Singh has mastery of technical material, especially mathematics, and a deft manner with popular exposition. Reading his books, people tend to be surprised to find that they understand concepts which previously seemed beyond them. Both Fermat's Last Theorem and The Code Book have many puzzles for the reader to try.

He is also good on the humanistic side of these stories - the history and personalities involved. In his review of early codes in The Code Book, he includes an account from Herodotus of one Hitaiaeus who shaved the head of a messenger, tatooed a message on the skull, allowed the hair to regrow and dispatched the man on his missions. Singh comments: 'This was clearly a period of history that tolerated a certain lack of urgency'.

Inevitably, Fermat's Last Theorem, with a central story, is a more gripping read than The Code Book, but the latter, especially where it deals with internet encryption and the battle between the privacy of the individual and the government's need to eavesdrop on criminal and terrorist communications, is relevant to every individual. The security of credit card payments (or any sensitive material) depends on a branch of mathematics long thought to be so pure it was beyond any human use: prime numbers. These are numbers, such as 7, 13, 29, 131, 1523, that cannot be divided by any other number, except itself and 1. How wrong that proved to be, Singh explains: all codes in history, until the 1970s, required a key - for your recipient to be able to decode the message he or she must first be sent a key. In the 1970s three mathematicians at MIT developed a one-way system of cryptography which did not need a key. It relies on the fact that mathematicians have never been able fully to understand prime numbers - they seem to be scattered amongst the numbers at random. If you multiply two large prime numbers together it is virtually impossible for anyone to work out from the product what the original numbers were. To decrypt credit card details passed over the internet the original two numbers are needed, and the information being passed by the consumer to the online company only contains the large multiplied number. Simon Singh's third book, The Science of Secrecy (2000), is actually a cut-down version of The Code Book and based on the TV series he made for Channel 4.

It is the ability of a writer like Simon Singh to illuminate, with panache, such hidden but vital corners of life that has made popular science an indispensable addition to literature. Such books are not textbooks, although they are highly educational; they have much of the verve of a novel, or at least a literary biography, and they have brought science within the humanities, fulfilling Wordsworth's ancient dream: 'If the time should ever come when what is now called science, thus familiarised to men, shall be ready to put on, as it were, a form of flesh and blood, the Poet will lend his divine spirit to aid the transfiguration, and will welcome the Being thus produced, as a dear and genuine inmate of the household of man'.

2013
The Simpsons and their Mathematical Secrets
2008
Trick or Treatment?: Alternative Medicine on Trial
2005
The Big Bang
2000
The Science of Secrecy
1999
The Code Book
1997
Fermat's Last Theorem

I have always had a passion for science and mathematics and my books are an effort to spread this passion to others. Because of my background in television, I try to include a narrative in my books. However, explaining the mathematical and scientific ideas is paramount and the narrative is merely a way of encouraging readers to engage with the ideas. In general my books describe the development of a topic (maths, cryptography, cosmology) over the course of centuries or millennia. This means that I can start with relatively simple concepts and show how our understanding has evolved. There is also the advantage of being able to introduce some of the rich characters from the history of science.

@LitBritish Make sure to listen in on 1 October: https://t.co/FvxuTNUpPS
(2 days ago)

@LitBritish RT @DeanAtta: The National Centre for Writing (@WritersCentre) has produced this excellent list of literature organisations (so many of the…
(3 days ago)

@LitBritish Congratulations to David McKee on the @Booktrust #LifetimeAchievementAward. What's your favourite character of his?… https://t.co/uzMR4K2RmL
(3 days ago)