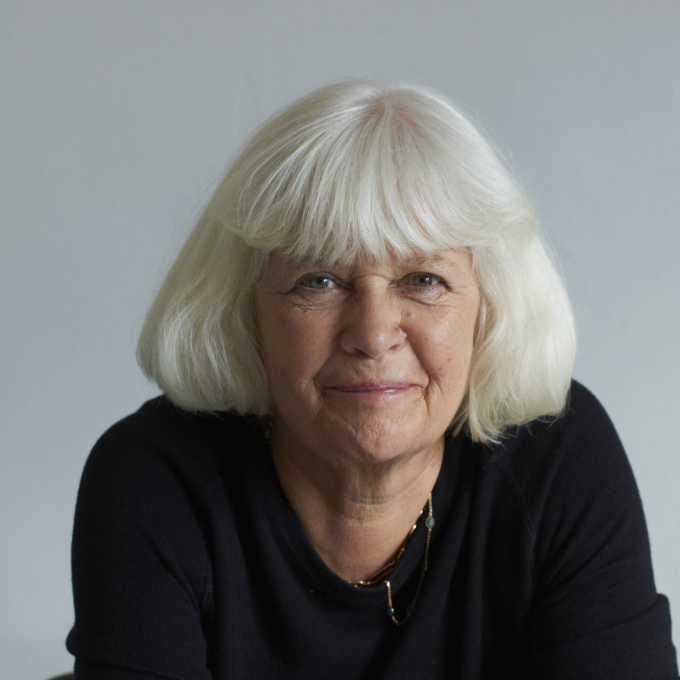 Shena Mackay was born in Edinburgh in 1944. She left school at the age of 16 after winning a poetry competition in the Daily Mirror. Her first book, published in 1964 but written when she was still a teenager, consists of two novellas, Dust Falls on Eugene Schlumburger and Toddler on the Run. Her first novel, Music Upstairs (1965), is set in London in the early 1960s.

There was a break in her writing between the novel An Advent Calendar published in 1971 and the collection of short stories Babies in Rhinestones and Other Stories, published in 1983. The novel A Bowl of Cherries (1984) was published by Harvester Press, a small independent publisher in Brighton, on the recommendation of the novelist Iris Murdoch.

More recent novels include the black comedy Redhill Rococo (1986), winner of the Fawcett Society Book Prize; Dunedin (1992), which won a Scottish Arts Council Book Award; and the acclaimed The Orchard on Fire (1995), which is set in the early 1950s and tells the story of a young girl, April, living in a small village in Kent, who attracts the increasing attentions of Mr Greenidge, an older man. It was shortlisted for the Booker Prize for Fiction in 1996. The Artist's Widow (1998) is a satirical portrait of the contemporary London art world. Heligoland (2003), is the story of one woman's search for Utopia.

Collected Short Stories (1994), includes short stories from her three previous collections, Babies in Rhinestones and Other Stories (1983), Dreams of Dead Women's Handbags (1987) and The Laughing Academy (1993). The World's Smallest Unicorn and Other Stories was published in 1999.

Shena Mackay lives in London. She is a Fellow of the Royal Society of Literature and also Honorary Visiting Professor to the MA in Writing at Middlesex University. Her latest book is The Atmospheric Railway: New and Selected Stories (2008).

Shena Mackay was recently profiled in The Observer newspaper (9 November 2008) to mark the publication of The Atmospheric Railway: New and Selected Stories (2008).

Interviewer Rachel Cooke confessed to being ‘a fan’, and wrote that she associated Mackay ‘with a certain part of south London: Norwood, Crystal Palace, Sydenham; places whose suburban indignities, from crisp packets to car parks, she has often captured so beadily and yet so beautifully’. Mackay’s fiction can indeed be thought of as generally located in the London suburbs, yet it is no kitchen-sink realism. Instead, we as readers discover a darkened suburbia, viewed with an insistently satirical eye on human frailties and pretensions, as well as poetic suggestiveness and a dash of Magic Realism. Her characters in these stories are, as ever, struggling to cope, but Mackay imparts both humour and poignancy to their plights. For instance, the painter Harriet in ‘The Most Beautiful Dress in the World’ is ‘self-employed, meaning she has to suffer’ and has to endure ‘an enervating limbo peppered with frustration and irritability’. In ‘Evening Surgery’, a doctor examining an elderly person reflects that ‘time unravels us … like old, colourless silk flags in churches, which have outlasted their cause’.

Writers such as Mavis Cheek and Candia McWilliam (a fellow Scot) could be compared to her, but Mackay has a peculiarly tragic-comic angle on life all of her own, evident in numerous novels and collections of stories since her precocious debut in 1964 with Toddler On the Run. Her writing career had an understandable hiatus while she raised her family, but since then she has been short-listed for the Booker Prize for Fiction with The Orchard on Fire (1995); and more recently for the Orange Prize for Fiction with Heligoland (2003). Her current high reputation began with blackly comic novels of family life under severe pressure, as in A Bowl of Cherries (1984). In one of several deliciously embarrassing scenes, Daisy’s viciously social-climbing estate agent husband tells his own mother off for the meal she has prepared: ‘Surely … you must realize that I’ve moved out of the stew and dumplings bracket?’ It continues, ‘Daisy saw pain run across Nanny’s face like a drop of water on a hot plate, and then she bent to talk to the cat. The dumplings swelled like clouds, massive. They turned to stone’. Elsewhere in the novel we encounter a libidinous religious fanatic, and witness a fight between desperate shoppers at a sale. Men get a particularly rough ride: the only sympathetic male character is killed by a runaway cow.

Mackay is a skilled observer of the British class system and its discontents. In many ways, the years of Mrs Thatcher’s Government and its economic effects on people’s lives provided an ideal backdrop for such sardonic fiction. Pearl Slattery in Redhill Rococo (1986) is ‘balanced between respectability and ruin’; as the novel opens she is sleeping with her boss at the sweet factory while her husband is in jail. Patronized by her children and goaded by the pretensions of her neighbours, Pearl is nevertheless an indomitable survivor. Her new lodger, a vicar’s son just released from the same jail as her husband, has fallen in love with her and, to overcome her reluctance, obtains a love potion from a local witch doctor. The painfully comic highlight is a truly awful dinner party when, far from impressing the neighbours, Pearl’s son disgraces himself and the family.

Dunedin (1992) by contrast is a more ambitious and serious novel. The twin narratives are split between contemporary London and the New Zealand of 1909, following the lives of a woman and her ancestor, a Presbyterian minister. Perhaps far better suited to Mackay’s talents are the stories in The World’s Smallest Unicorn (1999). In ‘Death by Art Deco’, for example, a successful woman author employs an aspiring writer as a domestic, with comically disastrous results.

Arguably, The Orchard on Fire, a dark idyll of childhood memory, is her best novel. Full of well-drawn pathos and human comedy, it is set in the Kent village of Stonebridge during 1953. The fears and fantasies of a young girl, April Harlency, are recalled by her when, as an adult, she revisits the village. We quickly become immersed in this pre-television age, and the variety of bustling working characters, as observed by April with a mixture of naïve curiosity and occasional fearfulness. April’s parents are struggling to run ‘The Copper Kettle’, the local teashop, and prepare for the imminent arrival of a new baby, and so she feels neglected. Her best friend Ruby is being beaten at home, and April realizes for the first time ‘the knowledge that a father could injure his child’. She also has to deal with her confused feelings of ‘terrible shame’ about the seemingly avuncular Mr Greenidge’s gropings. In an episode of tragic farce, April’s revenge takes the form of her conviction that Mr Greenidge has murdered his wife, leading to her exhumation.  Around the main action dances a variety of appealing bohemian characters such as Bobs and Dittany – lesbian artists who befriend April and give her refuge. But, one feels, it is really the story of how a highly sensitive young girl became a discontented adult.

Heligoland is also a novel in which the heroine looks back at her childhood from the situation of being middle-aged and unhappy. Rowena Snow, of mixed Indian and Scottish parentage, is first shown as a baby being pushed through a blizzard during the Great Winter of 1946-47 by her beloved aunt. Her childhood listening to the radio has left her with a fantasy of Heligoland as ‘a hazy, faraway, indefinable place of solace and reunion’. Yet she does try to further define it: ‘the Heligoland of her heart was … both an island over unnavigable seas and a fairground roundabout’. Rowena is damaged by life. Her work as a cleaner and carer, and her relationships, have been unfulfilling; and ‘she hasn’t thought about her body for a long time’. The alchemy of the book is that, as the reasons behind her disappointments emerge, so does the means of overcoming them: by her involvement with people when she goes to work at ‘The Nautilus’ community.

As always with Mackay, there are some wonderfully comic scenes, as when Rowena accompanies her friend, the old poet Francis Campion, to the AGM of the Despondency and Madness Society, where they meet up with drunken Orlando Birdbiter and ageing beauty Belle de Groot. Discussing such hazards as Novelist’s Leg, Rowena ‘had no idea a writer’s life was so fraught with dangers’. Rowena recovers from her past. And, at a surprise birthday party at the end, she contemplates going to Scotland with Francis, imagining ‘the Hebrides or Heligoland far away in a misty shimmer on the horizon’. Like many characters in Shena Mackay’s fiction, she has learned bittersweet lessons from life.

2015
Dancing on the Outskirts: Selected Stories
2008
The Atmospheric Railway: New and Selected Stories
2003
Heligoland
1999
The World's Smallest Unicorn and Other Stories
1998
The Artist's Widow
1997
Friendship: An Anthology
1995
The Orchard on Fire
1994
Collected Short Stories
1993
Such Devoted Sisters: An Anthology of Stories
1993
The Laughing Academy
1992
Dunedin
1987
Dreams of Dead Women's Handbags
1986
Redhill Rococo
1984
A Bowl of Cherries
1983
Babies in Rhinestones and Other Stories
1971
An Advent Calendar
1967
Old Crow
1965
Music Upstairs
1964
Dust Falls on Eugene Schlumburger/Toddler on the Run