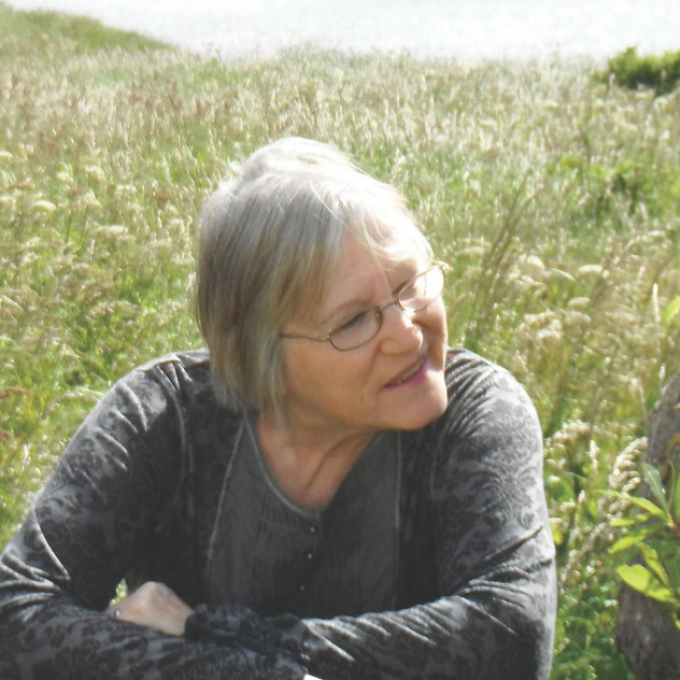 Sheenagh Pugh was born in 1950 and lives in Shetland.

She lived for many years in Wales and taught Creative Writing at the University of Glamorgan. She is the author of several poetry collections, including Id's Hospit (1997); Stonelight (1999), winner of the 2000 Arts Council of Wales Book of the Year Award; The Beautiful Lie (2002), shortlisted for the 2003 Whitbread Poetry Award; and The Movement of Bodies (2005), shortlisted for the T. S. Eliot Prize. Her Selected Poems was published in 1990, and a 'mini-Selected' - What If This Road: and other poems in 2003. A Later Selected Poems was published in 2009.

Sheenagh Pugh also translates poems, mainly from German but also from French and Ancient Greek, and is the author of two novels: Kirstie's Witnesses (1998) and Folk Music (1999).

Her latest collection of poems is The Long-Haul Travellers (2008), which concerns journeys and the fluidity of identity.Her book, The Democratic Genre, published in 2005, is a critical study of fan fiction as a literary genre.

The cover photograph of Sheenagh Pugh’s Selected Poems (1990) shows snooker balls lined up on a green baize table, viewed sideways, and blurred so as to suggest a mysterious luminosity.

This most clearly alludes to her poems celebrating the exquisite skills, and lamenting the chaotic lives, of certain snooker players. These have included ‘Man getting hammered: between frames’, ‘Exhibition’, ‘147’, and the more recent ‘Forgiven’: ‘the joy of talent demands// forgiveness’, it claims, even of a ‘Bad boy, going on fifty’, who is recollected ‘winning a match // on crutches … / your head // jerking on the shot, your shining bloody genius’. But Pugh is no simply romantic elegist. She is a poet with a strong historical sense, and a distinctively wry wit. Indeed, two of these snooker poems – really about the poignancy underlying male bravado – are placed next to ‘Filing the Queen of Scots’, which discloses the captive Queen Mary as a keen billiards player (‘unusually tall / and slender: she must have had / a good reach’).

Taking a wider view of such poems, they can be regarded as part of an extended metaphor throughout her works, from Crowded by Shadows (1977) to The Movement of Bodies (2005), which artfully entangle the personal with the fictional. This is a poet who is typically an observer, seeing human life as a spectator sport - noting how some people play their game well, others badly. Indeed, in an interview (with Sue Tordoff in 2004), Pugh referred to herself as ‘a voyeur by nature’. This seems to extend to her presentation of relations between the sexes, which usually involves looking at the object of desire. Voyeurism itself is the scenario of ‘Eva and the roofers’ (from the 1987 volume Beware Falling Tortoises), describing a woman sunbathing in her garden being overlooked by workmen: ‘All three play the game / as gravely as the steps of a gavotte. / (‘I look to be on offer, but I’m not’. / ‘We’ve no intentions, but a man can dream’.) Like many of her characters, they ‘work on at / their lives, while their minds float out / on an ocean of possibility’. Her preoccupation with other people’s lives has involved summoning up and giving voice to warlike Norse kings, Victorian explorers, castrati singers (‘Senesino / Farinelli’), and what she calls ‘slightly weird and misplaced people’: eccentric loners, railway modellers, football fans on trains sleeping off their drink.

Born in Birmingham and long resident in Cardiff, Pugh could be considered an Anglo-Welsh poet. But in fact as a writer she is very much ‘a citizen of the world’, whose subjects range widely in place, history and cultures. Her collections often include translations, mainly from 17th-century German and French poets. Their subjects tend to be the eternal ones of lost love, the inevitability of death, and carpe diem, though with some light relief. ‘Poem in praise of the most amiable of womankind’, for instance, consists of an exuberant stream of comical epithets about women’s breasts, as the lover persists: ‘Why cover such a useful pair of globes / and hide the latitude of love’s own country? / Oh beautiful; believe me, all your robes / can’t cheat the keen glance of a loving sentry’. And, from her first collections onwards, Pugh has invoked the characters of Norse history and mythology, from Odin to ‘Eirik the Red’, as well as Icelandic sagas and scenes suggested by her own visits there (‘The black beach’) and to the Shetland Islands.

Pugh’s poetry has developed consistently over the years, and has steadily accumulated admirers. These have included the late great Scottish writer George Mackay Brown, whom Pugh visited during the summer of 1993. By her own account, she found him ‘flirtatious in a curiously endearing way … [although] he seemed very much a loner’. The first two poems in her 1999 collection Stonelight pay tribute to him, with ‘The Beachcomber’ picturing the collector of ‘a flotsam of stories’ that are ‘scabbed with rust, scarred / all over by the salt of travel’, who has the keen eye to find in them ‘blackened silver’ and ‘the ghost of a song’. It is followed by an elegiac sequence, ‘The Arctic Chart’, about the searches by various sea captains for Sir John Franklin’s doomed expedition to find the North West Passage, concluding with the sentiments of the widow sponsoring it all (‘Lady Franklin Bay’). This episode of Victorian heroism also inspired Pugh’s 1998 Forward Poetry Prize-winning poem ‘Envying Owen Beattie’, yet this takes another kind of female perspective. Its title refers to the archaeologist who excavated the permafrost-preserved corpses of sailors from the Franklin expedition. In its delicately sensual observation it unearths for us ‘five foot four of authentic / Victorian adventurer, tuberculous, / malnourished: John Torrington // the stoker’. Then it wonderfully lifts from documentary detail into fantasy: ‘you would know all the fairy-tales / spoke true: how could you not try / to wake him with a kiss?’

The Movement of Bodies was a Poetry Book Society Recommendation. Its ironies of history and humanity seem more harshly drawn at times, as in ‘Chocolate from the Famine Museum’, depicting a schoolmaster’s failing attempt to keep the attention of bored schoolboys, whose visit ends in the gift shop where ‘Their faces light up, / for the first time’ and the chocolate they buy flavours their day ‘for ever with the velvet/ dark in their mouths’. In a lighter satirical vein is ‘Best Jesus in Show’, a sardonic story of rival Evangelists at a country event and wondering how to judge them: ‘The log-sawing contest / seemed possible, but they didn’t fancy / raising a hand and telling the logs to part’. And in ‘Buying Vinyl’, a female customer in a DIY store takes a sudden fancy to the handsome young assistant: ‘a good reason to fix / Cal’s eyes with mine for a few moments // while I told him about it. They were brown, / far darker than the vinyl, forest-pool-effect’.

There is a liberal political thread running through her work, expressed in sympathetic vignettes of people caught up in war or the effects of dictatorship. In this book, these include a lion-keeper in Afghanistan: the zoo with no visitors, / just keepers and captives, moth-eaten, / growing old together’. In ‘The Curator and the Art of Concealment’, a picture restorer tells how he hid the human figures proscribed in paintings by the boy soldiers of a fundamentalist regime. Even more characteristic is Pugh’s view of a young Napoleonic soldier, enlisted into the Emperor’s invasion of Russia, starving and ‘aching for warmth’ (‘The Grave of the Grande Armee at Vilnius’). Or, in ‘Adzio’s Story’, a subtle vignette about fiction, the boy who inspired Death in Venice stands ‘between sea and land, looking back / at the real, beckoning into the story’. Sheenagh Pugh’s own beachcombing has brought her a rich harvest of stories.

@LitBritish RT @youngpoetsnet: Can your poems solve the climate crisis? We're delighted to launch a new challenge with @PeoplNeedNature and @LouisaAd…
(1 hours ago)