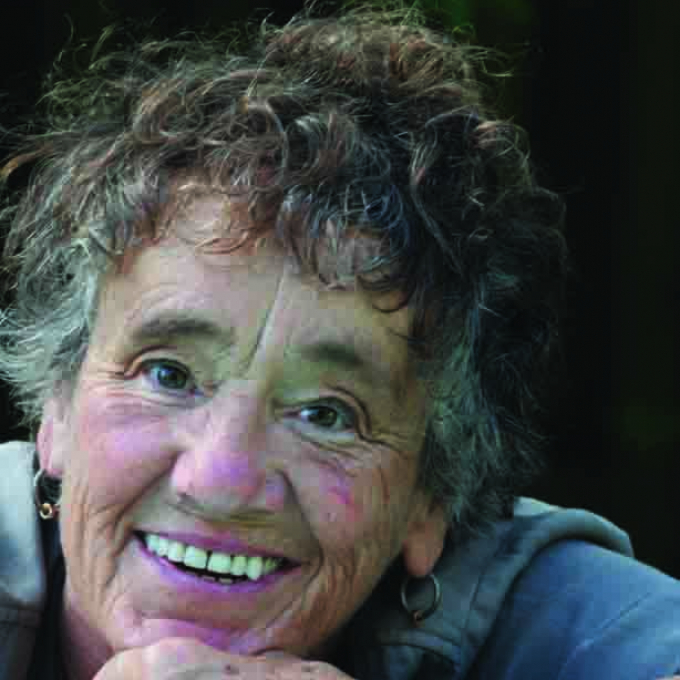 Poet Selima Hill was born on 13 October 1945 in London, England and grew up in rural England and Wales.

She read Moral Sciences at New Hall, Cambridge (1965-7). She regularly collaborates with artists and has worked on multimedia projects with the Royal Ballet, Welsh National Opera and BBC Bristol. She is a tutor at the Poetry School in London, and has taught creative writing in hospitals and prisons.

Selima Hill won first prize in the 1988 Arvon Foundation/Observer International Poetry Competition for her long poem The Accumulation of Small Acts of Kindness, and her 1997 collection, Violet, was shortlisted for the Forward Poetry Prize (Best Poetry Collection of the Year), the T. S. Eliot Prize and the Whitbread Poetry Award. Her book of poetry, Bunny (2001), a series of poems about a young girl growing up in the 1950s, won the Whitbread Poetry Award. A selected poems: Gloria, was published in 2008.

The recent publication of Gloria: Selected Poems (2008), a large volume featuring her work from Saying Hello at the Station (1984) to Red Roses (2006), has showcased Selima Hill as one of Britain’s most peculiarly imaginative poets.

She is also among the most celebrated, having won the Whitbread Poetry Award for Bunny (2001) and been regularly short-listed for other top awards. This is despite often ‘difficult’ subject matters exploring mental illness and sexual abuse, as well as family conflicts and women’s experiences - often of love and loss. She brings to these subjects a vast variety of brilliantly odd imagery: ‘love is like a bag of warm eyeballs / passed from hand to hand in the dark’ (‘Our Softness is Appalling’). And, again taken from Red Roses, ‘our job is to be as calm as a vest. / Our job is to arrange for the arrival / of angels, by the coachload, in white vests’. Her poems are easy to read but difficult to define. Formally they can be very various; some are book-length sequences of brief lyrics or vastly sprawling ‘list’ poems. A sonnet may be followed by a free verse litany. They switch tones abruptly, from naïve to sinister, describing unstable states of passionate love and lust, frustrated rage or fragility.

Her combination of psychological intensity and humorous whimsy has led to comparisons with Sylvia Plath or Stevie Smith. She might equally be likened to the 18th-century poet Kit Smart, as an unclassifiable visionary writing in praise of creation. Like him, she sometimes addresses God, and her obsessions with animals (she spent some of her childhood on farms) is evident in the titles of her books such as Trembling Hearts in the Bodies of Dogs (1994) and Portrait of My Lover as a Horse (2002). Her other main subjects are the family and relations with men, who are necessary but inconvenient: ‘If only You had the sense, O Lord, / to turn my husband into a chicken run’. One of her best-known poems is ‘Please can I have a man’, which imagines an ideal male, ‘who knows the names of 100 different roses, / … [and] who walks like Belmondo in A Bout de Souffle'.   Childhood and its remembered discontents also loom large. The critic Edna Longley has argued that Hill’s work contains ‘forces that drive, or complicate, erotic and familial emotion’. The first half of Violet (1997), for instance, is about a difficult relationship with a sister, ‘someone years of pain had made untouchable, / had dipped in glass for their own good’ (‘The Meeting’).

Hill’s exploration of psychological distress first appeared in The Accumulation of Small Acts of Kindness (1989), cast as the journal of a woman with schizophrenia. This journal form is best realized in Bunny, an intense sequence of short lyrics, its fragmented narrative spoken by a girl who has been taken away from sexual abuse and hospitalized. The raw dislocation of her feelings, her vulnerability and pain are conveyed by the very oddness of the similes: ‘Shame, / like a white balloon, / still rolls its cry / from room to dusty room in search of flight’. ‘Plums’ disturbingly plays with sensual metaphors of the girl’s body and the ripeness of fruit; ‘heavy plums’ with their ‘faint dusting of white bloom’ that ‘intensifies the blue / of their purple’. It is the kind of subject that perhaps only a poet of Hill’s emotional empathy and peculiarity could have really succeeded with.

Of Lou-Lou (2004), Hill commented in the Poetry Book Society Bulletin, Autumn 2004: ‘Subjects? Same old subjects: hair, animals, love, fish. (I told myself to keep away from ‘using my imagination’ but various animals and fish have sneaked in).’ It describes a woman recovering from a mental breakdown, and at times feeling suicidal. Her observations in a diary, kept during the course of her treatment, take place over a summer. It begins on 12th June with her severe alienation: ‘People don’t have faces anymore / and nothing here makes sense except pain’. The patients ‘creep about the ward at night’ and their sleeping pills are ‘like the motherless eggs / of a sort of mutated insect’. By 21 July, there’s a scene in the Night Room, ‘My scream / expands like ballrooms / into which / the duty doctor tiptoes with his needle’. Hill’s trademark animal imagery appears many times, as in the entry for 27 July: ‘Nurses lead us / to and fro / like horses …/ thoroughbreds, / with legs like icicles’. The details are harrowing yet vividly colourful, as when describing a patient’s voice ‘like a clutch of wild parrots / screaming to the doctors / from her hair’. The narrative focus shifts between the woman’s observations of herself and of others, staff as well as the new patients who have ‘got to learn to love it here, like we do, / and think of it as their new home’. The process of recovery has started (‘I’m going off the ward, now I’m so much better’). But there is a sense of irony when she concludes that, in leaving hospital, ‘we give not a word of thanks, / not a single smile, / as they lead us away to be normal, / hair-dos swaying’.

Hill’s latest collection is The Hat (2008). While continuing to explore mental illness, it does so in an affirmative way: its cover photograph shows a woman in a silver party dress standing in the midst of traffic. Again, what is most remarkable is her bringing-together of humans and animals, shape-shifting (as in fairy tales or nightmares) in poems teeming with geese, pigs, frogs, and cows (‘The Day the Cows Got Out’). And, in ‘Stories about Horses’: ‘Every night the sky is full of horses. / She goes to sleep with horses round her neck’ . Men are likened, as always, to animals, whether ‘squashed beside her like a knee-length stallion’ (‘Heaven’) or with a body ‘like a partly-jewelled trout’ (‘King of Trout’). And women? She envisions rows of sunbathing women who ‘fry themselves like chops / but by the afternoon / they’ll be sobbing’ (‘Rock’). Or, rather more exotically: ‘Women are like gardens where gold snails/ are walking back and forth in the rain / and as they walk their curious long feet / are feeling for a surface to console them’ (‘Gold Snails’). There are also curiously apt similes, for example of shopping bags: ‘They huddle at her feet like ducks and geese / waiting dimly for their new home’ (‘Going Shopping’).

Selima Hill continues to be a prolific and obsessional poet, by turns whimsical, disturbing, and brilliantly unclassifiable. The best description of what her work does is still perhaps that of Deryn Rees-Jones, in the introduction to her anthology Modern Women Poets, where she praises Hill’s ‘charting [of] extreme experience’ with ‘a dazzling excess’.

'I don't want to be obtuse. My readers are my allies, and I feel a sort of conspiratorialness between us I am grateful for. A sense of being subversive, ... Of being true to whatever it is we know we want to be true to.' (quoted in Poetry Book Society Bulletin, reproduced in Bloodaxe Catalogue 1995)