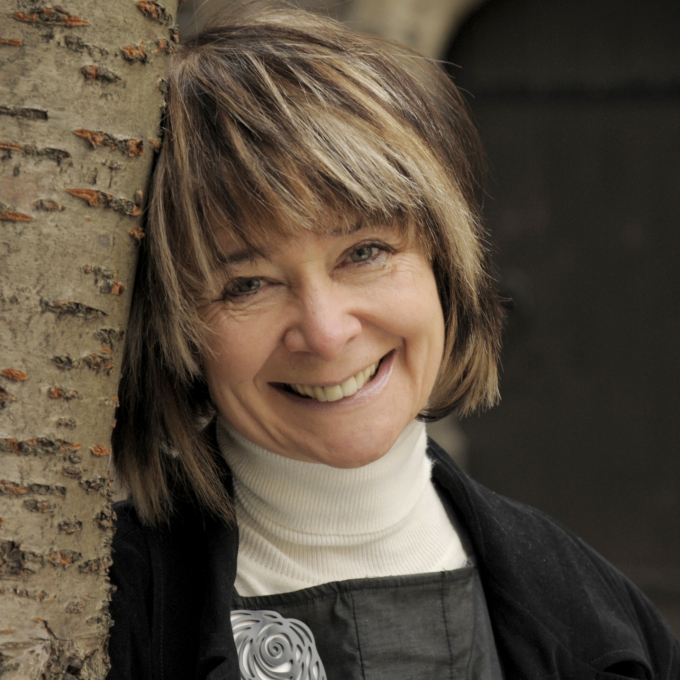 Novelist, broadcaster and critic Sarah Dunant was born in 1950, and was educated at Godolphin and Latymer School in Hammersmith, London, before reading History at Newnham College, Cambridge.

She worked as an actress and began working as a producer for BBC Radio in 1974. A former presenter of both Radio 4's 'Woman's Hour' and BBC Television's 'The Late Show' which included, until 1997, the annual broadcast of the Booker Prize for Fiction ceremony. She is a patron of the Orange Prize for Fiction and reviews for various newspapers and magazines including The Times and The Observer, and is a regular presenter of BBC Radio 3's 'Night Waves'

She is the author of numerous novels, and is the creator of private investigator Hannah Wolfe, featured in Birth Marks (1991), Fatlands (1993), winner of a Crime Writers' Association Macallan Silver Dagger for Fiction, and Under My Skin (1995). Further novels include Transgressions (1997) and Mapping the Edge (1999). Her novels, The Birth of Venus (2003), a tale of art, passion, politics and danger; In the Company of the Courtesan (2006), and Sacred Hearts (2009), are set in Renaissance Italy, and trace the lives of three women in three different historical contexts. Sacred Hearts was shortlisted for the 2010 Walter Scott Prize. Blood and Beauty (2014) is a novel about the Borgia family.

Sarah Dunant has previously been known for sinuously plotted psychological thrillers, such as Transgressions (1997) and Mapping the Edge (1999), as well as for her highly entertaining crime fiction featuring private investigator Hannah Wolfe.

More recently, however, she has established a reputation for sophisticated, sensual historical novels, with a best selling trilogy set respectively in the cities of Florence, Venice, and Ferrara during the upheavals of the Italian Renaissance and Counter Reformation. Having moved skilfully across genres, Dunant’s books nevertheless retain significant common features and interests. These include: the love lives and social roles of women; how they deal with issues and problems particular to women, as well as the male violence – and dangerous charisma -from which they are sometimes at risk. Their sexual politics are not straightforward; the women in Dunant’s fiction take chances, and have to live with the consequences.

Snowstorms in a Hot Climate (1988), her debut in the thriller mode, concerns the Latin American cocaine trade, and revolves around the disrupted friendship between world-travelling free-spirit Elly and bookish teacher Marla. When Elly unexpectedly summons her to New York, Marla is introduced to Elly’s handsome drug-dealer boyfriend and has to try to extract her friend from his clutches. Its tensely menacing atmosphere and strategic plot twists are managed even better in Dunant’s later thrillers. ‘Language and sex. Always a challenge for the translator’, reflects Elizabeth in Transgressions, home alone while translating a hard-boiled novel containing sadistic sex scenes. Meanwhile, a serial rapist is at large in her London neighbourhood and, with the police baffled, she is forced to go after the attacker herself. In Mapping the Edge, journalist Anna is abducted in Italy and forced to act out a bizarre charade impersonating a man’s dead wife. In a subplot, we follow Anna’s own investigation of a mysterious lover who had claimed to be an art dealer. Ingeniously, the two narrative threads are brought together and we find out what was, and was not, a Hitchcock-type ‘MacGuffin’.

‘Funny how time flies when you’re breaking the law’, observes private eye Hannah Wolfe in Birth Marks (1991), when she is – as usual – illegally entering a house to gather evidence. This is investigating when a young woman is found dead, and eight months pregnant, in the Thames. The trail leads to a chateau in France, a debate about the ethics of surrogate motherhood, and a concluding image of ‘morality as a rubber band, everyone rejoicing in its elasticity’. Hannah is a delightfully wisecracking creation, somewhat like Philip Marlowe and Sam Spade, and having to always juggle her working and family life. Like them, she has an inherent sense of integrity – turning down bribes, taking risks, and trying to stay ahead of the police. Hannah’s personal relationships, with her family and various on-off lovers, are fitted around the demands of her cases. And her feminism is integral to the books, which continue with similarly issues-led cases in Fatlands (1993) and Under My Skin (1995), even though her boss Frank is always telling her: ‘you’re too political for this business’.

Dunant succeeded in re-inventing herself as a historical novelist with The Birth of Venus (2003). Although the series of gruesome murders of prostitutes and clients taking place in Medici Florence, during its chaotic takeover by followers of radical preacher Savonarola, certainly recalls her crime fiction. All three of the Renaissance Italy books are well-researched, detailing the political and religious background of the times, though they contain the sharp dialogue of our contemporary exchanges. Each focuses on sensual women determined to pursue their desires, but also on the social constraints attempting to limit these, in a city ‘where the new freedoms of the mind rub shoulders with the old sins of the flesh’. The Birth of Venus features spirited young Alessandra, who becomes enamoured of a handsome fresco painter brought in to decorate the family chapel, learns to paint – and adorns her body with an erotic tattoo. Assisted by her servant confidante, she turns detective to find those responsible for the murders. Years later, by now the convent-bound nun Sister Lucrezia, she encounters the painter again and feels ‘desire like a dragon’s head lifting from slumber’.

Painters and sex are certainly prominent throughout In the Company of the Courtesan (2006). The painter is Titian and the courtesan is Fiammetta, who, in the midst of a heavy schedule of clients, finds time to pose for the iconic ‘Venus of Urbino’. She and her dwarf pimp Bucino (the narrator) flee the sack of Rome in 1527, taking up residence in Venice’s seamy underworld, selling jewels to survive, before finding wealthy patrons from its political elite. This is a terrifically sensual, pungent and lusty portrayal of a corrupt city; its high and low characters, disease-ridden alleyways and canals, exclusive circles and social mores. Fiammetta and Bucino are by turns aided and robbed by the skills of mysterious apothecary La Draga, but even she cannot find a cure for ‘Love, the only other ailment fatal to a courtesan’. Ever the frustrated voyeur, Bucino comes to an understanding of ‘the ways in which desire overwhelms God’s rules’. As an aside, Fiammetta confides that as a young girl she had been put in a convent and ‘felt as if I’d been buried alive’.

This is precisely the fate of Isabetta, the heroine of Sacred Hearts (2009), who, as it opens in Ferrara’s Santa Caterina convent during 1570, has been incarcerated there by her father following an illicit love affair. Renamed as the novice Serafina and regarded as the convent’s highly prized ‘captive songbird’, she determines to escape and rejoin her lover Jacopo. But the main character is Zuana, the sympathetic medical nun who recognizes in Serafina’s anguish some of her own feelings of 16 years earlier. Within the convent, a power struggle is going on between the pragmatic Abbess and fanatically zealous Sister Umiliana, in which visionary Sister Magdalena and Serafina become pawns. The latter’s anorexia, and self-multilation amongst other novices, become issues of vital concern. But the body is shown never to be entirely subdued by the spirit. Indeed, with particular relish, Dunant brings out the erotic energy animating the nuns’ rapt contemplation of images and visions of Christ (‘His body is everywhere … muscles running through the grain’). A great deal of tension, gossip and drama ensue, as the power struggle and Serafina’s efforts to free herself reach a climax. In her Renaissance novels, as in her earlier fiction, Sarah Dunant has achieved a fine mix of sensuality and sensibility, feminism and entertainment.

@sarahdunant @2012Sas Yes. I was struck by how utterly desirable the devil’s take on the tree was. Pandora’s box. Another woman blamed there
(14 days ago)

@sarahdunant @Rokewood Robustious to no purpose! How could God do that. I love that quote. Thank you.
(14 days ago)

@sarahdunant @NikiCandle @BBCRadio4 got it! thanks. tricky stuff language
(4 months ago)