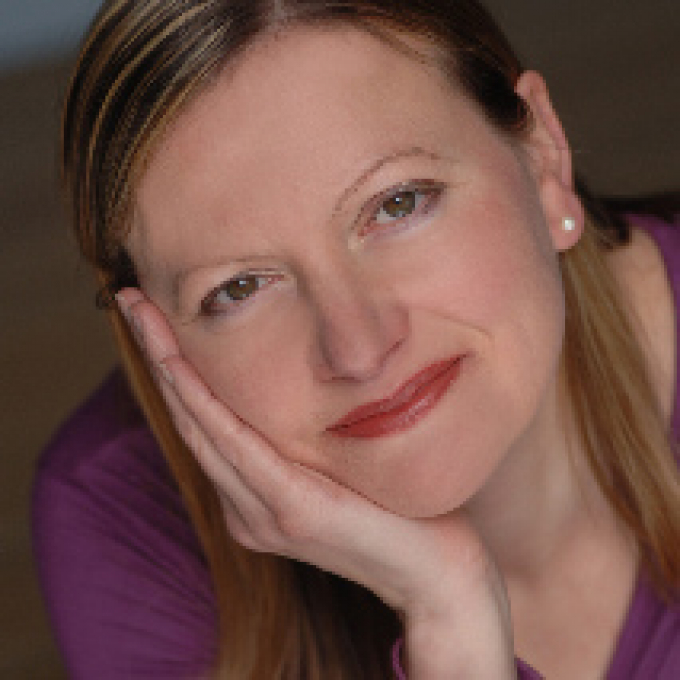 Samantha Wynne-Rhydderch was born in West Wales in 1966.

She studied classics at Cambridge University, then for an MA in Creative Writing at Cardiff University. In 2001, her first full poetry collection, Rockclimbing in Silk, was published.

She was awarded a Hawthornden Fellowship in 2005 to write a second collection. This became Not In These Shoes, published in 2008, and shortlisted for the 2009 Wales Book of the Year Award. Banjo (2012) was also shortlisted.

She has lived in Oxford, Paris and the Isles of Scilly, and now lives back in West Wales. Her pamphlet Lime & Winter was published in 2014 was published by Rack Press, and was a finalist for the Michael Marks Award.

It is perhaps unsurprising that Samantha Wynne-Rhydderch’s second collection of poems, Not in These Shoes (2008), is in part dedicated to, and takes its title from a song by, the late singer-songwriter Kirsty MacColl.

Like MacColl’s lyrics, Wynne-Rhydderch’s poetry often swings between humour, acerbic wit and heartfelt pathos, making her work, as Graham Hartill noted when reviewing the collection in Poetry Review, into ‘a complex patterning of overlays and resonances’. She is equally skilled in adopting a wide variety of voices to suit the narrative trajectory and subject matter of her poems, from the silenced passions of a cameraman in the loose sonnet ‘Matador’, to the conversational ease and resultantly shocking conclusion of vignette ‘In the Bath’. Wynne-Rhydderch’s poetry also displays a tendency towards merging the everyday with the extraordinary, something which, combined with her dramatised poetic voice and sometimes unflinchingly personal subject matter, has invited comparisons with the confessional poets, particularly Sylvia Plath. In the sequence ‘The Naming of the Storm’, for instance, the personification of a ship’s masthead recounting her life makes for a curiously fantastical yet grittily resonant, darkly comic piece, while in ‘Backless’, a ‘dress / with half the back scooped out’ sees the poet ‘swathed in fish-scale / […] tall with a train // […] raw, silked, my back silvery, // an opaque window of skin.’

Wynne-Rhydderch’s first full collection, Rockclimbing in Silk, appeared in 2001. Its title is suggestive of the fragile ‘business of being human’ which drives most of the book’s poems: exploring the unexpected challenges and demands in life that often divert us; figured in the title poem as ‘not something […] intended from the start / […] the castle’s finger / beckon[ing] jaggedly’. The book’s poems are also notable for their refreshing and recurrent focus on the human body; a rich subject matter that is often ignored in much contemporary poetry. In ‘First Aid Class’, for instance, the poet describes ‘kneel[ing] with the head gardener in my arms, / feeling the pulse in his neck the way he touches / leaves in real life’, as well as ‘handling a rib-cage / over lunch’ and experiencing ‘a sense of ornament.’ The poem ends with the poet imagining the group ‘meeting under other circumstances, / coy about our intimacy’, and the resultant understanding of ‘the way surgeons avoid the resuscitated / in The Lamb & Flag, / […] why terminology matters: / […] “episode” only a dot / on a screen.’ This distancing of ourselves from carnal frailties and the shock that accompanies their reintroduction is further explored in ‘The X-Ray Room’, where the poet is ‘dismantled in monochrome’, her ‘bones in triplicate hav[ing] nowhere to hide / [as] their fragility becomes heraldic’, ending with the doctors being described as ‘exegetes invok[ing] them in Latin.’ Similarly, in the startling imagery that makes up ‘The Electric Chair’ and ‘The Embalmer’, the brutal and the chilling respectively are lent an unusual and unsettling beauty.

Another notable feature of Wynne Rhydderch’s work is her poems’ often rapid movement and stylistic fluidity, or as one critic put it, the sensation that ‘the eyes are always on the move, through space and time, from house and land to sea.’ Aside the occasionally dramatic confessionalism of her work, then, critics who have compared Wynne-Rhydderch’s work to Sylvia Plath’s may also have been guided by their shared stylistic flair and similar subject matter, particularly both poets' abiding interest in the coast and the sea. Where poems of Plath’s such as ‘Full Fathom Five’ and ‘Finisterre’ are concerned with nature and the elemental, however, Wynne-Rhydderch’s work centres on the everyday, human interaction with the oceans: ‘Many of us dream of / escaping from it all to live by the sea’, states the narrator in ‘Ar Werth – For Sale’ (from Not in These Shoes), though ‘there is always an edge / to the land that you cannot go beyond / except by boat for a few hours a day’. Two short poems focusing on the infamous Titanic cruise ship further explore our complex relationship with the depths: the first, ‘Oyster Forks’, is a list poem that suggests the decadence and foolishness that worsened that vessel’s ill-fated voyage (‘Asparagus tongs: 400 / Champagne glasses: 1,500 / […] Passengers: 1,317 / Lifeboats: 20’); while the second, ‘Titanic’, makes for a skewed haiku that darkly mimics the sinking of the ship: ‘Cadences / before water filled the open lung / of the baby grand.’

The empathy, emotional force and rich imagery that marks Wynne-Rhydderch’s best poems, combined with her everyday vocabulary and often pithy honesty, also suggests affinities with the work of an influential contemporary poet: Susan Wicks. The sequence ‘Crayfish Tail Salsa’, for instance, tells the story of a young, overworked waitress at an island hotel from the girl’s own perspective, her rapidly decreasing weight the stark first line of each canto: ‘7 stone 3. / A juggler of irons and phones, cream teas / and keys. Not that he’d see it that way, / your boss. The best way to run a hotel is / to get one person to do three jobs. PS. It’s you.’ Just as Wicks’ early work deftly explores the world of marriage and motherhood with candid openness, then, Wynne-Rhydderch frequently addresses the complex lives of modern 20- and 30-something women: the bitter break-up of ‘Private View’ figured into ‘a game of poker / made from the buttons of a shirt you left / behind, twisted and stuck on green felt.’ ‘Brighton West Pier’, one of the strongest poems from Not in These Shoes, also reveals Wynne-Rhydderch to be an accomplished chronicler of place, especially when loss (a theme central in much of her work) makes for the poem’s crux. ‘Of course I have witnessed dereliction before’, states the poet, ‘mantelpieces three floors up, / the remnants of passion fluttering / in the torn wallpaper of virtual rooms, / the cross-section of our intimacy. / But this reclaiming by the sea of our tentative steps leaves me / precarious’. It is this balancing of tough-mindedness and lyrical intensity in writing that marries loose lines with subtle, rhythmical strictures which makes Samantha Wynne-Rhydderch’s poetry worth reading.