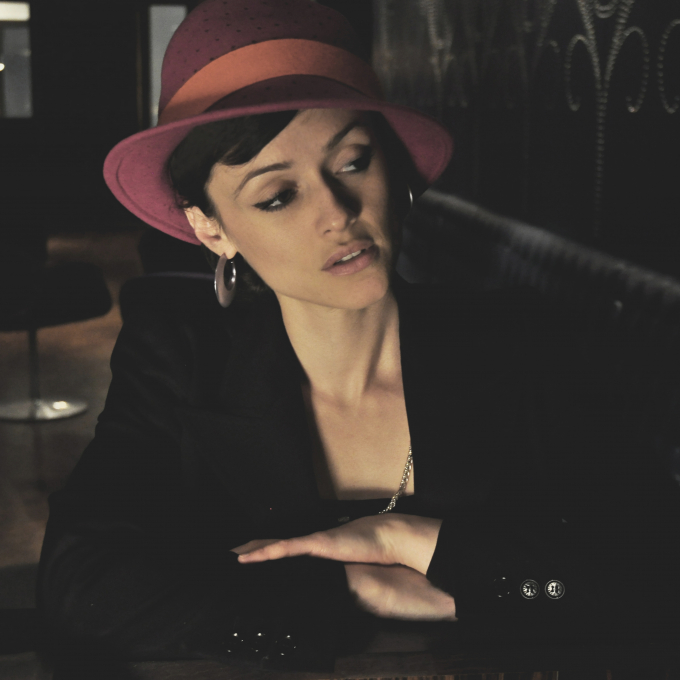 Sabrina Mahfouz is a British-Egyptian writer, performer and educator. She was raised in London and Cairo, and began her career in the civil service. Her first short play, That Boy, was performed at the Soho Theatre in 2010 and won a Westminster Prize for New Playwrights. In 2011, she was Creative in Residence at The Hospital Club. In the same year, she produced her first solo show, Dry Ice, which premiered at the Edinburgh Fringe Festival and won her the Stage Award for Acting Excellence.

Subsequent plays, which include Clean (2012) and Chef (2014), have been performed at the Fringe, the Soho Theatre, the Roundhouse and in New York, and have won numerous awards, including a Fringe First and an Off West End Award in 2018 for the children’s show Zeraffa Giraffa. Her 2015 play With A Little Bit of Luck was also adapted as a radio drama for BBC Radio 1Xtra.  Most recently, her adaptation of Malorie Blackman’s Noughts and Crosses for Pilot Theatre went on tour around the country.

Mahfouz’s poetry collection, How You Might Know Me, was published by OutSpoken Press in 2017 and named a Guardian Best Summer Read, and many of her plays have been published by Methuen. She is the editor of The Things I Would Tell You: British Muslim Women Write, which was voted a 2017 Guardian Book of the Year, and selected by Emma Watson for her feminist book club, Our Shared Shelf. Her anthology Smashing It: Working Class Artists on Life, Art and Making It Happen was published in October 2019. She also contributed an essay to the award-winning 2016 collection The Good Immigrant, edited by Nikesh Shukla.

Mahfouz founded and runs the Great Wash Workshops, which aim to help working-class writers access arts funding, and co-founded the Critics of Colour Collective, which seeks to ensure fair representation in arts criticism. She has run writing workshops in prisons, schools and charities for organisations including the Royal Court, the National Theatre and the World Economic Forum. She was elected as a Fellow of the Royal Society of Literature in 2018.

Sabrina Mahfouz’s practice extends across numerous forms – she is a poet, playwright, screenwriter, librettist and educator – but central to all of her work is the voice. As the instrument through which the socially voiceless make themselves heard, the voice is an animating force in Mahfouz’s writing, something harnessed by her vividly drawn characters for telling tales of survival in an inhospitable world.

Her poems often resemble dramatic monologues and demand to be read aloud, just as her play scripts, which often make generous use of rhyme and prose rhythms, warrant close attention as texts in themselves, straddling the line between forms. Although they are conceived and executed differently, Mahfouz’s works for both page and stage foreground character as the site where lyric and narrative modes might cohere. Despite the complaints of theorists such as Jonathan Culler about the reliance upon “the dramatic monologue as the way to align poetry with the novel”, where “to interpret the lyric is to work out what sort of person is speaking, in what circumstances and with what […] drama of attitudes” (‘Why Lyric?’, PMLA journal, Vol. 123, Jan., 2008, pp. 201-206), Mahfouz’s work happily negotiates between such modes, and often blends the sonic abstractions of the lyric with the recognisable register of everyday speech.

Take, for example, Mahfouz’s 2016 collection How You Might Know Me, which is divided into four sections and attributed to four female speakers working in the sex industry. The first and oldest of these women, Sylvia, seems at times to resist the palliative capacities of narrating her experience. In the poem ‘cognitive behavioural therapy’ she mocks talking therapies and describes them as “a load of absolute pissing shit stains” and “Oprah Winfrey bollocks”. Nonetheless, the poem later assumes the form of a common CBT activity, that of providing a “positive answer” to “a negative question that plagues me”. One such iteration reads:

Q. What if I rip my skin off and find

I’m made of cement and steel?

You are not a construction site.

In this moment the poem appears to lift off into another register altogether, replacing profanity with poetic figuration. Sylvia’s deep-rooted anxiety about her own body – its provisionality, its association with utility – is met with a ‘positive’ re-assertion of embodiment. Earlier poems in the sequence trade in parallel motifs of goods and services, and in ‘taking vouchers’ a client tries to offer Sylvia Argos vouchers as remuneration for her work. She replies:

by offering me these vouchers what you’re
basically saying is that this service, my highly skilled, let
me add, service is not as important to you, as
another life basic like, electric […]

Sylvia’s emphasis upon on her own bleeding vitality is thus framed as a way of resisting commodification, serving as a red-blooded reminder of the legitimacy of sex work as a “life basic”.

This texture of Mahfouz’s writing brings to mind the lyric poems of Warsan Shire, where tropes of blood and menstruation illustrate her poems of female corporeality whilst informing the larger semantic battle-ground of social otherness. Shire herself avows “character-driven poetry” as a mode for telling stories that would otherwise remain untold, and describes the importance of resisting the impulse to write “victims, or martyrs, or vacuous stereotypes” (interview, Africa in Words, 2013).

Mahfouz similarly avoids stereotypical renderings; whilst her characters weather the numerous traumas inflicted by legal and patriarchal inequities, they are more accurately described as survivors than martyrs, and it is their verbal flourish that brings them to life. Sylvia’s move between coarseness and candour, for example, reveals a speaker who seems to recoil from sentiment but nonetheless betrays her pathos in simple and evocative images, and such affective manoeuvres serve to flesh out Mahfouz’s constructions. The protagonist of her 2014 play, Chef, for example, uses the prop of a wet, dripping peach to describe her “philosophy”: “don’t be a poncey prick about it,/like you know things no one else could ever know/about this dear sweet little peachy poo […] I just do it plain and simple”. For this character, an haute-cuisine chef who ends up in prison, where she runs the inmates’ kitchen, this poetics of peaches is evident. As a symbol of the small but wholly formed, and of the simple rather than adorned, the peach exemplifies this character’s no-nonsense world view, a principle of optimism she maintains in the face of violent and turbulent circumstances.

If Mahfouz is a consummate writer of interior spaces, then, from the kitchen of a prison to the garage where Sylvia meets one of her clients, the city outside nonetheless also features palpably. Mahfouz is unmistakably a London writer, and in her work the capital is not merely a timeless backdrop or a generic shorthand for the urban but a place with its own challenges and rich cultural traditions. Mahfouz’s 2015 play With a Little Bit of Luck, for example, offers a heady portrait of the early 2000s UK Garage scene, and she is currently working on the script for a screen biopic of east London MC Wiley.

Given the affinities with her own spoken-word works, Mahfouz’s engagement with the character-driven forms of hip-hop genres is unsurprising, but it also bespeaks a personal and political desire to set the record straight. As she states in an interview about With a Little Bit of Luck, “I was frustrated with the way garage was constantly depicted ‘ironically’ […] If we don’t write our history, our reality, then others will do it for us and we won’t like what we see” (BBC Radio 1Xtra Interview, March 2018). Mahfouz has turned this documentary impulse toward a range of topics too extensive to list here, from women in football to working-class adolescence to migrant experience. In accounting for these numerous ways of life in contemporary Britain she conjures vivid worlds and offers portraits that are both celebratory and unflinching. In her introduction to the edited collection The Things I Would Tell You: British Muslim Women Write, Mahfouz writes that, given the subject matter, “it was vitally important to me that the reader was offered a range of narratives and writing styles”. Her own work shows that such variety is not only the remit of the anthology but the singular, politically engaged artist herself, a writer for whom the monologue is, after all, a mode for starting dialogues.

@SabrinaMahfouz So glad I have this book today. To read 3000 years of Arab women writing about sex and love and lust. 👏to… https://t.co/n4glck4Bhv
(7 days ago)

@SabrinaMahfouz My bedazzling book agent @IAmBeckish has launched her own agency @lewinsohnlit ☄️ She has ignited more careers than… https://t.co/S20QoOW7XL
(10 days ago)

@SabrinaMahfouz RT @ukblm: Today is #StephenLawrenceDay. It's been 28 years since Stephen's life was cut short by a racist attack. His family had to campa…
(15 days ago)

@SabrinaMahfouz @michskie1 Thanks - I think that is the most perfect response :) x
(1 months ago)