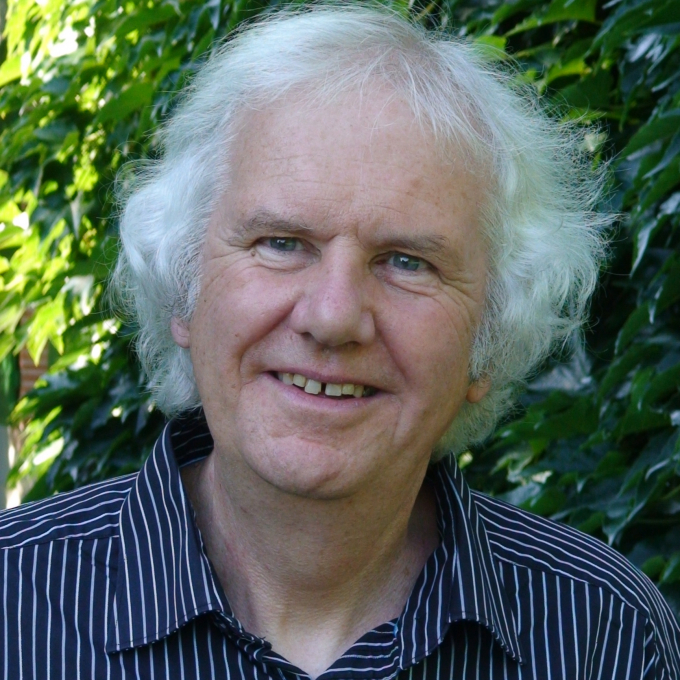 Ron Butlin was born in 1949 in Edinburgh, Scotland and was educated at the University of Edinburgh.

He was Writer in Residence at the University of Edinburgh (1982 and 1985), the Midlothian region (1989-90) and the Craigmillar Literacy Trust (1997-8). He was also appointed Scottish/Canadian Exchange Writing Fellow at the University of New Brunswick (1984-5), Writing Fellow at Stirling University (1993) and Novelist in Residence at the University of St Andrews (1998-9).His writings include poetry, libretti, plays and journalism and he is the author of three novels: The Sound of My Voice (1987, reissued 2002); Night Visits (1997); and Belonging (2006). The French translation of The Sound of My Voice was awarded the 2004 Prix Milles Pages and the 2005 Prix Lucioles, both for Best Foreign Novel. He was awarded a Scottish Arts Council Book Award for his first collection of stories, The Tilting Room: stories (1983), and for Ragtime in Unfamiliar Bars (1985), a collection of poetry. Vivaldi and the Number 3 (2004), is a collection of tales about great composers, written from unusual and entertaining angles. No More Angels (2007) is his latest short story collection.

His plays include The Music Box and We've Been Had and he has written several libretti, including Good Angel, Bad Angel and The Perfect Woman.

A freelance journalist for the Sunday Herald, Ron Butlin lives in Edinburgh with his wife, the writer Regi Claire, and their dog. His latest collections of poetry are The Magicians of Scotland (2015) and Here Come the Trolls (2015), a collection of verse for children.

From 2008 to 2014 he was Edinburgh Makar and in 2009, made the first Honorary Writing Fellow, along with Ian Rankin, at Edinburgh University. He became a Fellow of the Royal Literary Fund in 2010.

Ron Butlin’s reputation as poet, novelist and short story writer was consolidated early in his career by three books from independent Scottish publishers: Creatures Tamed by Cruelty: poems in English and Scots and Translations (1979); The Sound of my Voice (1987); and The Tilting Room: stories (1983).

Butlin has been acknowledged as one of the most engaging and diversely talented writers of his generation for many years in his native Scotland. But it is only in recent years that his work has been recognized elsewhere in the UK, even though his work is known, in translation, in 10 languages.  The subtitle of Creatures Tamed by Cruelty (above) indicates broad interests. In fact his reach is even wider than this: he is today known as a dramatist, opera librettist, radio scriptwriter and sometime journalist. But it is as an equally distinguished poet, novelist and short story writer that he is best known.

First and foremost Ron Butlin is a poet. Without a Backward Glance: New and Selected Poems (2005), shows him as a poet possessing a sure and subtle rhythmic authority. His poems have at times been rather overlooked in the competitive world of contemporary verse.  But they always reward a careful reading. The poem ‘St Cloud in the Spring’ is an example:

'Of the many versions of spring this one is mine
for the present: a suddenly coloured-in garden
beneath an imperfect blue sky, where inaccurate
songbirds keep changing their tune
as they fly round the sun …
I lie and I wait
for my past to catch up – and it doesn’t. I integrate
nothing, and nothing’s omitted, and nothing’s to come.
Let’s welcome the droughts of November, the snowfalls in June!'

Lines which point us towards characteristics of the work: the presentation of specific sensations viewed from an unexpected angle, an inventive exploitation of the voice in the poem, and an ambition to express personal feeling in an original way. In fact, not surprisingly, that apparent simple lyric voice is made of the art that hides art. His sensibility is open to emotion and the rhythm here is a fluid vehicle at the service of the feeling. Butlin’s rhythms are individual and confident; if read aright, they quietly grasp and hold our attention for the duration of the poem. The long poem ‘Ragtime in Unfamiliar Bars’ – one of a number of poems reflecting Butlin’s love of music – is a carefully wrought examination of keyboard playing and is also, incidentally, a metaphor for the rhythms and insights of Butlin’s own work:

‘To modulate:all keys and accidentals should relate
in your imagination before you play,so take your time.’

'So do not ask me the colour of my mother’s eyes:
for nowadays all I know for certain is
that while the exiled Charlemagne walks to and fro,
his courtiers amuse themselves with electricity,
making the dead jerk and the living scream
with laughter.'

The ability of Butlin’s poems to hold our attention is a quality we find equally in his prose; although it is noticeable that his fiction is generally darker in both tone and subject. His short stories, first collected in The Tilting Room (1983), have a pared-down quality and a tone of voice which, disconcertingly, captivate the reader and lead us into strange and memorable corners of existence as in ‘Scenes from an Opera’ which begins:

'There is a flight of stairs leading up to the next floor. I live under these stairs. I crouch to cook and lie full-length to sleep. I have been living here for two years. I bother nobody and nobody bothers me – some of the friendlier residents even bid me good-day as they pass. One morning I found a mop and pail beside me when I woke-up.'  An opening which cannot be ignored. Many of these stories are 10 pages long or even shorter, yet they contain multitudes. A further book, No More Angels, was published in 2007 and is equally varied and, by turns, challenging and consoling.

Butlin’s first novel, however, The Sound of My Voice (1987), is clearly his most influential prose book and has been important to many of the present generation of brilliantly talented Scottish novelists. The book has been acknowledged by writers as diverse as Alan Warner, Ian Rankin and, most memorably, by Irvine Welsh who has called it ‘One of the greatest pieces of fiction to come out of Britain in the ‘80s’. The story leads us through the days of an alcoholic businessman suffering a nervous breakdown. The narrative pushes forward at a pace as desperate as the state of mind of this man ‘thirty-four years old and already two thirds destroyed’ as he attempts to hold back an apparently ever rising muddy tide of depression and anxiety with doses of brandy. The novel is short and told as if from the inside while keeping the reader at a distance from the unnamed protagonist by the device of addressing him as 'You' almost throughout. The book portrays a sense of a waking nightmare in which the unreflective victim is cut off from any self-awareness or hope of freedom from a relentless daily pattern of office and home life and drunken evasions. But the bleakness of the subject is told with a verve and liveliness which belies the subject and gives real pleasure.

Butlin’s love of music is found most clearly in the prose vignettes of Vivaldi and the Number 3 (2004); a book which contains an almost unclassifiable selection of short prose pieces. Butlin takes the lives of composers and philosophers and creates short fantasies around them and their work. The titles indicate something of the flavour: ‘Vivaldi, the jumping cardinal, God and the number 3’; or ‘How Bach won the battle against modern technology’.

If anything, Butlin’s prose is better known today than his poems, which is perhaps the inevitable fate of a multi-faceted talent in a world which is happier to designate writers to one area of literature only. But his poems will always find readers who care for the primacy of the imagination in defining our humanity:

'All histories are histories of desire, they tell me
how my life begins and ends: a stretch of water,
a stone a child sends skimming
to the other side.'

2015
The Magicians of Scotland
2015
Here Come the Trolls!
2014
Ghost Moon
2012
The Magicians of Edinburgh
2007
No More Angels
2006
Belonging
2005
Without a Backward Glance: New and Selected poems
2004
Vivaldi and the Number 3
2002
Nuesta Porción de Buena Suerte/Selected Poems
1998
When We Jump, We Jump High! Writing by School Children from Craigmillar
1997
Night Visits
1997
Mauritian Voices: New Writing in English
1995
Shouting it Out: Stories from Contemporary Scotland
1995
Histories of Desire
1991
First Lines: Writing in Midlothian
1987
The Sound of My Voice
1985
Ragtime in Unfamiliar Bars
1983
The Tilting Room: stories
1982
The Exquisite Instrument: Imitations from the Chinese
1979
Creatures Tamed by Cruelty: Poems in English and Scots and Translations
1976
Stretto
1974
The Wonnerfuu Warld o John Milton

@RonButlinMakar RT @NHSMillion: This has been verified as accurate - the truth about what happens when Boris Johnson visits your hospital. Please RT to ma…
(5 days ago)

@RonButlinMakar RT @campbellclaret: Do poor NHS staff have any choice in whether they are used in johnson visits where he pretends to be a prime minister t…
(5 days ago)

@RonButlinMakar RT @NicolaSturgeon: Let’s be clear: if Tories are threatening to withhold public investment from constituencies as a way of keeping MPs in…
(6 days ago)