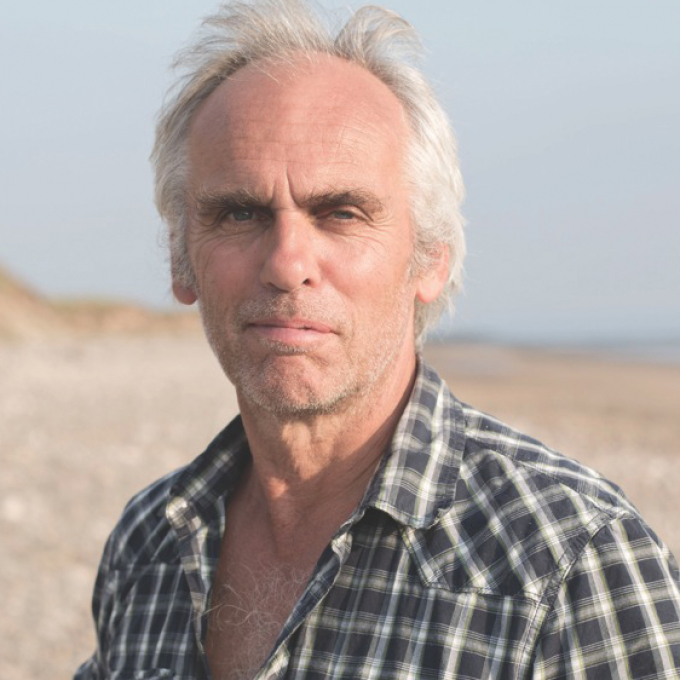 Robert Minhinnick was born in 1952 in Neath, South Wales.

He grew up near Bridgend and studied at the universities of Aberystwyth and Cardiff, then after working in an environmental field, co-founded Friends of the Earth (Cymru) and became the organisation’s joint co-ordinator for some years. He is advisor to the charity, 'Sustainable Wales' and edits the international quarterly, Poetry Wales.

As well as being an active environmental campaigner, he is an essayist and poet, having published two collections of essays: Watching the Fire Eater (1992), winner of the 1993 Arts Council of Wales Book of the Year Award; and Badlands (1996), essays about post-communist Albania, California and the state of Wales and England. He has also edited Green Agenda: essays on the environment of Wales (1994). His book, To Babel and Back, was published in 2005 and won the 2006 Wales Book of the Year Award.

Robert Minhinnick lives in Porthcawl, South Wales. His debut novel, Sea Holly, was published in 2007, and shortlisted for the 2008 Ondaatje Prize.

Robert Minhinnick has won the Forward Poetry Prize (Best Single Poem) twice, and in 2004 was shortlisted with ‘The Castaway’.

Like much of his work, its lyrical narrative is dense with imagery of the natural world, describing a dream-like vision of the local beach as ‘a looted exchequer’, and ‘the sea’s library / in darkness, in its greatest darkness, every book of it / and every page fused to blackness, every word and signature / translated into the language of the dark’. Its conclusion is spoken by a drowning man taking the sea as a lover (‘What a night we have together rolling in one another’s arms’) and being swept up in a ‘high pressure August swell lifting me light / as the whipweed till each wave is a fog of dirty gold’.

As this might also obliquely suggest, Minhinnick has been a longstanding campaigner for the environment, having helped set up Friends of the Earth Cymru. He is also a commentator on a range of ecological and cultural issues, with the perspectives of a world traveller, notably in his essay collections Badlands (1996) and To Babel and Back (2005). Editor of Poetry Wales since 1997, he has recently prepared an anthology drawn from the magazine over the past 40 years. More controversially for some Welsh language purists, his ‘Facing Text’ anthology, The Adulterer’s Tongue: An Anthology of Welsh Poetry in Translation (2003), includes his English versions (or, as he prefers to call them, ‘re-stylings’) of poems in Welsh by Emyr Lewis, Iwan Llwyd, and Elin ap Hywel.

Minhinnick’s poetry has developed steadily over the years, and in some ways he is arguably closer to Edward Thomas than R.S. Thomas. He can be regarded as a latter-day Romantic, happiest in the outdoors describing what he sees on the wing or encounters on the road. His poems typically traverse the places of his childhood, the shorelines of his native Porthcawl in South Wales; they can describe the sultry sensuality of a beach bar in Rio (in ‘Hey Fatman’), a frozen Cree Indian reservation during a Canadian winter, or pay eloquent tribute to a writer and landscape in ‘Jack Kerouac Park’: ‘On the bridges where you learned to fly / On scrawny wings above the Merrimac’. Another element of his essential romanticism is the re-working of early formative experiences in and around his family’s village, especially in his early books, Native Ground (1979) and Life Sentences (1983). They have a number of poems about his grandfather, who is recalled working in the garden, and ‘Bent, it seemed, perpetually towards the earth’, significantly teaching him ‘patience and slow lessons’. However, he is no sentimental elegist of his early years; as a later poem insists, ‘Memory is the inheritance / That is always in dispute. It’s also the slipperiest deal / We get’ (‘2, Windsor Road’). He can be bitter, as in the sequence ‘The Death of Johnny Owen’, hallucinatory in describing strange mental states in ‘The Hothouse’, or explicitly linking recent events with archaeology and history, as in ‘Twenty-five Laments for Iraq’, the ‘Boys of Watts and Jones County’ building cookfires ‘on the ramparts of Ur’.

A perceived change in his work came about with The Looters (1989), and Hey Fatman (1994), alternating between Wales and abroad, the past and the present, but with a more political view and a greatly enhanced store of imagery. The Looters, for example, opens by indicting the 1988 Australian Bicentennial, observing miners in a bar trying ‘to drink the uranium / Out of their bellies’. It goes on to describe the dire condition of Aboriginals, people who ‘once walked / Down the spine of a continent, / Discovering the one right name/  For the lizard, the right name for the tree, / Laying the highway with their songs’. The US starts to loom large, often its popular culture (with many references to rock bands and singers scattered throughout his work) and commerce, glimpsing ‘ahead a horizon / of refineries, the neon / signatures of Miller’s Lite’. In other poems he returns to Wales, as in the title work depicting his locality immobilized by bad winter weather, and recalling ‘the birth of 1966’ during a boy’s first drug trip (‘A Footnote to the History of Bridgend’). ‘Botany’ beautifully recalls a magpie’s flight, ‘blurred like a dice / That rolls unreachably away’, exploring the countryside with a companion, and ‘The orchid that grows in the place where you lay’.

Minhinnick has described the essays in Badlands as not being Travel Writing as such; rather, it is ‘about Wales viewed from other, strange parts of the world like Saskatchewan, New York, San Francisco and Albania – and parts of England. It’s a book about people and predicaments’. The overall theme is environmentalism, most overtly in his travels to nuclear reprocessing sites and windfarms in Britain, where he muses about what Shelley and Wordsworth ‘would have said about windfarms’.  ‘One for Columbus’ strikes a more humorously self-deprecating note, as he enters a Poetry Slam in New York (‘poetry as bloodsport … a tiny, teeming universe, bizarre as a rainforest’). He also travels to eco-conscious San Francisco, and in ‘The Jukebox in Uranium City’ goes across the Prairies by Greyhound bus. Anecdotes and memory play their part, and there are some sardonic comparisons between foreign cultures and Wales. Perhaps the most memorable essays are about journeys from Wales to Albania. ‘Letters from Illyria’ records the fraught experience of driving an Aid lorry, encountering misunderstandings, and the local drink, raki (‘the oil in the machine’). ‘Ryan’s Republika’ is about a return trip to the country for a World Cup qualifying game, getting up close to the Welsh team and officials, ending with the disappointed fans leaving their dragon flag ‘pinned to a wall dark with totalitarian smoke’. Sport and its place in Welsh culture is a sub-theme of the book, despite the fact that he is more interested in the characters than the games.

His most recent poetry volume, After the Hurricane (2002), also reflects on his travels, particularly in North America and Canada. As always, he is fascinated by the land, birds, animals, flora and fauna, as well as the idiosyncrasies of the culture. In ‘A Natural History of Saskatchewan’, imagistic vignettes show moose, porcupines, wolves, ‘a constellation’ of bears, and the oil industry’s nodding donkeys. ‘Roadkill Blues’ is a lengthy diary-like work that captures the Canadian winter and spring, when ‘the cold is coming / Like a wolverine out of the north’. As the spring thaw brings out prairie crocuses, (‘blotting paper blue’), 'coyotes start their chant’ (‘Coyotes’). He returns to home territory with the light-hearted sequences ‘A Welshman’s Flora’, (‘Carnation’: ‘I stayed in Richard Burton’s buttonhole/  A whole week’) and ‘The Porthcawl Preludes’. Minhinnick once commented on his wish to find ‘the transforming image that provides even commonplace things with another dimension’. His recent poetry prizes have been a deserved recognition of his achievement in developing a poetic vision that brings together ecological, cultural, and humane values.