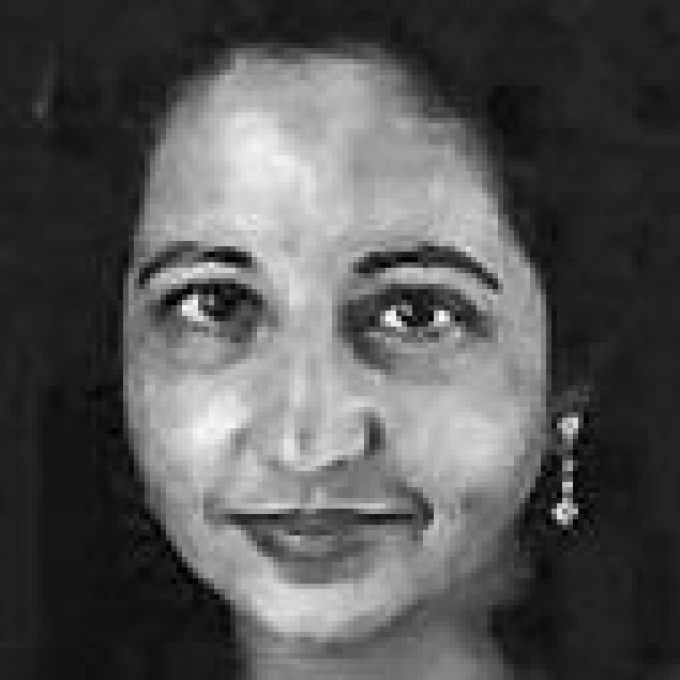 Ravinder Randhawa was born in India and grew up in Warwickshire.

In 1984 she founded the Asian Women Writers Collective, which published two major collections: Right of Way (1989), and Flaming Spirit (1994). She is a frequent speaker at universities in the United Kingdom and abroad, is a member of PEN International and was the Royal Literary Fund Fellow at Tonybee Hall. She is currently Fellow at St. Mary's College, University of Surrey.

She is the author of the acclaimed novel, A Wicked Old Woman (1987),  the teenage novel Hari-jan (1992), and the highly praised The Coral Strand (2001). She has contributed short stories to many anthologies in the UK, USA and Europe, as well as non-fiction articles.

It is perhaps difficult to believe, given the high profile enjoyed today by South Asian women’s writing in the UK, but Randhawa’s debut was also one of the first to be published by a British Asian writer in the postwar period. As Bruce King notes:

'As the past emerges, a portrait of a group women (family, relatives, friends, enemies, acquaintances) builds along with their troubled relationships with men who leave the women with wounds when they depart for younger women or fame, and take the fruits of what was joint labour … Randhawa asks if people can live without love and finds love through collective responsibility in action.'

This said, and as King himself acknowledges, the novel operates beyond the parameters of the polemic or didactic, and is a linguistically and structurally playful text that seems to foreground itself as artwork. The novel’s protagonist is Kulwant Singh, or Kuli (a variant spelling of coolie), and she lives behind the disguise of an old woman. ‘Stick-leg-shuffle-leg-shuffle’ is the refrain that recurs throughout the book. This dominant metaphor of disguise, masquerade, the performance of identity has a rich pedigree in British Asian fiction of the late 1980s and early 1990s: the protagonists of Hanif Kureishi’s The Buddha of Suburbia and Salman Rushdie’s The Satanic Verses are all, significantly, actors, voice over artists, or performers of some sort. However, as Susheila Nasta has noted:

'Whereas Kureishi’s Karim … celebrates the fluidity of his multiple identities, and wears difference like a costume which he can take on and off whenever it suits him, Randhawa’s character Kulwant is more sceptical from the beginning about the ultimate effects of such performances.'

It is perhaps no surprise then that Karim’s retreat from politics into acting at the end of The Buddha of Suburbia is in stark contrast to the final short paragraph of A Wicked Old Woman: ‘The Director shouts: ACTION’.

In her third and most recent novel, The Coral Strand (2001), Randhawa moves between pre-Independence Bombay and contemporary London. The novel tells the story of three striking women – Sita/Ferret, Champa, and Emily. Emily is a London factory worker who ends up relocating to India in order live the life of a memsahib; Champa is the mistress to Emily's husband; Sita/Ferret, a runaway girl in possession of the priceless jewels which link all three women. As Alex Tickell notes, the novel’s intricate jewellery motifs are symbolic of lost inheritance, and a ‘comment on the paradoxical nature of postcolonial dislocation. Tracing the misappropriation and final restitution of ‘family jewels’ from India, Randhawa creates a layered fable which combines Sita/Ferret’s growth to self-awareness with recognition of the material and psychological costs of India’s colonial past’.

Like A Wicked Old Woman, The Coral Strand shifts seamlessly between places and states of mind, physical settings and stream of consciousness, between poetic prose and documentary realism. The book begins in London, one early morning in January 1997. Told from the perspective of Sita/Ferret, we shift from her interior thoughts to the world outside as she looks out her misted attic room window:

'Freezing glass against her palm! Darkness outside. Sita/Ferret has never complained about the English winter, neither has she admitted to the heresy of enjoying the bitter-sweetness of its grey embrace. In the block of flats across the road a few windows are also lit, early risers providing her with a distant sense of camaraderie. She wonders if, like her, they have a special reason for their dawn start this morning, or if this is their habitual time. Are they part of that secret army whose work start in the dark, lonely hours?'

Depictions of a grey, dark and cold England are commonplace in black and British Asian fiction: markers of alienation and frigid cultural relations. What complicates this received narrative is Sita/Ferret’s mixed and contradictory feelings and impressions about the world around her. The glass repels her hand, but the grey embraces her; she is both distant from the early risers across the street, but shares a camaraderie with them. Sita/Ferret has risen early in order to make a journey, her ‘annual pilgrimmage’ across London to the suburban house of Emily and Champa, the house that Sita/Ferret once abandoned. As she journeys through the city, her heavy clothes begin to seem like Kuli’s: a disguise, or like the changing surfaces of the city itself:

'The external face of a place is forever changing. Old buildings are torn down, new ones go up in their place, shops change names and styles, businesses rise and fall, people come and go. But the arteries of the town, the roads and streets, rarely alter. Sita/Ferret doesn’t need to re-orientate herself; she’s never forgotten.'

Randhawa’s cities, like her characters, are transitory sites of reinvention and constant renewal. Her vision is informed by the experiences and aesthetics of the migrant, and it seems significant that only streets, the conduits of travel, remain the same. However, as with A Wicked Old Woman, journeying is not an end in itself, and as Sita/Ferret presses forward, her mind drifts back, recalling the personal, political and moral obligations that motivate her journey.