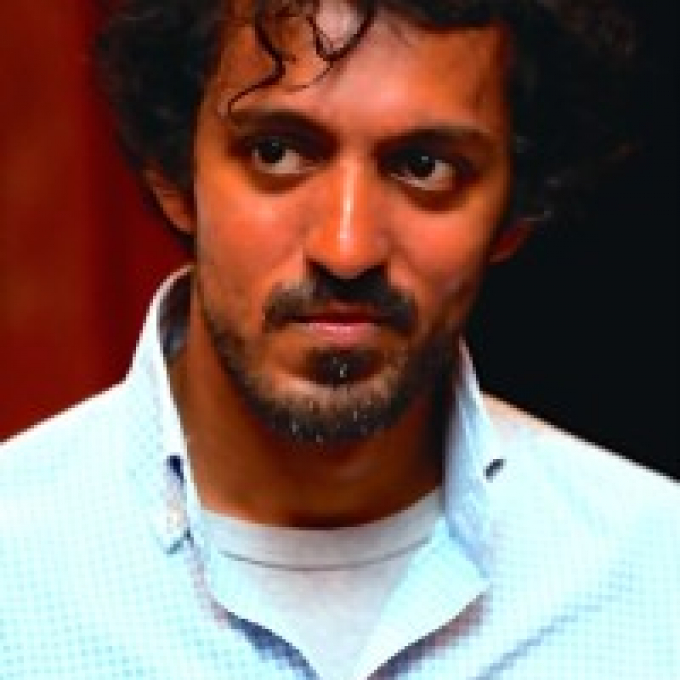 Rajeev Balasubramanyam was born in 1974 in Lancashire, and his family comes from Southern India.

He is a graduate of Oxford and Cambridge Universities. He has had short stories published in a variety of anthologies, including New Writing 12. His first novel, set in India, with a 17-year-old unnamed narrator, is entitled In Beautiful Disguises (2000). It won a Betty Trask Award in 1999. His second novel, The Dreamer (2010), is based on one of his short stories, originally shortlisted for the 1999 Ian St James Award. His third novel, Starstruck (2014), consists of ten narratives in which the main character has an encounter with a famous person. It was published by the experimental publishing initiative Fiktion.

Rajeev Balasubramanyam has said that he set his debut novel in India not as a way of connecting with his Indian roots, but as a way of detaching himself from his own complex ideological relationship towards Britain and race.

In a piece called ‘Living with the Whites’, the Lancashire born and raised writer says: "It was to liberate my imagination, to impose subjectivity on circumstances, as my heroine does." However, he notes: "like her, I was to find that fantasy can only be a temporary refuge."

In Beautiful Disguises (2000) tells the story of an unnamed young girl from a south Indian village who has a tenuous grip on reality:

"I had developed problems distinguishing between fantasy and reality, or rather, I could make the distinction, but somehow I would invert the significance. I had a habit of trapping myself in that place that lies between dreams and consciousness, and I would stay there until someone pulled me back."

Like so many others, she finds solace and imaginative escape in films, and is a regular visitor to the local Magick Movie House. In particular she identifies with Audrey Hepburn, particularly as Holly Golightly in Breakfast at Tiffany’s. Although she claims becoming an actress is her true calling, it seems that it is becoming that particular actress, or even that particular character, which actually appeals most. When her parents arrange a potential marriage with an unpleasant local man, she takes fright and, in a rare moment of decisiveness, bluntly refuses. Escaping her violent alcoholic father, she runs away to the city and begins a new life, working as a maid for a rich Kashmiri gentleman and his overbearing French wife.

In Beautiful Disguises is a loss-of-innocence story, a coming-of-age tale in the classic mould, but with some significant variations. The way in which the narrator overcomes her trials is not straightforward, for one thing. Convincing herself that she is an actress in training is her way of coping with the hard life of a maid, yet she actually does much less work than any of the other staff, thanks to the paternal ministrations of her employer, Mr. Aziz. She’s rarely reprimanded, enjoys trips into the city and the zoo, and develops a liking for croissants and champagne. And where we might expect a character to take advantage of opportunities when they emerge, the narrator’s confused sense of what is achievable, and what is preferable, is demonstrated when she is offered a better job looking after animals at the zoo. "Feeding on croissants was infinitely preferable to feeding crocodiles," she reasons at the time, preferring to keep her acting dreams alive. Later, she rejects the zookeeper’s reasoning that "Feeding crocodiles was better than feeding Mrs Marceau".

Coming-of-age usually also involves grappling with love, sex, or both. In this case, the narrator falls for the continental charms of Mrs Marceau’s Oxford-educated son Armand, who – unbelievably – seems to like her too. But is this a true, classless romance or the road to ruin? Even while we see Armand dangerously overstepping the boundaries of behaviour and convention, he’s described in non-threatening terms: "His eyes were full of kindness … Now everything was all right." Balasubramanyam makes it difficult to tell how reliable the narrator is, and the resolution of this particular liaison is far from conclusive.

The central discovery which the girl makes during her time in the city is her realisation that, just as she sees herself as a film star disguised as a maid, everyone else assumes a disguise of their own:

"The problem was we’d all been dumped inside the wrong realities. Maybe it had something to do with past lives. I couldn’t be certain. But one thing I was sure of – disguises always slip off. It’s just a matter of time."

The narrator comes closer to understanding through the story of Arjuna from the Hindu epic, Mahabharata. Despite having disguised himself as a female dancer (and enjoyed it), Arjuna finally accepted that his true calling was fighting, and when the chips were down he threw off the disguise and took up arms. "The point of the story," says the narrator, "was that a warrior is always a warrior, even when he’s disguised as a woman, or a servant. And a film star is always a star, even when she’s a maid. The problem was […] I had been born a girl, and not a star." She acknowledges that Arjuna’s returning to battle "had something to do with duty", but it’s a while before she applies this to her own situation.

The "temporary refuge" Balasubramanyam found by setting this book in India was something he attempted to return from in a second book. His efforts to write a novel addressing his own problematic relationship to England have so far led to several stalled projects. If In Beautiful Disguises is indeed only a fantasy, it will be worth keeping an eye on this writer to see what he produces next.