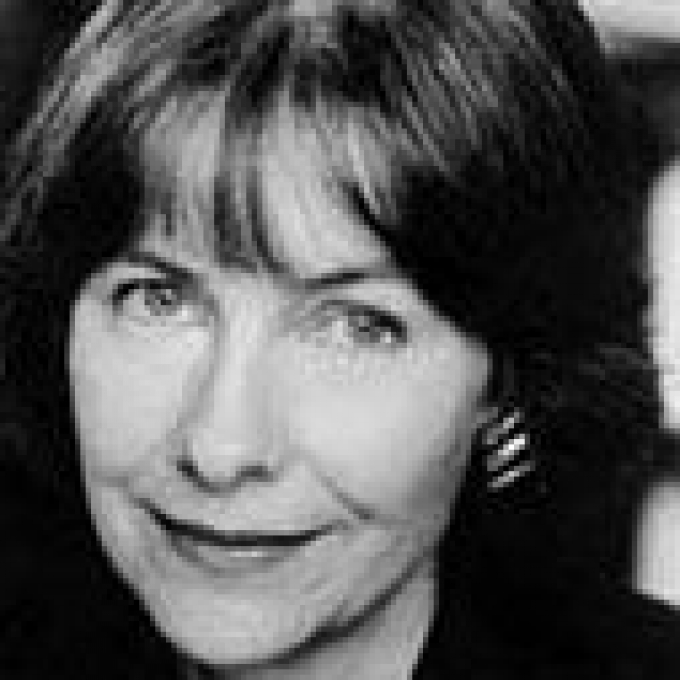 Posy Simmonds was born in 1945 and grew up in Berkshire.

She studied Graphic Design at the Central School of Art in London.  In 1969, she started her first daily cartoon feature 'Bear' in The Sun, and also contributed to a variety of magazines and journals, including The Times and Cosmopolitan.

She is renowned for her light, witty satire, and social observation. In 1972, she moved to The Guardian as illustrator, where she created a popular cartoon strip about middle-class couple, George and Wendy Weber.  During this time she also produced graphic novels, including True Love (1981), and Gemma Bovery (1999), an adult reworking of Flaubert's Madame Bovary. She was named 'Cartoonist of the Year' in 1980 and 1981.

In 1987, she began to write and illustrate children's books, and created Lulu and the Flying Babies (1988) and the very popular Fred (1987), the film version of which was nominated for an Oscar.

Her most recent books are Baker Cat (2004), for children, and Literary Life (2003). Tamara Drewe, a book inspired by Thomas Hardy's Far From The Madding Crowd, was published in 2007.

The cover of Tamara Drewe (2007), Posy Simmonds’ latest graphic novel, shows its glamorous heroine framed against a rural backdrop – within which we can see sheep mating.

Accordingly, a good deal of amorous pursuit takes place throughout its course, mostly involving the energetic Tamara. Like its predecessor, Gemma Bovery (1999), this too is a deliciously satirical tragi-comic tale (which originally appeared as a long-running strip cartoon in The Guardian) of tangled relationships and deceptions, literary lives and commentary on our current social mores. Both works are based on classic novels (Far from the Madding Crowd and Madame Bovary respectively), and their pleasures are highly literary. Equally, they have many subtle insights into the perennial dilemmas of human nature, artistic pretensions and emotional longings, with an appreciation of their social contexts.

Posy Simmonds’ art of satire has greatly developed in sophistication since the late 1960s. Her first creation was the ‘Bear’ cartoon in The Sun (many anthropomorphic and even risqué animals feature in her work), and from 1977 to the present day her work has appeared mostly in The Guardian and Observer newspapers. Her column, Mrs Weber’s Diary, collected in book form in 1979, pokes fun at readers’ own liberal values during the era of the Mrs Thatcher government. Its numerous pretentious characters clash with long-suffering polytechnic lecturer George Weber and his wife Wendy, who find their efforts to live ethically undermined by the actions and attitudes of neighbours, colleagues, students – and their rebellious children.

Simmonds’ books for children allowed her to keep an eye on the foibles of the middle-classes while also giving her rich vein of fantasy full rein. They tend to operate on the Alice in Wonderland principle, with troubled children falling asleep and finding themselves in a dream realm of talking clothed animals. This is the scenario of Fred (1987), as a brother and sister are in mourning for the death of their much-loved cat. They’re woken up by next door’s moggy to join a neighbourhood wake for ‘famous Fred’ – discovering his secret life as a pop singer – and come to terms with his loss. Simmonds’ reference to Lewis Carroll is more explicit in Lulu and the Chocolate Wedding (1990). Imaginative but naughty little girl Lulu and her baby brother are in disgrace, having been sick by overeating during preparations for their aunt’s wedding. Lulu’s chocolate-fuelled nightmare finds her shrinking down to enter the lair of gangster mice to rescue The Sugar Bride and Groom, scaling an icy wedding cake and performing their ceremony: ‘D’you promise to be very sweet, forever and ever?’ Baker Cat (2004) is a charming tale of an over-worked cat, who eventually forces out the harsh owners of a bakery with the assistance of inventive if voracious mice.

In Literary Life (2003), her targets share the trials and tribulations of the world of books, as observed in authors, publishers, booksellers and readers. These cartoons and strips typically show women writers juggling the demands of work and family, or typing their frustrations into laptops. Male writers test their egos at readings and book-signings and are forever flirting. The cover drawing, for instance, shows a middle-aged man with his arm almost around a young waitress. Looking inside, we find the caption: ‘You know, you’re really beautiful … Have you ever thought about being a novelist?’ And we see its context, the launch of a book titled Love Rats. By contrast, Jane Austen finds herself under modern media pressures: ‘You’re a celebrity … get yourself over here!’ And the Harry Potter craze is sent up in a drawing of a family’s fixed smiles as a young girl explains the plot of the latest book. Two graphic short stories conclude the collection. ‘Murder at Matebele Mansions’ is a spoof murder mystery, while ‘Cinderella’ sees an elderly couple restored to youth by their fairy god-daughter (who looks rather like Lulu) so they can attend a party given by the awful owners of their care home.

True Love (1981) can be regarded as Simmonds’ first graphic novel, but her masterpiece is Gemma Bovery. This playfully updates Flaubert’s tragic tale of adulterous love to the British community in the Normandy village of Bailleville, as told in flashback by the local baker Joubert. He is the anti-hero, a jealous voyeur who has stolen Gemma’s diaries, finding out about her previous affair with a caddish restaurant critic and seeking to sabotage her love for handsome student Herve. Yet such a plot summary can’t do justice to its multi-layered nature and wickedly funny portraits of the Brits in France. These include Gemma’s ghastly neighbours Wizzy Rankin and her city broker husband, their expressions and inane chatter at dinner parties whose aperitifs are Pimms and pork scratchings. The drawings achieve both emotional depth and even eroticism (particularly Gemma’s seductive eyes and tastes in lingerie), capturing sexual passion, jealousy, rage and remorse. Fantasy as always is an important element. Gemma’s dream of a new life in France as an interior designer, complete with her lover and child, under entwined national flags, is beautifully drawn – though never realized.

Tamara Drewe is an equally eroticised and much-pursued heroine, though ultimately more self-serving and much less of a victim. The plot unfolds over the four seasons and its setting is the rural village of Ewedown. This is home to a Writers’ retreat run by Beth Hardiman whose husband Nick is a successful author and habitual philanderer. The several narrators include Beth, progressively learning the truth about her husband (‘devious bugger’), and American academic Glen Larson whose curiosity forces him to peer impotently into the fraught lives of those around him. These include London journalist and aspiring author Tamara, whose return to the village’s big house – after a beauty-enhancing nose job - sparks off competition among the men and jealousy among the women. Watching all these events are the bored resentful teenagers of the village, notably Casey and Jody, the latter having a dangerous fixation with one of Tamara’s lovers, rock star Ben. The latter provide some of the most revealing social observations, especially in their chatter about celebrity magazines and fumbling sexual experiences: ‘Clothes on. Zip stuff. Patted the dog through the letterbox’. And as always there are funny vignettes of writers: ‘He is a fairly well known poet … if he’s wearing the hat, it’s a sign not to talk to him’.

Posy Simmonds’ works are unfailingly entertaining, provoking laughter and pathos in equal measures. We look forward to the next productions of this fine satirist of our manners and times.