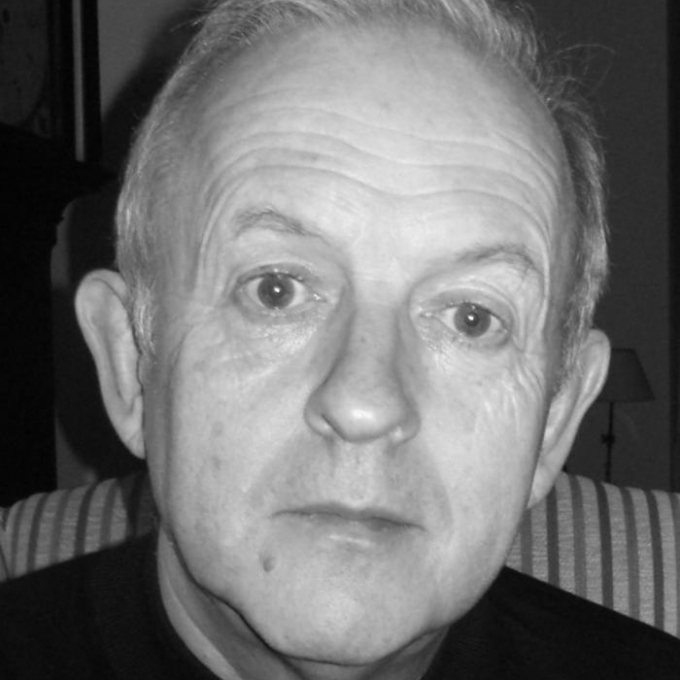 Philip Norman was born in London in 1943 and grew up on the Isle of Wight. He is a biographer, novelist, journalist and playwright. Norman records his childhood memories on the small island in his autobiography, Babycham Night, growing up on Ryde Pier (where his father managed the Seagull Ballroom) with its ‘neon signs in garish abundance’.

Norman became a correspondent for The Sunday Times in the late 1960s, aged just twenty-two. During this period he was involved in investigative journalism on the Beatles. He has been a regular contributor to the Times and Sunday Times ever since. His journalism ranges from profiles of Elizabeth Taylor and P. G. Wodehouse, to Colonel Gaddafi and Tony Blair.

He was named one of Granta’s Best of Young British Novelists in 1983.

Philip Norman is perhaps best known for his biographies of two the biggest bands to come out of the 1960s: the Beatles and the Rolling Stones. He has spent the last thirty-odd years of his career telling and re-telling their stories, not because he’s a scratched record, but because he sees the story of these two bands as what he terms ‘one single epic story’.

One of the most respected rock biographers of a generation, Norman has also published influential biographies of two other musical icons whose careers effectively book-end the prime years of the Stones and Beatles: Buddy Holly, and Elton John. The latter, Norman tells us, was wearing spectacles by his early teens, "not because he needed them, but in homage to Buddy Holly".

Writing in the Guardian, Fiona MacCarthy says of Norman:

He brings to the subject a great depth of knowledge and a critical detachment that raises his writing way above the level of most rock band biography, usually a nightmare of unattributed anecdote and gush.

Some critics talk of the novelistic qualities of Norman’s biographies and this, along with the sheer scale and detail of many of his books, flies in the face of commonsense assumptions about his subjects as light entertainment. As Norman put it in relation to his first biography, Shout! The Beatles in Their Generation (1981), ‘I was tempted to set down a marker in a field where the overwhelming majority of books were shoddily produced paperbacks, retelling the same facts in half-literate prose’. Or again, in terms of his John Lennon: The Life (2008): “I suddenly thought, he really deserves a book … a real biography, as if he were John Keats or Mahatma Ghandi. Not a pop person but a major, towering presence in his century.” Considered together, his biographies published between 1981 and the present provide much more than an insight into a handful of rock stars, they offer an alternative cultural history of the 1960s and 1970s.

Shout! was no faltering start to this biographer’s burgeoning career. Described in the New York Times as "... the definitive biography – comprehensive, intelligent, sensitively written and exhaustively researched", it is based upon a formidable body of secondary materials. Norman also had first-hand knowledge of the Fab Four up his sleeve from his years as a correspondent for the Sunday Times. This combination of inside information and careful scholarship allows Norman to strike the right balance between studied distance and more intimate immediacy. Organised around five sections (‘Wishing’, ‘Getting’, ‘Having’, Wasting’, and ‘Lasting’), the book runs from 9 October 1940 and the birth of Lennon in Liverpool to, 450 pages later, 20 October 2001 and McCartney’s post-9/11 performance in New York.

Norman’s next big biography was of the Rolling Stones, Symphony for the Devil: The Rolling Stones Story (1984). It is a story which he has told in various forms versions and iterations in the 1980s, (The Life and Good Times of the Rolling Stones, 1989), 1990s (The Stones, 1993), noughties (The Stones: The Acclaimed Biography, 2002) and most recently, in 2012 (Mick Jagger, 2012), to mark the fiftieth anniversary of the band. There’s a certain symmetry to Norman’s publishing career: just as his story of the Beatles led to a more intimate portrait of Lennon, so too his story of the Stones led to a more intimate portrait of Jagger.

First interviewed by Norman in 1965, Jagger emerges in Mick Jagger as, by turns, boring business tycoon, and saving grace of the Stones; rebel and conformist, measured drug taker, and insatiable woman eater, extravagant on stage and tight-fisted off. The biography covers the defining moments of Jagger’s career in compelling detail: the famous 1967 drug bust; the death of Brian Jones; the conquest of America, the violence at Altamont. Yet Norman’s biography does more than trade in the clichéd events and psychological flip-sides of Jagger’s character. Mick Jagger also works hard to confront and question many of the received ideas and mythologies that have come to surround the man. As the Boston Globe succinctly put it, Mick Jagger reveals ‘a generous side less well known’ to his casual fans: buying a cottage for girlfriend Marianne Faithfull’s mother, being more supportive of Rolling Stones founder Brian Jones than has been alleged, enlisting the Stones to play a benefit concert for victims of a Nicaragua earthquake (at the urging of his then-wife, Bianca) and he is said to be a good father overall.

By the time he embarked on his first biography of the Beatles, in the late 1970s, Norman had already published three works of fiction, and while his non-fiction has tended to overshadow the novels, an account of his work would be incomplete without the latter. Norman was named one of the Best of Young British Novelists in Granta’s original list of 1983, a list that contained the likes of Ian McEwan, Julian Barnes, Kazuo Ishiguro and Pat Barker.

Set in the summer of 1954, The Skater’s Waltz (1985) is a semi-autobiographical novel about a boy growing up between the Isle of Wight and the dilapidated flat of his grandmother in London. Louis Belmayne is 11. The story of his growth and coming of age is set against the backdrop of a disintegrating home life. Babysham Night returns to this material in a more directly autobiographical account of Norman’s youth. The focus on personality and period, the trademark of his biographies, serves Norman well here: critics talk of both books’ ability to evoke the 1950s, and to capture the vulnerability of childhood. In Everyone’s Gone to the Moon (1996), a novel set in London during the swinging sixties, Norman moves away from autobiography and memories, but the author’s formative experiences remain perceptible beneath the surface. Focusing on the world of journalism, and featuring cameos from both the Beatles and the Stones, Norman is as resourceful as a novelist as he is a biographer.

@LitBritish Anthology 'These Are the Hands' collects poems from across the health service, from doctors to cleaners, in aid of… https://t.co/AVd4RUqvPo
(2 days ago)

@LitBritish RT @BCouncil_Wales: Tune into the @WalesArtsReview #Digithon this weekend – an online digital arts festival featuring some of Wales’ top mu…
(2 days ago)

@LitBritish RT @PoetrySociety: From 6:30pm we'll be announcing the commended and winning poems in the 2019 #NationalPoetryCompetition! We'll be sharing…
(2 days ago)