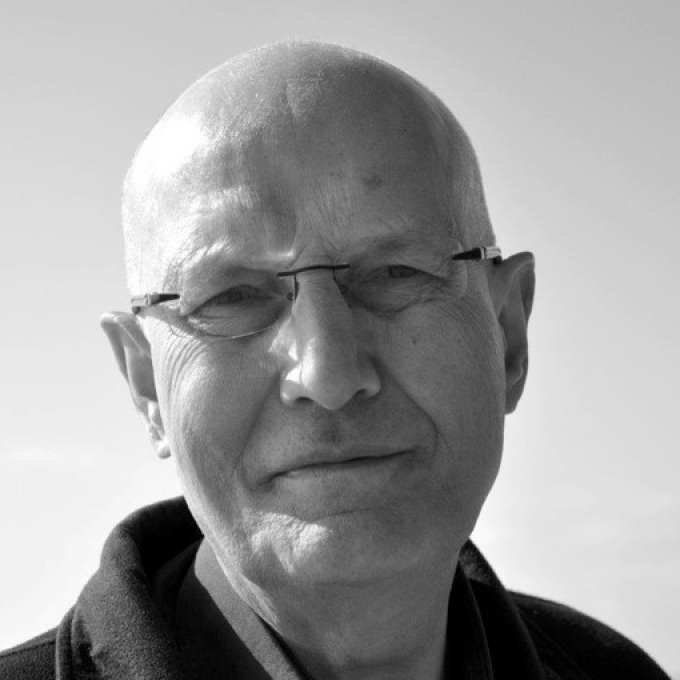 Peter Finch lives in Cardiff and is a poet, critic, author and reviewer.

In the 1960s and '70s he edited the literary magazine, second aeon, exhibited visual poetry and later became well-known for his performance poetry. He ran the Arts Council of Wales bookshop, Oriel, for some years, and was treasurer of the Association of Little Presses. From 1998 to 2011, he was Chief Executive of Literature Wales (formerly the Welsh Academi).

He also writes books about the poetry publishing scene such as How to Publish Your Poetry (1985), How to Publish Yourself (1987) and The Poetry Business (1994) and gives lectures and presentations on these topics.  He has worked on various poetry and public Art projects and in schools.

Peter Finch’s other non-fiction books include the Real Cardiff series (2002-2009). For this work he was awarded an Honorary Fellowship of the Royal Society of Architects of Wales in 2007. Real Wales was published in 2008.

In 2011, he won the Ted Slade Award for Service to Poetry.

Brash, innovative, prolific and always furiously up-to-date, Peter Finch has spoken of his ‘love of the experimental’.

Thanks in part to the sound, visual, concrete and performance poet Bob Cobbing, early in Finch’s poetic career he discovered and fully embraced experimental poetry, setting off a quest to push poetic boundaries in these directions himself. A lot of such work is, by its very nature, virtually unquotable – and often owes as much to conceptual art and music as it does to modern poetry. Finch’s early compositions included testing items such as cassette recorders to their technical limits and logging the results, and putting together ‘found’ poems, such as ‘Wales’ (Selected Poems, 1987), ‘machine-assembled from a collection of early issues of Poetry Wales’. The piece ‘On Criticism’ (Selected Poems) deals with the critics’ presumed responses to such work, constituting as it did three photocopies of an apparently unfriendly review, increasingly scrunched up into a paper ball. Comments such as ‘gross heap of dross’ and ‘what effrontery’ are visible in the first image, before the creases take over and render the criticism nothing more than waste paper.

In the 1980s, Finch developed a passionate interest in performance poetry, and perhaps more than anything else he is known as a highly animated, kinetic performer of his work – or at any rate that part of it which is geared towards public recital. Performance poetry, if it is going to work, must be egalitarian, not elitist. As Finch has acknowledged, such poems need to be ‘accessible’, and ‘humour is an advantage’. Finch, then, is a lot of things, and after publishing more than 20 collections of poetry, he gives no indication of running out of steam.

Unsurprisingly, his poems take on many forms. He is playful, often irreverent, and his oeuvre includes entertaining autobiographical and biographical prose sketches, such as ‘RNLD TOMOS’ (Useful, 1997), about R.S. Thomas, something of a mixed influence and inspiration for Finch: ‘A pioneer of dark wounds and internal tensions. In old age bird song and reliable grouch’. He has also written cheeky bastardisations of famous sonnets by Shakespeare and Wordsworth, the latter in the language of a text message, called ‘N Wst Brdg’:

Many of Finch’s pieces have the immediacy and crowd-pleasing panache of work conceived for the stage. His poems are often riddled with funny, seemingly off-the-cuff observations of people being people – not least on his own home ground, industrialised South Wales. Thus ‘South Wales Haiku’ (Food, 2001), with its (mis)use of an ancient and exotic form:

'Two days of sun
Twat in his garden
With a hose'

Finch also has a keen ear for the strange and funny things people say, dropping punctuation to get the tone just right. In ‘Looking for the Southern Cross’ (Zen Cymru) the guard outside a museum ‘said cross / boy you want Jesus. Maybe I did’.

Finch’s work has drawn uneasy comparisons with that of poets such as Hugh MacDiarmid, Tom Leonard, and, of course, R.S. Thomas. But Finch differs markedly from Thomas in at least two important senses: despite his penchant for flagrant experimentalism, Finch is in many ways a populist, not a diffident loner; and commensurately he is a Welsh poet of the over-populated south, nestled against the Severn Estuary with its ‘heavy population, heavy water’ (‘Severn Estuary ABC’, Poems for Ghosts, 1991), not of Thomas’s depopulated North Wales and lonely coastal outcrops. Nonetheless, both poets have an uneasy temperamental affinity. ‘Hills’ (Poems for Ghosts), begins with one of the opening lines of what is probably Thomas’s most famous poem, ‘A Peasant’ (‘Just an ordinary man of the bald Welsh hills’), and segues into a critical commentary – and one that implicates the speaker through the choice of pronoun – on the love of South Walians for English television transmitted from the Mendip Hills in Somerset in preference to their own Welsh-language station S4C, which is broadcast from Finch’s hometown of Cardiff:

'The problem gaps, ordinary television,
nationalist garbage, insulting ignorance,
shot sheep, invited bald interference,
don’t need real sheep where we are,
sheepless, sheepless, Welsh as you are, still,
no gasps, gogs or gaps for us,
no,
point our aerials at the Mendip Hills.'

In a note accompanying this poem, Finch comments, with a wry ferocity certainly reminiscent of Thomas, that ‘most South Wales users kept their aerials pointed across the water apparently preferring the news from Yeovil to reports from Wales’. Thomas, a fervent Welsh nationalist, was still alive when this poem was published in 1991, and he certainly would have applauded the sentiment.

Cardiff does not have a Poet Laureate, but if it did, Finch would be an obvious choice. He is, quite definitively, a poet of place, and in recent years his books have included The Welsh Poems (2006) and three offbeat guides to Cardiff (Real Cardiff, 2002; Real Cardiff 2, 2004; Real Cardiff 3, 2009). Finch has put a lot of effort into discussing what it means to be Welsh, and the playfulness of this poet should not be allowed to obfuscate the serious political and social conscience that underscores much of his work. If his poems can stick out tongues and blow raspberries, they can also bite. Many of them attempt to do both. ‘Words Beginning with A’(Food) is about a White Paper that played a role in the establishment the Welsh Assembly. Noticing that the Paper had been doctored, Finch decided to put ‘back’ key phrases that he thought had been ‘omitted’.

Other poems, such as ‘Partisan’ (Useful), mock certain Welsh attitudes about national heritage: ‘Welsh Saunders Mabinignog crap / nasty blydi books we’re a digidol nation’. Finch loves his country, but his is the love of a disappointed family member, not a jingoistic zealot. And out of this tension have come many of his more arresting poems.

Why do I write? Originally because I couldn’t sing. I tried, bought the guitar, let the finger tips bleed, worked long and hard but ultimately the voice would not follow. Instead I turned to writing – poetry first, fiction and critical works later. Poetry was something in which you could do whatever you wanted, anything.  A poem is a poem because the poet says it is. Such freedom perfectly matched the '60s and '70s, decades where I began to learn what life might be. If anything drove me it was the urge to push language out to its boundaries, press until it bends and then breaks. And beyond this anarchy lay form and structure. That’s where I am now. Today I write through necessity – life is incomplete without the process. I also have things to say and people to say them to. Audiences are vital. Poetry does not work in vacuum. Prose fails when it stays in the drawer. Wales is important to me, my country, my culture, its place in the wider world. So, too, is my alignment with the experimenters and innovators of the 20th and 21st centuries. It’s a heady mix.