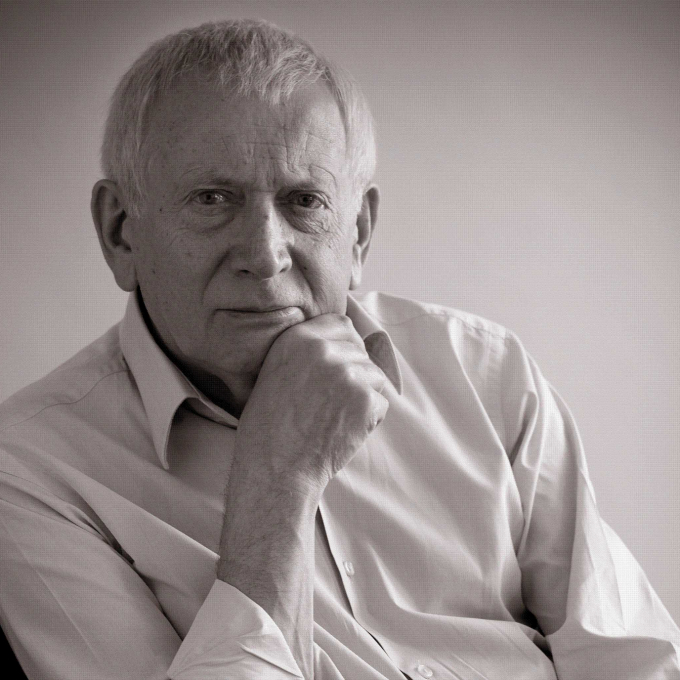 Writer and broadcaster Paul Bailey was born on 16 February 1937.

He was appointed Literary Fellow at Newcastle and Durham Universities (1972-4), and was awarded a Bicentennial Fellowship in 1976, enabling him to travel to the USA, where he was Visiting Lecturer in English Literature at the North Dakota State University (1977-9). He was awarded the E.M. Forster Award in 1974 and in 1978 he won the George Orwell Prize for his essay 'The Limitations of Despair', first published in The Listener magazine. Paul Bailey's novels include At The Jerusalem (1967), which is set in an old people's home, and which won a Somerset Maugham Award and an Arts Council Writers' Award; Peter Smart's Confessions (1977) and Gabriel's Lament (1986), both shortlisted for the Booker Prize for Fiction; and Sugar Cane (1993), a sequel to Gabriel's Lament. Kitty and Virgil (1998) is the story of the relationship between an Englishwoman and an exiled Romanian poet. In his last novel, Uncle Rudolf (2002), the narrator looks back on his colourful life and his rescue as a young boy from a likely death in fascist Romania, by his uncle, a gifted lyric tenor and the novel's eponymous hero.

He has also written plays for radio and television: At Cousin Henry's was broadcast in 1964 and his adaptation of Joe Ackerley's We Think the World of You was televised in 1980. His non-fiction books include two volumes of memoir, entitled An Immaculate Mistake: Scenes from Childhood and Beyond (1990), and A Dog's Life (2003). Three Queer Lives: An Alternative Biography of Naomi Jacob, Fred Barnes and Arthur Marshall (2001), is a biography of three gay popular entertainers from the twentieth century. His latest books are Chapman's Odyssey (2011) and The Prince's Boy (2014).

Paul Bailey is an acclaimed writer of fiction, biography and autobiography.

His diverse works have included An English Madam (1982), a biography of the woman who ran a notorious brothel, and An Immaculate Mistake (1990), his memoirs of growing up gay in a family who believed he was "not natural" because he brought his mother flowers. He was editor of The Oxford Book of London (1995) and The Stately Homo (2000), a collection of tributes to the flamboyant and multi-faceted English eccentric Quentin Crisp. Most recently he published Three Queer Lives (2001), biographical accounts of two men and a woman who succeeded against the odds at a time when being gay was more difficult than it generally is today. In both his non-fiction and his novels, Bailey shows an interest in those who find themselves out of place in some way. His novel, Kitty and Virgil (1998), tells a love story of two middle-aged people, one of whom is a Romanian refugee in exile in Britain. Bailey's characters are frequently at odds with society, with the law, or (often most painfully) with their own families. In both his fiction and his non-fiction, he is an acute observer of the nastiness of intolerance, and vividly depicts the psychological cruelty that families can inflict upon individuals.

In Bailey's work, the physical frailty of humanity and the blackly bizarre nature of human disintegration are significant symbols of what it means to be human. His first novel, At the Jerusalem (1967), is set in an old people's home of that name, where the central character, Faith Gradny, finds herself out of place in the world of gossip and enforced community, and gradually retreats more and more into her own private world of bitter memories. The novel emphasises the ways in which sickness and old age remove all sense of personal dignity and privacy. Bailey captures exactly the patronising tone adopted by nurses and visiting relatives as they question the elderly about hot baths, fresh vegetables and "making friends". Bailey has a sharp ear for the superior resident full of advice to the newcomer, for the "loud bright" voices the nurses use in addressing their patients, and for the embarrassed manner of the visitors. Many of Bailey's characters are obsessed with human frailty and physicality, and with the symptoms of disease and decay. Bailey conjures up the sights and smells of sickness with dismaying vividness. In Peter Smart's Confessions (1977) Dr. F. Leonard Cottie, author of the "lethally boring" With Stethoscope and Scalpel, makes a point of identifying obscure and physically revolting symptoms as he goes out and about. At school, Peter Smart is befriended by the joyless and hypochondriac Bobby Shorter who treats him to accounts of his various ailments. In Peter Smart's career as an actor he encounters the director Hal Musgrave, who applies quirky medical and psychological theories to Hamlet: the Ghost has a stammer, Polonius is a secret drinker, Gertrude is menopausal, and Hamlet suffers from congenital syphilis. Teeth feature as a grossly comic indicator of the physicality of humanity. Peter's grandmother loses her stumps of teeth one by one, spitting them into her beer, leaving them embedded in a chunk of steak at the side of her plate, or dropping them into her cooking for others to choke on. In Old Soldiers (1980) 'Captain Standish', who reincarnates himself variously as Tommy the down-and-out and Julian the yet-to-be-recognised poet, does so by changing his teeth, at one point he deposits a set at the railway station as left luggage. Details of food and drink reflect not only the physical but also the emotional lives of Bailey's characters. Dr. Cottie of Peter Smart's Confessions will eat only dry and tasteless fish and cabbage. In Old Soldiers 'Captain Standish' treats Victor Harker, the second old soldier of the title, to a meal of stringy meat and wine that "makes the liver flinch". In Gabriel's Lament (1986), Bailey's most ambitious novel to date, Gabriel's father's transformation from larger than life entertainer to abusive and vulgar oaf is reflected in his shift from beer to whisky. His oafishness and his prejudices are underlined by his responses not only to Indian food but also to British wine, and he holds forth in graphic detail on the smell and taste of tripe. Gabriel's Aunt Kathleen in contrast distances herself from the squalor of the city and of her brother through life in the country on a vegetarian diet. In similar fashion, houses serve, especially through their interior décor, to expose personality and the pretentiousness of false aspirations. Bailey has a perceptive eye for the ways in which houses can make people feel uncomfortable or at ease. In At the Jerusalem Faith Gradny suffers from the ubiquitous flowery wallpaper of her stepson's wife's house, as well as from the wife's mother's 'lounge' which comes straight from a picture in an American magazine. When Gabriel's father comes into money in Gabriel's Lament, his move from beer to whisky is paralleled by a move from a terraced house in London to a "family seat" in Clapham, where Gabriel's beloved mother is isolated from her friends and family. The pretensions of what Gabriel's father calls 'Blenheim' after the palace are contrasted both with Gabriel's old terraced home and with Aunt Kathleen's homely and spotless cottage. Bailey's novels are at their most disturbing as well as their most convincing when he is cataloguing the cruelty of families. Names become indicative of the depersonalisation or mortification of individuals. Peter Smart's mother never addresses him as anything but "You". Gabriel's father humiliates him with the nickname "Piss-a-Bed". In At the Jerusalem, Faith Gradny struggles to protest against the ever-present and condescending "dear". The refusal to communicate and the painfully dismissive stock responses to genuine questions also become symptomatic of the self-absorbed nature of families. Peter Smart's "whys?" and "whats?" are fobbed off by his mother's "y is the twenty-fifth letter of the alphabet" and "Watt invented steam". Bailey conducts much of his narrative through dialogue. The clichés and aggressive questions which Peter Smart's mother flings at her son reflect her general lack of interest in his well being. Gabriel's father and 'Captain Standish' in Old Soldiers have a distinctively vulgar and euphemistic turn of phrase, while Gabriel's father revels in grand, pretentious circumlocutions. Paul Bailey's novels often catalogue the ultimate bleakness of life, a bleakness from which his characters are only partially rescued by his grim and often grotesque humour. His accounts of the horrors that can haunt domestic life are disturbing in their apparent blandness. He is an accurate observer of the stupidity of prejudice and of the grimly farcical nature of cruelty. He well deserves his high reputation as an analyst of family relations and social manners.

'I write because I have to and want to. It's as simple, or as complicated, as that. And I write novels specifically because I am curious about my fellow creatures. There is no end to their mystery. I share Isaac Babel's lifelong ambition to write with simplicity, brevity and precision. It was he who said 'No steel can pierce the human heart so chillingly as a period at the right moment.' I hope one or two of my full stops have done, and will do, just that.'