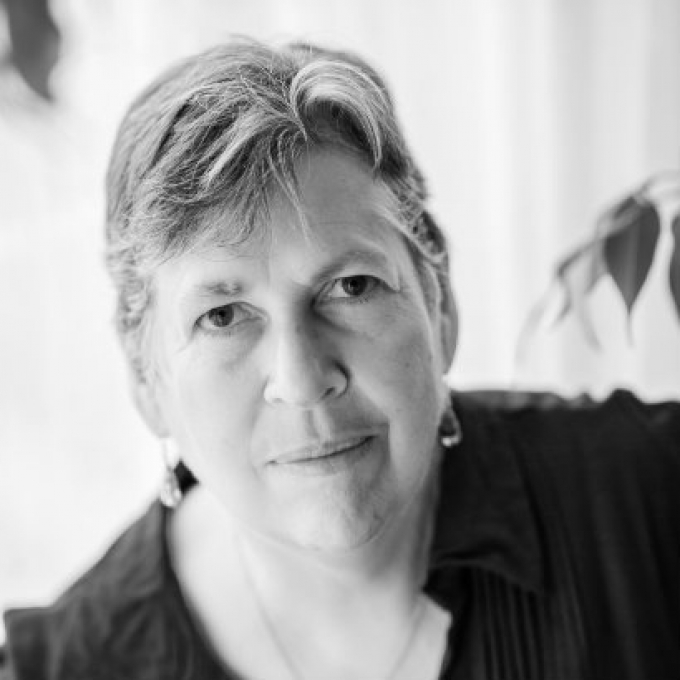 Patricia Duncker was born in Kingston, Jamaica on 29 June 1951.

Her first novel, the acclaimed Hallucinating Foucault (1996), won the Dillons First Fiction Award and the McKitterick Prize. Set mainly in France, the narrative centres on a Ph.D. student's obsessive search for his subject, the (fictional) French writer Paul Michel. Monsieur Shoushana's Lemon Trees, a collection of short stories exploring themes of desire, jealousy and revenge, was published in 1997 and was shortlisted for the PEN/Macmillan Silver Pen Award. James Miranda Barry (1999) is a fictional account of the life of colonial doctor, transvestite, duelist and socialite Barry (1795-1865).Her third novel, The Deadly Space Between (2002), is a disturbing psychological thriller about 18-year-old Toby Hawk and his mother's enigmatic new lover. A collection of provocative stories, Seven Tales of Sex and Death, was published in 2003. Her latest novels are: Miss Webster and Chérif (2006), a comedy of errors set in the post 9/11 world with an indomitable leading character; and The Strange Case of the Composer and the Judge (2010), a powerful mystery story. It was shortlisted for both the 2011 Green Carnation Prize and the 2010 Crime Writers' Association Gold Dagger.

‘They were both preoccupied with marginal, muted voices,’ remarks the narrator in Hallucinating Foucault (1996), of the philosopher Michel Foucault and the novelist Paul Michel, ‘They were both captivated by the grotesque, the bizarre, the demonic.

’ Michel, he continues, ‘Saw the world whole, but from an oblique angle.’ These comments capture something of the distinctiveness – and distinction – of the work of Patricia Duncker, whose writing is similarly characterized by attention to, even fascination with, transgression and extremity in personalities and events. Indeed, Duncker’s appetite for transgression extends to her relation to genre; this is a writer who resists categorisation. As the above bibliography makes clear (there is a far longer version on Duncker’s webpage at the University of East Anglia), Duncker is equally at home in the scholarly article and academic study (as a highly regarded 18th- and 19th-century literature specialist, and theoretician of feminism and gender studies); in the pages of newspapers and magazines (she reviews regularly and widely, demonstrating a gargantuan appetite for reading for which she is rightly famed - her many New Statesman pieces are available online); in the short story (two collections to date and a number of uncollected pieces); and, of course, in the novel. It might be added that she is also a wonderful reader-performer of her work, and an engaging raconteur and conversationalist.

Impressive as this list of achievements is, it hardly reveals the sophistication and intelligence of Duncker’s writing, its dynamism, and its enthralling capacity for formal and structural experiment. Here, again, at the level of the creative imagination, is a powerful force of transgression and risk. Across all of Duncker’s writings we find a similar refusal of the boundaries between the factual and the fictional. In Hallucinating Foucault, her debut novel, the plot traces the obsessive relationship between Foucault, the ‘real’ philosopher (who never appears), and Michel, a novelist of Duncker’s creation. In James Miranda Barry (1999), Duncker takes us into the mind of the eponymous 19th-century military doctor and medical innovator, whose fame as a surgeon, colonial administrator, duellist and wit, was quite surpassed by the notoriety generated by the discovery, after his death, that he was (and it remains unclear), a woman or a transsexual. Duncker’s most recent work, The Deadly Space Between (2002), charts another obsessive relationship, this time across the classic oedipal triangle (there is a delightful early passage of geometry that sets up the motif), between mother, son and the enigmatic, overpowering father-figure Roehm, a character who is, and is not, Gustave Roehm, an 18th-century botanist and Alpine explorer; Ernst Rohm, the psychopathic commander of Hitler’s SA; and the French film director, Eric Rohmer, famous for his intimate ensemble pieces elaborating extreme sexual and familial scenarios. ‘Myth beats history hands down,’ comments Duncker in a review of Jane Stevenson’s Astraea (2003), ‘It is more exciting to enter imaginary worlds than to be told what really happened.’ In each of her novels, the blurring, transcending of the categories of the real and the imaginary produces evocative narratives of thick historical texture, challenging the reader’s expectations and preconceptions.

The blurring of categories is also characteristic of Duncker’s writing in that she writes simultaneously at several generic levels. Hallucinating Foucault and The Deadly Space Between, and any number of her short tales, succeed first as thrillers or mysteries, accelerating to unexpected, satisfying-but-troubling conclusions; Duncker is a fine manipulator of plot and timing. At the same time, these are accomplished investigations of extreme psychological states, of the nature of obsessive and unusual characters – Michel, in Hallucinating Foucault, has been incarcerated for years and is persuasive and articulate about his insanity. But there are always yet more levels to her stories, resonating with Duncker’s sense of other texts, other stories, of which her own writing can only ever be a reworking. ‘Writing is about language and other writers and other texts,’ she says in an interview with Chris Hall for Spike online magazine, ‘Behind every book stands another book, it is up to you to choose what those books are.’ ‘Stalker’, a short story in Seven Tales of Sex and Death (2003), reprinted from New Writing 8 (1999), is exemplary in this regard. It is a powerful, first-person account of a woman, Sem, who senses, knows she is being stalked. A perverse complicity develops between narrator and voyeur, even as the story darkens dramatically with a series of rapes and murders of extreme, ritualized violence, the victims all associated with Sem. The tale closes with the narrator alone, expectant, waiting for the arrival of her doom – and her consummation. At one level, in the gothic mode, this is an eerie and frightening story; at another level, it is a disturbing representation of one woman’s psyche, expressing and exposing taboo sentiments around patriarchy, female masochism and sexual excess. The writing gains still more force and resonance, however, as the reader pieces together a further textual plane, concerned with the appropriation and reworking of classical myths associated with rape, violence and sexual obsession. These tales, drawn primarily from Ovid, involve Zeus transforming himself in various ways in order to approach and possess the objects of his desire, and include the episodes of Europa and the Bull, Leda and the Swan, and the Zeus/Ganymede story (which is ultimately at the origins of the Trojan conflicts). These intertexts are signalled partly in humorous nudges to the reader (a toilet paper advertising campaign, ‘LEADER – soft as a swan’s feather’; a TV programme ‘Europe Now’); through the names of characters (Helena Swann; her lover Diana; the maid, Athena; Sem. as a shortening for Semele); and in the saturation of the story with references to mosaics and other artefacts associated with Zeus and Dionysus (Sem’s husband is an archaeologist). The allusiveness of the text, as elsewhere in Duncker’s work, serves specifically to deepen and complicate the surface narrative, locating the story in an altered semantic and symbolic field, provoking the reader to reconsider both the normative bases of our moral perspectives and our assumptions of psychological verisimilitude and realism. Such exploration of the intersections between psychology and mythology is one more aspect of Duncker’s assault on our assumptions about the relations between the real and the imaginary, and gives her writing the vibrancy and vitality to reach, and engage, multiple and enduring readerships.

2010
The Strange Case of the Composer and the Judge
2007
Safe World Gone: Contemporary Stories by Women from Wales
2007
Safe World Gone
2006
Miss Webster and Chérif
2004
Mirror, mirror
2003
Seven Tales of Sex and Death
2002
The Deadly Space Between
2002
Writing on the Wall: Selected Essays
2002
The Woman Who Loved Cucumbers
1999
James Miranda Barry
1997
Monsieur Shoushana's Lemon Trees
1996
Hallucinating Foucault
1996
Cancer: Through the Eyes of Ten Women
1992
Sisters and Strangers: An Introduction to Contemporary Feminist Fiction
1990
In and Out of Time: Lesbian Feminist Fiction

'I am a Catholic writer in the Graham Greene mould. He once said of his own work, 'Our interest's on the dangerous edge of things ...' I would say that this is also true of my own writing. I write about people on the edge of society; sexual outlaws, the marginal, the mad, the disguised. I write about psychological extremity, the deadly space between the normal world and damnation. If I had been a writer five hundred years ago I would probably have been a nun and told you, quite calmly, that my main preoccupations were the four last things: Heaven, Hell, Death and the Judgement. My fiction comes out of my reading and my deepest intellectual concerns. I write for a mainstream audience so that my fiction is deliberately playful, accessible, with a warm nod to popular genres; the thriller, the horror novel, the detective story, the historical romance. I like books to have a strong sense of place. Like Greene, I do a lot of travelling research and wander the world with my camera and notebook. Unlike Greene I have never worked for MI6, but I like to think of the novelist as spy, one of God's Spies.'

@LitBritish RT @BritishArts: This week we're learning more about our @LitBritish #LitShowcase authors. First up, let us introduce @hanlavery. Hannah is…
(8 hours ago)

@LitBritish RT @pkBritish: If you teach British Literature then we'd love to hear from you! Take the Write Now survey, the first ever global review of…
(11 hours ago)