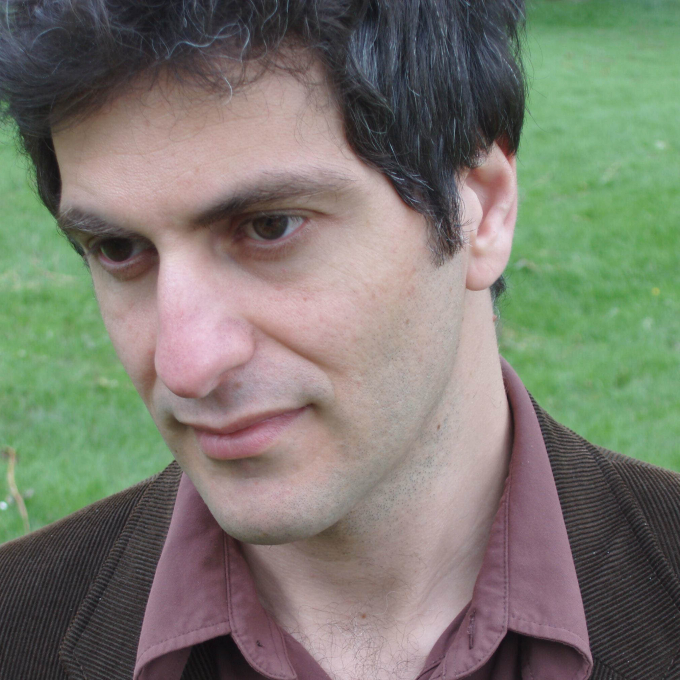 He studied engineering and worked in industry, then studied for an MA in Creative Writing at the University of East Anglia.

His first book, Little Infamies (2002) is a collection of connected short stories set in one nameless Greek village, and his second book, The Maze (2004), is a novel set in Anatolia in 1922. It was shortlisted for the 2004 Whitbread First Novel Award. Short stories by Panos Karnezis have been broadcast by BBC Radio 4 and have appeared in Granta, New Writing 11, Prospect, and Areté.

'“What's the matter with you?" Stella snapped at him.
"Only Bible salesmen and city idlers are so rude as to knock at someone's door at this time of day.”'

On reading Panos Karnezis's Little Infamies (2002), we feel as if we have intruded into a secluded world. A cycle of short stories set in an unnamed Greek village sometime in the 1950s, Little Infamies has much in common with Sherwood Anderson's Winesburg, Ohio. Though just under 300 pages, Karnezis casts a cinematic eye over the village inhabitants: the barber, the doctor, the landowner, the spinster and the indomitable Father Yerasimo, the unlikely shepherd of his riotous flock. This hard-drinking priest is the key to Little Infamies; its characters are cheats, liars, murderers and thieves. Many of the stories hinge on private and public humiliations and Olympic feats of cruelty and selfishness. It is a spellbinding world, but a hard one. It is up to Father Yerasimo to keep these sinners in line. In 'Deus Ex Machina', Isidoro, a farmer, unexpectedly inherits a race-horse from a distant relative, 'a pagan repenter who had been told on his deathbed that the pearly gates would remain shut like a constipated arse unless he demonstrated humility and the altruism of love.' Yet Isidoro, like his neighbours, is comically opposed to ethics: '“It's bad luck to see a priest in the morning” he sighs.' When later in the story Isidoro finds out his horse 'History' is worthless, and almost knifes the scheming landlord in a fit of rage when the latter laughs at him, Father Yerasimo ensures he is not reported to the authorities – so long as Isidoro makes a 'small donation' to the church. It is to Karnezis' credit that the stories in Little Infamies manage to be moral without being too didactic. Above all, Little Infamies is funny. 'A Circus Attraction' features a centaur who 'would be priceless if he didn't eat too much and curse so badly when drunk'. Though immortal, the centaur has fallen on hard times. He is sold to a band of gypsies who, throughout the course of the story, try to convince the creature to perform. At last, the old ringmaster offers the centaur a cut of the profits if he promises to behave; '“You are our main attraction” he says, “but if the circus with the sphinx comes this way, they'll put us out of business. Have you seen the size of her breasts?" "That bitch," the centaur said and spat.'

The Maze (2004), Karnezis’ follow-up, deals with the final days of the Greco-Turkish War (1919–1922). This time the 'village' is on the move. An army is in retreat. Brigadier Nestor leads what is left of his troops into a small town in Smyrna. Obsessed by thieves depleting his army's dwindling supplies, the Brigadier is further worried by the appearance of communist propaganda in his camp. The novel deals with Nestor's slide into dementia – facilitated by his addiction to morphia – and touches on familiar themes: the clash between science and faith, the modern and the old. Although nominated for the Whitbread First Novel Award, The Maze fell somewhat short of critical expectations.

Karnezis's third book, The Birthday Party (2007), on the other hand, is a return to form. From the start, the reader is treated to a savvy investigation of the limits of worldly riches. Caught somewhere between Fitzgerald and Murdoch, Karnezis invests shipping tycoon Marco Timoleon, 72, with a tragic presence. As he is preparing to celebrate his daughter's 25th birthday, Timoleon reminisces about his past, which comes to us courtesy of his biographer Ian Forster. From Timoleon's private Mediterranean island we 'visit' Izmir, Buenos Aires, Paris, New York, London as Timoleon, a spitting image of Aristotle Onassis, recounts his relentless rise up the ladder of wealth and social status. Unlike in The Maze, the scenes and dialogues of The Birthday Party are believable, the plot more expertly handled.

With The Convent (2010), Karnezis returns to his favourite characters, the servants of God who act as our fallible but virtuously-inspired moral guardians. Set in 'Our Lady of Mercy', a 16th-century nunnery in northern Spain, we are quickly introduced to a well-oiled holy machine – kept in order by the stern Mother Superior, Sister María Inés. One day (sometime in the early twentieth century) a baby is found inside a suitcase on the front steps of the convent. María Inés, whom we learn is internally crippled by the guilt of a child she aborted in her youth, is convinced the newborn's arrival is a miracle. The Convent sports a set of complex moral quandaries; unfortunately, the Mother Superior's rapid slide from an ascetic self-discipline into insanity is at times too quick for the reader to stomach. Still, though written in sparser language than its predecessors, The Convent features some superb scenes – for instance, the coolness with which María Inés poisons the stray dogs Sister Carlota has sheltered in the convent. The scene in which the other nuns notice something is amiss is mesmerizing: 'The dogs lying in the dust were not lazing in the sun, as they had at first assumed, but were in fact slowly dying in the creamy pools of their own vomit.' In other instances, Karnezis's lightly blasphemous tone remains highly amusing: 'If Rome ever ran out of priests it would start to train parrots.' These are the words a condemned man addresses to his confessor, Bishop Ezequiel Estrada, whose own loose sexual mores provide an unexpected plot twist. Later in the book this very Bishop proposes, much to the Mother Superior's horror, that 'it's about time we gave that old Darwin a sainthood.' Karnezis's prose is lyrical but not flowery. Marianne Brace, writing in The Independent dubbed him 'the engineer of human souls' – a reference to Karnezis' previous profession; indeed, there is something of Lawrence Durrell's laboured sentimentalism that is a recurring trope in Karnezis' prose: lost worlds, isolated communities, elaborate pasts and unfortunate love affairs. For the moment, Karnezis remains, in Andrew Motion's words 'one of the most interesting young writers around.' His intensely readable novels confirm this.