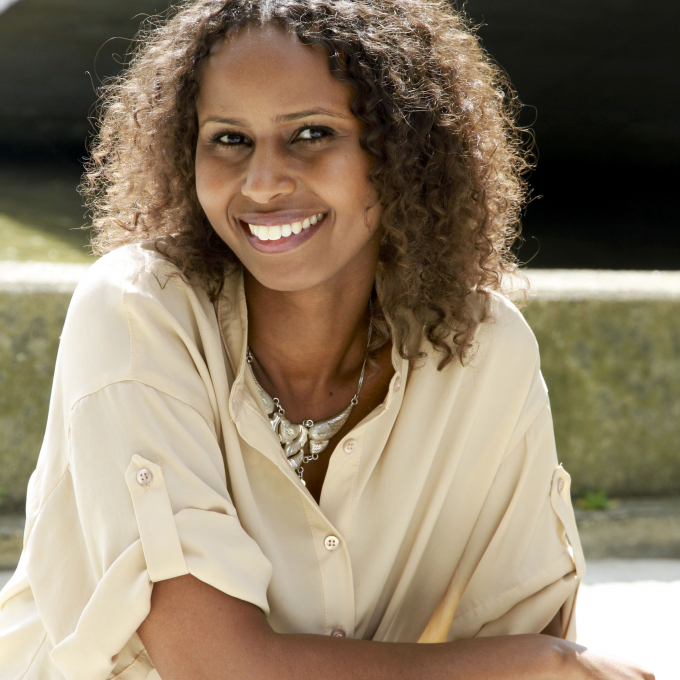 Nadifa Mohamed was born in Hargeisa (now in the Republic of Somaliland) in 1981 and moved as a child to England in 1986, staying permanently when war broke out in Somalia.

She lives in London and her first novel, Black Mamba Boy, based on her father's memories of his travels in the 1930s, was published in 2010. It was longlisted for the Orange Prize for Fiction and the Dylan Thomas Prize and shortlisted for the John Llewellyn-Rhys Memorial Prize and the Guardian First Book Award.

Black Mamba Boy, Nadifa Mohamed’s debut novel, managed to distinguish itself from many other contemporary African novels and win or be nominated for several literary awards.

This is owing to the fact that it is not merely a depiction of survival against the odds, and of Western brutality in Africa, as is the case in many of its kind: it is a lyrical piece of fiction, with innovative narration.

The novel tells the story of Jama, a Somali boy who we meet living in Aden with his mother in 1935. Somalis are seen to be outsiders in the Arab community; soon Jama’s mother dies, impelling him to leave for Somaliland in search of his father. This sets the tone for a story of uprooting and transient friendships: after he learns of his father’s death Jama must constantly move on in order to simply survive. His journey takes him through Abyssinia, Eritrea and Sudan to Egypt; finally obtaining a passport, he travels to Britain. His very unexotic and temporary home is then Port Talbot in South Wales, before, as the novel closes, we see him leaving for Gerset in Eritrea, to join his wife and child.

The novel is narrated in the third person, after beginning with the voice of Jama’s daughter in London in 2008. Structured around the stages of Jama’s journey, with the chapters named by place and date, we are sometimes reminded that behind the story lies a narrator creating suspense, such as when we are told of Jama and Liban that ‘The reality would turn out that way for one of them but not the other.’

The structure is explained by the author as borrowed from the idea of ‘griots’ and African ‘praise poetry’:

‘Griots are wandering praise-singers who are also the historians and storytellers of their societies. Even though it is a West African tradition, I thought it suited perfectly my father's story; I wanted a style that would celebrate his life with great literary flourishes rather than objectively describe it. The griot tradition also shares similarities with Somali poetry in their methods of composition and dissemination, and was a natural fit to the wandering, exploratory life of my father’ (Guardian, 6 Nov 2010).

Literary flourishes are found throughout the novel, for example in a scene where Jama experiences a storm:

‘At the darkest hour of night, the sky cracked and revealed a blue and white secret kingdom. The high heavens and low earth were joined by a sheet of conquering raindrops, followed by a thundering marching band that seemed to be playing drums, cymbals, violins, and reedy flutes whose notes fell down and smashed against the gasping desert earth, battering down an angry song of life.’

This is beautifully lyrical, and shows the novel deliberately working against social realism, as is the case in its use of magical elements: Jama sees and is encouraged by his father’s ghost, and his mother’s voice in a dream; he re-encounters friends in a way that defeats the probable, as does the way a bush suddenly and quickly grows on the grave of his friend Shidane. Leaving Eritrea, Jama and his wife pledge to speak to each other by looking at a star: this is not sentiment, but shows how a different culture views the universe.

As well as its narration, the sense of movement and place distinguishes the novel: among other things, it is geographically educational, and Aden and Djibouti in particular come vividly to life. It is a novel where the map included is essential, and a part of the text. It is equally interesting as a historical novel, showing how East Africa was affected by the Second World War. The narrator tells us that ‘By the time they reached the date palms of Tessenei and stopped their trek, the British had taken control of Italian East Africa’. The battles between British and Italians are not merely a backdrop to Jama’s story, they are the often the cause of it, impelling him to flee yet again. We see the 1941 Battle of Keren from an African point of view; even more memorably, Mohamed has Jama witness the horrific treatment of the ‘liberated’ Jews being purportedly taken to safety aboard the SS Exodus in 1947. The behaviour of the British crew here does not differ much from the Nazi treatment of the Jews.

There are clearly political aims in this very readable novel. Mohamed has written that:

‘Much has been written about how Britain's Jamaican community celebrated Usain Bolt's gold. But British Somalis, here in numbers for over two decades, are not so firmly placed in the national consciousness. And often when we are written about it is with the worst connotations: violence, terrorism, gangs … young Somalis' sense of identity seems more powerfully formed by the persistently negative representations in the media’ (Guardian, 8 August 2012).

Mohamed wants to counter these stereotypes. Black Mamba Boy is a postcolonial novel in its focus on the voices and experiences of European colonies in Africa, and its challenging of Western narration. It is a novel of the dispossessed in general, for Jewish communities make more than one appearance, but Mohamed also gives a voice to unheard Somalis:

‘“Everywhere I go I meet Somalis, always from the north, standing at a crossroads, looking up to the sky for direction, the poor souls never know where they’re going. They all say the same, there is nothing in our country …”’

It is however, despite the brutality and violence, a novel radiating courage and hope. This shows the influence of another major African writer, Chimamanda Ngozi Adichie. Mohamed has also cited other writers as influences:

‘If I had to choose particular writers, it would be Ahmadou Kourouma for his ability to combine African forms of storytelling with European, but also Toni Morrison, Arundhati Roy, Claude McKay and Dylan Thomas’ (Guardian, 6 Nov 2010).

It is sobering to remember that the novel is biographical: Mohamed has stated that she is pleased that her ‘father's story has been told and that through him we peek at the long history of East Africa.’ Her new novel, The Orchard of Lost Souls, will be published in 2013: readers can look forward to experiencing again the author’s narrative, historical and lyrical gifts.