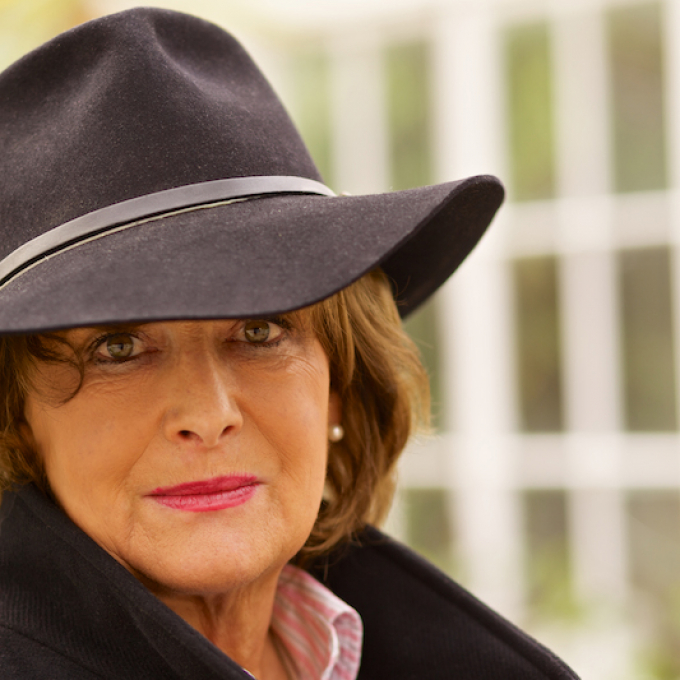 Minette Walters was born in Hertfordshire.

She read French at Durham University and worked as sub-editor on a romantic fiction magazine before becoming a freelance writer for women's magazines. She has written many articles for magazines and newspapers, and short stories.

Her first crime novel, The Ice House, was published in 1992, winning the Crime Writers' Association John Creasey Memorial Dagger, and this was followed by four further novels: The Sculptress (1993); The Scold's Bridle (1994); The Dark Room (1995); and The Echo (1997). These first five books have all been adapted for television by the BBC.

More prize-winning crime novels have followed, among the latest being The Chameleon's Shadow (2007), A Dreadful Murder (2013) and The Cellar (2015).

Crime writer Minette Walters is the author of popular works such as The Sculptress (1993) and The Scold’s Bridle (1994).

She began as a writer of romantic fiction, but found immediate acclaim via the crime genre with her first novel, The Ice House (1992). Her output has been phenomenal and she has published a book every year or every two years since this début. Although her novels stand alone, as she avoids writing crime series, they are typified by an interest in the implications of social breakdown and are always intricately plotted. She tends to describe and solve murder and crimes of sexual violence, and her narratives are often disrupted with documentary evidence such as police reports and newspaper clippings. Her work has been translated into over 30 different languages and she has been the recipient of several awards including the Crime Writers’ Association Macallan Gold Dagger for Fiction (for The Scold’s Bridle and for Fox Evil, 2002).

The main plot of The Ice House is based on police attempts to discover the identity and cause of death of a corpse that has been found in this eponymous structure. There are also several subplots, which include incest, and psychological and physical bullying of the women living at Streech Grange. In addition, the influence of the past on the present is a strong theme, as Phoebe Maybury’s innocence (in relation to her husband’s disappearance ten years ago) is questioned again.

Olive Martin is imprisoned for murder and is at the centre of Walters’ second novel, The Sculptress. She claims to be guilty and is interviewed by Rosalind Leigh in prison, who comes to question the case and verdict. Patrick McGrath’s review of her third novel, The Scold’s Bridle, praises her ‘serpentine twists of plots’ and this interpretation may also be applied to her earlier and later works. Although critical of what he sees as depictions of two dimensional characters, he also accepts that a crime novel is necessarily driven by plot rather than characterisation (New York Times, 2 October 1994). The Scold's Bridle was followed by The Dark Room (1995) and The Echo (1997).

The investigation of the rape and murder of Kate Sumner is at the heart of her sixth novel, The Breaker (1998). The solving of this crime is balanced with the thread of a love a story between PC Ingram and Maggie Jenner, who has become isolated since her supposed husband was exposed as a fraud. This was followed by the publication of The Shape of Snakes (2000), which was awarded the Pelle Rosencrantz Prize (Denmark) in 2000.

Acid Row (2001) exploits the crime genre whilst considering the meltdown of a society, which is portrayed as having its roots in social inequality. It begins at the end when it cites a newspaper report of a riot and murder and its title is taken from the graffiti that has been written over the faded street sign, ‘Welcome to Bassindale’. The new corruption, ‘Welcome to ASSI D row’, is thought to be a more relevant description of the troubled housing estate. With this novel, Walters continues to demonstrate her interest in depicting a fiction that has roots in a contemporary public debate. In this instance, fear of paedophilia and the actions of vigilante mobs are the major concerns.

Her seventh novel, Fox Evil, was highly praised by critics for the authentic depiction of psychological understanding and for its tight plotting. This was followed by Disordered Minds (2003), which draws extensively on the theme of British miscarriages of justice as have been witnessed in the wrongful verdicts made against Stefan Kiszko and Stephen Dowling. Their cases are cited in the early pages of the novel and they add weight to the enquiries of the main investigators, Dr Jonathan Hughes and Councillor George Gardener. They are trying to clear the name of Walters’ fictional creation, Howard Stamp, who was found guilty of murdering his grandmother in 1970. Mark Lawson argues that ‘a good crime novel combines factual authority with the benefits of invention’ and believes this is has been ‘brought off’ by Walters once more (Guardian, 13 December 2003). The tension is maintained throughout, as the past is probed by the unlikely but effective pairing of Jonathan and George.

This work is also adept in the way it connects past memories and events to the present. Psychology and the search for clues is used to help solve the murder, rather than the quicker but less compelling use of DNA matching. Because of ineptitude and the lapse of time, there is no longer any physical evidence left and so the exploration of facts and motives is central to the unravelling of the plot. The re-examination of personal histories is also used to measure the impact of bullying on the victims. The references to the fallout from violence are a common feature in her novels and here it is seen to damage the lives of Jonathan, Howard and other main suspects.

This novel was followed by The Tinder Box (2004) and The Devil’s Feather (2005). Marilyn Stasio’s review of the latter novel notes how Walters’ work is laced with insights into the motivation for victimisation: ‘In The Devil’s Feather, she takes a theme that has figured in her work since her first novel, The Ice House - the streak of cruelty that weak and helpless people bring out in others - and applies it to the hot-button issue of wartime torture’ (New York Times, 27 August 2006).

Chicken Feed (2006), based on a murder in 1924, is a novella written for the Quick Reads initiative. This scheme is part of a government campaign which hopes to encourage adult reading and Walters won the Quick Reads Learners’ Favourite Award in 2006.

Since the publication of The Ice House, Walters has maintained her impeccably high standard and this is all the more impressive when one considers her prolific output. Her first five novels have been adapted for BBC television, which has undoubtedly helped to raise her profile further. Her writing is deserving of the acclaim she has received, as she continues to offer polished, contemporary crime fictions that leave the reader satisfied, whilst still allowing for moral ambiguity.