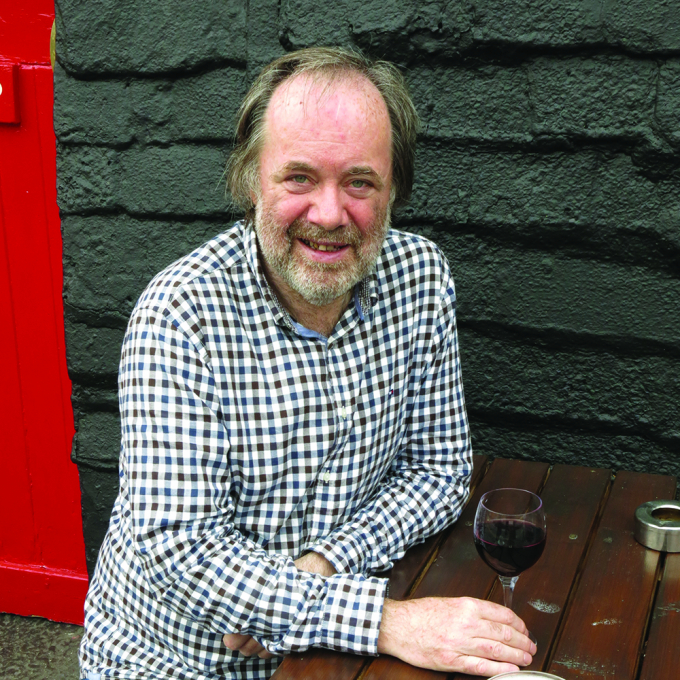 Matthew Sweeney was born in Donegal, Ireland in 1952.

He moved to London in 1973 and studied at the Polytechnic of North London and the University of Freiburg. His poetry collections include A Dream of Maps (1981), A Round House (1983), Blue Shoes (1989), Cacti (1992), The Bridal Suite (1997) and A Smell of Fish (2000). Selected Poems, representing the best of 10 books and 20 years' work, was published in 2002. He won a Cholmondeley Award in 1987 and an Arts Council Writers' Award in 1999. He has also published poetry for children, collections including The Flying Spring Onion (1992), Fatso in the Red Suit (1995) and Up on the Roof: New and Selected Poems (2001). His novels for children include The Snow Vulture (1992) and a new book, Fox (2002).Matthew Sweeney has held residencies at the University of East Anglia and the South Bank Centre in London, and was Poet in Residence at the National Library for the Blind as part of the 'Poetry Places' scheme run by the Poetry Society in London.

His latest poetry collections are Black Moon (2007) and a new selection of poems: The Night Post (2010).

Although he is a member of the second generation of the postwar flowering of Irish poetry (which also includes Paul Muldoon, Nuala ni Dhomnaill and Ian Duhig), Matthew Sweeney stands apart from the usual line of discussion by combining an inherited Irish interest in narrative with a lasting preoccupation with German literature, stretching from the Romantics to the twentieth century and including Kleist, Buchner, Trakl, Kafka, Huchel, Grass and Boll.

Furthermore, his work seems barely touched by the mainstream of English writing - witness firstly his lack of interest in history or class and secondly his highly individual adaptation of realism.Disliking the term 'Magic Realism', he has proposed the name 'Alternative Realism'. In this realm, the mundane world lies open to the proverbial, to the peremptory logic of folktale and to the possibility of nightmare derived from what Sweeney calls 'European darkness' exemplified by the Croatian-American poet Charles Simic (Sweeney keeps himself very well-informed about American poetry). 'The English language,' Sweeney writes in 'The Eagle', 'with all its facts/ Will not do. It is too modern.' In fact Sweeney can be read not just in the light of modernism, but of postmodernism too. The interest of his work lies partly in his insistence on the right to draw on the perennial resources of fable and story, with none of the merely self-regarding irony found in some postmodern writing.With Sweeney's third collection, The Lame Waltzer (1985), the poet's characteristic voice is in the process of emerging, divested of decorative features as well as (almost) of metaphor. Image, Latinate diction and literary allusion - all fundamental to English poetry - have little part to play in what follows. The result is a poetry of speech (stress-based rather than traditionally metrical) and seeming simplicity, full of pregnant vignettes, pretended or frustrated narratives in which enigmatic events or settings are approached either too soon or too late to yield their secrets. The funeral orgy in 'Cuba Street' has its protocols we will never learn, just as the reason for the submerged door in a canal will never surface and the sexual tension of 'Watches' exists separately from any defining context. The ostensible simplicity of the presentation, and a tone by turns teasing and oddly insistent, serve to confront the reader with a series of puzzling dramas. Events are charged with suggestiveness but tend to evade the normal frame of interpretive reference:'He yawns, climbs into his coffinonto stitched red satinand stretches his white toes.'Would you be a doll,' he whispersto a girl in a tubular dress,'and screw the lid down.And muffle that awful band.''Cuba Street'The effect is to usurp the privileges of prose fiction - without being burdened by its obligations as understood in the English tradition. Instead, the climate of the work owes something to Sweeney's Irish Catholic background - not only the air of mystery, but the sense of ritual and obsession, which in turn helps to create the verse's music (as do the frequent unsettling questions and commands). 'Pink Milk', from Blue Shoes (1989), shows this in the obvious setting of a monastery, but the secular world is equally in thrall. 'Symmetry' is spoken by a threatening dinner party host who cannot abide odd numbers: 'Gentlemen, you will please set that right.' The humour is characteristic - unrelenting, edgy, comfortless.Sweeney is capable of a deeper emotional charge. Two of his finest poems are harrowing elegies, 'Where Fishermen Can't Swim' and 'Tube Ride to Martha's', the one about the drowning of a young sailor in a needless accident on the Donegal coast, the other telling the last hours of an unwitting victim of the King's Cross Underground fire. In the brief 'The Women', Sweeney observes with brilliant economy the undeclared tensions of a drunken social evening: 'their laughs,/ their glasses raised,/ their mock dances to music/ on the wireless; and the men/.../ deep in chairs, watching.'In Cacti (1992) the rows, silences and continental distances of domestic life become central. In the title poem a man turns his house into a desert in hopes that his wife will return. In 'Asleep in a Chair' a man foolish enough to do this at home is to be tortured until he realises the error of his slumber. Central, too, is death: suicide, fratricide, undertakers, graveyards. This material extends into The Bridal Suite (1997), where 'The House' sets out, simply, with cumulative eloquence, the omnipresence and fascination of death in the speaker's childhood. The core of 'Alternative Realism' is perhaps the attempt to come to terms with this implacable, implausible, endlessly ingenious fact. In its way, Sweeney's grip on his subject is as rigorous as Heidegger's, with a similarly pitiless but bracing post-Catholic universe in view: 'An End' imagines a grave with a glass headstone. A Smell of Fish (2000), is a transitional work - not towards levity but a greater rhetorical expansiveness, including a translation from Dante's Inferno while also showing a more relaxed sense of play. In mid-career, Sweeney is a distinguished member of his generation, a highly recognisable stylist. His future direction is hard to predict, but it seems likely to produce poems as strange and compelling as his rich body of work to date.