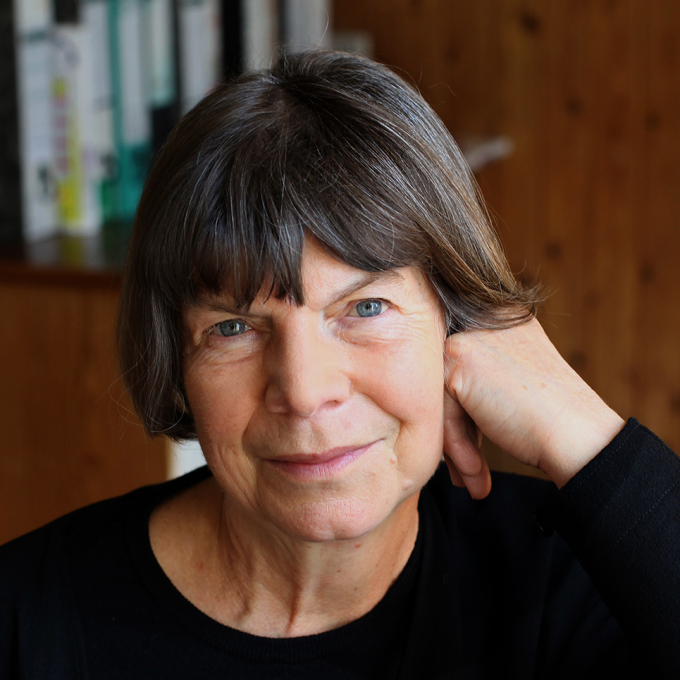 Novelist, biographer and critic Margaret Drabble was born in Sheffield on 5 June 1939.

She was educated at the Mount School, a Quaker boarding school in York, and read English at Newnham College, Cambridge. She became an actress and worked for the Royal Shakespeare Company at Stratford-upon-Avon before her first novel, A Summer Birdcage, the story of the relationship between two sisters, was published in 1963. Her other novels include The Garrick Year (1964), set in the theatre world; The Millstone (1965), winner of the Mail on Sunday/John Llewellyn Rhys Prize, in which a young academic becomes pregnant after a casual relationship; Jerusalem the Golden (1967), winner of the James Tait Black Memorial Prize (for fiction), about a young woman from the north of England at university in London; The Waterfall (1969), a formally experimental narrative; The Needle's Eye (1972), winner of the Yorkshire Post Book Award (Finest Fiction), the story of a young heiress who gives away her inheritance; and The Realms of Gold (1975), about a prominent archaeologist juggling the different aspects of her life. The Ice Age (1977) examines the social and economic plight of England in the mid-1970s while in The Middle Ground (1980) a journalist is forced to take-stock of her life.The Radiant Way (1987), A Natural Curiosity (1989) and The Gates of Ivory (1991) form a trilogy of novels describing the experiences of three friends living through the 1980s. The Witch of Exmoor (1996) is a portrait of contemporary Britain. The Peppered Moth (2001) explores four generations in one family beginning with Bessie Bawtry's childhood spent growing up in a South Yorkshire mining town at the beginning of the twentieth century. Candida Wilton, the central character in her novel The Seven Sisters (2002), begins a new life in London after the breakdown of her marriage. A surprise windfall gives her the opportunity to travel to Italy with friends and explore new experiences. Her most recent novel is The Sea Lady (2006). Margaret Drabble is also the author of biographies of Arnold Bennett (1974) and Angus Wilson (1995), and is editor of both the fifth (1985) and sixth (2000) editions of The Oxford Companion to English Literature.She is a former Chairman of the National Book League (1980-82), and was awarded the CBE in 1980. She received the E. M. Forster Award from the American Academy of Arts and Letters in 1973, and holds honorary doctorates from the universities of Sheffield (1976), Manchester (1987), Keele (1988), Bradford (1988), Hull (1992), East Anglia (1994) and York (1995).

Her latest books are the memoir, The Pattern in the Carpet (2009), in which she looks at her own life, the history of games and the delights of puzzling and A Day in the Life of a Smiling Woman (2011), a collection of short stories.

Margaret Drabble is married to the biographer Michael Holroyd and lives in London and Somerset. Her sister is the novelist and critic A. S. Byatt. In 2008 she was made a DBE.

Margaret Drabble is primarily known as an English novelist, but is also a critic and biographer.

Her first novel, A Summer Birdcage (1963), was quickly followed by the publication of The Garrick Year (1964). This latter text uses the setting of the theatre, but also examines the workings of a marriage, and this has become a common theme in her fiction.

As the winner of the Mail on Sunday/John Llewellyn Rhys Prize, her third novel The Millstone (1965) marks the beginning of her acceptance, in terms of awards, by the literary world. Its first sentence encapsulates the psychology of Rosamund, the first person narrator: ‘My career has always been marked by a strange mixture of confidence and cowardice: almost, one might say, made by it.’ She is an unmarried mother in England in the mid 1960s and the novel traces her experiences of pregnancy and early motherhood. This work typically relies upon intelligent humour and looks at a kind of Englishness that is stereotypically, yet recognisably, middle class. Rosamund’s reticence, and her fear of offending others, is connected to her social position and liberal upbringing. Although this novel is of its era in that it attempts to challenge taboos such as illegitimacy, Rosamund’s characterisation also suggests that the ‘swinging Sixties’ were a myth for many. Her lack of desire for sex is explained as being related to her, ‘being at heart a Victorian’ and her pregnancy is, ‘the Victorian penalty’.

Jerusalem the Golden (1967), which won the James Tait Black Memorial Prize (for fiction), was followed by The Waterfall (1969). The switch between first and third person throughout The Waterfall emphasises the anxiety of the central protagonist, Jane Gray. Jane’s detachment from her parents as a child and her later fear of intimacy alternates with her love for her cousin’s husband as an adult. The shift between the personal ‘I’ and impersonal ‘she’ evokes her emotional difficulties expertly. The sense of being adrift from others is also captured in the descriptions of her time at university: ‘ … I was always so afraid of being unable to return emotion that I never dared to arouse it.’ There is a constant re-negotiation of her irrational fears throughout the novel and this is mirrored in the shift in voices.

Joyce Carol Oates’ review of Drabble’s next novel, The Needle’s Eye (1972), is complimentary and offers a useful overview of some of her earlier work: ‘Each of Margaret Drabble’s novels has been an extraordinary leap forward: from the well-written, entertaining, but not disturbing The Garrick Year, to the moral ambiguities of The Millstone, to the rather strange, disturbing Jerusalem the Golden and its remorseless ‘survivor’, to the half-mad narrative of The Waterfall. Though I have admired Miss Drabble’s writing for years, I will admit that nothing she has written in the past quite prepared me for the depth and richness of The Needle’s Eye’ (The New York Times, 11 June 1972).

Drabble’s prolific writing continued into the 1990s with The Witch of Exmoor (1996), and this was followed by The Peppered Moth (2001). In general terms, The Peppered Moth is a fictional account of four generations of women. The main setting is South Yorkshire, in a town called Breaseborough, and the impact of education and high expectations on Bessie Bawtry and her family in the early twentieth century is portrayed as filtering down the generations. The peppered moth of the title is a clue to the novel’s focus on heredity and surviving (or not) by adaptation.

It is not until the Afterword, however, that the reader learns that Drabble has at least partially drawn on her mother for this largely unsympathetic portrayal of Bessie. Bessie becomes embittered by the restrictions imposed on her in early to mid 20th-century England. Because of her gender and class position, she is limited in her options despite studying at Cambridge and this is seen to infect her relations with her husband and children. The examination of antagonistic mother/daughter relationships recurs in many of Drabble’s novels, as does an interest in the problems that arise when a woman has been educated to higher education standard, so this is not the first occasion that autobiographical material has been used in her fiction. In this instance, though, the autobiographical connection is made obvious for the reader.

Drabble continues to write novels prolifically as is evidenced by the publication of The Seven Sisters (2002), The Red Queen (2004), which is set in 18th-century Korea and the present, and The Sea Lady (2006).

As well as writing numerous works of fiction, she is also a highly regarded biographer of Arnold Bennett (1974) and Angus Wilson (1995). In addition, she has also edited the informative and academically respected The Oxford Companion to English Literature (in 1985 and 2000, with the fifth and sixth editions respectively).

In conclusion, Drabble’s fictions may be read as her own particular chronicles of 20th-century England. Her contribution to contemporary English literature has been commended with various literary awards and a CBE in 1980. More often than not, her novels are, on the surface, gentle investigations into the thoughts and emotions of female middle-class Englishness. It should also be remembered that her prose is incisive and often cutting in its humour and insights. Furthermore, her characters are made recognisable because of the unflinching way that she reveals certain uncomfortable truths. Selfishness, insecurity and loneliness are often returned to, as is the difficulty of finding happiness in relationships.

'I sometimes ask myself whether I enjoy writing. The answer is yes, but a qualified yes. I only enjoy it when it's going well. Starting a new book is always hard work, and work that moreover for months feels pointless (why bother? why not do something else?) or ill-directed (why this subject? why not something more global, more domestic, less domestic?): I walk around, looking for plot, structure, characters, images, trying not to repeat or imitate or listen too much to the wrong voices. This is a dreary time, comfortless, irritable, unsatisfying. When the book begins to move, everything changes, and everything I see or hear or read seems to be part of, to contribute to the new pattern. This is exciting. It's the only time when I forget time. Past the half way mark, a novel almost writes itself. Events beget events, characters insist on seeing one another again, and I just sit and transcribe. I get quite cheerful and communicative. A strange process ...'