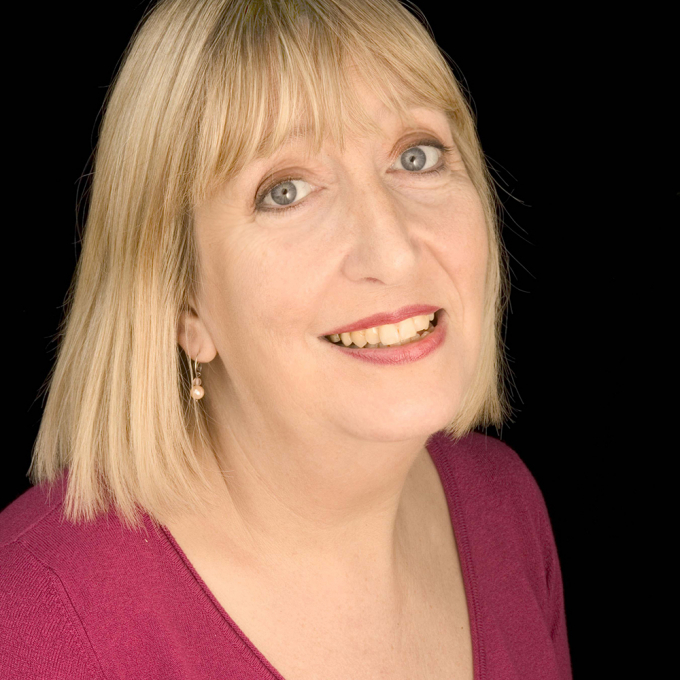 Lynne Truss is a writer and broadcaster.

She began work as a literary journalist, editing the Books section of The Listener, and as critic, columnist and sportswriter for The Times. She also wrote for Woman's Journal,  and for the Daily Mail and the Sunday Times, for which she regularly reviews books. In 1996 she was named Columnist of the Year for her work on Woman's Journal, and the following year, was shortlisted for Sportswriter of the Year for her work on The Times. She has written extensively for radio, including dramas, adaptations and short stories.

She has written three novels: Going Loco (1999); Tennyson's Gift (1996); and With One Lousy Free Packet of Seed (1994).  She also writes scripts and comedy series for BBC Radio 4, the latter including Acropolis Now and A Certain Age. She often presents and contributes to radio discussions and hosted Cutting A Dash, a series about punctuation which led to the writing of Eats, Shoots & Leaves: The Zero Tolerance Approach to Punctuation (2003). This book was a runaway success and surprise best-seller, and won the 2004 British Book Awards Book of the Year.

Talk to the Hand: The Utter Bloody Rudeness of Everyday Life (2005), is an analysis of manners in modern society. A Certain Age (2007) is a book consisting of 12 radio monologue scripts.

Lynne Truss lives in Brighton. Her most recent non-fiction book is Get Her Off the Pitch: How Sport Took Over My Life (2009), an account of her four years as a sportswriter. She has since written a novel for cat lovers, Cat Out of Hell (2014).

The sales phenomenon of Eats, Shoots & Leaves (2003), her witty self-help guide to punctuation, has recently transformed Lynne Truss, somewhat to her own surprise, into a high-profile author.

The book not only spent weeks at the top of the best-seller list but found itself being put onto students’ reading lists, and stimulated a national debate about apparently declining standards of grammar. Her new book also appears to have addressed a similar public anxiety, about the state of manners in contemporary life. The Times newspaper serialized Talk to the Hand: The Utter Bloody Rudeness of Everyday Life (2005), and Truss appeared at this autumn’s Cheltenham Literature Festival to talk about her subject. She had previously been noted mainly for her versatility and humour, working for magazines and for newspapers as a sports journalist, bringing a sardonic female viewpoint to bear, particularly on football and its characters. She was also literary editor at The Listener from 1986 to 1990, and has written comic novels and radio plays, while continuing to be a familiar voice on BBC Radio 4.

While at The Listener, she wrote humorous columns - ‘Margins’ - the best of which were collected in Making the Cat Laugh (1995). These are a mix of self-deprecation, literary asides, with a continual commentary on the satisfactions and frustrations of being single, and the freelance writing life itself. ‘The main advantage of working at home is that you get to find out what cats really do all day’ and ‘I always shout “Buns for tea!” when a cheque arrives in the post’. She portrays herself as ‘Teddywoman’ rather than ‘Catwoman’, delivering many slyly funny reflections on her reading habits and infatuations – with television programmes, Wimbledon tennis stars and films starring Jeff Bridges. We also learn about the perils of supermarket shopping, how to invite yourself to the Booker Prize dinner, and even ‘The Only Event of Any Importance That Ever Happened to Me’ (being stuck in a lift). Her beloved cats function as a perennial source of inspiration (‘I swore off caviare on Sunday night, the cats took it badly’), and the collection concludes with a cat’s eye view, ‘snoozing happily on my pet’.

In one of the columns, she remarks that ‘my favourite conversational topic is garden sheds’. Her first novel, With One Lousy Free Packet of Seed (1994), actually features a (male) freelance journalist who writes a celebrity ‘Me and My Shed’ column for a somewhat chaotic gardening magazine. The plot is a well-choreographed farce, sparked off by the takeover of the magazine by a teenage entrepreneur. Through various misunderstandings, the now-redundant staff all converge on the house – and the garden shed - of this week’s celebrity subject, a libidinous American television actress. There are slapstick incidents aplenty, accompanied by a stream of jokes, puns - and asides on grammar and language, lamenting that ‘life is not susceptible to sub-editing, by and large’. Another column happens to mention ‘Despair’, a work by the Victorian pioneer photographer Julia Margaret Cameron. The latter’s despairing efforts to persuade her neighbour Tennyson to pose, and the strange goings-on during July 1864 on the Isle of Wight, form the essentials of Tennyson’s Gift (1996). This is Truss’s best, funniest and most imaginatively accomplished novel, and few characters escape her affectionate debunking. The anxious Poet Laureate is protected from bad reviews by his long-suffering invalid wife, while unwanted gifts (including Elgin Marbles wallpaper) get in the way, as does the holidaying Charles Dodgson. The Alice in Wonderland manuscript he has brought with him provides dream-like interplay with the characters, and we also encounter painter G.F. Watts and his wife, actress Ellen Terry, ‘the Phrenological Fowlers’, as well as a fast-moving cast of crazed servants and precocious children. There are again some funny misunderstandings, of romantic and poetic kinds, and the action moves dangerously towards the cliff’s edge at Freshwater Bay.

Eats, Shoots & Leaves was actually a publisher’s suggestion, following on from her Radio 4 series ‘Cutting a Dash’, but Truss claimed that ‘despair’ was the initial stimulus for the book: ‘I saw a sign for "Book’s" with an apostrophe on it, and something deep inside me snapped’. She set out to rid the world of ‘this satanic sprinkling of redundant apostrophes’. The book’s success was surely due as much to it being chatty and informal, with a characteristic self-deprecating wit, as to its timely subject. Throughout, she mixes scholarly and historical background information with literary asides (‘Byron is a great master of the dramatic dash’). The introduction explains the vital role of punctuation in directing you how to read, ‘in the way musical notation directs a musician how to play’; there follow chapter titles such as ‘The Tractable Apostrophe’, ‘That’ll Do, Comma’, and ‘Airs and Graces’. There are again plenty of jokes and puns (‘I hear there are now Knightsbridge clinics offering semicolonic irrigation’) and well-chosen examples of idiosyncracies perpetrated by writers such as Gertrude Stein, G.B. Shaw, Beckett (‘he earned the right to be ungrammatical’), Salman Rushdie and Martin Amis. Along the way, we learn about the origins of italics, the correct uses of exclamation marks, inverted commas, the ellipsis, brackets, and the hyphen. She concludes by discussing the future of our language and its grammar, in the age of text messaging and the Internet. What the book essentially does is to make readers feel good about the subject, giving them a sense of empowerment and the permission ‘to love punctuation’. The important thing, she advises, is to ‘release your Inner Stickler’.

In Tennyson’s Gift, Fowler the American showman-phrenologist at one point tells his daughter: ‘we have a duty to behave with the very best of manners’. This nicely anticipates Truss’s concerns in Talk to the Hand (2005). It takes on the vexed subject of manners in modern society and suggests that rudeness is essentially a moral issue: ‘Rudeness is bad. Manners are good. It feels very daring to come out and say it, but I’ve done it and I feel better’. The book seems to have a more serious, even embattled air, as it discusses such everyday matters as intrusive mobile phone calls on trains, ‘aggressive hospitality’ in shops and from call centres, even ‘the universal eff-off reflex’. However, she claims optimistically, we can do something to help the situation. And ‘just as enough people going around correcting apostrophes may ultimately lead to some restoration of respect for the English language, so enough people demonstrating kindness and good manners may ultimately have an impact on social morality’. Lynne Truss, it appears, has turned out to be as much a moralist as she is a humourist.

2014
Cat Out of Hell
2009
Get Her Off the Pitch: How Sport Took Over My Life
2008
Twenty-Odd Ducks: Why, Every Punctuation Mark Counts
2007
The Girl's Like Spaghetti: Why, You Can't Manage Without Apostophes!
2007
A Certain Age
2005
Talk to the Hand: The Utter Bloody Rudeness of Everyday Life
2003
Glued to the Goggle Box: 50 Years of British TV with Freeze-Frames by John Minnion and a Rewind by Lynne Truss
2003
Eats, Shoots & Leaves: The Zero Tolerance Approach to Punctuation
1999
Going Loco
1999
Tennyson and his Circle
1996
Tennyson's Gift
1995
Making the Cat Laugh: One Woman's Journal of Single Life on the Margins
1994
With One Lousy Free Packet of Seed