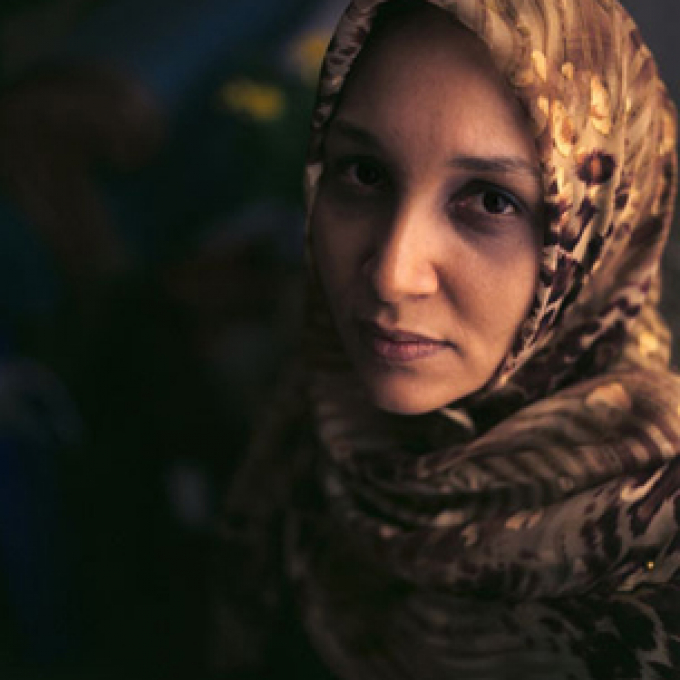 Leila Aboulela was born in 1964 in Cairo and grew up in Khartoum.

She studied for a degree in Economics at Khartoum University, then moved to England to obtain a Masters degree in Statistics at the London School of Economics. She worked as a part-time Research Assistant while starting to write.

She has had several short stories published in anthologies and broadcast on radio, and one of her short stories, ‘The Museum’, won the Caine Prize for African Writing in 2000. A collection of short stories, Coloured Lights, was published in 2001, followed by a second, Elsewhere, Home, in 2018, which won the award for Saltire Society's Fiction Book of the Year 2018.

BBC Radio 4 broadcast a five-part adaptation of The Translator in 2002, and a dramatisation of 'The Museum'. She has also had several radio plays broadcast, including The Mystic Life (2003) and The Lion of Chechnya (2005).

In her relatively short career, Leila Aboulela has established a significant reputation, winning several literary awards and receiving critical praise from two of Africa’s leading contemporary writers, Ben Okri and J.M. Coetzee. Both Okri and Coetzee applaud the quiet anger and restraint which typifies the prose of Aboulela’s first three works: The Translator (1999), Coloured Lights (2001) and Minaret (2005). The protagonist of The Translator is Sammar, a Sudanese widow living in Aberdeen and working for a Scottish academic. Rae Isles is a lecturer in Middle Eastern History and Third World Politics, and Sammar is translating the work of an extremist group for him. However, the question of translation transcends their working relationship in the book. Sammar is narrated in the third person, which means our access to her thoughts and motivations is always oblique, open to translation. Meanwhile the growing personal relationship between Sammar and Rae, like Sammar’s relationship with her local environment, is caught up within the fraught dynamics of mistranslation, untranslatability. When they first meet, Rae asks of her name "Do you pronounce it like the season, summer?". She replies "Yes, but it does not have the same meaning." At a later meeting in Aberdeen’s Winter Gardens, she wonders how she will translate her past to him. Back in Sudan, Sammar rejected her family in order to marry Tarig. The couple move to Scotland so that Tarig could pursue his medical studies, but he is killed in a car crash. As a result of this trauma, Sammar temporarily rejects their young son, who in turn rejects her.

The repressed dimensions of her past, and of the text, raise further issues of interpretation both for Rae and the reader, who is often placed in the role of analyst trying to translate the workings of Sammar’s unconscious from an external perspective. Tantalisingly, the novel opens with a dream:

"She dreamt that it rained and she could not go out to meet him as planned. She could not walk through the hostile water, risk blurring the ink on the pages he had asked her to translate. And the anxiety that she was keeping him waiting pervaded the dream, gave it an urgency that was astringent to grief."

Condensed in this passage (if we choose to translate it) are the discourses of romance and religion that saturate the novel as a whole. The relationship between Rae and Sammar progresses over the Christmas and New Year period. They talk repeatedly on the telephone, and once again the question of translation looms: their professional talk conceals personal desires. But when Sammar finally gathers the courage to ask Rae to convert to Islam, he hesitates, and they part company. Sammar leaves for Africa, but feels an exile at home and her feelings for Rae persist. On discovering through a third party that Rae has converted to Islam she decides to make contact: "She was going to write two letters in two languages. They would say the same thing but not be in translation." In this sense The Translator is less a novel about translation then it is a meditation on translation’s limits.

Significantly, her next novel, Minaret, opens with a string of untranslated words: "Bism Allahi, Ar-rahman, Ar-raheem." Divided into five sections, the novel shuttles between the mid-1980s, the early 1990s and the present, between Khartoum and London, as we follow the trials and tribulations of its protagonist, Najwa. Najwa’s family are members of the corrupt elite in Khartoum. As such, she makes a novel postcolonial protagonist: she prefers the material worlds of Marie Claire and Cosmopolitan to the political narratives she encounters at university. Even when Najwa’s crush on Anwar, a former member of the student Communist Party in Khartoum, is rekindled through a chance meeting in London, she remains a passive and naïve figure.

But things are set to change. Following a coup, her father is arrested and Najwa flees with her brother and mother to London. Living in drastically reduced circumstances she becomes a domestic hand and babysitter. In her spare time she attends the mosque having converted to Islam. However, this is not a story of straightforward conversion. As Mike Phillips notes in a review in the Guardian newspaper:

"Najwa's conversion is not an easy surrender to tradition. Instead it is a hard-won dedication to service, a kind of restitution for her former life, and the ending of the book is a disturbing hint that the peace she has achieved is contingent and subject to perpetual challenge.

In a narrative of complex reversals, Aboulela takes a huge risk in describing her heroine's religious conversion and spiritual dedication. She succeeds brilliantly. This is a beautiful, daring, challenging novel."

The experiences of contingency and uncertainty that pervade Aboulela’s novels also help explain her success and accomplishment as a short story writer, where curtailment, and brevity become positive formal qualities. In the title story of her collection, Coloured Lights, we have a nod to this formal impressionism in the splodges of primary colour that recur in references to "colourful posters" and clothes ("Wools, rich silks and satin dresses"), Christmas lights in London’s Regent Street, and the lights that decorate wedding houses in Khartoum. These colours converge in the consciousness of the narrator as she journeys home on a bus through London, all the time recollecting the tragic death of her beloved brother, Taha, who is electrocuted setting up the lights for his wedding. If within the logic of multiculturalism, coloured lights suggest an illuminating, and positively colourful, diversity, here they are associated with mourning, death and the deceptive surfaces of metropolitan capitalism: "The progress of the bus was slow in contrast to the shoppers who swarmed around in the brightly lit streets. Every shop window boasted an innovative display and there were new decorative lights in addition to the street lights." The narrator prefers the darkness between the lights in much the same way Aboulela prefers to dwell on the gaps between languages: "The English word 'homesick' is a good one; we do not have exactly the same word in Arabic."

Like Minaret and The Translator, Coloured Lights deals with questions of cultural misunderstanding and mistranslation. In her prize-winning story, ‘The Museum’, an unlikely relationship develops between Shadia, a wealthy visiting student from Khartoum, and Bryan from Peterhead, Scotland. Both are studying for an MSc in Statistics, both from marginal, ‘unknown’ locations beyond each other’s immediate reality. Despite the charming association that emerges between them, and which culminates in a visit to a Scottish museum exhibiting ‘Africa’, Bryan can’t understand Shadia, and Shadia can’t understand Bryan. The coloured lights of Aboulela’s collection share a fragile proximity that gives off a temporary warmth, but they never ultimately join up. Like all her works to date it dwells on the synaptic spaces between languages, words, images, identities and cultures.

When I write I experience relief and satisfaction that what occupies my mind, what fascinates and disturbs me, is made legitimate by the shape and tension  of a story. I want to show the psychology, the state of mind and the emotions of a person who has faith. I am interested in going deep, not just looking at 'Muslim' as a cultural or political identity but something close to the centre, something that transcends but doesn’t deny gender, nationality, class and race. I write fiction that reflects Islamic logic; fictional worlds where cause and effect are governed by Muslim rationale. However, my characters do not necessarily behave as ‘good’ Muslims; they are not ideals or role models. They are, as I see them to be, flawed characters trying to practise their faith or make sense of God’s will, in difficult circumstances.