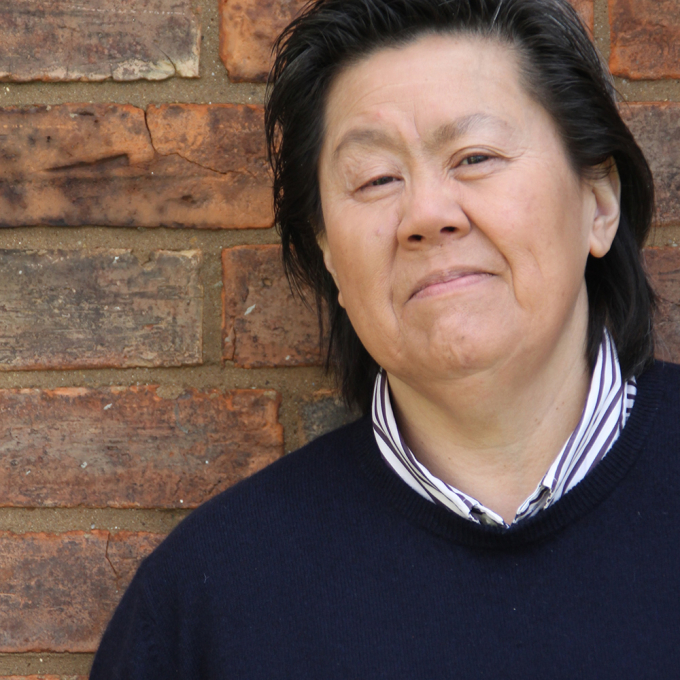 Kerry Young is a British novelist born in Kingston, Jamaica, to a Chinese father and mother of mixed Chinese-African heritage. She came to England at the age of ten.

She is the author of two novels, Pao (2011) and Gloria (2013), and her writing has been nominated for the Costa First Novel and Commonwealth Book Prize.

Young has Master’s degrees in organisation development and creative writing, and a PhD in youth work. She is a Buddhist whose interests include Tai Chi, weight lifting, golf and tenor saxophone.

She is a reader for The Literary Consultancy, a tutor for the Arvon Foundation and a Fellow on the Royal Literary Fund Fellowship Programme where she is writer-in-residence at The University of Sheffield.

Young also teaches creative writing as an Honorary Assistant Professor in the School of English at The University of Nottingham, and Honorary Creative Writing Fellow at the University of Leicester.

In two well-received novels of a projected trilogy, Kerry Young’s historical fiction has illuminated neglected and poorly understood chapters in the story of the Chinese diaspora.

Her fiction has been praised for combining family history, deep research and the expressive power of patois. By doing so, it brings the global realities of Chinese identity to life. And she celebrates the underappreciated impact of Chinese culture on the modern Caribbean, making a powerful case for a new understanding of Jamaican urban life.

Young has said that sees herself as an inheritor of the works of other hyphenated Chinese writers such as Maxine Hong Kingston and Han Suyin. And like those writers, she is committed to unraveling the complexity of the global place of Chinese emigrants. “I'm interested,” she states, “in where we went, what we've done, the lives we've made.”

Her debut novel, Pao (2011) began in the Kingston, Jamaica of 1938, and told the story the fourteen year-old Yang Pao. Newly arrived from China following after his father’s death in the fighting for the revolution, he comes under the spell of Zhang, the ‘godfather’ of Chinatown, whose protection business controls the city’s Chinatown, and whose tales of glorious Chinese socialism captivate his young mind. Pao takes over the family’s affairs and becomes a key figure in local gang and business life, and is torn between lovers from within and beyond the community.

The book amounts to a social and political history of Jamaica covering the period from 1938 to the early 1990s at the end of the second Michael Manley administration. Young tells the story through a series of brief episodes in which Pao struggle for fulfilment and power in a violent society. Throughout, she sprinkles useful context into the narrative, keep the reader informed of Jamaica's developing history. It reaches a particularly crisis point as political violence escalates in the 1960s and the roles of socialist, gangster and family man come into conflict for the novel’s hero.

One of the most striking features of the book was its reliance on Sun Tzu’s Art of War. This ancient Chinese manual of military strategy gives shape to the sometimes-fragmented series of events in Pao’s rise and fall. Ideas such as the wisdom of fighting wars without giving battle help pattern the action and to emphasise the themes of a enterprising and proud minority, holding firm under constant attack from mainstream Jamaican life.

Critics were positive about both the unique subject matter, and the ways in which it was handled. To the Observer, its key strength was its recovery of a forgotten history. Ian Thompson wrote that “Pao celebrates a vanished world. Jamaica's Chinatown disappeared when Kingston railway station closed in the early 1990s. Few Chinese businesses operate there now; the old shops are boarded up or else serve as crack dens. Pao, meanwhile, confirms Young as a gifted new writer. Her novel is a blindingly good read in parts, both for its mesmeric story-telling and the quality of its prose.” Similarly, the Independent praised the ways in which “foregrounding Pao's personal travails against Jamaica's complex and deep-seated conflicts gives panoramic depth to this punchy tale of pungent characters and impassioned entanglements.”

Within the Asian literary community, these aspects of the novel were also celebrated. In the Asian Review of Books, Peter Gordon observed how “hyphenated-Asian fiction has become a genre unto itself, but the non-Asian side of the hyphen is usually American, British or Australian. This time, unexpectedly, it’s Jamaican.” For the reviewer, the freshness of this setting meant that it was possible to overlook some issues of characterization, since “the book is well-paced and the end comes so quickly and smoothly that one never realizes that Pao is perhaps a bit too good to be true and that the book never really develops much in the way of dramatic tension … Altogether, Pao is a lively, pungent and colorful novel with the added advantage that it.” (Peter Gordon, Asian Review of Books). The novel was shortlisted for the Costa First Novel Award 2011 and the Commonwealth Book Prize 2012,

Young’s follow-up Gloria (2013) returned to the same events, but inventively flipped them to narrate them from a female perspective. Here the focus turned to Gloria Campbell, a black Jamaican who is sixteen as the novel opens, and whose traumatic recent past has led her to a new life with her family in Kingston. This strong female lead and her gradual political awakening provided the novel’s centre of gravity. Through the figure of Gloria, Young offered a fresh and revealing perspective on the events of Pao, and the borders between criminality and respectability. And as with that former novel, though in perhaps a less tightly structured manner, Gloria combined historical specificity and linguistic colour to make an argument for social justice in a changing Jamaica.

As with the comparable experiments in perspective in the Iowa novels of Marilynne Robinson, the decision to shift genders was mostly effective. The Birmingham Post praised it as “a brilliant, observant, sometimes complex read, but with clear and simple messages, it speaks to the feminist and equal rights campaigner in all of us.” However, some felt that the novel didn’t quite capture the same energies and surprise as its predecessor. “Young’s commitment to exploring the lot of Jamaican women over three tumultuous decades is admirable,” noted the Daily Mail, “but the Moll Flanders-like brio of Gloria’s opening chapters fades over the course of nearly 400 pages”

Young is currently completing a third novel that will complete a Kingston trilogy. In this forthcoming work, currently titled Fay, the central character will shift to Fay Wong, Pao’s wife, the daughter of a prominent Chinese businessman. As Young tell us,

Fay is of mixed heritage. She is also wealthy, well educated, middle-class and light-skinned. So she has to reconcile the comfort of her relatively privileged life with the poverty, misery and anguish she sees all around her. She has to face her guilt. But Fay has also suffered, particularly in her relationship with her mother and her sense of betrayal.  She is a lost spirit in search of peace and redemption.

This story will complete the circle of rich and vivid evocations of a time and place. And will hopefully allow Young to continue to act as insightful chronicler of forgotten histories and the people that made them.