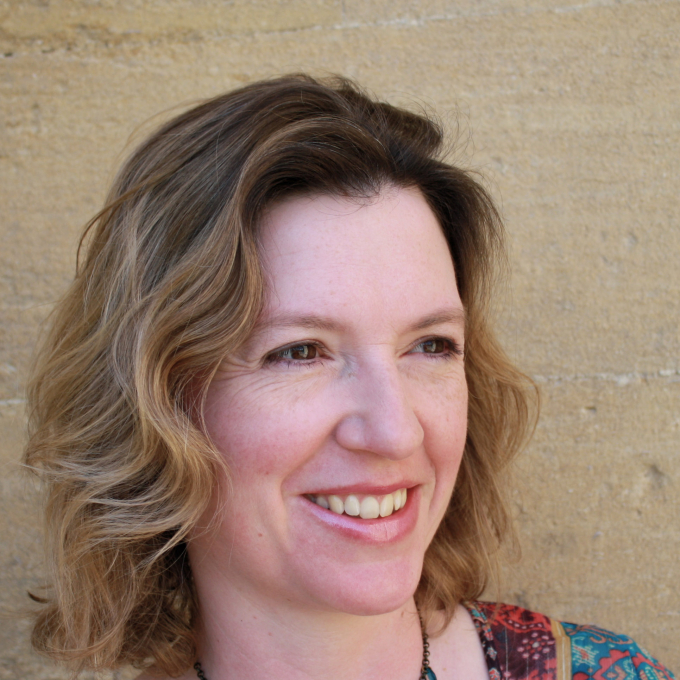 Julia Golding was born in 1969 and grew up near Epping Forest.

She studied English at Cambridge University, then joined the Foreign Office and worked in Poland, before returning to Oxford University to study for a doctorate in literature of the romantic period.  She worked for Oxfam, lobbying on conflict issues, before becoming a full-time writer.

Her first book, The Diamond of Drury Lane (2006), is the first in a series of 'Cat Royal' books, about the adventures of an orphan girl brought up in a theatre in Georgian London. It won the Waterstone's Children's Book Prize, and the Nestlé Children's Book Prize in 2006, and was also shortlisted for the Costa Children's Book Award. Further books in this series are: Cat Among the Pigeons (2006); Den of Thieves (2007); Cat o Nine Tails (2007): and Black Heart of Jamaica (2008). The sixth book in the series, Cat's Cradle, is due to be published in 2009.

Her 'Companions' series, a fantasy series with a cast of mythical creatures, comprises of: Secret of the Sirens (2006); The Gorgon's Gaze (2006); Mines of the Minotaur (2007); and The Chimera's Curse (2007). The ‘Companions’ series continues with Water Thief (2011), in which George, the youngest universal, is assisted by the rudest goblin in existence.

Her series of fantasy adventure novels, Young Knights of the Round Table (2013), set in Oxford and Avalon, features schoolchildren battling dark forces with Arthurian legendary figures. It continues with Pendragon (2013) and Merlin (2014).

She lives in Oxford and has three children.

In the first of Julia Golding’s newest and most ambitious series of fantasy adventure novels, Young Knights of the Round Table (2013), three teenage foster-children settle uncomfortably into their new school in Oxford, beset by bullies with ‘stomach-churning habits’. Yet Rick, Roxy and Tiago’s strangeness and unfamiliarity with modern life has an explanation: they are undercover ‘feygents’ sent by King Oberon and Commander Morgan le Fey to investigate a series of ‘major magic malfunctions’ which threaten the realm of Avalon. Trying out their wits and spellcraft, their superior knowledge of ‘feysics’ and ‘mythmatics’, they’re assisted by animal familiars and find a friend in the wheelchair-bound Lynette. Elderly don Professor Marmaduke tells them about the Ring of dark power at the heart of Oxford. They must fulfill the mission but also find out their true identity. They must decide whose side they are on: humanity or the Fey.

As an author for teenage readers, Julia Golding is both prolific and various, with several series of books of differing types. For instance, Darcie Lock is the ‘Girl on the Run’, tomboy heroine of spy thrillers dealing with contemporary international issues such as terrorism, arms smuggling and drugs conspiracies.

She writes historical fiction equally well. In Wolf Cry (2009), Freydis is sole survivor of a raid on her settlement, her world being that of violent late-9th Century Norway, where warlike Vikings pursue blood feuds, demand tribute from peaceful Sami people and take rare African slaves, or ‘blue men’. By contrast, young David Jones is disturbed by his father abruptly leaving home and dreams about the model pirate ship his grandfather helped him build.

In The Ship Between the Worlds (2007) David finds himself press-ganged onto ‘The Golden Needle’ and embarking upon an amazing voyage of danger and discovery through time and space.

But by the author’s own admission her favourite character remains her first: ‘Cat Royal’ of Drury Lane, who often engagingly addresses the ‘Dear Reader’. The curtain rises on her adventures in the late-18th Century Regency period, as Catherine Royal has been raised in the Theatre Royal of R.B. Sheridan and John Philip Kemble (who make cameo appearances in her stories, as do the Prince of Wales and other luminaries). An orphan who has ‘no idea who my parents were’, Cat depends for protection upon her friends, notably violinist Pedro (an escaped slave) and boxer Syd Fletcher. And she needs protecting, not only from constant threats or hazards, but also from the attentions of gang leader Billy Shepherd who threatens to slit her throat – or kiss her. Her debut performance, The Diamond of Drury Lane (2006), shows Cat in danger of hanging, framed for the theft of a valuable jewel.

Cat Among the Pigeons (2006) is equally theatrical, its plot-twisting drama consequent upon the efforts of vicious slaver Kingston Hawkins to reclaim ‘his property’, that is, Pedro. Then Cat has to take refuge in Westminster School, disguised as the aristocratic Thomas Hengrave (with some very funny scenes): ‘Ladies, you should know that being a boy is very complicated’. After many scrapes and fights, she enlists the help of Abolitionists in a desperate attempt to save Pedro from being transported back to slavery. Cat finds herself on the way to the Caribbean in Cat O’ Nine Tails (2007), press-ganged along with Syd, Pedro, and Lord Frank. Blown off course to America, Cat jumps ship and is adopted by Creek Indians, only to be tracked down by the ship’s sadistic purser. As ever, Cat’s travails reveal her stubborn independent streak. She declares herself ‘ready to risk everything to live as me’. There are projected to be nine Cat Royal novels (because a cat has nine lives). One hopes so; they delightfully combine swashbuckling action with nice historical details - and serious subjects.

Around the same time as the Cat novels Golding also began to write her ‘Companions Quartet’, in which the modern world of industrial technology and eco-warrior protestors co-exist with a secret ‘Society for the Protection of Mythical Creatures’. This is fantasy fiction with an ecological theme. The first book has sirens threatening an oil tanker spill, the second a gorgon and tree-felling; later on, minotaurs and a chimera. Teenage Connie Lionheart is a Universal Companion, that is, able to form bonds with all mythical creatures but especially dragons. As The Gorgon’s Gaze (2006) opens, she is forced to move in with her disapproving Aunt Godiva and practice subterfuge to learn her supernatural skills. Her schoolfriends soon rally round to help her protect Mallins Wood and its fearsome yet vulnerable creatures. The problem is: Kullervo, Connie’s shape-shifting enemy, who is intent upon an ultimate battle between the creatures and humanity.

Golding’s previous careers were as a diplomat and then an international aid worker. She draws upon her knowledge of contemporary political issues for the novels featuring Darcie Lock. By the conclusion of Ringmaster (2007), Darcie has exposed arms smugglers operating in Africa but been severely injured. She finds out that her mother and father are spies for the CIA and MI6 respectively and, as a rebellious teenager, ‘wanted to punish her parents for lying to her’. In the sequel Empty Quarter (2008), her British grandfather is a senior MI6 official who arranges a luxury Nile cruise for her to recover – and keep an eye on the wild child daughter of the President of the United States. When they and several other teenagers are kidnapped by Egyptian terrorists, Darcie has to use all her survival skills, Accompanied by her SAS friend Stingo - and a nice vein of humorous cynicism - Darcie sets out to save the hostages. And stay out of the clutches of the CIA.

Julia Golding’s storytelling art is wonderfully adept at keeping readers engaged as her teenage characters confront the endless hazards at the hands of bloodthirsty pirates, Vikings, 18th Century villains, mythic creatures, the Fey, shape-shifting demons – or even the strange things their parents do. Her imagination impresses us; but so does her ethical concerns. Fast-moving, dangerous though sometimes comical as the action is, all her fiction suggests that friendships and family relationships are more important than magical powers.

I write to tell stories.  When a novel is underway, it is a big event for my family, with each instalment read that evening.  Very often when I come to the end, I'm asked 'what happens next?' and the exciting thing is - I DON'T KNOW!  The answer has to wait for the next morning, when I am back at my computer to shine a light into the darkness that is the future of my characters.  Sometimes I feel powerful, controlling their destinies; on other occasions, my characters seem to run away from me and the story plunges on in a direction I did not foresee - an exhilarating, white-knuckle ride when I'm not sure where we'll come to a stop.  That's why I write.

@jgoldingauthor What did you think of Persuasion 2022. What Would Jane Do? Podcast tackles the subject! #PersuasionNetflix https://t.co/DcakeeLwKE
(2 months ago)

@jgoldingauthor RT @gwjschenk: I enjoyed chatting to the author @jgoldingauthor at the @Centre4Fantasy about #KingArthur, magic swords, and 10 years of the…
(4 months ago)

@jgoldingauthor @EmiEleode Love that film! Thanks for the Cat comparison!
(4 months ago)

@jgoldingauthor RT @Centre4Fantasy: As the Platinum Jubilee celebrations continue in the UK and the Commonwealth, we have highlighted the top 10 fantasy ro…
(4 months ago)