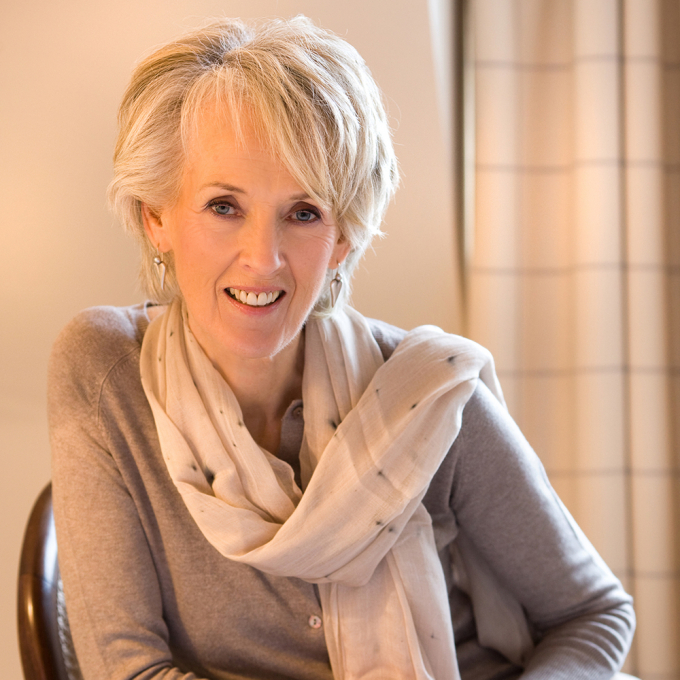 Novelist Joanna Trollope was born on 9 December 1943, and was educated at Reigate County School for Girls and St. Hugh's College, Oxford. She worked for the Foreign Office (1965-7) and held various teaching posts (1967-79), before becoming a full-time writer. She is the author of  bestselling contemporary novels, including Girl from the South (2002), the story of an American Southerner who takes a job in London to escape the family and social pressures of her home in South Carolina. Brother & Sister (2004), is a story which explores the themes of adoption, loyalty and the nature of identity.

Joanna Trollope is also the author of several historical novels (published under the name of Caroline Harvey) and of a study of women in the British Empire entitled Britannia's Daughters (1983). Her books have been translated into over twenty-five languages. The Choir (1988), A Village Affair (1989), The Rector's Wife (1991) and Other People's Children (1998) have all been made into series for television.Joanna Trollope is a member of the same family as Anthony Trollope, author of The Barchester Chronicles. She was awarded an OBE in 1996 and lives partly in London and partly in Gloucestershire, for which county she was made a Deputy Lieutenant in 2002. Her recent novels include The Other Family (2010) and Daughters-in-Law (2011), The Soldier's Wife (2012) and Balancing Act (2014), the latter an exploration of family relationships through four women working in a family business.

Joanna Trollope has long suffered the dubious title of 'Queen of the Aga Saga'.

The Aga Saga is a term used (often disparagingly) to describe popular literature about people who live in middle-class, middle England, where the Aga, a particular make of cooking stove, is a characteristic feature. It is true that Trollope's main characters are usually middle class, normal people, living unexceptional lives; it is also true that her novels are set in central England, in the area often known as the Shires, although her locations vary considerably from London, to urban Oxford and from the West Country to the farmlands of the Wye Valley on the borders with Wales, not to mention a number of foreign locations. What is not true, contrary to the opinion of many of Trollope's critics, is that because her books rush to the top of the best-seller lists as soon as they are published, her work is lightweight in content or shoddily written.

Trollope chooses as her subject matter the universals of human experience: birth, death, love, loss, anger, pain, fear, jealousy, joy, poverty, despair and the fear of change, but she roots these in an environment that is quintessentially English. She displays a love for architectural description, for gardens, plants and landscape that are a characteristic of much English writing. Somewhere at the beginning of each of her novels there is always a description of the building(s) where the main characters live. The description of James Mallow's rather ramshackle house in Oxford from The Men and the Girls (1992), for example, is typical: 'It was his house. He had bought it nearly thirty years before, long before the carelessly built Victorian area of Oxford, called Jericho, had risen from a near slum to gentility. It was a low double-fronted red house with a Gothic doorway and wide sash windows edged in blue-and-yellow brick … and James loved it'.

There are few British institutions that are left undissected by Trollope's steely scalpel. The Church of England is exposed for its petty church politics in The Choir (1988), and its inhuman treatment of its ministers and their families in The Rector's Wife (1991) and the English Village, a supposed Eden dear to the hearts of many an Englishman, is revealed in many of her novels, notably The Rector's Wife and A Village Affair (1989) as a cruel hotbed of hypocrisy and intrigue. Even the romantic rural idyll of the farmer's life is painfully described in Next of Kin (1996) - perhaps Trollope's darkest, most serious and mature novel - as a lifetime of sacrifice, uncertainty and debt.

Likewise, social institutions and relationships - marriage, sexuality, parenthood, the generation gap, growing old and sibling rivalry are the basis of her plots, and are rooted not only in their physical environment but also their historical context. Reading Trollope's novels gives one the strong impression that she has her finger firmly on the pulse of contemporary Britain, indeed, a historian looking back to study the main social preoccupations of the 1980s and '90s and the early years of this century would learn a lot about how the power structure between men and women, and within the family, was changing during these years. The Family is a central preoccupation, but it is the late twentieth century family with its shifting relations that Trollope is mainly concerned with. Father/son relations come under scrutiny in A Passionate Man (1990), mother/daughter relations in Next of Kin, The Men and the Girls and numerous others, as do forms of secondary parenthood such as adoption (in Next of Kin) and being a step-parent (in A Passionate Man, Marrying the Mistress (2000)and Other People's Children (1998). Sex features quite often in the novels, but Trollope's attitude towards it is neither prudish nor sensationalist. She sees sexuality as a subject of scrutiny in that it symbolises strong feelings between individuals and for the sensations of unease it creates in those around those individuals. Middle-aged sex and a relationship between a widow and her deceased husband's son (A Passionate Man), lesbian sex (A Village Affair) and that between a man and woman who, along with their spouses have been friends for decades (The Best of Friends, 1995), the girl who moves in with her best friend's recently bereaved father (Next of Kin) and many other delicate amorous situations are treated with sensitivity, elegance and wisdom - not as scandalous incidences of lust, but as part of the human need for warmth and understanding.

One of Trollope's favourite themes is misconceptions between couples - she is particularly deft at describing how a relationship can be perfectly happy but can slip, almost imperceptively, due to external circumstances, into disaster. Archie and Liza in A Passionate Man experience such a slip when he falls in love with his father's widow and she becomes infatuated with a younger colleague. Kate and James's relationship comes to grief in The Men and the Girls when Kate realises she is bored by her older partner and seeks independence, agreeing to temporarily leave her teenage daughter with her ex-partner (a highly unorthodox 'new family' situation). Things end badly for Kate and James's relationship. Liza and Archie, however, grow from their experience and manage to save their marriage; giving the book a satisfyingly happy ending.

The happy ending is another feature that leads some critics to think that Trollope's work is not 'serious'. Such a generalisation is wrong, firstly because, though all Trollope's novels involve change and personal growth and often, a positive view of the future, it is a simplification to say they end 'happily'. Secondly, it raises a question that Trollope herself has often asked - does writing have to be hard and grim to classify as literature?

Trollope's style is elegant, poised and seemingly effortless. It is common for her to have several points of activity going on at the same time in her novels - Girl from the South (2000), for example, is set in Charleston, South Carolina and London and A Spanish Lover (1993) vacillates between Seville and a house in the village of Langworth - yet she moves from one scene to another with confident smoothness. Her dialogue is simple and direct and often very funny. One of my favourite pieces of dialogue comes in the playful, irreverent conversations in The Men and the Girls, between the ageing, ailing (and probably very frightened and vulnerable) Uncle Leonard and the Chinese cleaning lady who has recently escaped from her violent husband: 'Leonard was very happy. He adored the days Mrs Cheng came ''Where's my coffee? It's ten past eleven. What does Kate pay you for … ?" "I paid double," she said,  "to put up with you." '

Because the family is at the centre of her plots, her novels are often populated by children of different ages (not to mention family pets) and she has a good ear for the way a child's language as well as his behaviour changes according to his age. She understands a child's awakennng interest in the lavatorial and their dialogues often abound with a cheerful vulgarity.

Her characters are the type of people you might bump into in the High Street, normal people, neither good nor evil, often making mistakes, faced with decisions they are uncertain about and sometimes breaking out of the mould. It is obvious that, though Trollope has rich imagination, a wonderful adeptness with plot and, as she herself points out, does a lot of research for her novels, she triumphs above all because she writes about the environment in which she lives and about people that she knows well. As her great grandfather Anthony Trollope said, 'the novelist's task is to make his readers so intimately acquainted with his characters that the creations of his brain should be to them speaking, moving, living human creatures. This he can never do unless he know these fictitious personages himself, and he can never know them well unless he can live with them in the full reality of established intimacy'. I think it is right to say that Joanne Trollope, writing as she does about the class and environment in which she lives, has that intimacy her great grandfather so admired, and that thousands of her grateful readers would agree with me.